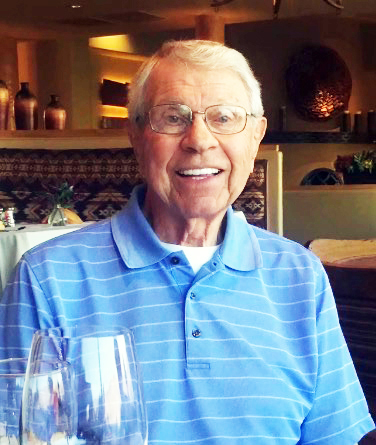 Robert Dusek 1930–2020 San Carlos, CA—Robert F. Dusek, 89, of San Carlos, California, died Sunday, January 5, 2020. A memorial service will be held on Saturday, January 25th, 2020, at the Brick-Meger Funeral Home at 11:00 AM with visitation one hour prior to the service. Interment will be at the Bohemian National Cemetery in Owatonna. Military Honors will be provided by the Steele County Funeral Unit. Bob was born November 20, 1930 in Owatonna, Minnesota to Fred and Mary (Kubat) Dusek. He graduated from Owatonna High School with the class of 1948. After high school he served on active duty in the US Navy for one year and 5 years in the Naval Reserves. While in the Reserves he started working at Jostens, the beginning of a 35-year career. Bob married Zanobia Miller September 15, 1951 at Holy Trinity Catholic Church in Litomysl, rural Owatonna. They were married for 68 years and raised 3 children. In 1960 Jostens transferred him to start up a plant in Shelbyville, Tennessee where he was plant manager. In 1965, he transferred again, this time to Porterville, California to build another plant and expand operations within the Scholastic Division. By 1974, Bob was promoted again and relocated to the executive offices in Minneapolis. He had a very long and successful career retiring at the age of 55 only to then embark on his own business, Dusek Enterprises. In 1994, Bob and Zanobia moved to Tucson, Arizona. They tried the snowbird way of life but decided to take up permanent residence in Arizona, living on a golf course with beautiful views of the Catalina Mountains, enjoying retirement with lots of travel and golf. In 2017 they moved back to California to be near family. Bob loved golf, travel, being outdoors, snow skiing, astronomy and reading. During his retirement in Tucson, he was active in the community and the Catholic Church as a Eucharistic minister. He is survived by his wife, Zanobia, daughters; Sheila (Tom) Snyder of San Carlos, CA, Jeanie (Kent) Klueter of Mission Viejo, CA, and son, Charles (Kim) Dusek of Shakopee, MN.; grandchildren, Gianna (Jeff) Miller, Talia Fusaro, Dane Dusek, Cullen Dusek, Quentin Klueter, and Sophia Klueter. He was preceded in death by his parents; brothers, Albert Dusek, George Dusek, and sister, Martha Stursa. In lieu of flowers, donations may be sent to the Alzheimer's Association in his memory. For more information or to leave an online condolence message go to www.brick-megerfuneralhome.com