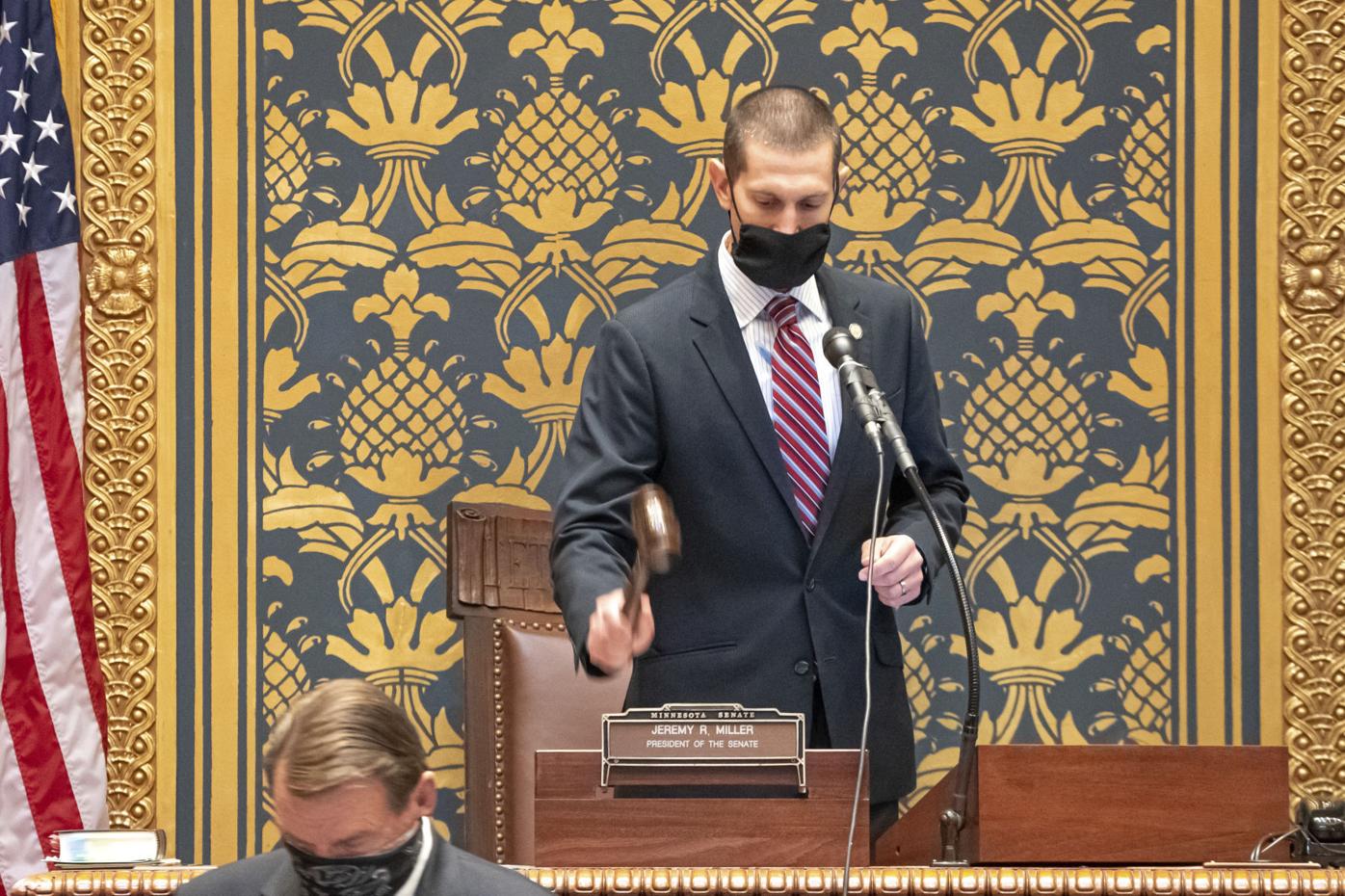 Senate President Jeremy Miller, R-Winona, adjourned the Senate until audio problems could be resolved for the start of the fifth special session of the year in St. Paul, Minn., on Monday, Sept. 12, 2020. The special session was called to review Gov. Tim Walz’s emergency coronavirus powers. (Glen Stubbe/Star Tribune via AP) 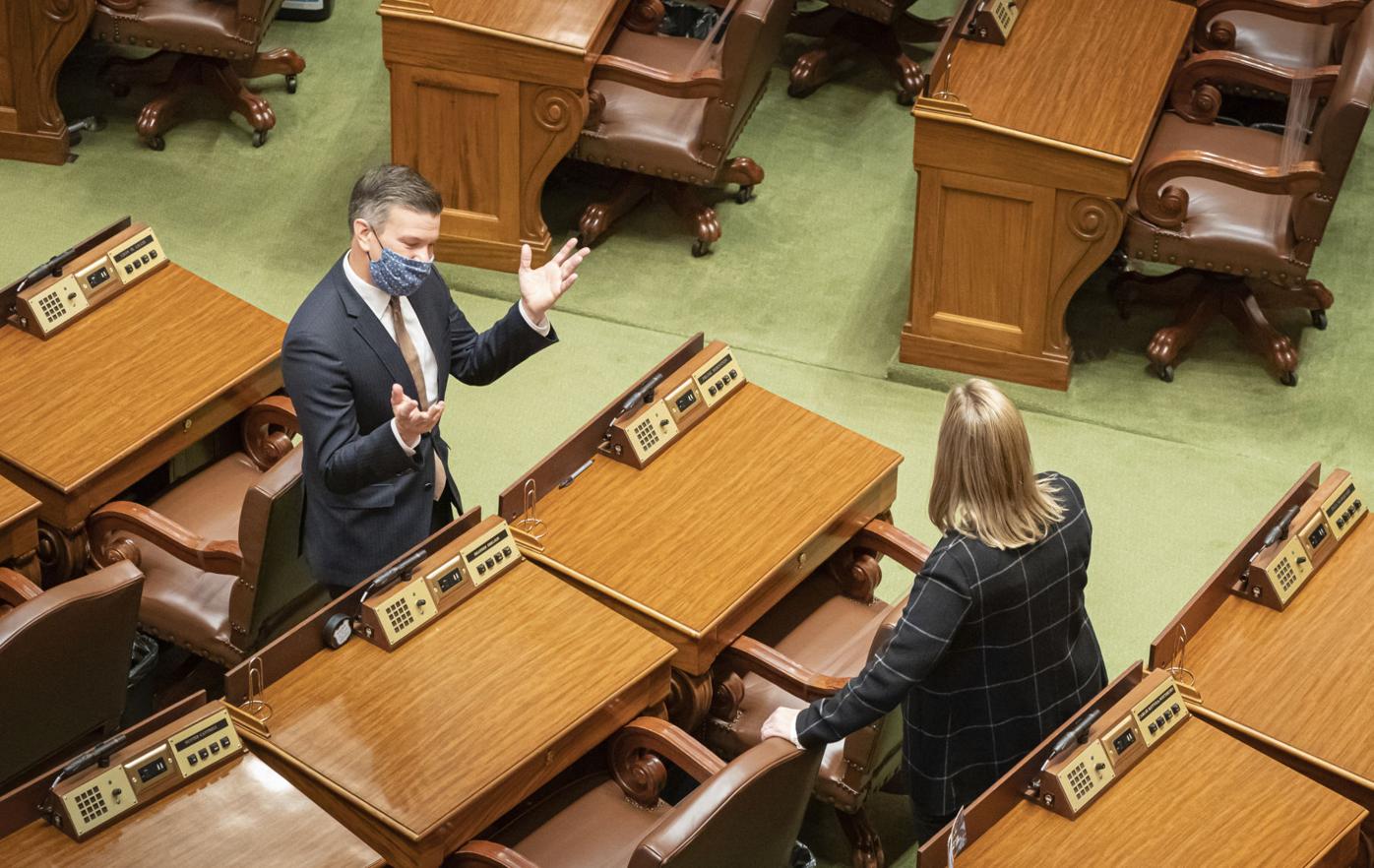 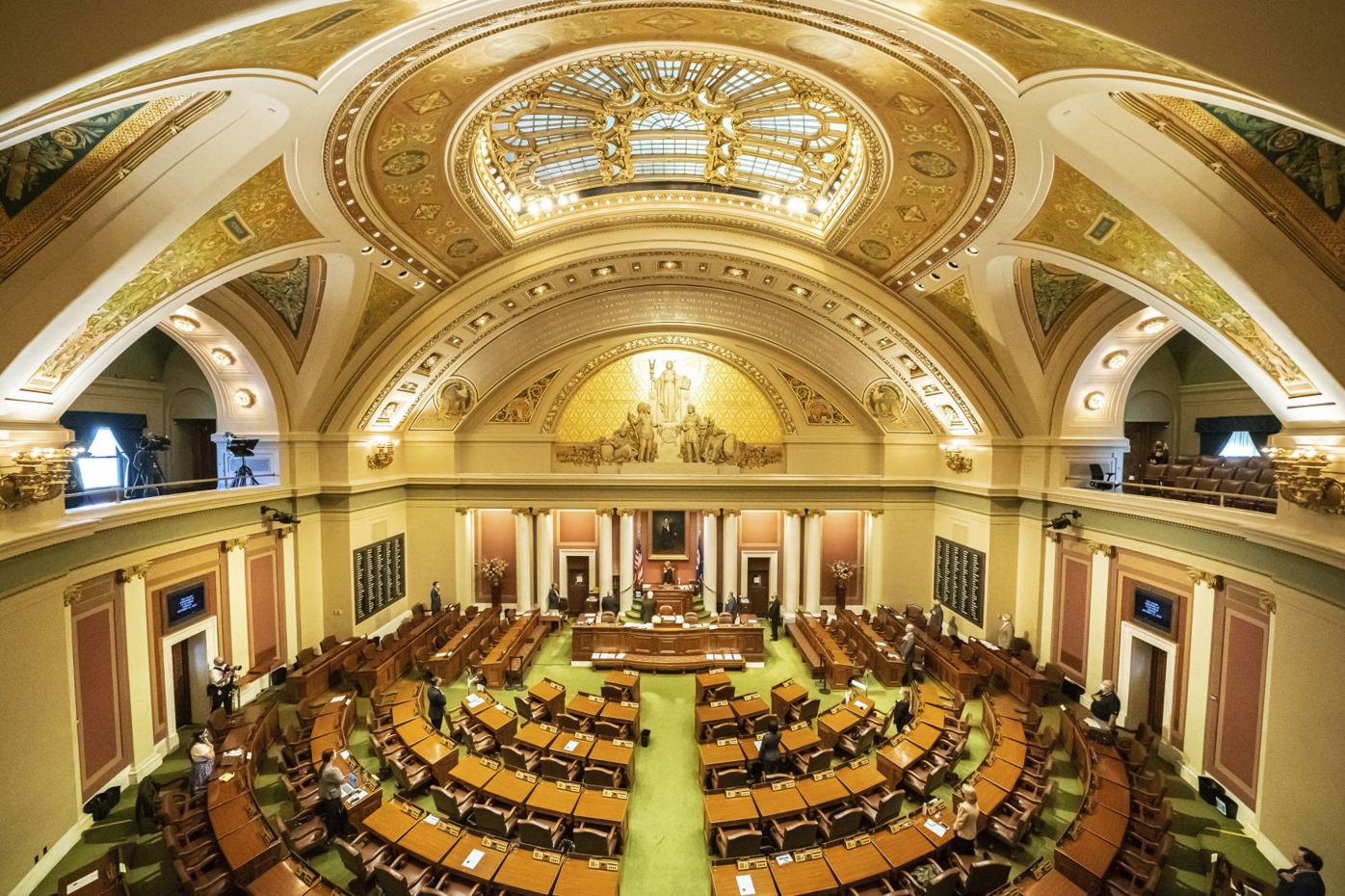 With most legislators working remotely, members present on the House floor stand for the Pledge of Allegiance in St. Paul, Minn., on Monday, Sept. 12, 2020. (Glen Stubbe/Star Tribune via AP)

Senate President Jeremy Miller, R-Winona, adjourned the Senate until audio problems could be resolved for the start of the fifth special session of the year in St. Paul, Minn., on Monday, Sept. 12, 2020. The special session was called to review Gov. Tim Walz’s emergency coronavirus powers. (Glen Stubbe/Star Tribune via AP)

With most legislators working remotely, members present on the House floor stand for the Pledge of Allegiance in St. Paul, Minn., on Monday, Sept. 12, 2020. (Glen Stubbe/Star Tribune via AP)

MINNEAPOLIS (AP) — Minnesota House Democrats on Monday delayed a vote on a $1.37 billion public works construction package in the hopes of securing the six Republican votes they would need to pass the long-delayed legislation and provide some economic stimulus during the coronavirus pandemic.

As the House and Senate prepared to convene their fifth special session of the year, Democratic House Speaker Melissa Hortman, of Brooklyn Park, told reporters that she was confident of getting the 60% supermajority needed to pass the package, commonly known as a bonding bill. But she conceded that she didn’t have the 15 GOP votes that would have been needed to suspend House rules and rush the bill through on Monday, so she postponed the vote until Wednesday.

“We have spent months and months trying to get the entire House GOP minority on board, and I think we’re at a point where we have enough minority members on board to pass the bill on Wednesday,” Hortman said.

The bonding bill is the biggest piece of unfinished business left over from the 2020 regular session, where work was slowed by the pandemic before lawmakers were constitutionally required to adjourn in May. The House GOP blocked two attempts to pass it during earlier special sessions, and this session is considered the last chance for the year.

But Senate Majority Leader Paul Gazelka, a Republican from East Gull Lake, disputed that they had a deal on all the details.

“There is not an agreement on the bill — yet.,” Gazelka said in a statement. “The important things in this bill, about $200 million in tax relief for main street and farmers, $700 million for road and bridges, and $300 million in wastewater treatment are being put in jeopardy by additional amendments, conversations, and backroom antics we are not a part of.”

Democratic Gov. Tim Walz called the special session last week as he announced his intent to extend the emergency authority he has used to respond to the pandemic for 30 more days, which he did Monday. He’s required by law to call special sessions when he does that while the Legislature stands adjourned. That gives lawmakers the chance to rescind his orders if both chambers agree, but House Democrats have blocked all GOP efforts to do that.

House Minority Leader Kurt Daudt, a Republican from Crown, recently dropped his longstanding demand to cancel the governor’s emergency powers in exchange for the necessary votes on the bonding bill. But as a new condition, Daudt called for budget cuts to offset the costs of servicing the new debt so that it doesn’t enlarge the state’s projected budget deficit.

The bonding bill would finance $1.87 billion in public infrastructure projects statewide once other funding sources are counted. The House version also includes some new spending, including money to keep correctional facilities in Togo and Willow River open. It also includes a provision Republicans have long sought that would bring the state into conformance with a federal business tax break for new equipment purchases, which would help stimulate the economy. By law, borrowing bills must originate in the House.

At a Senate hearing on the bill, the governor’s budget commissioner, Jim Schowalter, said passing it would fund needed investments and allow state leaders to focus on the pandemic and the resulting budget challenges.

Hortman said she would continue to work to find a compromise with Daudt. But she said she believes the bill contains enough projects that are important to Republicans to split off enough votes even without his approval.

“In a potentially recessionary environment, it’s critically important that we provide this stimulus to Minnesota’s economy,” Hortman said. “And this is really thousands of jobs — it’s architecture jobs, it’s engineer jobs, it’s construction workers, electricians, carpenters, people who use heavy equipment. And for these communities, it will really be a boost to have these projects underway.”

Medford School Board: Where do the candidates stand?

There are four open seats on the Medford School Board. Candidate Betsy Chambers did not respond to the questionnaire. Read more