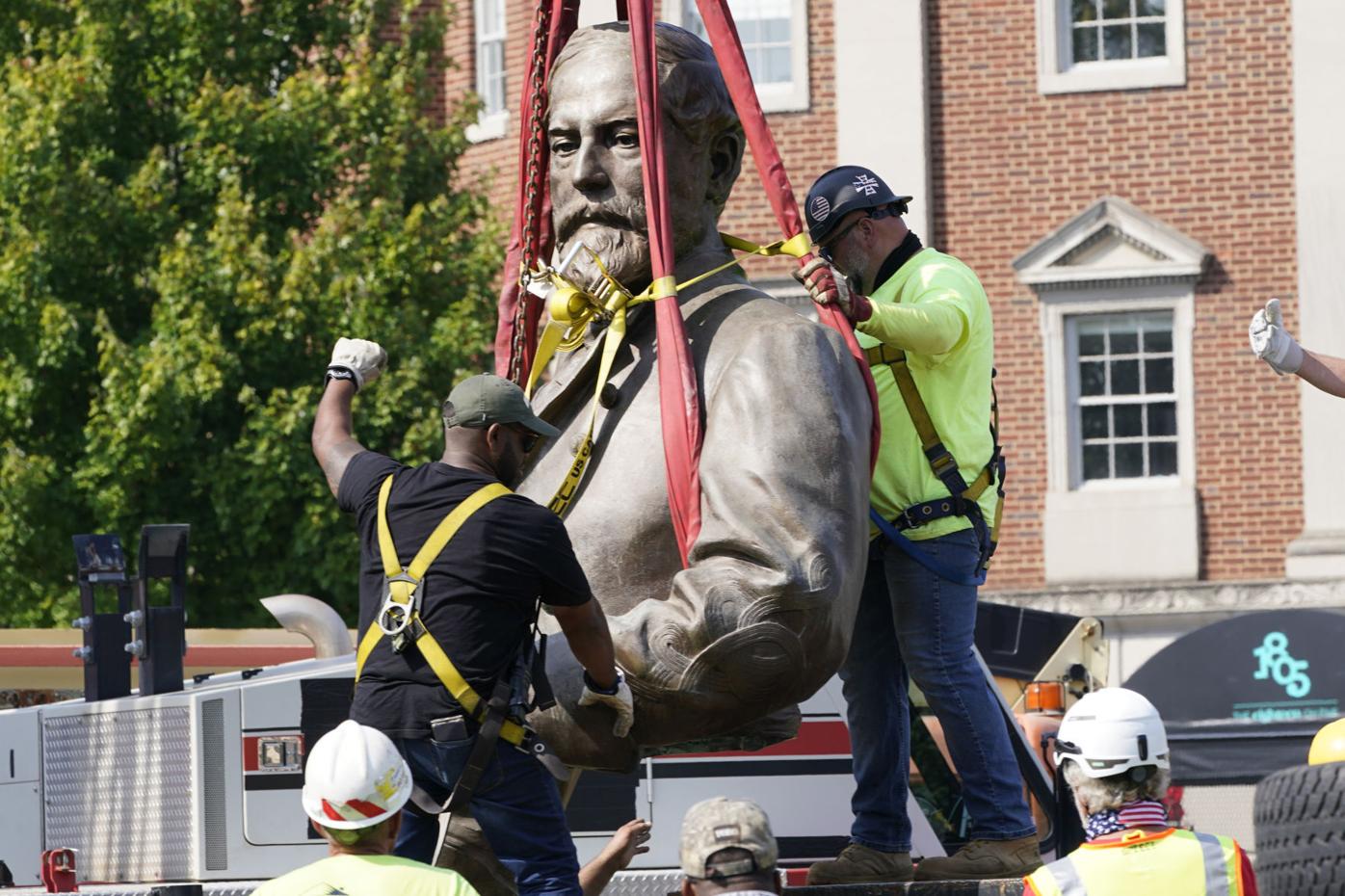 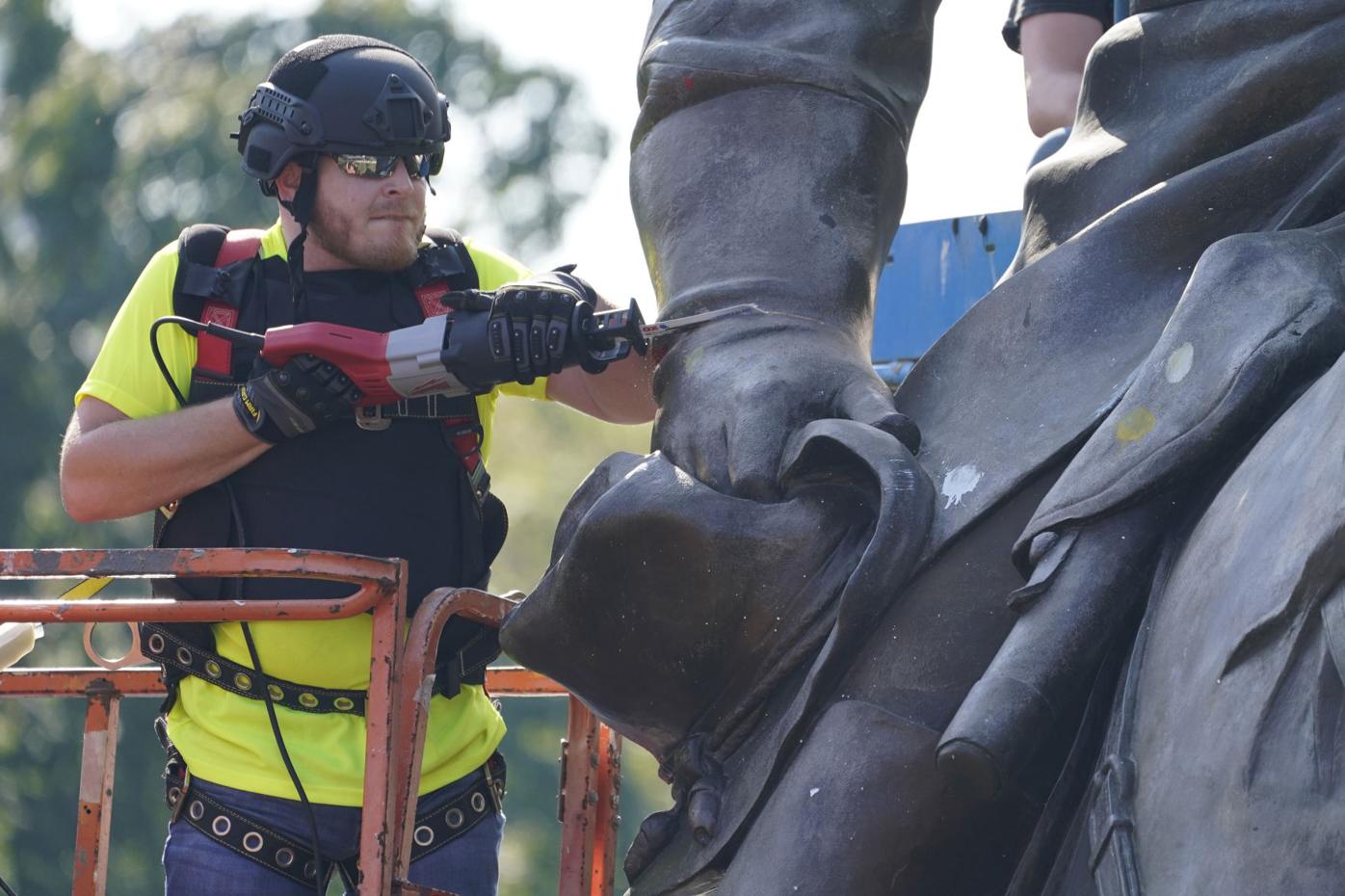 Crews use a saw to cut the statue as they remove one of the country’s largest remaining monuments to the Confederacy, a towering statue of Confederate General Robert E. Lee on Monument Avenue in Richmond, Va., Wednesday, Sept. 8, 2021. (AP Photo/Steve Helber) 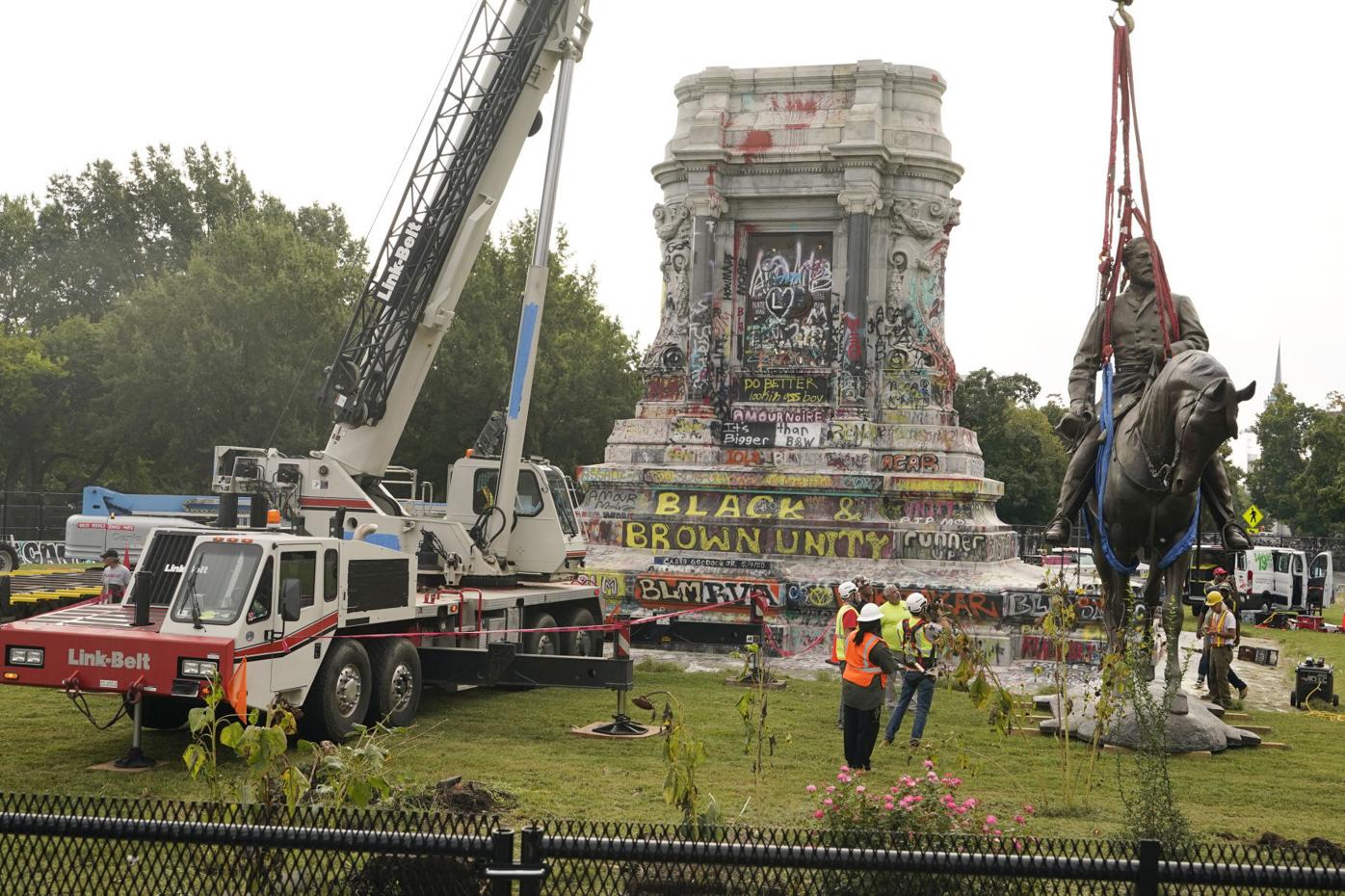 Crews use a saw to cut the statue as they remove one of the country’s largest remaining monuments to the Confederacy, a towering statue of Confederate General Robert E. Lee on Monument Avenue in Richmond, Va., Wednesday, Sept. 8, 2021. (AP Photo/Steve Helber)

RICHMOND, Va. (AP) — A statue of Gen. Robert E. Lee that towered over Richmond for generations was taken down, cut into pieces and hauled away Wednesday, as the former capital of the Confederacy erased the last of the Civil War figures that once defined its most prominent thoroughfare.

Hundreds of onlookers erupted in cheers and song as the 21-foot-tall bronze figure was lifted off a pedestal and lowered to the ground. The removal marked a major victory for civil rights activists, whose previous calls to dismantle the statues had been steadfastly rebuked by city and state officials alike.

“It’s very difficult to imagine, certainly, even two years ago that the statues on Monument Avenue would actually be removed,” said Ana Edwards, a community activist and founding member of the Virginia Defenders for Freedom Justice & Equality. “It’s representative of the fact that we’re sort of peeling back the layers of injustice that Black people and people of color have experienced when governed by white supremacist policies for so long.”

Democratic Gov. Ralph Northam ordered the statue’s removal last summer amid the nationwide protest movement that erupted after the murder of George Floyd by a police officer in Minneapolis. But litigation tied up his plans until the state Supreme Court cleared the way last week.

Northam, who watched the work, called it “hopefully a new day, a new era in Virginia.”

“Any remnant like this that glorifies the lost cause of the Civil War, it needs to come down,” he said.

The 21-foot (6-meter) bronze sculpture was installed in 1890 atop a granite pedestal about twice that tall. The sculpture was perched in the middle of a state-owned traffic circle, and it stood among four other massive Confederate statues that were removed by the city last summer.

A construction worker who strapped harnesses around Lee and his horse lifted his arms in the air and counted, “Three, two, one!” to jubilant shouts from the crowd as the crane prepared to wrest the statue away.

Some chanted “Whose streets? Our streets!” and sang, “Hey, hey, hey, goodbye.”

Once the statue was on the ground, the crew used a power saw to cut it in two along the general’s waist, so that it could be hauled under highway overpasses to an undisclosed state-owned facility until a decision is made about its future.

The job was overseen by Team Henry Enterprises, led by Devon Henry, a Black executive who faced death threats after his company’s role in removing Richmond’s other Confederate statues was made public last year. He said the Lee statue posed their most complex challenge.

Within hours, the pieces were gone. They were hauled away on a flatbed truck to cheers from the remaining crowd and claps of thunder from a midday storm. The pedestal is to remain for now, although workers are expected to remove a time capsule from the structure on Thursday.

The work proceeded under a heavy police presence, with streets closed for blocks around the area, but no arrests were reported, and no counter protesters emerged.

Those who opposed the statue’s removal often noted it’s artistic significance and Virginia’s centrality to the Civil War. They argued that taking the statues down would amount to erasing a key part of the commonwealth’s history. As recently as several years ago, key government officials argued for keeping it in place.

After a rally of white supremacists in the city of Charlottesville erupted into violence in 2017, other Confederate monuments started falling around the country. But at the time, local governments in Virginia were hamstrung by a state law protecting memorials to war veterans. That law was amended by the new Democratic majority at the Statehouse and signed by Northam, allowing localities to decide the monuments’ fate as of July 1, 2020.

Del. Delores McQuinn, a Democrat whose district includes Richmond and who sponsored the 2020 war memorial legislation, said she used to avoid driving on Monument Avenue because she found the statues so offensive. Seeing Lee come down Wednesday was “surreal,” she said.

“The fight, the struggle ... hopefully some of the ancestors feel vindicated,” said McQuinn, who is Black and has been an outspoken advocate for a better telling of Richmond’s Black history in public spaces.

State Sen. Jennifer McClellan, who represents Richmond and lives in the neighborhood, said the idea of the removal had long felt “impossible,” though that began to shift after Floyd’s murder, when the area around the statute became a hub for the growing protest movement and saw occasional clashes between police and demonstrators. The pedestal has been covered by constantly evolving, colorful graffiti, with many of the hand-painted messages denouncing police and demanding an end to systemic racism and inequality.

“I physically felt in the air hope, if that makes sense, because I saw multigenerational, multiracial people chanting to take it down and demanding change,” said McClellan, who is Black.

The changes to Monument Avenue have remade the prestigious boulevard, which is lined with mansions and tony apartments and is partly preserved as a National Historic Landmark district.

Northam, who after a 2019 scandal involving a racist photo in his medical school yearbook pledged to spend the rest of his term addressing Virginia’s racial inequalities, has tapped the Virginia Museum of Fine Arts to lead a community-driven redesign for the whole avenue.

Christy S. Coleman, executive director of the Jamestown-Yorktown Foundation and the former president and chief operating officer of the American Civil War Museum in Richmond, said she saw Wednesday’s removal as a historical moment in the city’s long-running struggle with how to tell its history.

That effort “is perfectly normal for communities to do — question who and what they are, what they value and how they want those values to be reflected, not only in the landscape, but in its laws,” she said.