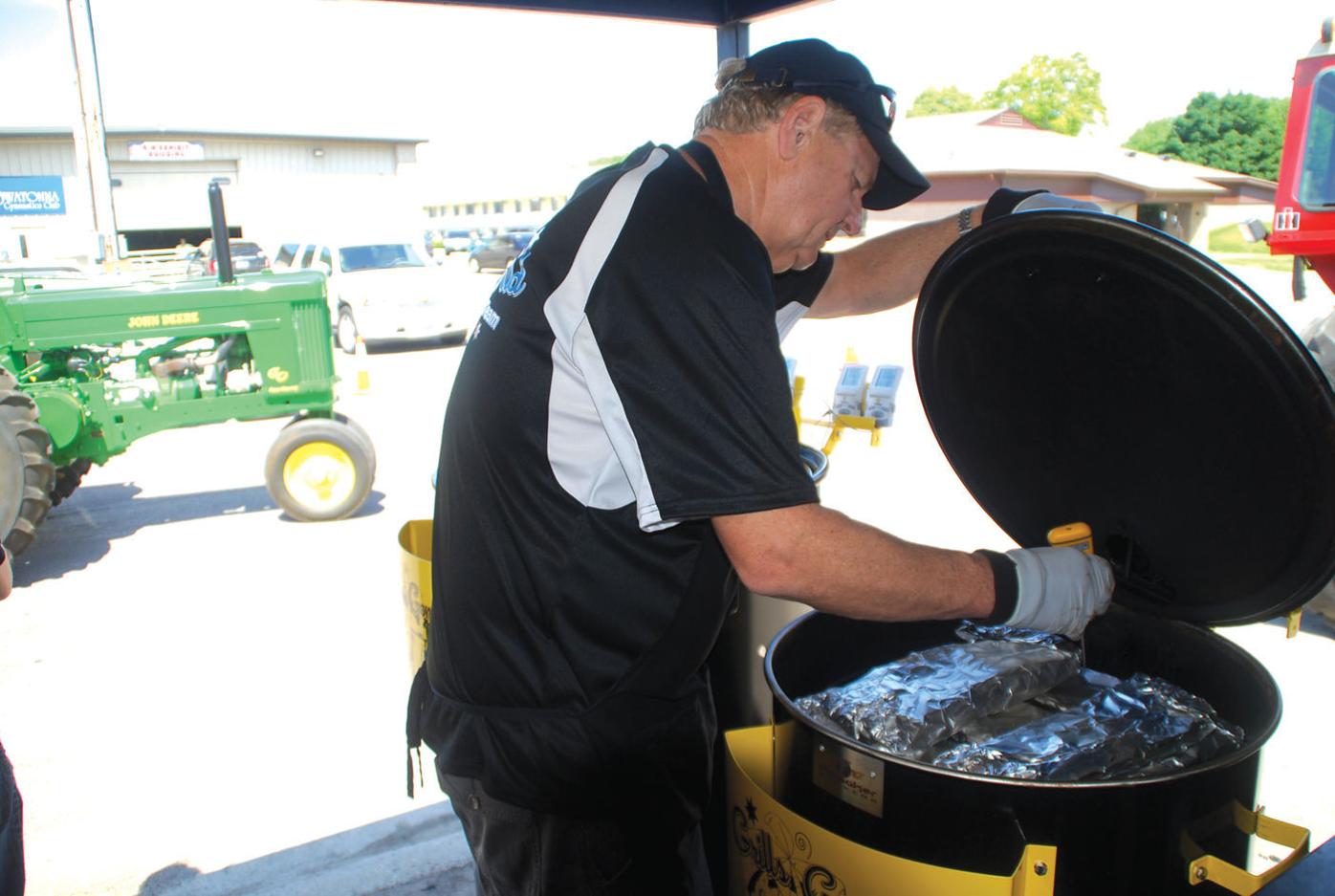 Smokin’ in Steele will celebrate a 10-year anniversary next weekend, and as usual, the barbecue competition will be a major element of the proceedings. The event is sanctioned by the Kansas City Barbecue Society, and the winner gets a spot in the annual Great American Cookout in K.C. (Press file photo) 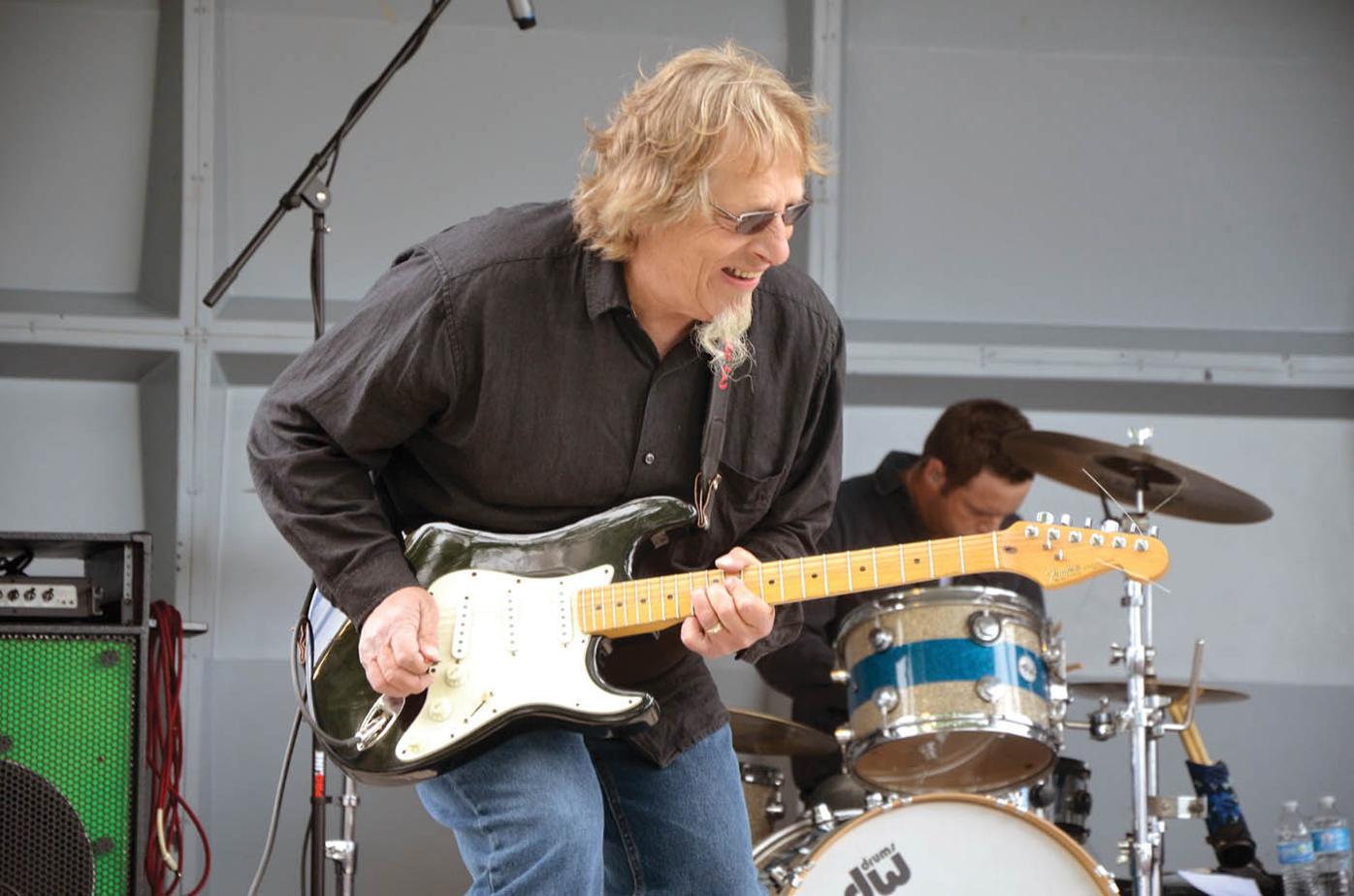 Musical acts slated to play Friday include the Shawn Murphy Band and Jeremiah Johnson Band, while Saturday’s slate includes Harrison Street, Mississippi Bigfoot, Southern Avenue, and the Mark Cameron Band. Some of the performances will be outdoors and free, while others will be in the beer garden, but a $10 wristband buys one access to all the Blues throughout the weekend. (Press file photo)

Smokin’ in Steele will celebrate a 10-year anniversary next weekend, and as usual, the barbecue competition will be a major element of the proceedings. The event is sanctioned by the Kansas City Barbecue Society, and the winner gets a spot in the annual Great American Cookout in K.C. (Press file photo)

Musical acts slated to play Friday include the Shawn Murphy Band and Jeremiah Johnson Band, while Saturday’s slate includes Harrison Street, Mississippi Bigfoot, Southern Avenue, and the Mark Cameron Band. Some of the performances will be outdoors and free, while others will be in the beer garden, but a $10 wristband buys one access to all the Blues throughout the weekend. (Press file photo)

OWATONNA — The Smokin’ in Steele BBQ & Blues Festival next weekend will, of course, feature copious amounts of barbecue and music, but also several other events, from a 5K fun run and family bike cruise to a hot rod car show and big rig display.

The festival, celebrating its 10th year, is presented by the Knights of Columbus Council 945, and it’s a charitable endeavor, said John Hammer, who publishes the blues-centric magazine Blue Monday Monthly, hosts a Blues radio show, and is a key coordinator for Smokin’ in Steele. While several charities benefit, the main one is the Special Olympics.

“We wanted to pick a charity that touches a lot of lives,” Hammer said.

As the festival has grown, so too have the charitable contributions.

Judging for the annual barbecue competition will take place Saturday, but of course, the 60 or so teams expected this year will arrive early Friday, as it’s “a slow cook that takes hours and hours of preparation,” Hammer said. The event is sanctioned by the Kansas City Barbecue Society, and the winner gets a spot in the annual Great American Cookout in K.C.

“It’s a huge deal, like the Grammy’s of barbecue,” Hammer said. “There’s a whole culture of folks who do this.”

There will also be a steak cook-off competition Friday night, which began in 2016 as a way of giving BBQ competition contestants something to do while their BBQ cooks, Hammer said.

“The steak competition is fairly quick, and it gives people another opportunity to compete,” he said.

The Steele County Fairgrounds open at 11 a.m. Friday, and “we invite the community in” to sample food from the various vendors, he said. Later Friday, music begins at 4:30 p.m. in Park Square.

That show is free, but the Beer Garden concerts start at 5:30 p.m. Friday, he said. All the music in the beer garden is not free, but a $10 wristband covers individuals for all shows the entire weekend.

A total of 13 bands are booked for the weekend, he added. “The bigger names will be in the Beer Garden,” but folks can also take advantage of the free outdoor music.

The festival “keeps growing every year,” and “we play [in it] every year,” Cameron said earlier this winter. “Minnesota has great blues festivals, and we’re making a play to make (Owatonna) a music town.”

No doubt, the interaction with audiences at blues festivals like Smokin’ in Steele is “what makes live music live music,” and blues aficionados “can spot fakes a mile away,” he added. “It has to be real, but if it is, they love that.”

The festival also appeals to youth with opportunities like the Blues for Kids harmonica lessons, which “we’ve been doing since inception,” Hammer said. Michael Fugazzi has always been the one teaching the clinic, and he’s a perfect fit, as he’s an adroit harmonica player, but he also has a wealth of experience dealing with children, as he’s an elementary principal in St. Paul.

The 30-minute session Saturday at 1:30 p.m. is first-come, first-serve, and “we can accommodate up to 40,” Hammer said. Each child receives a harmonica they can learn to play on and then take back home with them.

Fugazzi also plays the festival as a performer, so he understands well what makes Smokin’ in Steele special, Fugazzi said. “Honestly, it is always super fun. I love BBQ and music, (and) I get to spend all day checking out amazing food and bands.”

Fugazzi has known Hammer for years, and Hammer “was instrumental in my early success in music when I moved to the area, and (he) was always finding ways to support my then band, NiteRail,” said Fugazzi, principal of Lincoln Center Elementary, part of South St Paul Public Schools. “He originally got me in touch with the Minnesota Blues Society and their Blues 4 Kids program, where I began volunteering to teach occasional group harmonica classes.”

Fugazzi started playing harmonica 12 years ago, when he was 22, “which, by all accounts, is very late to take up an instrument,” but “I vividly remember seeing the music video to Blues Traveler’s ‘Runaround’ in the ‘90s, (and) I was instantly enthralled by his playing,” he said. “I made my younger brother give me his allowance and we took the city busy to the mall to by the CD.”

Years later, while singing in a college band, the guitar player “tricked” Fugazzi into purchasing his first harmonica, he said.

“My love-hate relationship with harmonica is all Kevin Peterson’s fault, (because) he told me he could teach me to play, so I bought a harmonica,” said Fugazzi. “When I went to him for a lesson, he said he knew nothing, but since I had a harmonica now, I better learn.”

Fortunately, when Fugazzi moved to Mankato, Clint Hoover and Chris Michalek became his teachers and mentors, he said.

“The harmonica world is pretty small, so if you show you have some chops, you can access a lot of great people,” he said.

First, “as an instrument, it is very close to the human voice,” he said. “It lets me play things I otherwise couldn’t sing, (and) it can bring intense joy to the music just as much as the blues.”

“It fits my personality because it lets me take something people think they know and surprise them, to prove them wrong,” he said. “Everyone has been over-saturated with things like guitar, but most people have never heard the harmonica in the context in which I play it.”

Indeed, “most musicians have strong opinions of what they think a harmonica can do, and it can be a fight to get on stage to show them they are wrong, (that) it is something that can really resonate with audiences,” he said. “I can’t tell you how many times I’ve been greeted with an eye roll, but left with a hug.”

Another event for youth is the Kids Q Competition, which will be at 5:15 p.m. Friday, Hammer said.

“We provide the meat, charcoal, grills, and mentors,” he said.

All participants walk away with a souvenir T-shirt, and prizes are up for grabs for winners, he added. Pre-registration can be accomplished at smokininsteele.com.

“It’s very popular,” he said. “It’s great to watch the faces as they present their creations, because their creativity shines through.”

While blues and barbecue remain the bedrocks of Smokin’ in Steele, the festival has also evolved to encompass a range of other events over the years.

“As involved as we are with barbecue and blues, it’s not for everyone, so we needed to do something for everybody,” Hammer said. “We want to build a festival one brick at a time that will involve the whole community.”

Among those variegated opportunities are a car show, a 5K, and a bike cruise.

The first 30 individuals to sign up for the hot rod show receive a commemorative dash plaque, Hammer said. Paradoxically, dash plaques are rarely seen on actual dashes, with most ending up displayed on walls as part of collections.

Set-up for the show starts at 3 p.m. Saturday, and the display runs from 4:30-7:30 p.m. Individuals can register online at smokininsteele.com.

As for the semi-trailers, “there are people who show their tractor trailers in competition, with very expensive paint jobs and spiffed up with lots of chrome,” Hammer said. “They take a lot of pride in them.”

A whole family can join the bike cruise for only $10, Hammer said. There are three routes to select from, eight miles, 23 miles, or—for “serious enthusiasts”—37 miles.

The weekend concludes June 4 with a pancake breakfast — a Knights of Columbus signature event — in the Beer Garden featuring all-you-can-eat pancakes, sausage, and eggs, along with milk, juice, and coffee for $7, Hammer said. The breakfast runs from 8 a.m. to noon.

There are more than 100 spots to camp at the fairgrounds for those who want to be on-site throughout the weekend, Hammer said. For a nominal fee, campers get access to water and electricity.

Hammer works with myriad blues festivals, and one thing separating Smokin’ in Steele from the pack is the sheer number of volunteers, he said. Many festivals are “volunteer-starved,” but that’s certainly not the case in Owatonna, as over 200 volunteers pitch in to make Smokin’ in Steele a success each year.

Sponsors are also paramount, and this year the festival moved the annual VIP dinner off its usual Friday night spot during the festival to Thursday night, he said. There will also be “full entertainment,” from the Joyann Parker Band, instead of a short acoustic set, and “we’ve outgrown” the Izaak Walton League lodge on the fairgrounds, so the VIP dinner will now be in the Beer Garden.

Reach reporter Ryan Anderson at 507-444-2376 or follow him on Twitter.com @randerson_ryan