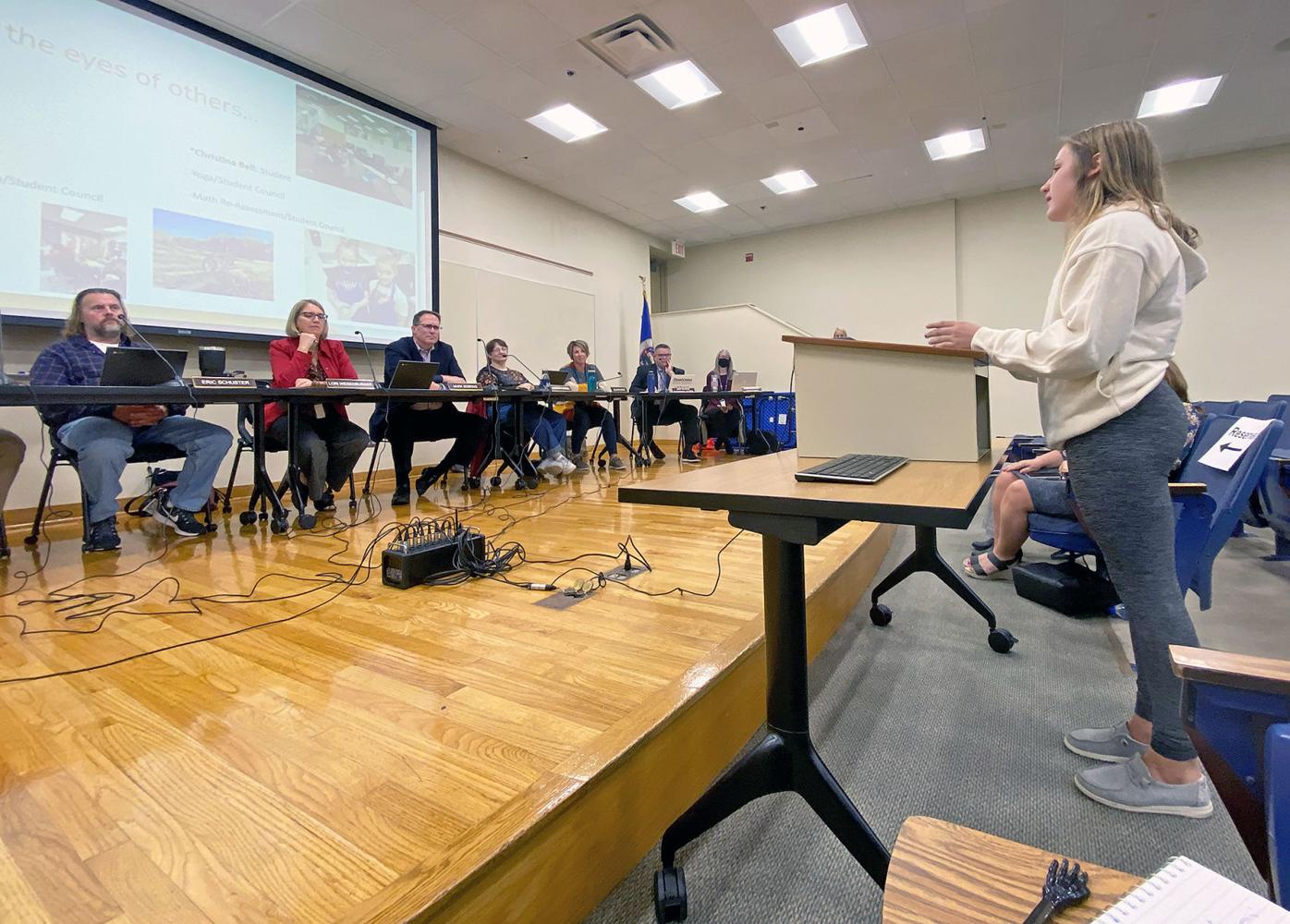 Christina Bell, a student at Owatonna Middle School, spoke to the School Board of her experience with the SOAR program and the benefits she’s seen for herself and her peers. The SOAR program is new at the middle school this year and allows students an opportunity to fine-tune skills in various subjects. (Emily Kahnke/southernminn.com) 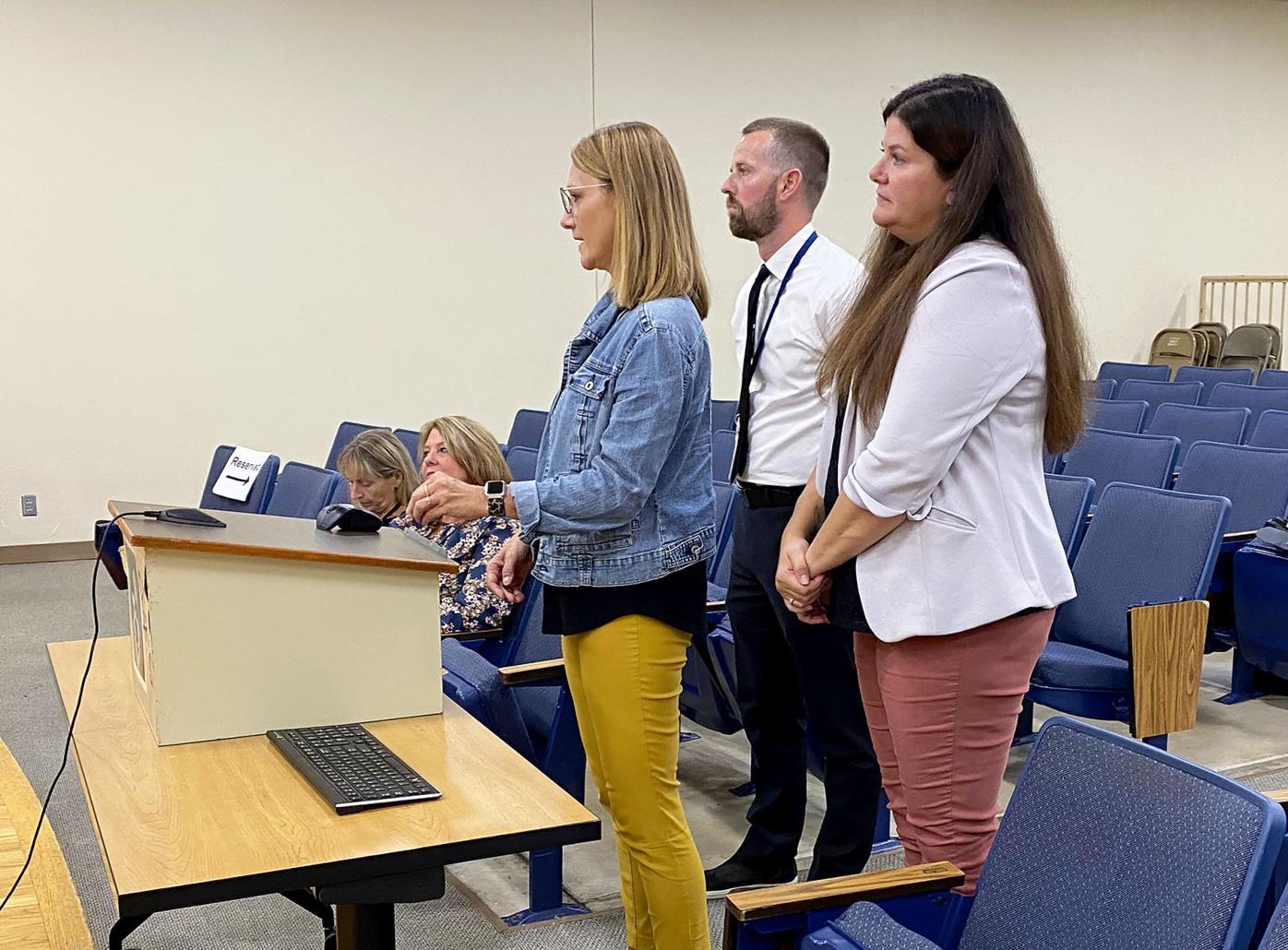 Christina Bell, a student at Owatonna Middle School, spoke to the School Board of her experience with the SOAR program and the benefits she’s seen for herself and her peers. The SOAR program is new at the middle school this year and allows students an opportunity to fine-tune skills in various subjects. (Emily Kahnke/southernminn.com)

Owatonna Middle School students are ready to “SOAR” this year, thanks to the administration team introducing a new and improved program to give them a second chance at complex concepts and enrich their day with fun activities.

A few years ago, the former Junior High School implemented a program called WIN, or “What I Need,” with the idea to help students who were struggling in certain areas. Still, it lacked the system and organization to be successful. With the implementation of Infinite Campus, the new SOAR program has taken off and been successful in ease of use for students and staff alike.

SOAR — Skills, Organization, Accountability, and Responsibility — is an intervention and enrichment program that has been built into the school day for students. It is similar to the COMPASS program at Owatonna High School, with two sessions at the beginning of every other Wednesday that run for 36 minutes.

Classes on these days are shortened to accommodate the SOAR sessions. Students can be assigned an intervention time to practice skills they had trouble grasping in courses over the previous days. They can retest on skills, complete homework, or (as the school calls it) practice.

Students who are not pulled into an intervention period may choose an enrichment program such as yoga, card games, sports, PC gaming, cooking, fat tire biking, and more.

Out with the old, in with the new

Due to budget and student access concerns, the middle school decided to eliminate homework help sessions and Saturday school, making the SOAR program that much more beneficial and, in some cases, crucial.

Middle School Principal Julie Sullivan said they’d seen attendance take a downturn for homework help and Saturday school because many kids couldn’t access these resources due to time constraints, or they were unable to get a ride to school early or on Saturday.

Zurbriggen stressed that individuals are often given second chances at tests in life, such as driver’s tests and college entrance exams. He asked, why shouldn’t students be given the same opportunity for a second chance at skills in school?

“We’ve emphasized that in our grading work with assessments being a key part of that primary focus in what’s calculated into the grade,” Zurbriggen said. “We knew we needed a way to give kids a chance to reassess and to have a chance to reteach if they didn’t get something the first time. They need another opportunity.”

Erin Klecker, a math teacher at the middle school, said that her experience with the SOAR program has been nothing short of positive. She took a poll with her students asking what they think of the program, and reported back that nearly all of them responded with thanks. She also said she’s seen a shift in the mindset of her students becoming motivated to learn skills and not fearing being left behind.

“I’ve seen a lot of things in my time at the middle school,” Klecker said. “I don’t think in all of those years have we had a time built into our school day to pull kids and work on skills and focus on their learning instead of just getting something done.”

Spanish teacher, and student council advisor Andrew Malo said he was excited to come before the school board to talk about SOAR because he loves it and sees the benefits reflected in his own grade book.

“I’m glad we revisited the WIN program because the point of it was so good,” Malo said. “ We learned from the mistakes and it’s been great.”

In the eyes of a student

Christina Bell, a student at the middle school, spoke to her experiences with the SOAR program at a work session Monday night for the Owatonna School Board.

“It gives you a chance to reboot back into school,” Bell said. “Having a break in the schedule from traditional school work and having time to relax is good for students.”

Bell also talked about how she thinks the opportunity to do a fun activity will drive students to complete and learn the material because they want to participate in the various activities being offered. She also mentioned that she was thankful for the opportunity to retake a math assessment and found value in being able to have more one-on-one time with the teachers to better understand the skills.

“I’m very glad the principals made a change to the system this year,” Bell added at the end of her speech.

The administration team for the middle school have planned and scheduled out the program for the entire first semester to ensure its success.

“It gives you a chance to reboot back into school. Having a break in the schedule from traditional school work and having time to relax is good for students.”