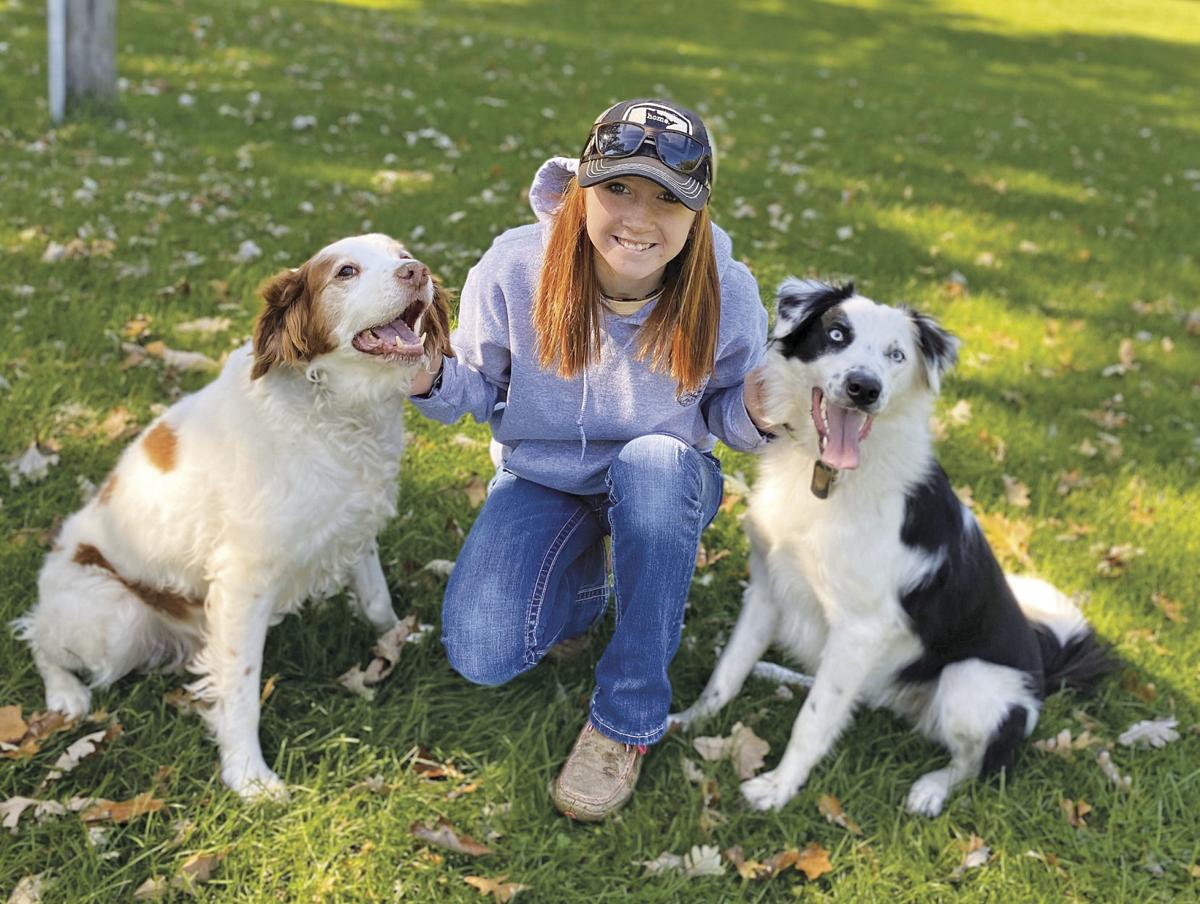 While working at a dog boarding business in town, Owatonna High School senior Brianna Levisay saw a larger need for kenneling services in the area. As vice president of the local FFA chapter, she created her own set-up at home — going on to win a state proficiency award for her business from the Minnesota FFA Association. (Photo courtesy of Brianna Levisay) 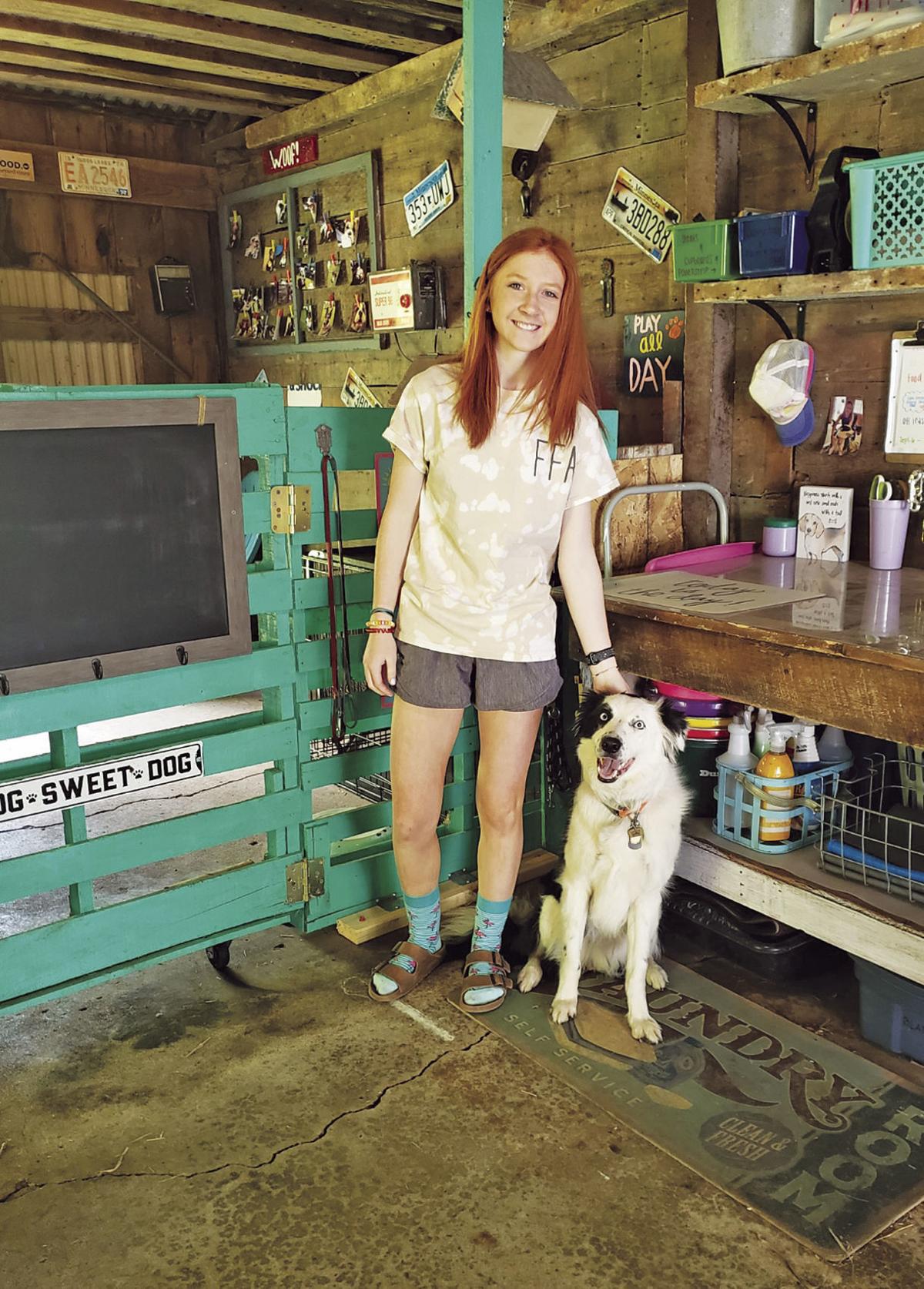 Starting last summer, Levisay took the money she made and reinvested it into more kennels, expanding her boarding business to be able to accommodate multiple dogs at a time. Now, she says one of the main skills she’s learned is being able to read the animals and socialize them safely during play time. (Photo courtesy of Brianna Levisay)

While working at a dog boarding business in town, Owatonna High School senior Brianna Levisay saw a larger need for kenneling services in the area. As vice president of the local FFA chapter, she created her own set-up at home — going on to win a state proficiency award for her business from the Minnesota FFA Association. (Photo courtesy of Brianna Levisay)

Starting last summer, Levisay took the money she made and reinvested it into more kennels, expanding her boarding business to be able to accommodate multiple dogs at a time. Now, she says one of the main skills she’s learned is being able to read the animals and socialize them safely during play time. (Photo courtesy of Brianna Levisay)

As with many events this spring, the virtual State FFA Convention earlier this week recognized student achievements over the past year and helped seniors look toward the future. Soon-to-be Owatonna High School graduate Brianna Levisay was among this year’s honorees, taking home the state proficiency award in small animal production and care.

Watching the recognition in an online video from her home, Levisay said it was strange not being able to have the local chapter there in person to cheer her on. Still, although the ceremony may have been slightly more reserved this time around, it hasn’t diminished the pride Levisay’s advisors and state FFA officials feel about her achievement.

“She became eligible for the award by taking an agriculture class, becoming an FFA member and then, the third part was that she started a business,” said Jamie Gray, agriculture teacher and FFA advisor at the high school. “Her business started because she was working for a dog boarding house in town and she noticed that there was an overflow … Brianna worked with her parents and they bought a kennel, fenced in a little area behind their back shed and she started taking in three to four dogs at a time.”

In order to be considered for the award, Levisay had to submit a detailed application about her business’ operations and finances, in addition to writing a few longer personal essays about the skills she gained and her plans for the future. All in all, Levisay estimated that she spent over a month working on her submission — after almost a year running the kennel.

“I opened in the middle of last summer — that was when I started making it. I started out with one kennel and then I figured I had room for two more,” she explained. “I found a couple and made it into a small business.”

For Gray, Levisay’s decision to take the money she had made and invest it in more kennels was a particularly impressive aspect of the project. She and fellow advisor Elizabeth Tinaglia began meeting with students to start award applications back in the fall, discussing their goals and getting records up to date before ramping up preparations in January. High school students throughout the state are able to submit for a proficiency award, with typically just over 40 categories to choose from. While there are multiple winners at the regional level, in the state competition there’s only one for each division.

“Every region can send two or three applicants to the state level, and it’s judged by people from all over the state made up of agriculture teachers, business people — they evaluate projects based on how they feel it is as a business and how the kids present themselves,” added Gray. In addition to Levisay, who won at the state level, fellow chapter member Maryn Cowell came in first in the region for beef production entrepreneurship.

At the regional level, students not only have to reflect on their businesses and goals in writing, they also have to participated in an interview.

“It was a good experience to have to talk to the judges about what I had done and how I had done it,” said Levisay.

In talking about the skills she gained from boarding dogs, Levisay said a big one has been getting better at reading the animals and predicting their behavior. Keeping multiple dogs at a time, and having a designated play area for the pets to run around together, she added that it was important to try and be aware of how different animals would interact.

“I learned to know if they were going to get along or if I needed to step in before anything happened,” she said. “It helped that I worked at a dog kennel before. I had a good two to three years to see it at my job and learn it. Textbooks definitely can’t teach it to you.”

With plans to study animal or veterinary science next year at the University of Wisconsin-River Falls, this information will likely come in handy in Levisay’s future endeavors. It’s also something that she didn’t know could be a possibility through the extracurricular organization.

“I knew that you could show in FFA, and I knew that people did a lot of farming projects through it, but I didn’t know that you could do what I did and be so successful,” she explained. “Working with dogs is something I’ve always loved to do.”

Juleah Tolosky, executive director of Minnesota FFA, agreed that this is a common misconception.

“We recognize that a big part of agriculture is animal science. Agricultural systems and animal science impact everybody, no matter where they are,” she said. “If we say somebody has to work with livestock to have useful animal skills — that’s simply not true.”

Going forward, Tolosky added that Levisay will receive a plaque and a small financial prize as part of the award. Additionally, her application will be forwarded to the national level for evaluation. Levisay is currently in the process of editing her submission for this next stage of the competition, using notes and feedback she gained from judges up to this point. After getting her materials in again by June 1, Tolosky estimated that Levisay should hear back by late August on next steps.

In the meantime, Levisay is preparing to start school in Wisconsin in the fall and turn the business over — at least temporarily — to her parents while she continues her animal science studies. “They’ve said when I go to college they’re going to keep it up. Maybe not fill the kennels, but keep it up a little bit.”

In addition to her state proficiency award, Brianna Levisay is also one of five students in the Owatonna chapter to receive a State FFA Degree. The other recipients are Bailey Keck, Lilly Weegman, Jacob McShane and Ashlie Tesch.

As with the proficiency award, students have to submit a hefty application and resume of their FFA activities to be considered for the top honor — including financial records for their business projects and skills they've gained through the program. Open to high school juniors and seniors, advisor Jamie Gray said the chapter typically has five to six recipients each year.