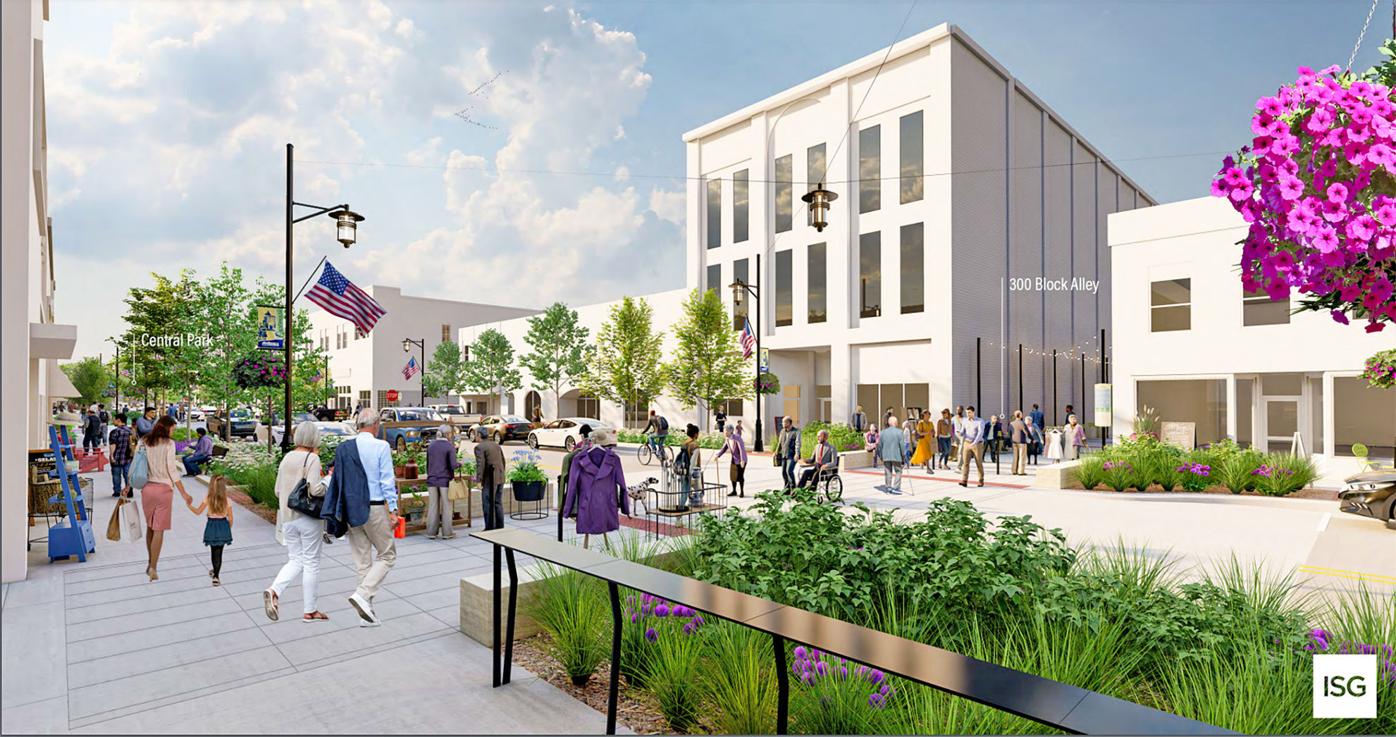 An artist’s rendering of the downtown Owatonna streetscape project shows what could come to the 100, 200 and 300 block of North Cedar Avenue. (Photo courtesy of the city of Owatonna) 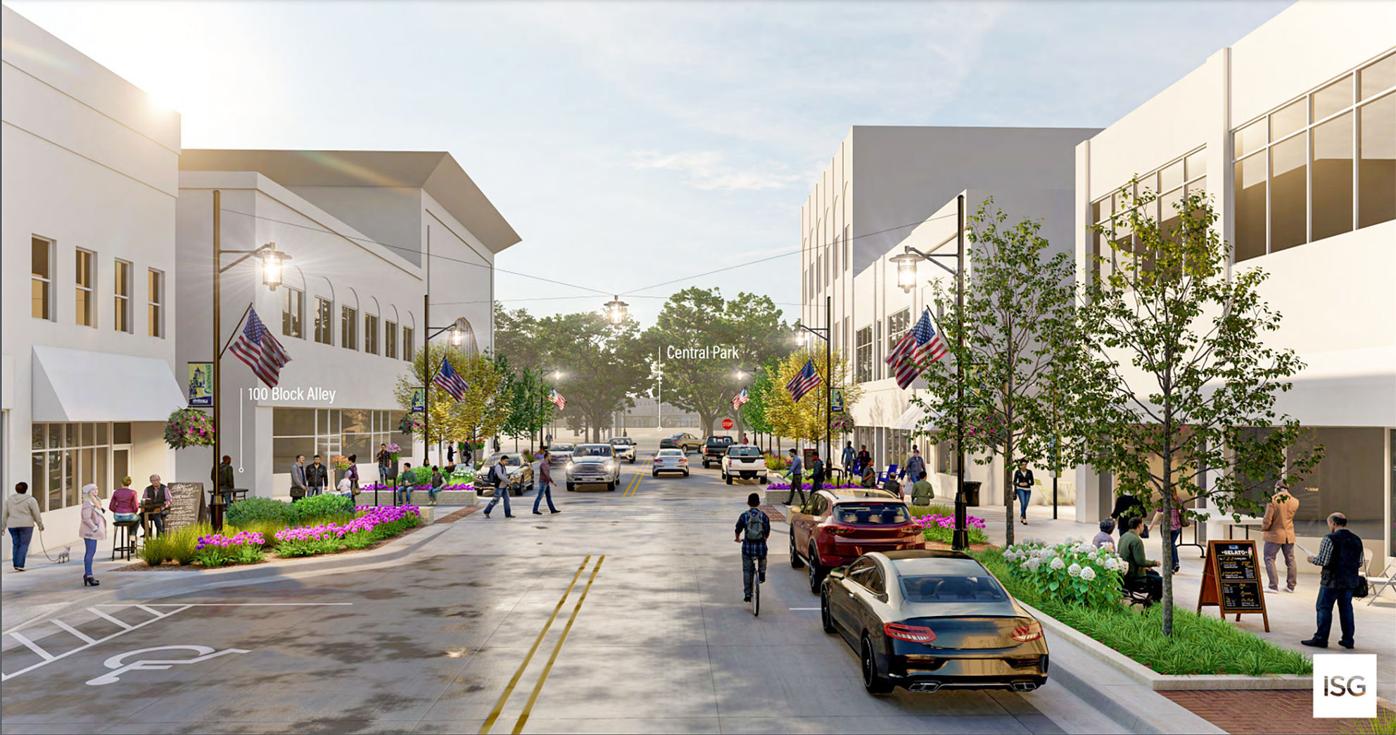 In this artistic rendering by ISG, the final product of the downtown Owatonna streetscape project showcases wider sidewalks and parallel parking on both sides of North Cedar Avenue. (Photo courtesy of the city of Owatonna)

An artist’s rendering of the downtown Owatonna streetscape project shows what could come to the 100, 200 and 300 block of North Cedar Avenue. (Photo courtesy of the city of Owatonna)

In this artistic rendering by ISG, the final product of the downtown Owatonna streetscape project showcases wider sidewalks and parallel parking on both sides of North Cedar Avenue. (Photo courtesy of the city of Owatonna)

Construction season is nearly upon us and the city of Owatonna is gearing up to begin the next phase for downtown.

During the Owatonna City Council meeting Tuesday night, the council unanimously approved accepting the feasibility report for the upcoming streetscape project, which will tackle the 100, 200 and 300 block of North Cedar Avenue to fit into the city’s long-term master plan for the downtown area. The council also approved setting a public hearing for April 20 to allow community members to provide their thoughts and concerns about the project.

A handful of community members decided they wanted to be heard now, however, and spoke during the public comment portion of Tuesday’s meeting. Downtown business owners and a retired resident stated they support the overall idea of the project, but implored the council to reject, adjust or at the very least, reconsider the proposed changes to parking.

Matt Kottke, owner of Kottke Jewelers on the 100 block of Cedar Avenue, said that while he is highly in favor of the projects – specifically as it related to the hotel development coming to the 200 block – he is very concerned about the loss of up to 30 parking stalls.

“The idea of going to parallel parking on both sides will be very detrimental to our business and numerous businesses that are located on that street,” Kottke said.

The current set up for parking has diagonal parking along the east side of Cedar Avenue between West Broadway Street and East Rose Street, which is the streetscape project area.

Kottke asked that each city council member take the time to visit with every business owner along the three blocks to hear from them personally before the final vote on the project.

“Don’t wait to hear the conversation from the mayor or the city administrator – I appreciate that they have come down – but we need to see you in our doors,” Kottke said. “We need to talk to you, this is important, this is our livelihood.”

Mayor Tom Kuntz and City Administrator Kris Busse recently spoke with the businesses within the three blocks in question, and Kuntz said overall there was support for the streetscape project, but that parking was the main concern that was brought up.

“It is probably more so in the 100 block that there is a concern about parking,” Kuntz said. “A couple businesses that sell insurance said their customers are usually a bit older and they don’t want to walk long ways, so they like to be able to park right out front. I know one business did say they would be open to finding a new building and just relocating.”

Jerry White, a longtime deputy state fire marshal who retired after 35 years in 2002, was among those discussing the impact on older community members. White told the council that he loves Owatonna and believes that the city has the opportunity to be the “star of southern Minnesota” because of its vibrant downtown, but the changes to parking could derail that chance.

“If I were a businessman I would be very, very opposed to this simply because you are cutting down the foot traffic,” White said. “A business just recently went out of business. Right now this pandemic is killing people, not just with [COVID-19] but the fact that they can’t make their businesses work and I hope you take that into consideration when you take a look at the foot traffic that this will deny a lot of us who turn up to shop.”

White said that because of his difficulty moving around at his age, he is worried about the relocation of the handicap parking spot that is currently outside Kottke Jewelers. Greg Kruschke, the community development manager for the city, said that each block currently has one handicap stall and the number will not change, though the stalls may be relocated.

“The mid-block crossings will be fully ADA accessible, thus the location of the (handicap) stalls near them,” Kruschke said.

As of Wednesday morning, Kruschke said the city was able to “change some things” and was able to find space for an additional four parking stalls, bringing the total number of stalls that will be lost along Cedar Avenue down to 26.

“It is important to note that there are almost 1,100 public parking stalls within a block of Cedar and over 3,000 public and private parking stalls in the downtown area,” Kruschke added.

Kuntz said he is hopeful there will be a good showing of community members at the upcoming public hearing, including comments from business owners downtown who support the project. Kuntz said he knows the city and the council will be looking at alternatives to see if there is a way to get additional parking spaces into downtown, though he does not feel that means the diagonal parking will remain.

“It is important to remember that as council looks at all these issues, we have to consider all three blocks and what is best for Owatonna in the long-term,” Kuntz said.

This story has been modified to correct the location of the diagonal parking on N Cedar Avenue.

Map courtesy of the city of Owatonna

For more information on the downtown Owatonna streetscape project, visit:

A public hearing on the project is scheduled for 7 p.m., April 20 in the Owatonna City Council Chambers on the West Hills Campus.