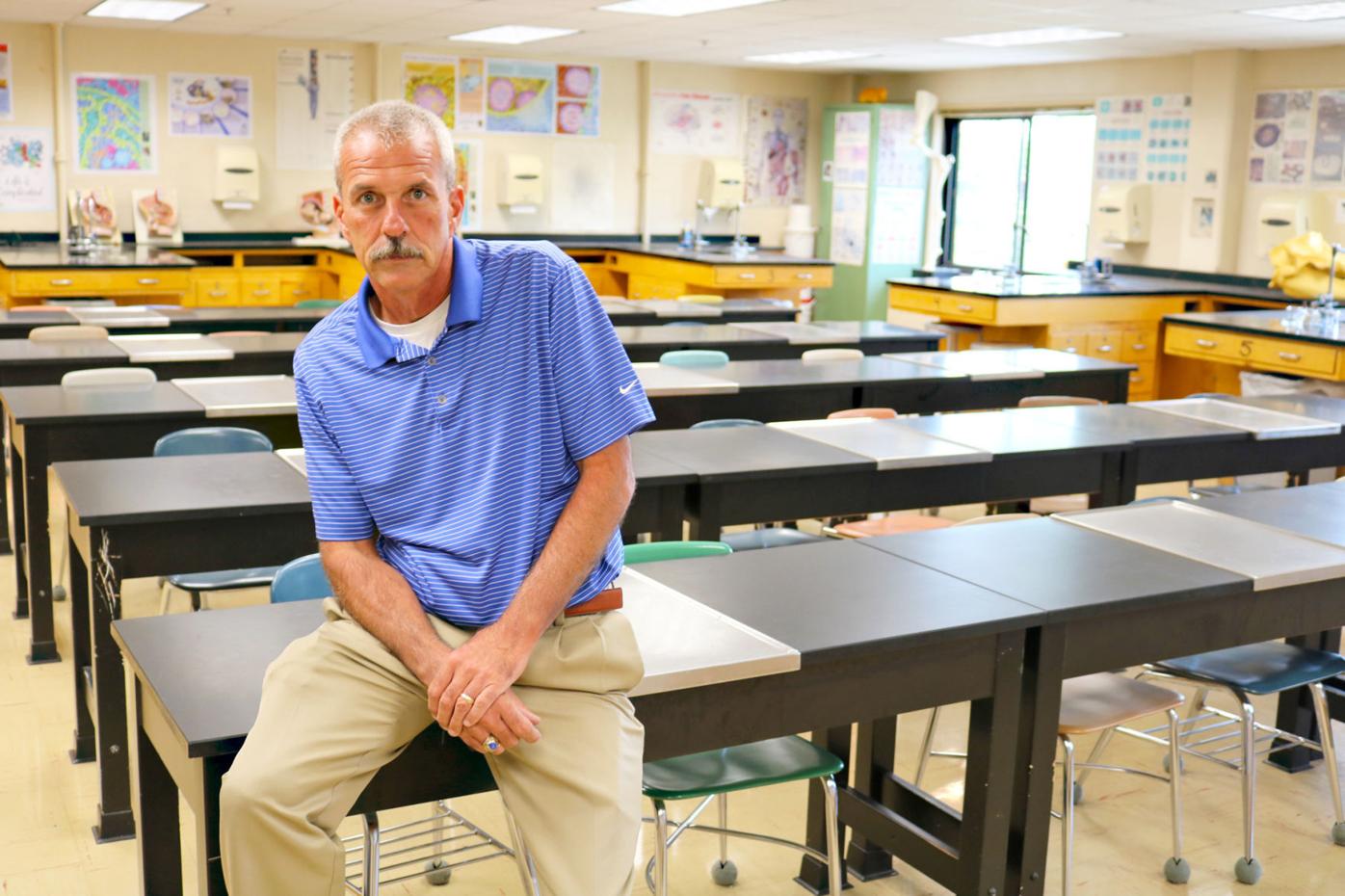 Owatonna teacher Jeff Williams teaches in the same high school science room he was in 20 years ago during the infamous 9/11 terrorist attacks. Williams said on that day, he was learning right alongside his students. (Annie Granlund/southernminn.com) 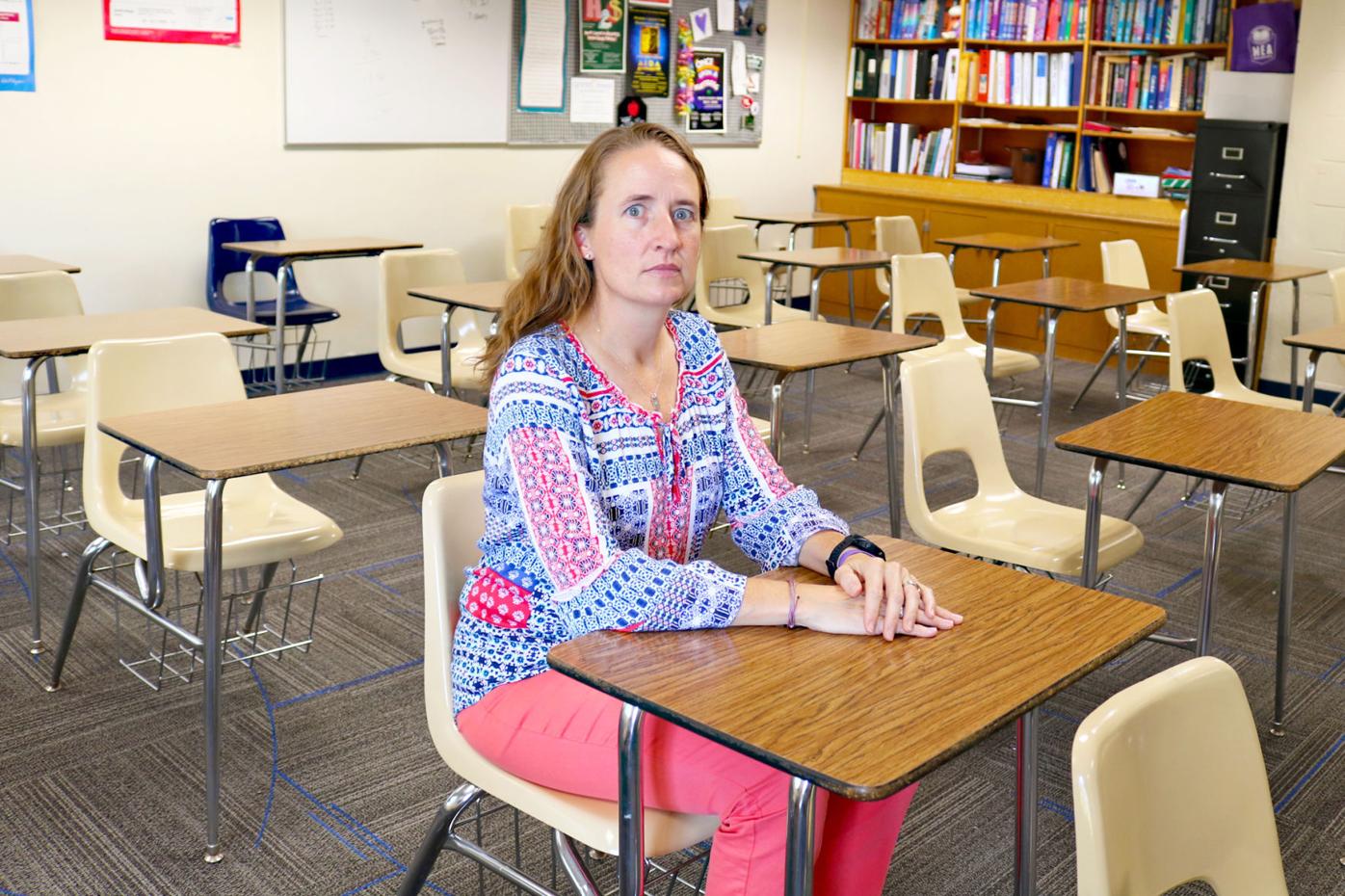 Kristen Andrix, a math teacher at Owatonna High School, was only 26 years old when she found herself in front of a room full of teenagers grasping for answers during the 9/11 terrorist attacks in 2001. Andrix still teaches today in that same classroom. (Annie Granlund/southernminn.com)

Jeff Williams distinctly remembers the genetics lesson he was giving his students. Kristen Andrix vividly recalls the look her husband gave her through the door of her math classroom.

Both remember how it felt to be in the same Owatonna High School rooms they still teach in today when historic attacks on America left them — and their students — in quiet shock that Tuesday morning.

“I had 30 kids in my class, and we just kind of … watched,” said Williams, as he recalls seeing smoke come out of one of the World Trade Centers in New York on Sept. 11, 2001. “There was just so much uncertainty, and as a teacher, you’re left trying to talk to the kids about this unknown, but then the second strike happened. The second tower was hit by a second plane. And it all became very clear — America was under assault.”

Williams said he has thought a lot about that day as the 20 anniversary of the 9/11 terrorist attacks creeped closer. Over the last couple months, one of the students that sat in Williams’ science class that morning corresponded with him via email, as they recalled what that day was like. Williams said it felt like being in a paradigm, as a teacher, to be in charge of a classroom without having any answers.

“We’re kind of used to, as teachers, having some sort of answer, but as we’re watching this all unfold, there are no answers,” Williams said. “So we just were watching and learning together with our students — that was really humbling.”

Andrix echoed her coworker, stating she also was left speechless during the first hours of that day. Still a young teacher at the time, she said it had never been harder to find that “balance” of being the adult in a room with teenagers who weren’t, in reality, that much younger than her.

“I remember having to question, as the adult, ‘How much of this should I let them continue seeing?’” Andrix said. “I remember trying to balance my reaction to make sure the kids felt safe, but at only 26, I was still trying to figure things out myself. But in these moments, you have to turn off your own emotions and take the mindset of being a role model and a caretaker — you have to be the adult.”

Andrix and Williams admit that the day of the terrorist attacks felt cold, somber and extremely long. When Andrix returned home, she said she and her husband, social studies teacher Todd Andrix, continued to sit in silence and process the never-ending news cycle.

“We had a job to do during the day, and we weren’t the ones under attack,” Williams said about waiting until the school day was over to process his own feelings. “America was honestly under attack, and for a day, we had no idea how big it was going to get. That was difficult, but we had to talk the kids through it, make sure they knew that, not only were we going to figure this out, but that we were going to stand strong against the people who did this.”

Though there are many parts of that day that still bring pain to both teachers — watching people jump from the World Trade Center buildings before they collapsed, seeing buildings that Williams said “seemed to go up forever” fall straight down — Andrix fondly recalls one specific thing from that day.

“I had never felt such a strong, unified sense of patriotism,” she said. “It is the most impactful part of that day for me — our country hasn’t felt that patriotic since, but it was truly a ‘come together’ moment that I felt on the big, grand scale. We were just kids — me and my students — but that day we were a part of the bigger picture.”

For days, weeks, months and even years following the terrorist attacks, Williams and Andrix said the world changed as a direct result of that one day. The attacks led to massive changes in security procedures and protocols around the nation, from security checkpoints in airports to the immigration and deportation process.

Less than a month after 9/11, U.S. troops invaded Afghanistan in an attempt to dismantle al-Qaeda — the terrorist group that claimed responsibility for the attacks that day. The invasion became a key part of America’s “War on Terror,” under the leaders of President George. W. Bush.

America’s military involvement in Afghanistan – which just ended in August and was immediately proceeded with the Taliban reclaiming control of the country – was the longest war in American history.

Now, when the two longtime, beloved Owatonna teachers walk into those same rooms they stood in 20 years ago, they are met with faces of children who were seemingly untouched by the events of that day.

“They may not have been alive when the attacks happened, but they are living in a world that is a direct result of that day,” said Andrix.

Though the world has been forever changed and today’s high school students may not be completely aware of just how much, Williams said that change was the only thing that was perfectly clear about 9/11.

“I think we all understood there was going to be a different world than the one we grew up in,” Williams said. “The students that day knew they were in a historic moment, a moment that would change the way we look at the world from this point moving forward … we could all really feel it at that time.”

"We were just kids – me and my students – but that day we were a part of the bigger picture.”

“The students that day knew they were in a historic moment, a moment that would change the way we look at the world from this point moving forward."