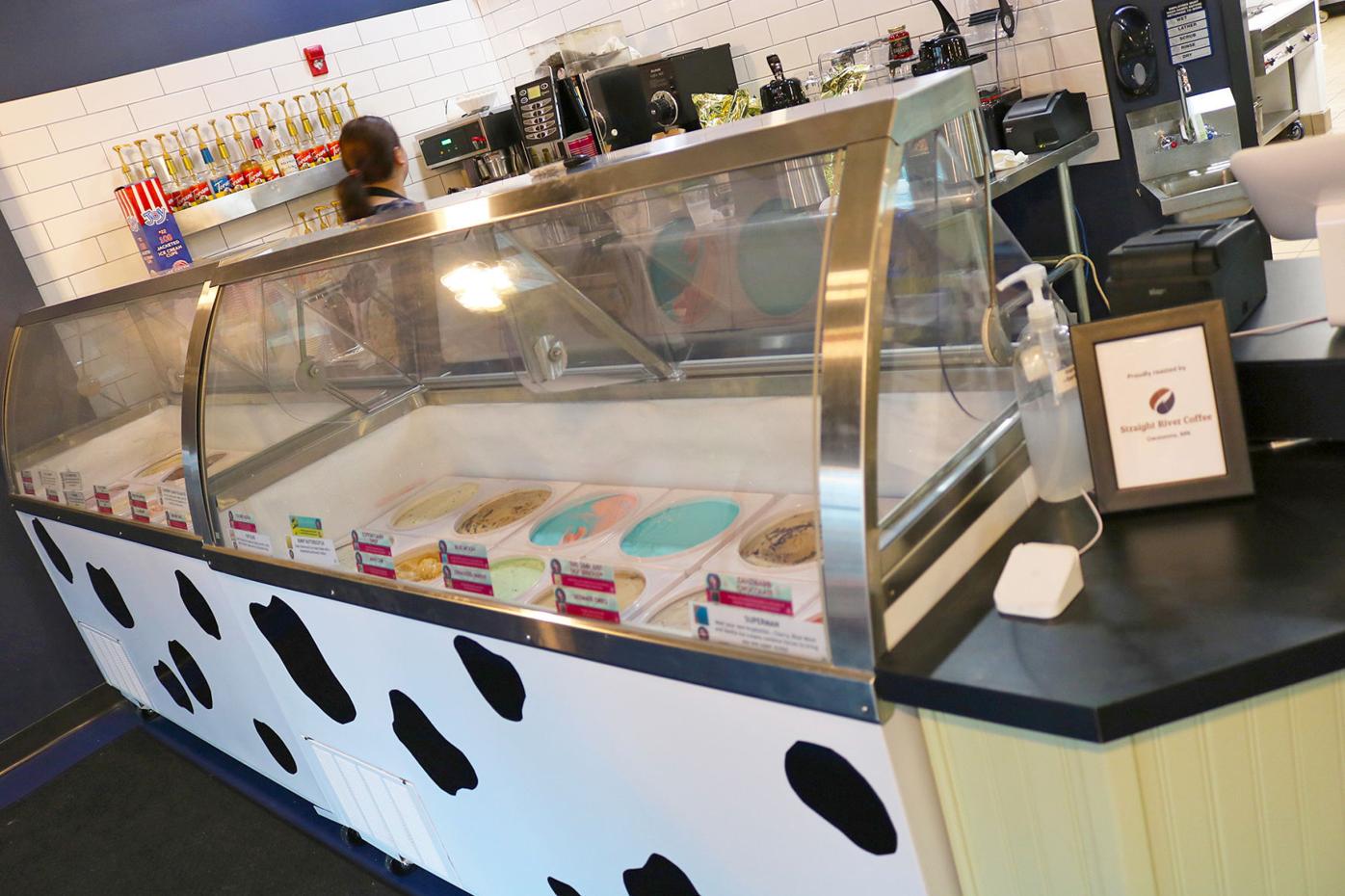 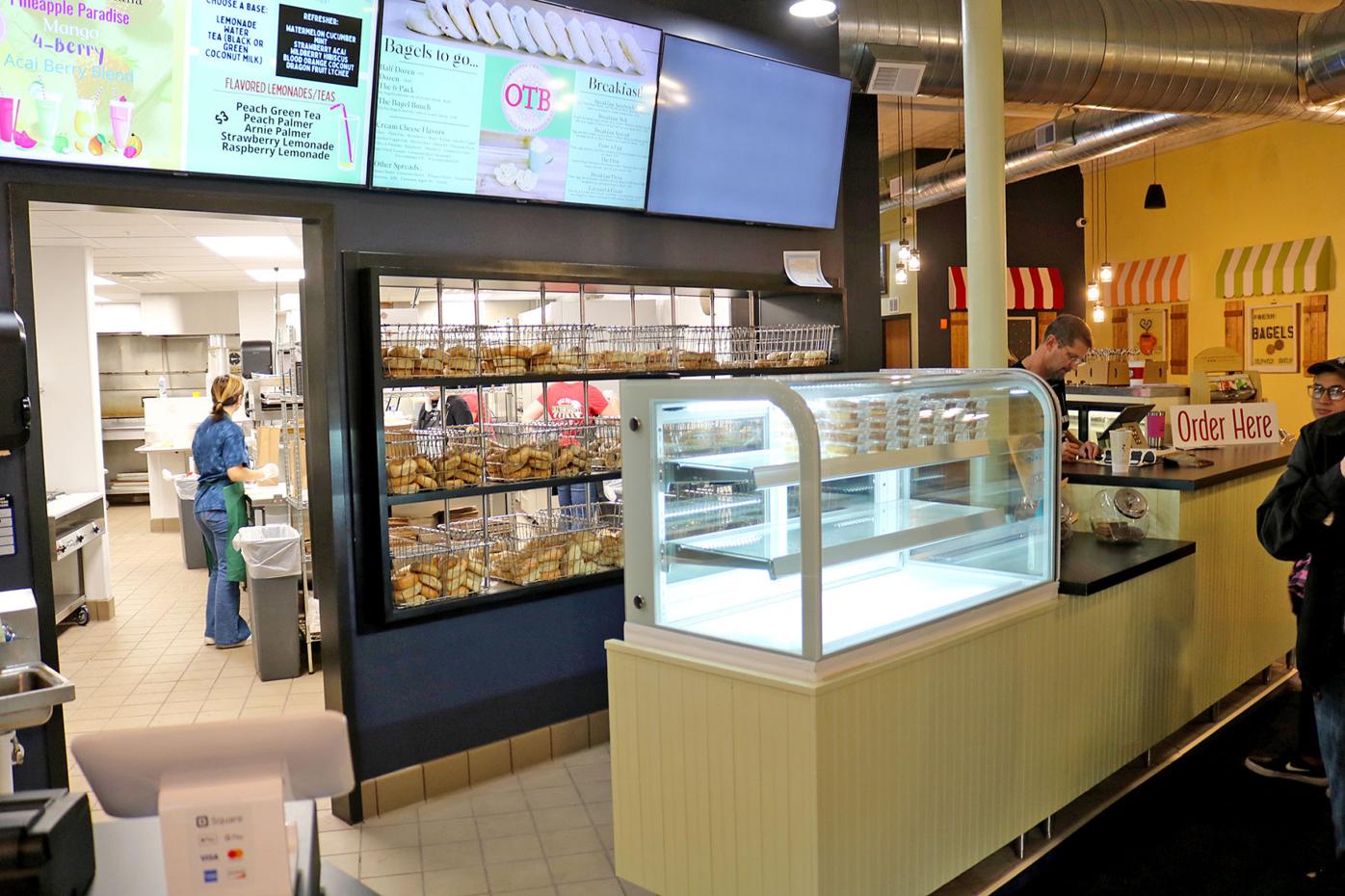 The owners of the OTB Cafe were able to maneuver in their giant oven and walk-in cooler from the former location next door to their new kitchen in their new location, along with several pieces of new equipment. (Annie Granlund/southernminn.com) 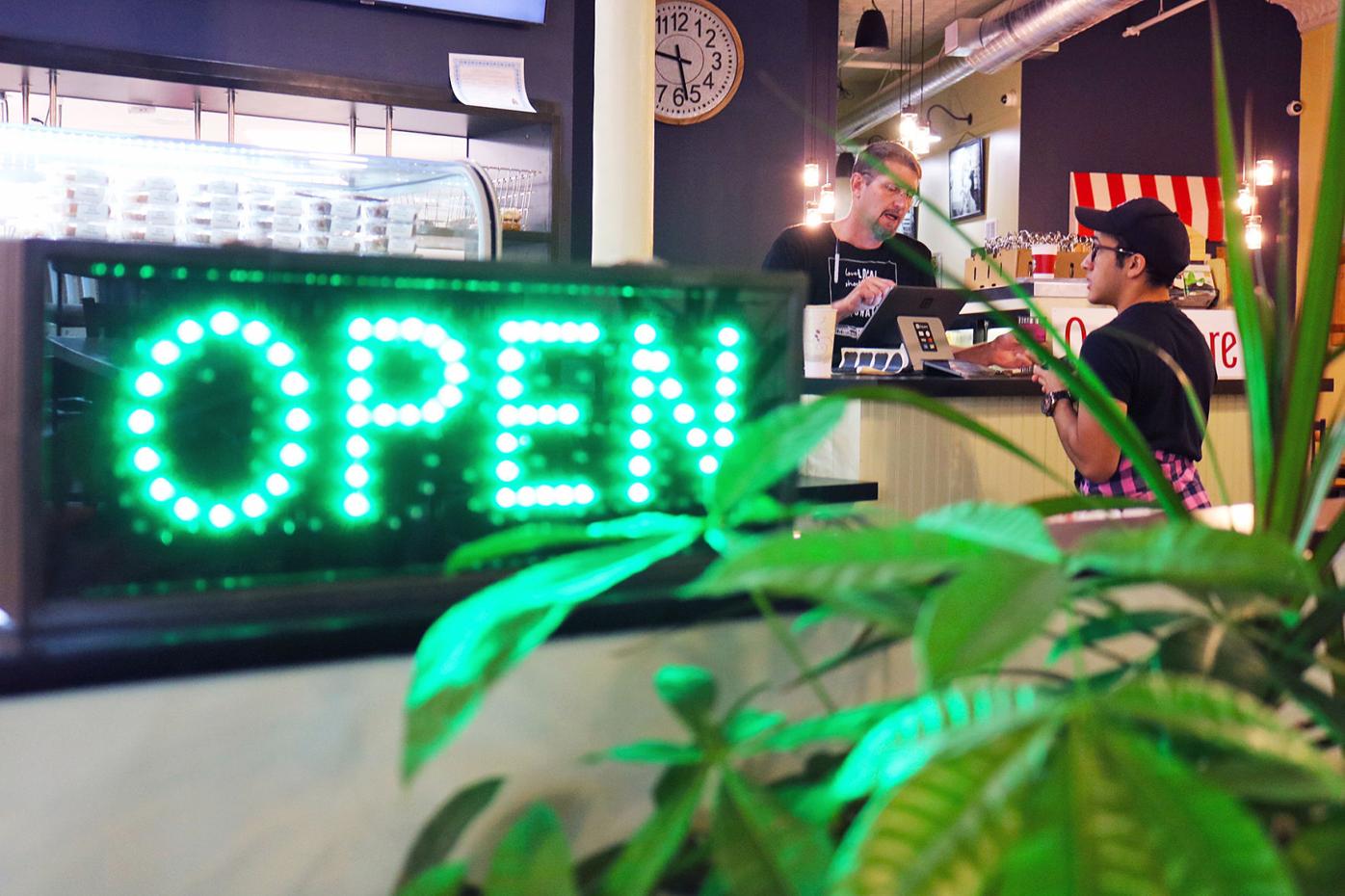 Mark Wilson takes one of the first orders at the Old Town Bagels and Cafe’s new location on Friday. The cafe was closed for 11 days as the businesses transitioned from their former space to the new space right next door. (Annie Granlund/southernminn.com) 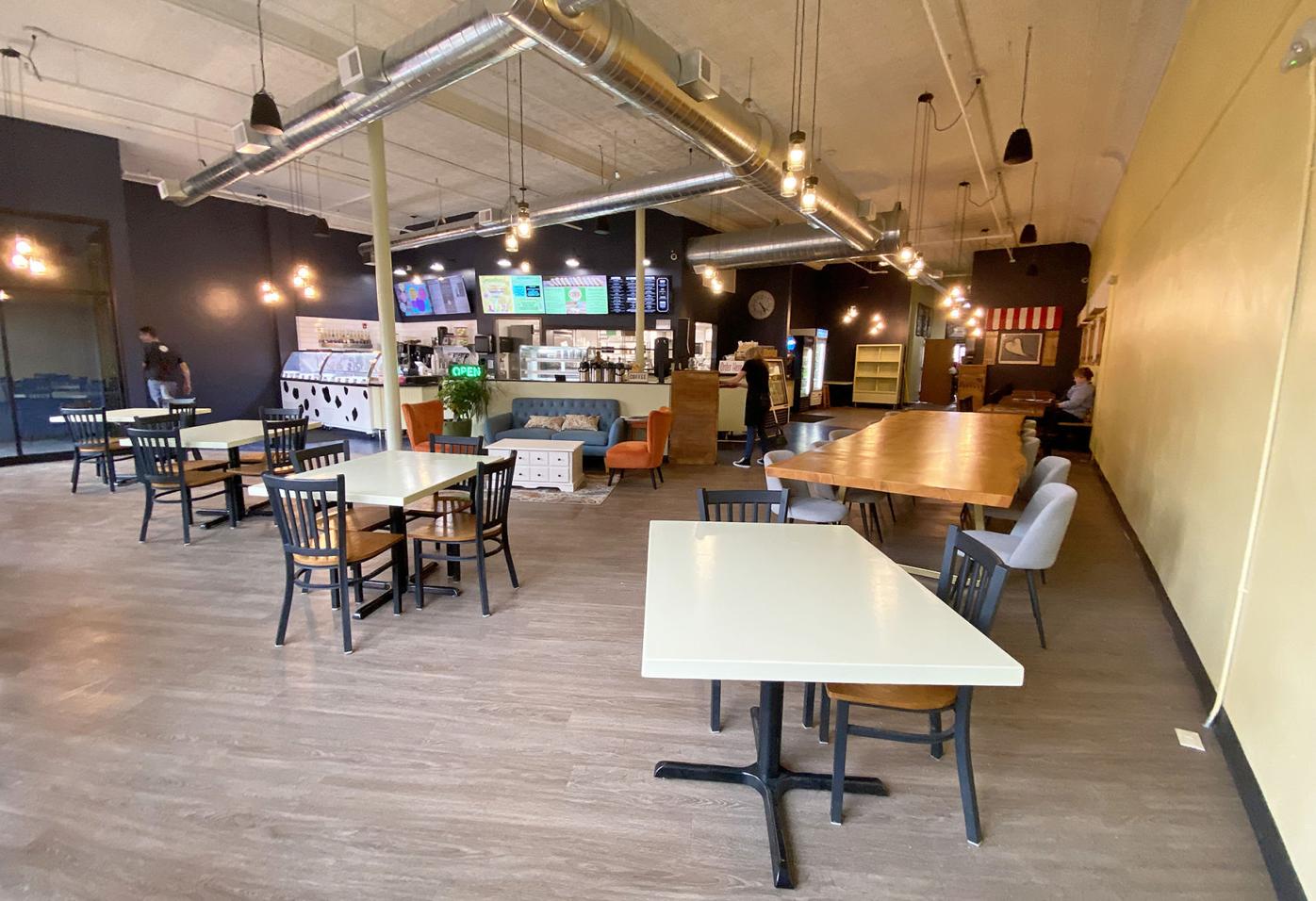 The new location of OTB Cafe provides a significant amount of extra seating compared to the former location. Details such as artwork and a new garage-style door are yet to be finalized in the new space. (Emily Kahnke/southernminn.com)

The owners of the OTB Cafe were able to maneuver in their giant oven and walk-in cooler from the former location next door to their new kitchen in their new location, along with several pieces of new equipment. (Annie Granlund/southernminn.com)

Mark Wilson takes one of the first orders at the Old Town Bagels and Cafe’s new location on Friday. The cafe was closed for 11 days as the businesses transitioned from their former space to the new space right next door. (Annie Granlund/southernminn.com)

The new location of OTB Cafe provides a significant amount of extra seating compared to the former location. Details such as artwork and a new garage-style door are yet to be finalized in the new space. (Emily Kahnke/southernminn.com)

It may have been less than two weeks, but for many loyal customers, it was still a painfully long wait.

Owatonna bagel buffs rejoiced on Friday when Old Town Bagels and Cafe was back open for business following an 11-day closure. This specific closure, however, had nothing to do with the ongoing pandemic and everything to do with a new exciting adventure for the cafe’s owners and all of the community.

The OTB Cafe opened brand new doors that morning, located alongside their former location on the 200 block of North Cedar Avenue. Owners Mark and Stacy Wilson had been wanting to expand their wildly popular business for a handful of years, and when Mac Hamilton of Hamilton Real Estate Group presented his plan to totally redevelop that block, the perfect opportunity finally presented itself. Because Hamilton had no desire of knocking down the building that housed the bagel shop, the former Jerry’s Supper Club and an empty space between the two, the decision was made early on that the Wilsons would expand into the vacant space.

The reconstruction of the cafe’s new space, done by Mohs Contracting, has been ongoing all fall, but Sept. 26 marked the beginning of the official transition between the two locations.

“Our oven is 8-foot-by-8-foot-by-8-foot and hard to be taken apart piece by piece to get out the front door,” laughed Mark Wilson. “The same with our walk-in cooler, but we got it all moved over and it filled the space pretty good.”

Optimistic they could make the transition happen in one week, Wilson joked that they needed a bit more time to make sure everything was in place for the grand re-opening. When the time finally came Friday, the public showed their appreciation — and loyalty — abundantly.

“It was a very good, very busy weekend,” Wilson said. “A lot of people were impressed with the remodel, and a lot of our regulars came in. Then they shared it with their friends and were back with those friends the next day.”

There was also a sea of blue that emerged into the cafe, Wilson said, when the students were able to go explore the new location following the early release for Owatonna’s Homecoming celebration.

“The kids found us,” he laughed.

Wilson said the staff is still adjusting to the new space, but that they are happy to have new and additional equipment to get food made and out to hungry customers. They are also working on hiring additional staff, he said, and are hoping to onboard a couple new employees each week for the rest of the month.

More than a new look

The new location is only one small portion of what is new at OTB Cafe — a noticeable change being the new-ish name they are promoting.

“Cafe has always been in the name and ‘Old Town Bagels’ is such a mouth full,” said Stacy Wilson. “The Old Town Bagels is still there, but we thought it made sense with the update to push this name.”

New signage is currently being developed to hang in the front and back of the store, showcasing the ‘OTB Cafe,’ but iconic pieces of ‘Old Town Bagels’ is still on full display from the painted windows to the sign that hung in the former location.

Another major new piece is what customers will be greeted with when they first walk into the front door of the cafe — ice cream. This spring, the cafe partnered with Chocolate Shoppe Ice Cream Co., a family-owned creamery based in Madison, Wisconsin, to become proprietors for the Owatonna area to serve the premium ice cream. The Wilsons took the ice cream show on the circuit this summer, including catering a high school graduation and scooping up servings at the Steele County Free Fair, and now in their new location, the ice cream will be a permanent fixture.

“There will always be 24 flavors available, but some of those flavors will change, because there are more than just 24 flavors,” Mark Wilson said of what will be available in the shop. “We’re selling pints as well, and if someone wants a pint of a flavor we don’t currently have in the cooler, if they give us some notice we will happily get it pinted for them.”

The ice cream also served as one of the catalysts of the other major change for the bagel shop: new store hours. Having always closed after the lunch rush in the past, the cafe will be open from 6:30 a.m. to 7 p.m. Monday through Saturday.

“Our kitchen will still close at 2:30, so we won’t be making sandwiches and such after that time,” Wilson said. “But we will have sweet treats, ice cream and coffee all evening.”

The cafe will still be closed on Sundays.

The bigger picture of Hamilton’s reconstruction plan for the building is for it to coincide with the Marriott Courtyard hotel opening on the same block, as well as apartments simultaneously being built on Pearl Street. A downtown hotel has been on the wish list for Owatonna leaders for decades, and also served as a catalyst for the city to begin the streetscape road reconstruction project. The streetscape project, which is reconstructing the 100-300 blocks of North Cedar Avenue, is scheduled for completion during the 2022 construction season.

“It’s all happening and finally coming to light,” said Wilson, adding that he hopes members of the community will see the cafe’s new look as a promising sign of what is yet to come for the downtown district. “We were just the first little step, and there is a lot more to come.”