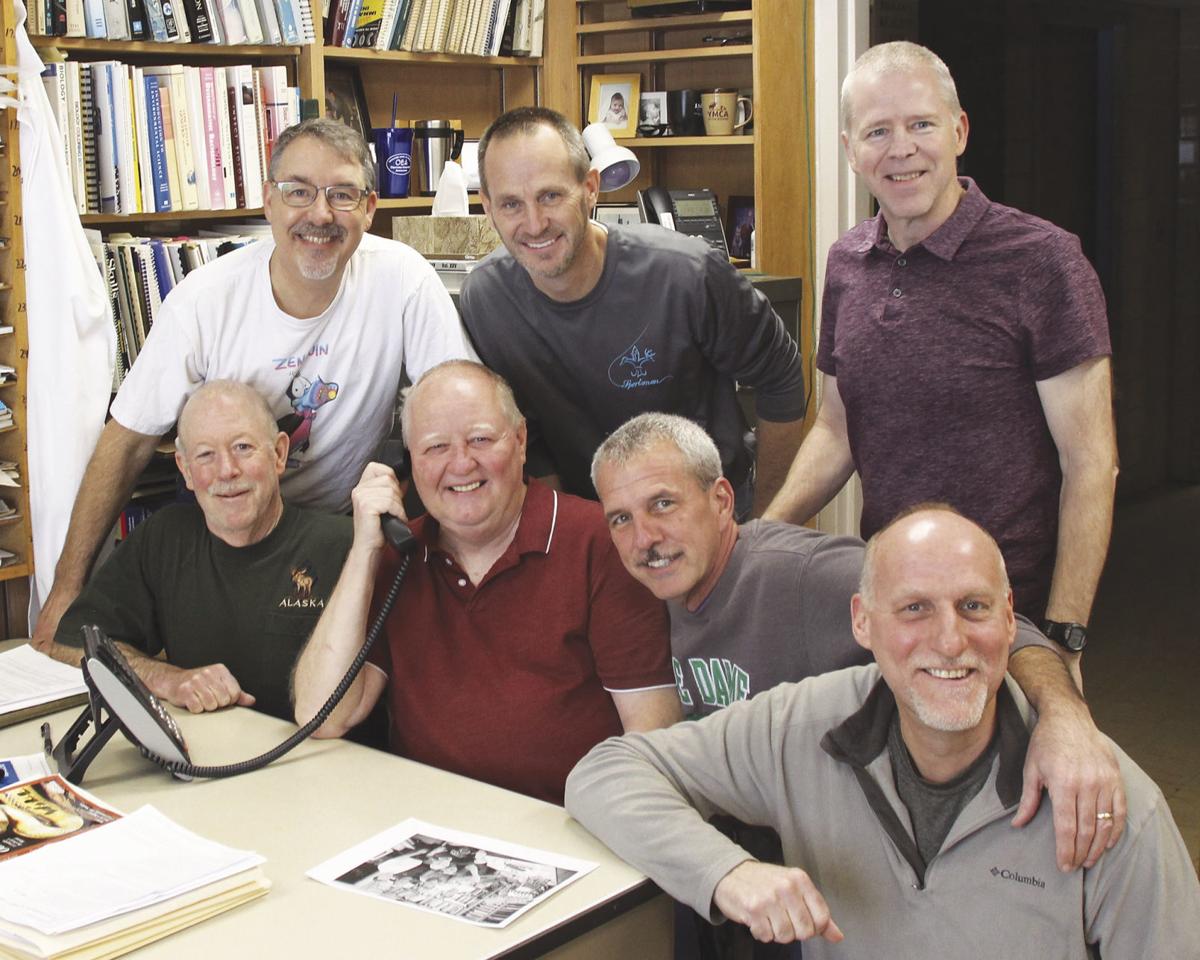 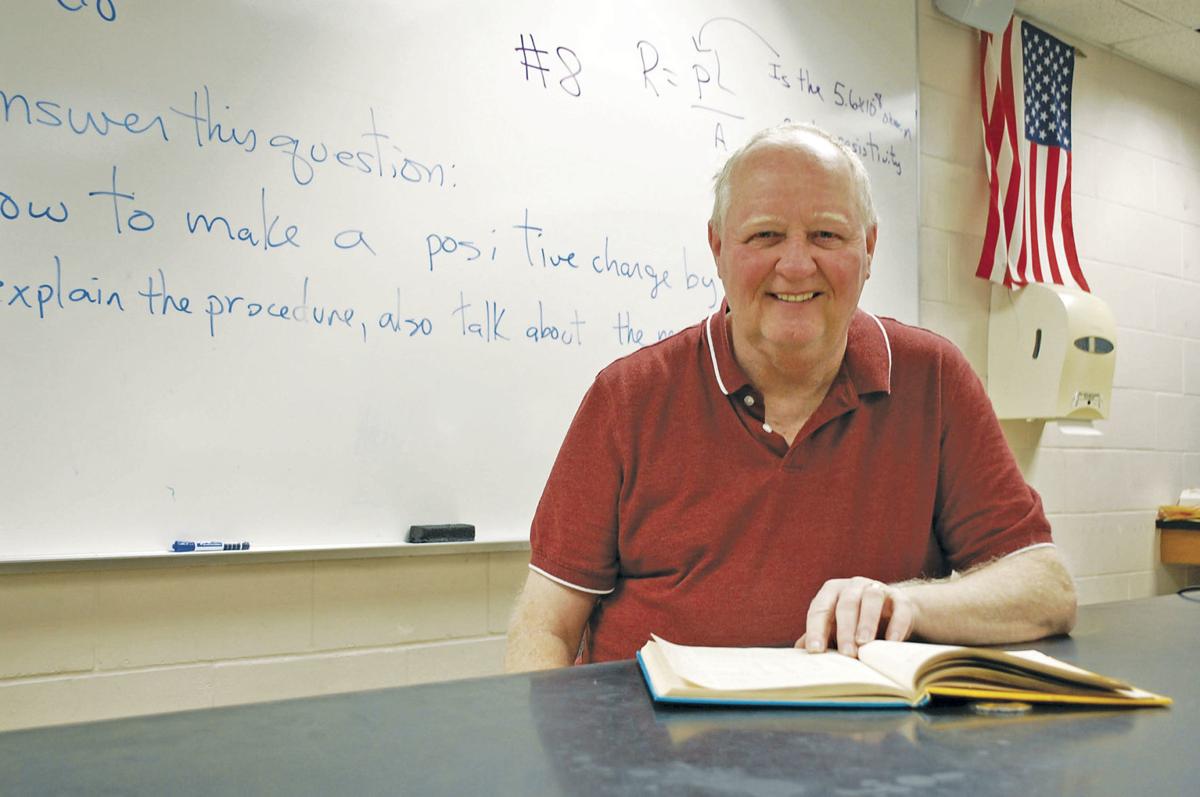 Science teacher Mike Stormo looks through a physics textbook with messages from colleagues at Owatonna High School written throughout its pages — a gift from the department on the eve of Stormo’s retirement after 29 years with the district. (Bridget Kranz/People’s Press)

Science teacher Mike Stormo looks through a physics textbook with messages from colleagues at Owatonna High School written throughout its pages — a gift from the department on the eve of Stormo’s retirement after 29 years with the district. (Bridget Kranz/People’s Press)

OWATONNA — Mike Stormo came to Owatonna on a bit of a whim.

“In the summer of 1976, I worked for the Mayflower Moving Company and we stayed overnight,” he explained, of his first visit. “Just in the time that we were driving around here in the truck I thought, ‘This is a nice town.’”

Fifteen years later, the career science teacher saw an opening at the high school and made the move from South Dakota. Now, nearly three decades on, he officially entered retirement Friday at the end of the semester but said students and staff still likely haven’t seen the last of him.

“If I miss something, I can always come back on Monday,” he laughed.

The classroom is being handed over to his student teacher, who studied under Stormo for the fall semester and is now ready to lead the room.

When he was deciding whether to retire at the end of last school year or this one, Stormo said he and the district eventually landed on having him leave mid-year in order to accommodate this more gradual transition.

Still, staff in the school’s science department took the opportunity to say goodbye to their longtime colleague Friday morning while students had the day off to celebrate the end of term. Stormo said they gave him an old copy of an introductory physics textbook that had never been handed out.

In the table of contents, they wrote their names next their favorite labs. On the corresponding pages, they left notes for Stormo, who had also served as department coordinator and National Honor Society advisor prior to his retirement.

Throughout his tenure, he taught ninth-grade science and upper-level physics classes — something he’d been doing prior to his arrival in Minnesota as a teacher at Vermillion High School in South Dakota.

In both states, Stormo also taught driver’s education. Pulling out his phone, he did a quick calculation of how many students had learned the rules of the road on his watch. He came up with close to 5,000.

On Tuesdays, Stormo would often be leading driver’s education after school and then a night class at Riverland Community College, starting around 7:30 a.m. and finishing after 10 p.m. The South Dakota State University grad insisted that, even on his long days, he never thought, “I have to go to work.”

For Stormo, one of the highlights of also working at Riverland was getting to know students who had so many different reasons for being there. “There were all kinds of people with different motivations.”

He added that college students were typically choosing to be in the classroom, whereas teenagers were often required to take his classes at the high school. Even if they avoided science as soon as they left his lab, Stormo noted that his main goal as an educator was to teach them how to think through things on their own.

Looking back, he said a few of the highlights of his career are having been selected as “Teacher of the Year” twice — once by students in Vermillion, once by staff in Owatonna.

A few years ago, he added that he was also selected by students to be one of the few staff members on stage at graduation.

“When I was sitting there during the ceremony with all those seniors coming up and smiling and saying ‘Thank you,’” recalled Stormo, “that was really cool.”

Going forward, he said he’s not leaving the classroom entirely. He’ll be back teaching at Riverland for the upcoming semester. Otherwise, he said retired life will be about traveling with his wife — who’s also no longer working — and remaining active at St. John Lutheran Church as treasurer, foundation board member and handbell choir participant.

Additionally, Stormo said he’s looking forward to getting involved with Owatonna Steele County Amateur Radio, a group of enthusiasts connecting to the airwaves for recreational purposes. Still, thinking about leaving the high school, Stormo said it’s been a bit of a shock arriving at the moment.

“Forever and ever, when somebody asked me where I worked, I’d say I worked for the Owatonna Public Schools. I was always proud of that. Then a month ago, it was a gut punch,” said Stormo, of the realization he’d no longer be able to do that.

After the question came up again just this past week, he mentioned his impending retirement and the person who was asking changed the question to, ‘Where did you work?’ Stormo said, ‘I worked for the Owatonna Public Schools.’ In a way, he added, that response helped him come to terms a little bit more with the transition.

“I’ll be proud of that for the rest of my life,” he said.