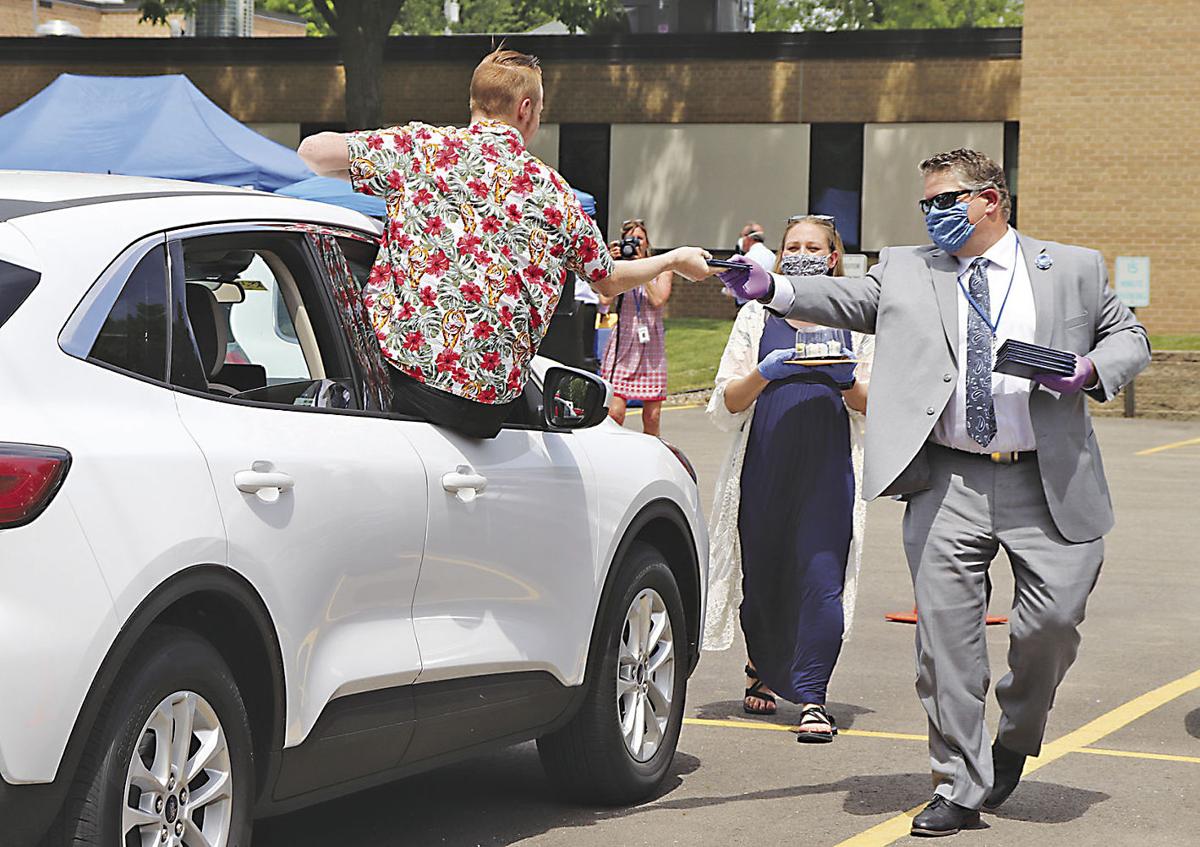 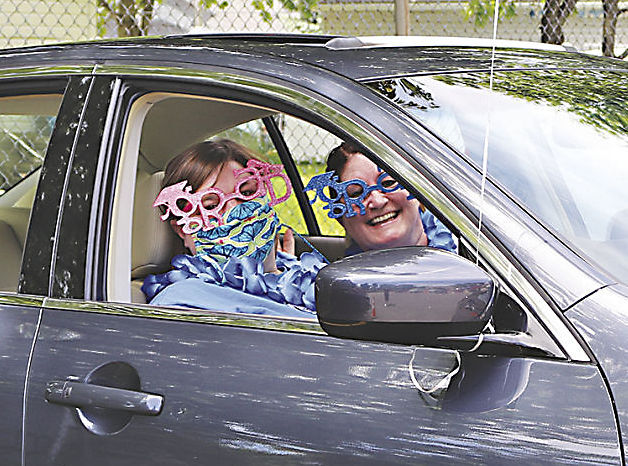 Throughout the program, car horns were honked and cheers went up from the 20-some vehicles spaced throughout the parking lot. When it was time to present diploma covers to students, families honked their horns to identify themselves and staff delivered everything directly to their door. (Bridget Kranz/People’s Press)

Throughout the program, car horns were honked and cheers went up from the 20-some vehicles spaced throughout the parking lot. When it was time to present diploma covers to students, families honked their horns to identify themselves and staff delivered everything directly to their door. (Bridget Kranz/People’s Press)

Nature added its own music to “Pomp and Circumstance” Thursday afternoon, as the Owatonna Area Learning Center honored 25 graduating seniors in the parking lot of the school district office.

Coming down the ramp off Bridge Street, students and their families were ushered into alternating parking spots — every other stall blocked off with a cone to try and ensure 6 feet between occupants. Windows down, they were able to hear the music played from a speaker at the front of the lot, mixed with the birds chirping and leaves rustling in the surrounding trees.

Both before and after the program, graduates had the opportunity to have a photo taken with their family in front of a blue-and-white ballooned backdrop on the grass near the building.

Under a tent just outside the offices were Superintendent Jeff Elstad, members of the ALC staff and two student performers — senior Adora Elmore who sang “Where Is The Love?” by The Black Eyed Peas, and Tajanea Thomas, who gave a short speech to her classmates after graduating a year early. In her speech, Thomas thanked her teachers and family for supporting her and helping her get her diploma in three years.

“They helped me get through this year. It was long and hard,” she said. “But I did it and I’m glad I did it … I’m pretty proud of myself.” Cheers went up out of car windows, with attendees yelling back, “I’m proud of you, too!”

“She really pushed through hard and kept going,” Principal Jim Kiefer added at the end of Thomas’ speech.

Kiefer helped kick off the ceremony with a reflection on students’ time at the ALC. He recalled meeting with each of the graduates in their first intake meeting, a tradition upon arriving at the center to help staff learn students’ stories and goals. Similar to advice he had given throughout the year, Kiefer reminded graduates to show up, stay engaged and be kind.

In addition to the seniors, math teacher Ray Ostfeld was honored at the ceremony for his role as advisor to the school’s Minnesota Association of Alternative Programs’ STARS program. An acronym for “success, teamwork, achievement, recognition and self-esteem,” there are MAAP STARS groups in alternative learning settings across the state, providing leadership training and volunteer opportunities for participants.

Ostfeld was named advisor of the year for the entire state of Minnesota, a recognition that Kiefer surprised him at the ceremony.

After Ostfeld and Thomas’ remarks, staff read out the names of the graduates as Elstad and other educators went around to car windows, handing out diplomas, Owatonna-themed masks and personal cakes to celebrate.

When each name was read, that family’s car would honk and — masked and gloved — staff would bring everything to the window. Throughout the ceremony, including Elmore’s song, Thomas’ speech and the presentation of the graduates, attendees were clapping out of the 20-some cars and honking their horns to show support for their own students and others.