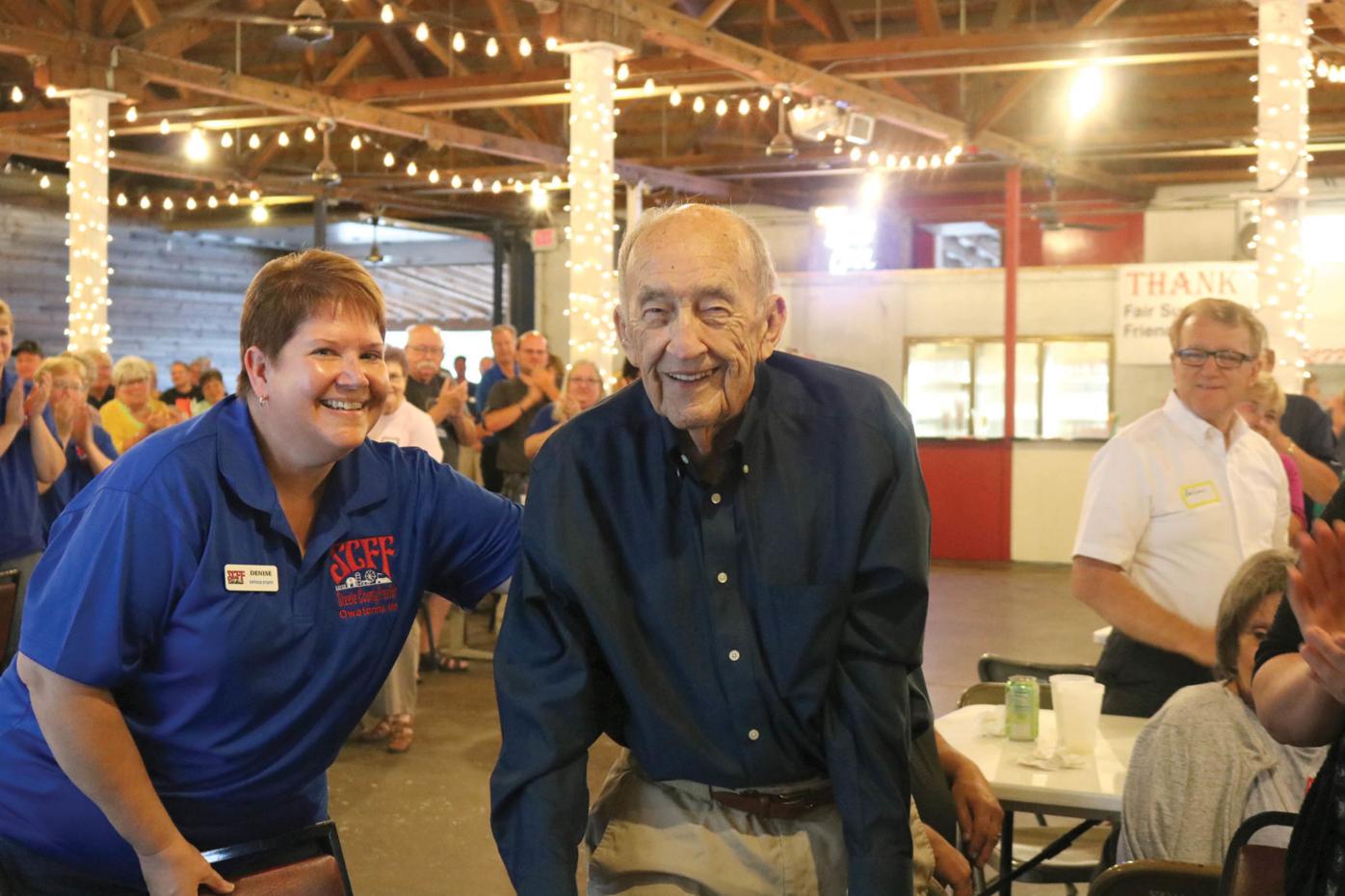 During the 2019 Steele County Free Fair Volunteer Appreciation Supper, Dick Reinhardt was recognized for his 59 years of service to the fair. Reinhardt died Wednesday night at the age of 95 after a lifetime of supporting and loving fairs. (File photo/southernminn.com) 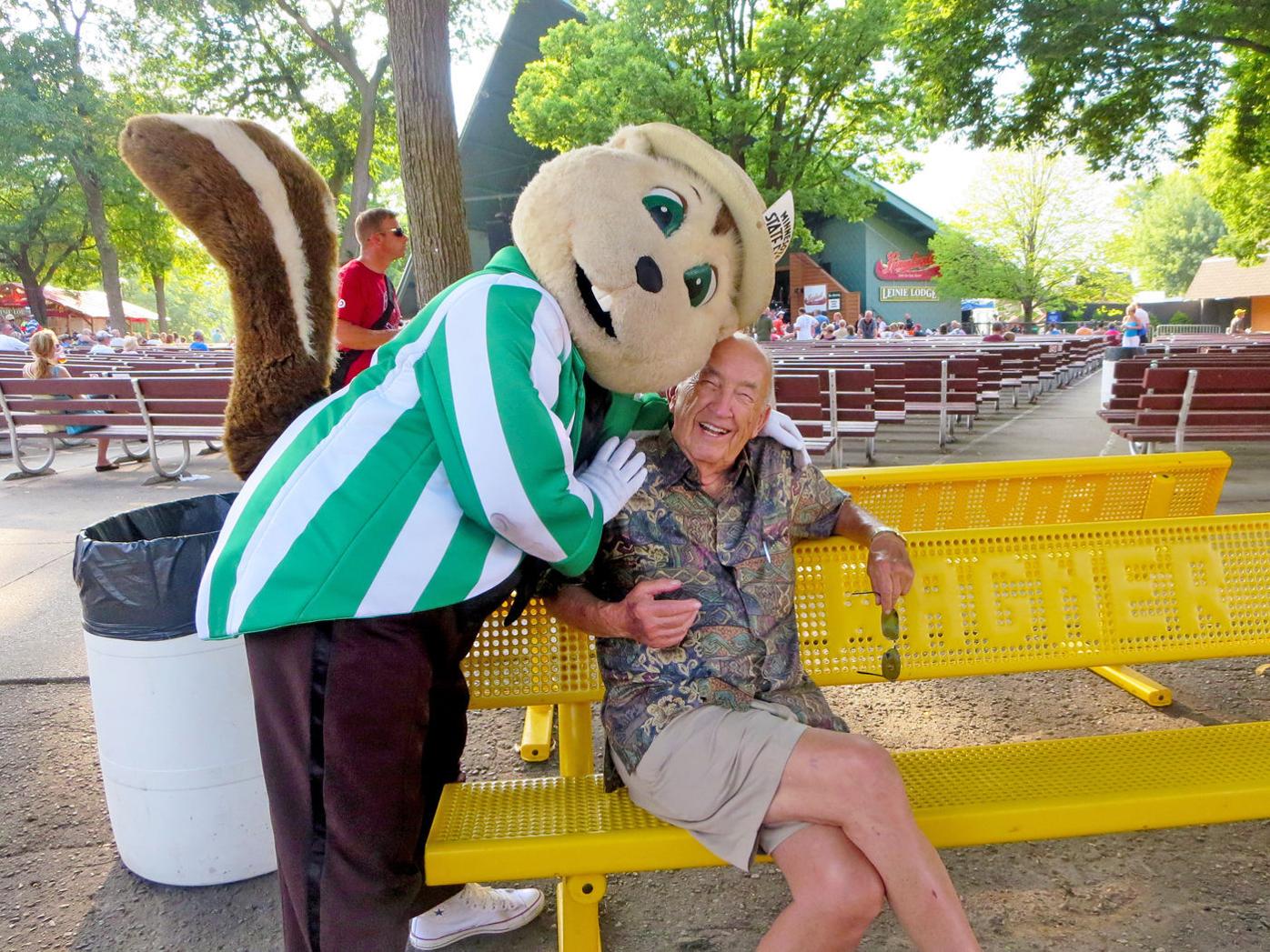 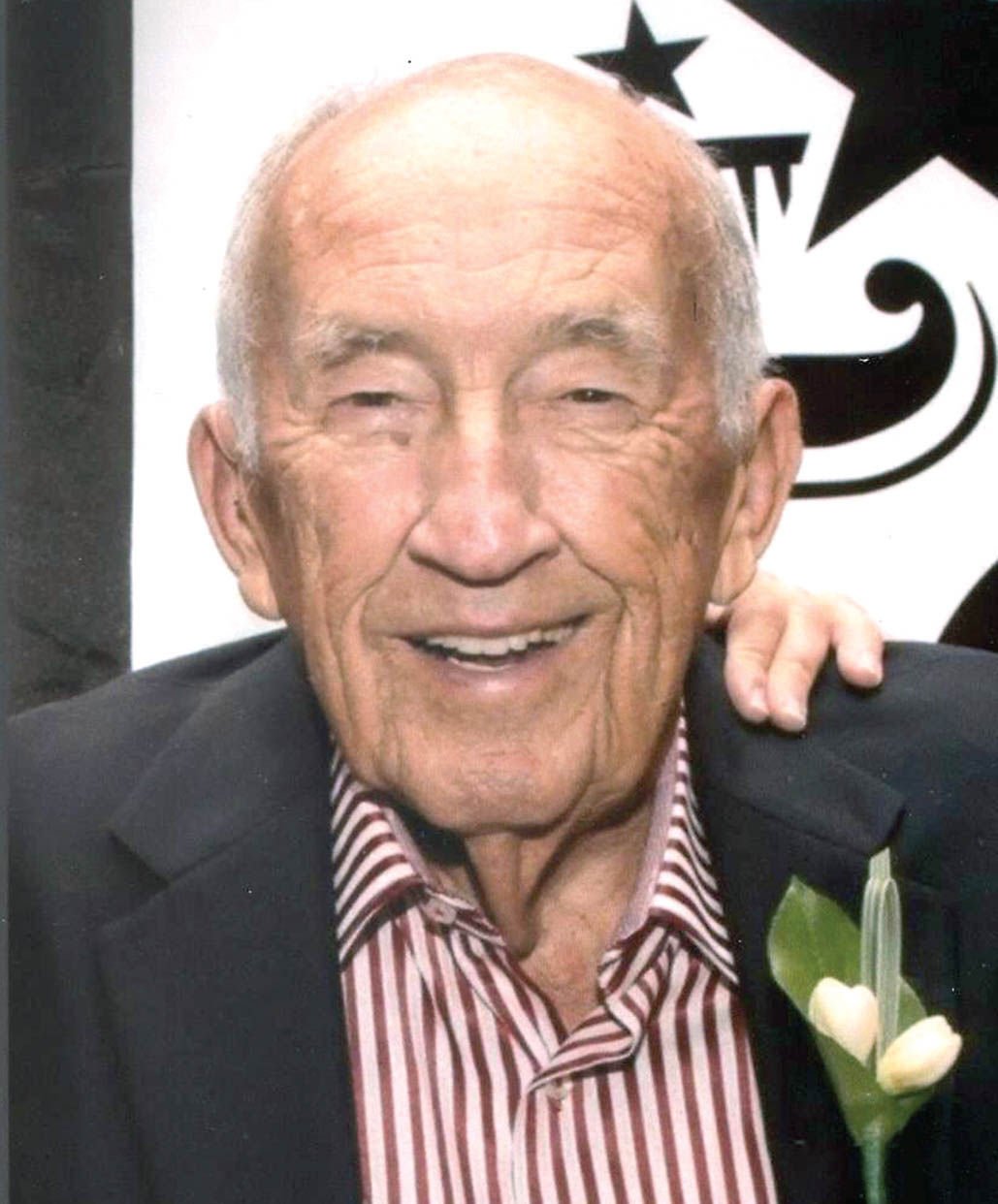 During the 2019 Steele County Free Fair Volunteer Appreciation Supper, Dick Reinhardt was recognized for his 59 years of service to the fair. Reinhardt died Wednesday night at the age of 95 after a lifetime of supporting and loving fairs. (File photo/southernminn.com)

Fairs across the region are mourning the death of one of their biggest supporters and greatest friends.

Dick Reinhardt, a longtime lover of fairs and Steele County Free Fair volunteer for 61 years, died Wednesday night. He was 95.

Friends of the fair describe Reinhardt as professional, caring, and someone who always had a smile plastered across his face. He was first elected to the Steele County Fair Board in 1959 after working with the fair’s treasurer for four years. After that, he was employed by Federated Insurance as an auditor for 44 years before retiring in 1987. While on the fair board, Reinhardt was the treasurer from 1959 to 1996 — 37 years. From 1997 to 2016 he served as the fair’s director of hospitality and of the bank.

After turning 90 in 2016, Reinhardt announced that he would be retiring from the Board of Directors. Following the 2016 fair, the directors unanimously voted to name Reinhardt director emeritus. As director emeritus, Reinhardt was no longer a voting member of the board, but was still invited to attend meetings and noon lunches during fair week.

While few Steele County residents have memories that predate Reinhardt’s time at the local fair, his passion for fairs stretched well beyond the county lines. For more than half a century, Reinhardt was a crucial member of the staff at the Minnesota State Fair, heading up the finance division and serving as keeper of the attendance numbers.

“What a cool guy,” said Jerry Hammer, general manager of the state fair who worked with Reinhardt for 17 years at the Great Minnesota Get Together. “I absolutely am going to miss him, but after just one day I already smile when I think of him. It’s hard to articulate, but he is absolutely still here.”

During his many years at the state fair, Hammer said Reinhardt had a daily ritual of a one-man parade through the fair down to the manager’s office to deliver the coveted attendance records for the previous day.

“If you were around the fair for more than 20 minutes you knew Dick Reinhardt,” Hammer said. “He knew so many people from every side of the fair – from agriculture to competitors to the carnival and commercial exhibitors and food vendors. When he would walk up to the administration building, all along the way everyone knew who he was and were excited to hear about the numbers, but he never let anything slip until he delivered the report to us.”

For most of his time at the state fair, Hammer said Reinhardt’s ticket audit department had to manually verify every single ticket with numbers in the millions.

“That’s what Dick did and he loved it,” Hammer said. “And that smile — he was always smiling. That smile was always there.”

The smile seen around the state fairgrounds was even more of a staple in Owatonna during county fair week, where Reinhardt left an imprint on the entire free fair family. James “Corky” Ebeling said when he first joined the fair board that Reinhardt was quick to take him under his wing.

“He was known to everybody because he had been around for so long — long before my time,” Ebeling said. “He was a very social person, extremely nice, and was just one of those people where you couldn’t help but like him.”

Above everything else, though, Ebeling says Reinhardt deeply loved fairs. Legend has it that Reinhardt’s first interaction with the Steele County Free Fair was when he was only 11 and he helped sell midway tickets. Ever since then, Reinhardt and the fair went together like fireworks and the Fourth of July.

“It was evident that come fair season and once our fair was here that Dick was at the top of the world,” Ebeling said. “He was a fixture here — his smiling face and the way he would greet everyone in the morning and at night. Then as soon as our fair ended he had his bags packed and was up at the state fair for the full two weeks.”

According to Rhonda Bennett, who was one of Reinhardt’s pupils in the bank at the fair for many years, one week just wasn’t enough for the fair fanatic. Regardless of Reinhardt’s enjoyment and love of the state fair, however, Bennett said that the Steele County Free Fair was the event that truly captured his heart.

“It’s hard to explain how much he means to us here at the fair,” Reinhardt said. “He always said the fair just gets in your blood, and he’s right. But a lot of that is because of him, too. He was just a very special guy.”

While being a fair fanatic was a large part of his identity, Reinhardt was community-minded and family-oriented. One of his nephews, Steve Reinhardt, said his uncle was a “good Christian man” who was a great uncle.

“He was so good to me and my brothers,” Steve Reinhardt said. “When we were young kids at the Owatonna fair he would give us pass books for all the rides, and when he worked at the state fair and there was a show I wanted to see he always made sure I could get good seats.”

Steve Reinhardt said his uncle was also an extremely grateful person who was just happy to be a part of something — whether it be helping start the Little Theatre of Owatonna or his many affiliations with the county and state fairs.

As the Steele County Free Fair approaches and hits the one-month countdown, friends and family know there will be a big hole to fill with the absence of their much-loved friend.

“It’s going to be hard,” said Steve Reinhardt, whose band The Fabulous Love Handles performs every Tuesday night of the fair on the United Prairie Bank stage in Fair Square.

“It’s going to be really different,” Ebeling said, adding that he will always think of Dick Reinhardt when he sees the flowers around the fair. “He loved the flowers and was huge on getting them taken care of and watered, they were his babies. He was big on the beautification of the fairgrounds and he really wanted it to be beautiful.”

Even as big as the state fair is, it’s going to be hard not to notice Reinhardt’s absence, said Hammer.

“In the 12 days of the state fair you live about 12 months-worth of life with so many things going on,” Hammer said. “What you absolutely need in order to make it through that is Dick’s philosophy, which is to stay even keeled, never get too high or get too low, and as he always said ‘count them when you’re done.’”

Bennett knows that the legacy of her good friend and mentor will live on and on for as long as the Steele County Free Fair continues to be enjoyed by the masses.

“He always wanted the fair to be fun and for people to enjoy the fair — I think that was really always his ultimate goal,” Bennett said. “He would want us to love the fair as much as he did and for it to be a place where we can all be together like a family.”

FROM THE FAIR PRESIDENT

"Dick Reinhardt poured his heart and soul into the Steele County Free Fair for his entire lifetime," said Fair Board President Dan Deml. "So much of what you see out here today has been the result of Dick’s input over the last 60-plus years. We will forever miss input and contributions."

In the upcoming weeks, the Steele County Fair Board will discuss with Reinhardt's family how to physically memorialize him on the fairgrounds.