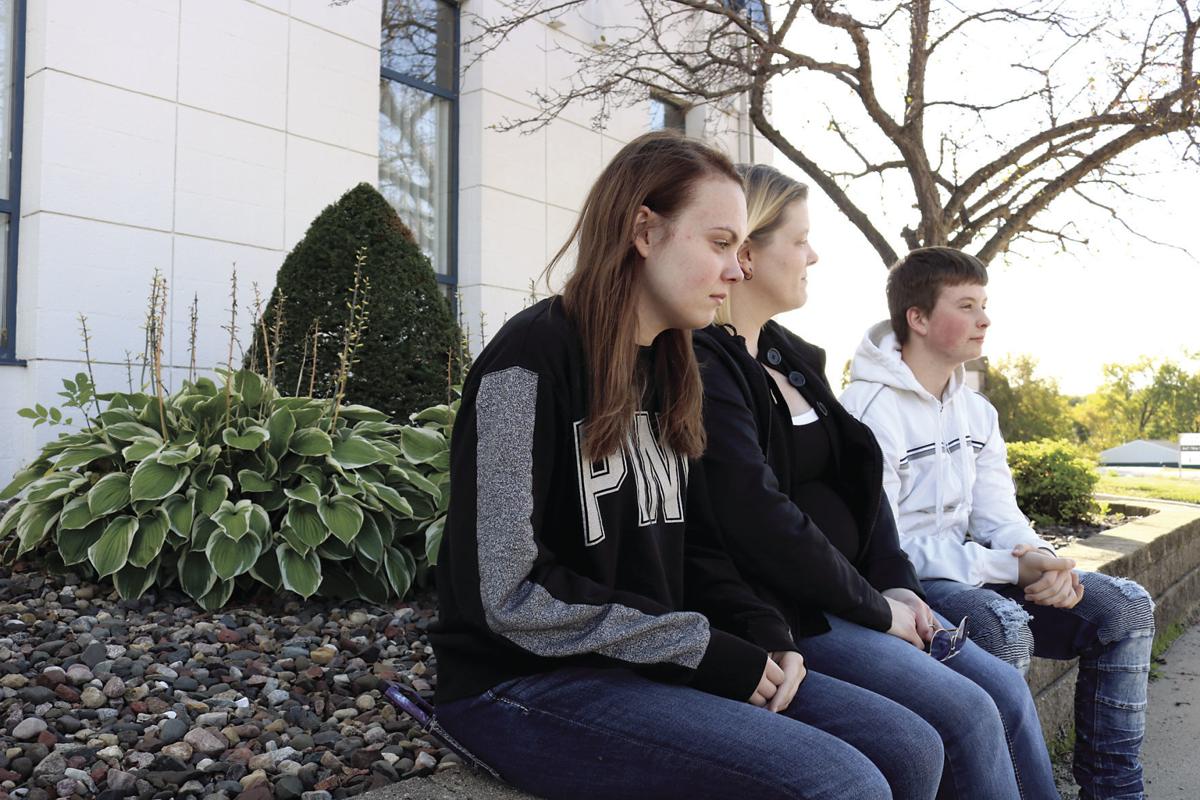 Angela Erickson sits between her children, Justice and John McGuire, as they take a quick breather after what as been a long, painful two weeks. On Sept. 24, Angela was informed that John McGuire, the father of her two teenagers, was found dead in West Virginia in what is suspected to be foul play. (Annie Granlund/People’s Press)

OWATONNA — Like most teenage girls, Justice McGuire didn’t always have the best relationship with her father. Sometimes they disagreed, sometimes they fought, and sometimes they wouldn’t speak to each other, but they never let that come between them.

Her dad — John “Bamma” McGuire — had last made contact with family and friends in February, texting with the mother of his teenage children, Justice and Jacob McGuire.

On Sept. 24, the family was notified that John’s remains had been located in a shallow grave in West Virginia and that officials suspected foul play. On Monday, Oct. 7, Anna Marie Choudhry was charged with the John’s murder in the first degree, as well as conspiracy and concealment of a deceased human body. According to court documents, Choudhry had planned the murder with her sister, Amanda Michelle Naylor McClure, who was John’s girlfriend. McClure has also been charged with concealment of a deceased human body.

According to the criminal complaint, John’s date of death has been listed as Feb. 14. He was 38.

“It was clear after Mother’s Day went by and he didn’t call that something was wrong,” said Angela Erickson of Owatonna, mother of Justice and Jacob. “He always called me and his own mom to tell us what good mothers we were.”

“When he didn’t call after my birthday I pretty much just started to prepare myself for the worst,” Jacob added, noting that his father would have never missed his birthday this summer, especially since he had turned 16.

In June, Angela and Justice went together to file a missing person report with the Owatonna Police Department. They didn’t know really what to expect, but Justice stated that it was simply surreal.

“I think we all thought that we would file this report and then call us tomorrow that everything was fine and he was fine,” Angela said.

“People would say that they saw him walking somewhere,” Justice stated. “That really hurt me, because I knew that if he was back he would have called.”

In the last two weeks, the family stated that it has been overwhelming to not only receive the news that the man they loved was gone, but that he had been a victim of a violent crime. It has been specifically hard for them to swallow as John was well known for his big heart and his love of everyone around him.

“He had a heart of gold, the gift of gab, and he was friends with everyone,” Angela said with a smile. “I’m going to miss everything about him.”

Though John and Angela hadn’t been together for a number of years, they still actively co-parented together. This included John loving his children’s half-sibling just as his own, always including her in their activities and outings and loving her all the same.

“He always tried to be there for her the best he could be,” Angela said. “John had some hard times and made some bad choices, but he was a good person.”

Angela and the kids make it no secret that John had some different struggles in life, specifically surrounding substance abuse, but they assert that his heart was always in the right place and that he was above all else a selfless man.

“He always went the extra mile to comfort you and make sure you felt safe and protected,” Angela said. “After he left and we didn’t hear from him, I just kept thinking that maybe he was off to go get help, to get better and be better. It’s what he always wanted.”

Over the past couple weeks since learning of John’s death, Angela, Justice and Jacob admit that it’s been hard to see or hear people trying to drag his name through the mud — whether it be bringing up his past or making up lies. Angela stated that they try their best to bite their tongues, but that it is simply only making the grieving process harder.

“Just because someone has had problems it does not make them a bad person,” she said. “No one deserves to die like this.”

When John left Owatonna earlier in the year, Angela said that he was heading on a road trip with his girlfriend at the time, McClure. The plan was to eventually make it down to Alabama to visit John’s mother.

“The last time I talked to him it’s almost like he knew something was going to happen,” Angela said through tears. “I was worried about the kids and he just told me, ‘Please don’t worry, I’m always looking out for them even when I’m not there. Trust me.’”

“He wasn’t always there for us, but he was,” Justice said in a somber tone. “I think we still have him now watching over us.”

Though the grief has been overwhelming more days than not, Angela and her kids do find time to remember all the best parts of John. They burst into a fit of laughter as they described the goofy games John would play with the kids when they were little and teased about how proud he was of his nickname, “Bamma.”

“It set him apart from everyone else,” Angela said with a fond smile, stating that the name “Bamma” originally started because of Alabama being John’s home state. “I remember when we first met he first said ‘I love you, baby’ with that thick southern accent.”

“I will always remember that,” she continued. “That’s what John did. He made his mark everywhere.”

In the days following the discovery of John’s remains, a Facebook fundraiser was set up by the mother of Justice’s boyfriend, Carleen Kempe, who the family stated has been a God-sent during their time of tragedy. The fundraiser is to help Justice and Jacob bring their father back to Owatonna for a proper ceremony.

John was the father of six children who reside in Owatonna, Medford, New Richland, and South Dakota.