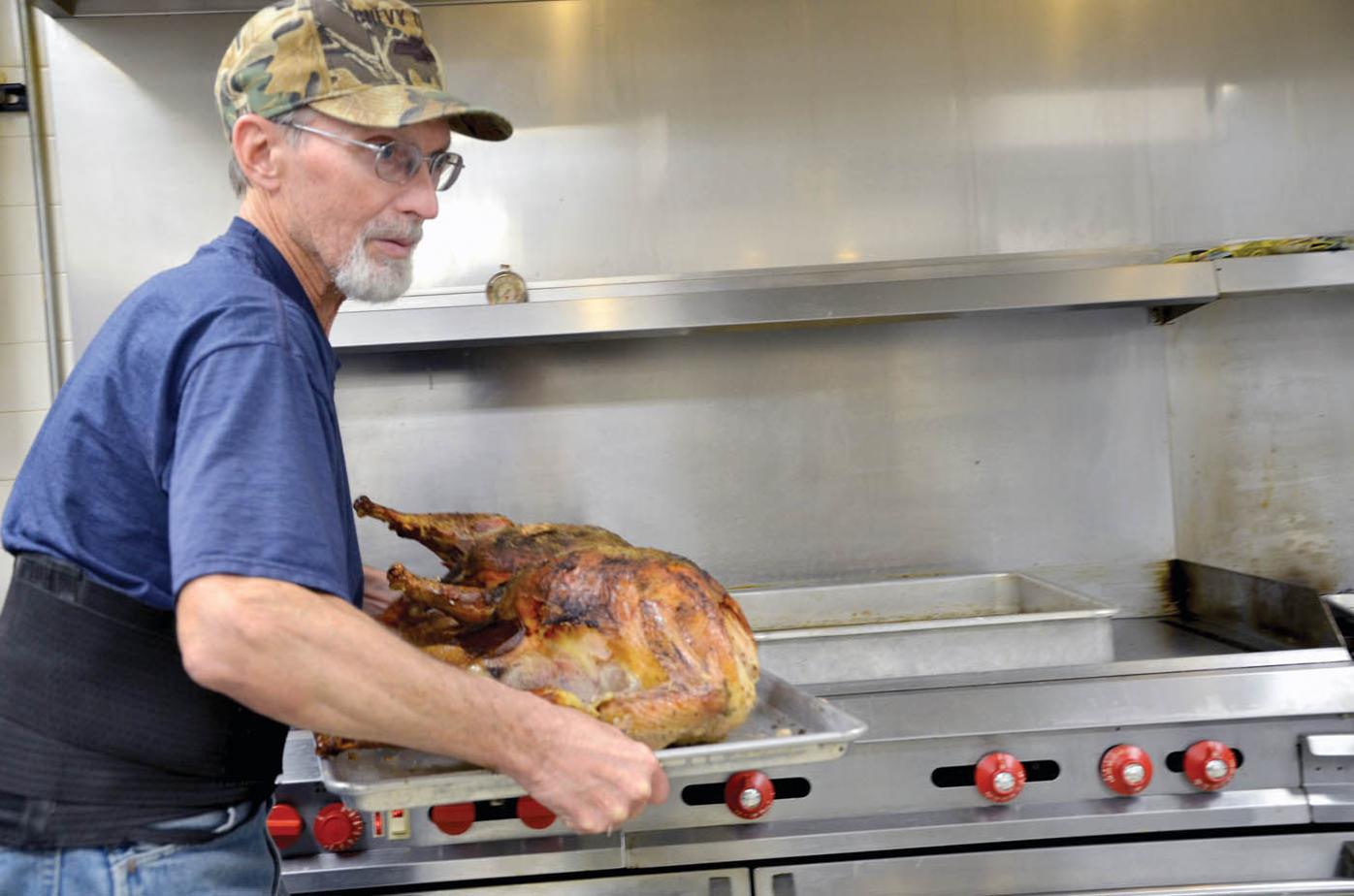 Terry Prokopec carries two turkeys to his carving station Tuesday afternoon at the Owatonna VFW. Prokopec was one of five volunteers carving turkeys ahead of the Community Thanksgiving Dinner. (Ashley Stewart/People’s Press) 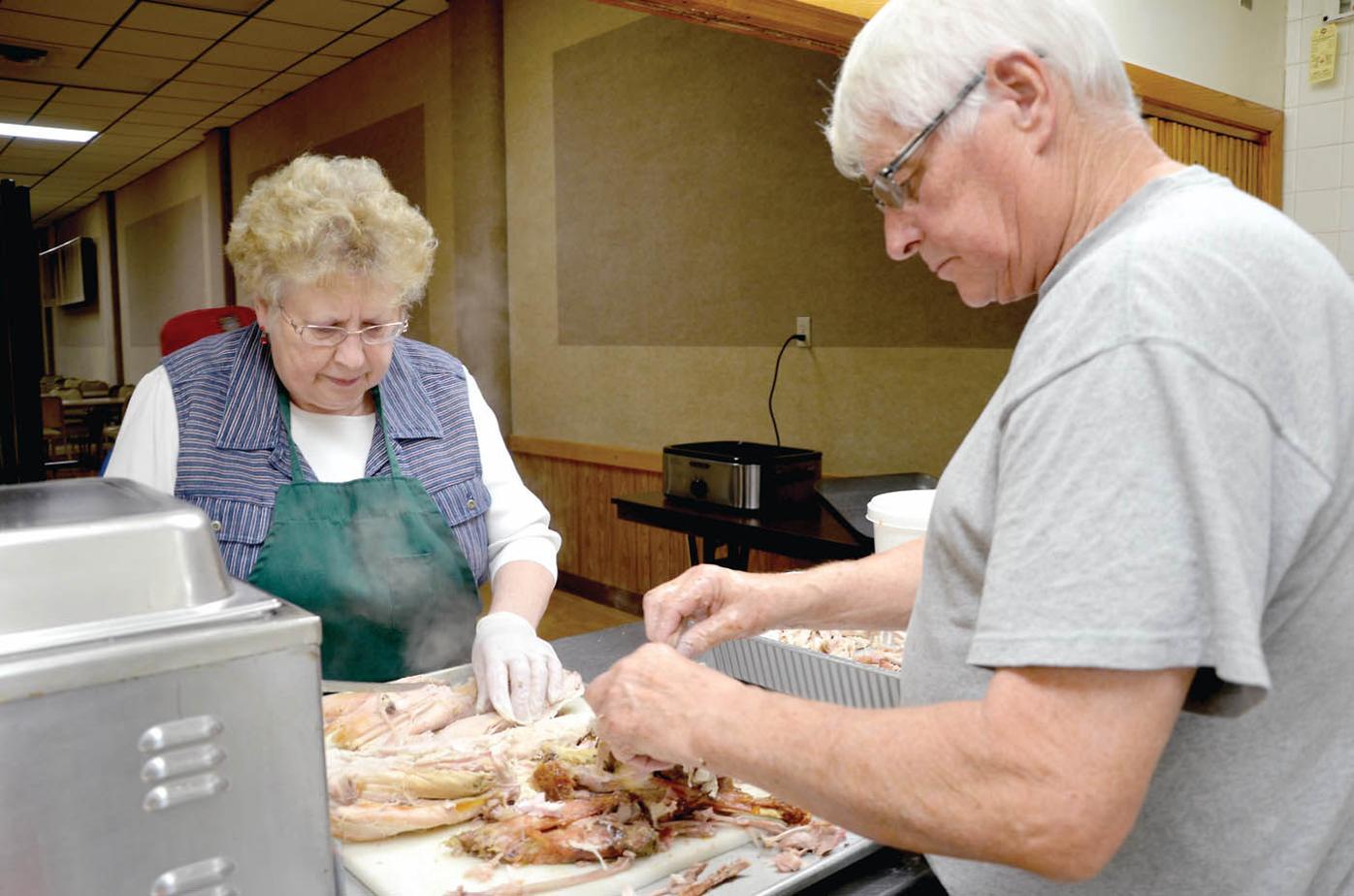 Terry Prokopec carries two turkeys to his carving station Tuesday afternoon at the Owatonna VFW. Prokopec was one of five volunteers carving turkeys ahead of the Community Thanksgiving Dinner. (Ashley Stewart/People’s Press)

But come Thursday, hundreds of people will file through the hall for dinner.

“We served 1,100 people last year,” said Trudy Pierce, who coordinates the dinner with her husband, Mike. “That was our record.”

And Mike Pierce said they’ll likely see a large turnout again this year because of the forecast.

“When the weather is bad, instead of traveling, more people stay home, so we see more people here,” he said.

According to the National Weather Service, Thanksgiving will be riddled with precipitation. There is a 70 percent chance of precipitation — rain, sleet and snow — during the day with the temperature falling to 29 degrees by 5 p.m. New snow and sleet accumulation of 1 to 3 inches is possible.

That’s what brought the couple and three others to the VFW Hall on Tuesday.

About 20 turkeys filled ovens and roasters in the kitchen while volunteers carved the cooked ones.

“We have seven pans of turkey carved already, but we need 20,” said Mike Pierce, who had been cooking turkeys since 6 a.m., around noon. “We have a little ways to go yet.”

Mike Pierce said the volunteers will likely be carving turkey until 9 p.m. with a two-hour break for the cooking of Windsor chops for a veterans’ supper.

And this year, 46 whole turkeys were donated to the community dinner.

“That is more than we usually get,” Mike Pierce said. “We got big ones and a lot of small ones.”

And that may not be enough for the dinner.

The trimmed turkey is stored in the refrigerator until Thursday morning when it is warmed in ovens for the dinner.

The turkey is only the start of dinner preparation for the volunteers.

They will return to the VFW Hall on Wednesday to make salads and dressing and cut desserts for take-out boxes, and on Thanksgiving morning, the remainder of the food will be cooked.

The volunteers prepare and cook food to accommodate 1,000 people.

“We’ve never run out,” Mike Pierce said. “We’ve been close, but we never have.”

Last year, about 629 take-out orders were delivered and about 500 community members were served at the VFW Hall, Trudy Pierce said.

The community Thanksgiving meal will be served from 11 a.m. to 2 p.m. Thursday.

“It’s about people spending the holiday alone,” Trudy Pierce said. “Anyone can come, young, old, rich or poor. It’s for socializing because being alone on the holidays is tough.”

This will be the Pierces’ 11th year coordinating the community dinners on Thanksgiving and Christmas at the VFW Hall, and when asked why they do it, Trudy Pierce said it’s because she and her husband enjoy helping people.

“We love doing it,” she said. “Where would people go to eat if they’re alone otherwise?”

The meal is free, but donations are welcome.

Trudy Pierce said take-out orders, which are limited to three this year, can only be called in on Thursday.

“You’re not really alone if there’s more than that,” she said. “Anyone is welcome to eat down here though.”

Reach reporter Ashley Stewart at 444-2378 or follow her on Twitter.com @OPPashley