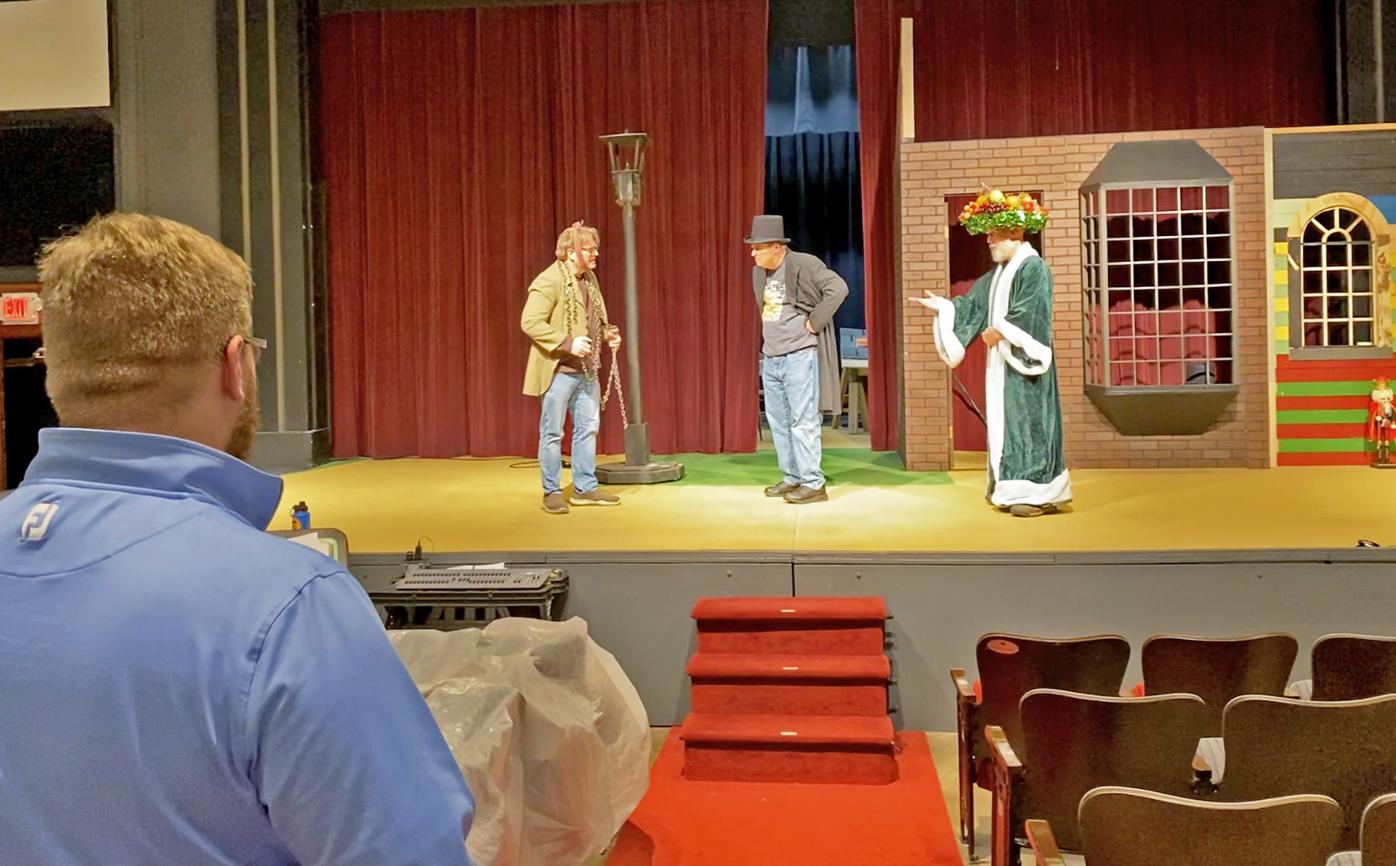 Director Zack Knapton said this production has been unique for him as he has the opportunity to direct his mentor, Jeffrey Jackson. (Emily Kahnke/southerminn.com) 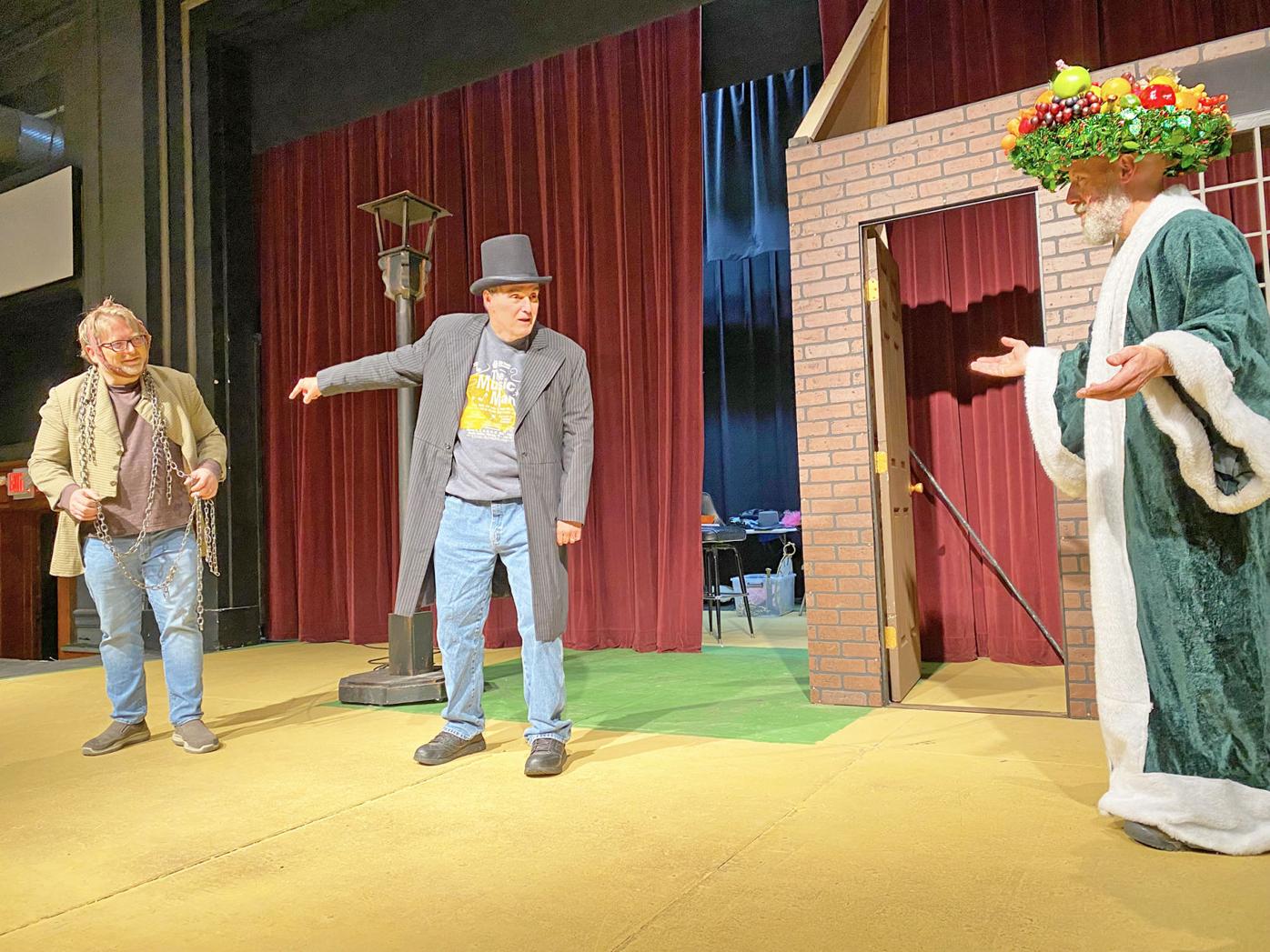 Jeffrey Jackson (middle) joked that he and his fellow cast members, David Philips (left) and Matt Jessop (right), were all typecast and fitting for their respective characters. (Emily Kahnke/southerminn.com)

Director Zack Knapton said this production has been unique for him as he has the opportunity to direct his mentor, Jeffrey Jackson. (Emily Kahnke/southerminn.com)

Jeffrey Jackson (middle) joked that he and his fellow cast members, David Philips (left) and Matt Jessop (right), were all typecast and fitting for their respective characters. (Emily Kahnke/southerminn.com)

The Little Theatre of Owatonna is getting into the Christmas spirit, to put it mildly.

The winter production of “Every Christmas Story Ever Told (And Then Some)” is proving to be special in various ways for members of the cast and crew.

The story follows three actors as they grapple over which holiday classic they’re going to perform. Over the course of the show, they decide to delve into all of the Christmas tales from around the world. From “How the Grinch Stole Christmas” to “The Gift of the Magi” to dances from the “Nutcracker,” there’s some holiday spirit for everyone according to Director Zack Knapton.

Knapton has been interested in theater for as long as he can remember. He has spent time on stage and backstage and everywhere in between. This production, for him, is unique and special because he is able to direct his mentor, Jeffrey Jackson.

“I worked under Jeffrey as an apprentice director while he directed ‘The Odd Couple,’” Knapton said. “Now I get to direct him on stage and it has been so fun and unique for me.”

Jackson has graced the director’s chair for 10 or so productions since his arrival to Owatonna in 2004, but this is his first time on stage in a main role for several years. Now that he is retired, Jackson hopes to be able to both direct and act at least once per season. He admits it’s been difficult for him at times to not be a “backseat driver” when it comes to the production.

“Going from director to actor is difficult,” Jackson laughed. “ I’ve had to apologize to Zack on more than one occasion.”

Knapton said the production is a collaborative effort with everyone and having an experienced actor and director to offer guidance has been beneficial.

“Jeffrey has done better at being an actor instead of a director better than he thinks he has,” Knapton said.

Matt Jessop is also taking the stage at the Little Theatre for the second time since 2018. This production is special for him because his son is part of the crew. He discussed how being in productions together has been great for some father-son bonding.

“My first play was ‘It’s A Wonderful Life,’ which was nice because it was set as a radio play so our scripts were in hand,” Jessop said. “This has been such a fun one to be involved in, especially because my son will be a part of the crew. Being able to have this experience together makes it that much more fun as a dad.”

David Philips rounds out the trio of actors for this production.

All three men agree that they identify with their characters on many levels. Jackson joked that they all had been typecast, especially him because he describes his character as a bit of a “curmudgeon,” which he can relate to.

Philips said he’s excited to have a main part in this production. He’s been in several shows, but this is the biggest part he’s had, which has been both a challenge and fun.

“I think I play the comic relief,” Philips said. “It’s been really fun to connect with the character and with Jeffrey and Matt because we play well off of each other.”

The cast and crew are about three weeks into rehearsal, with opening night being Friday, Dec. 3. Tickets for Little Theatre of Owatonna members are available now. General public will be able to purchase their tickets as early as next week.