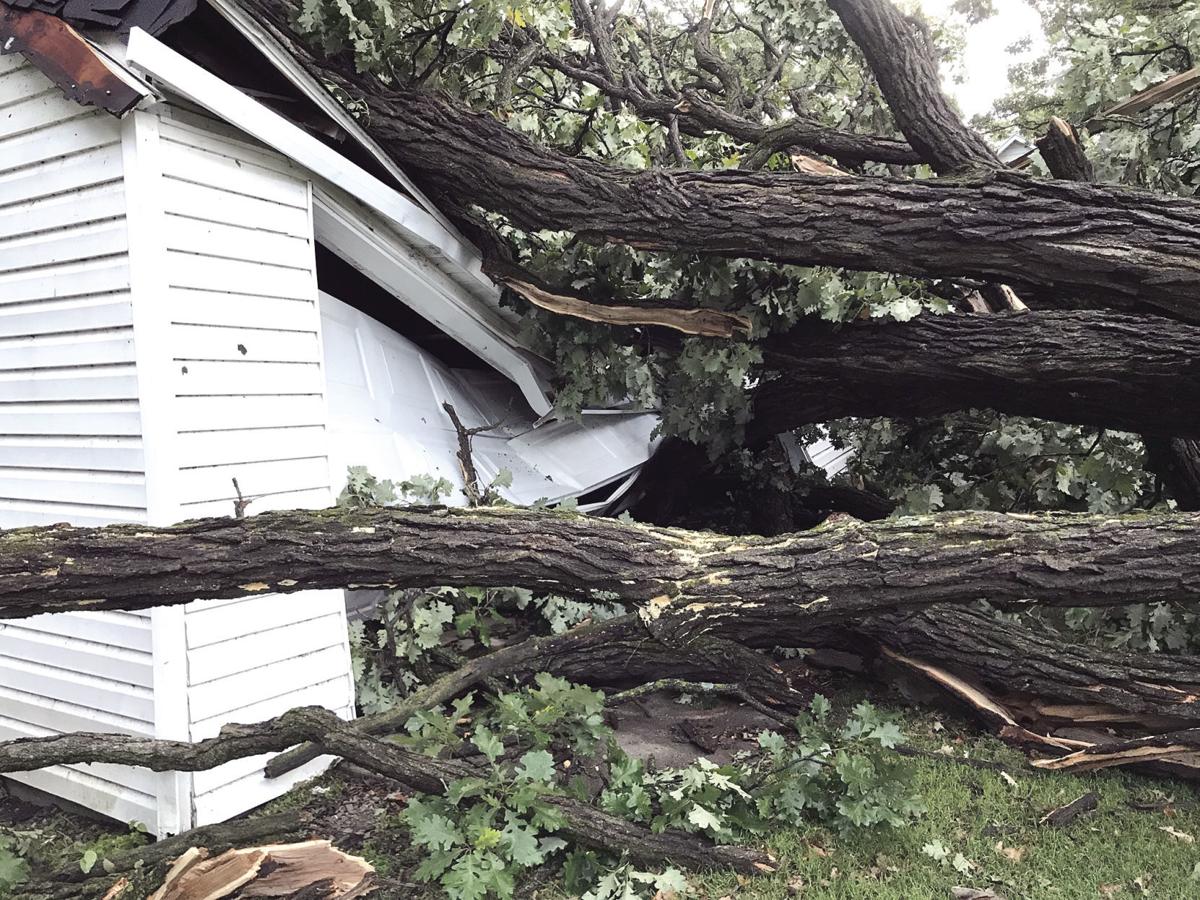 A tree came down on to a garage at a residence eight miles south of Owatonna during a thunderstorm that resulted in a tornado warning in the southeastern corner of Steele County on Tuesday night. (Submitted photo) 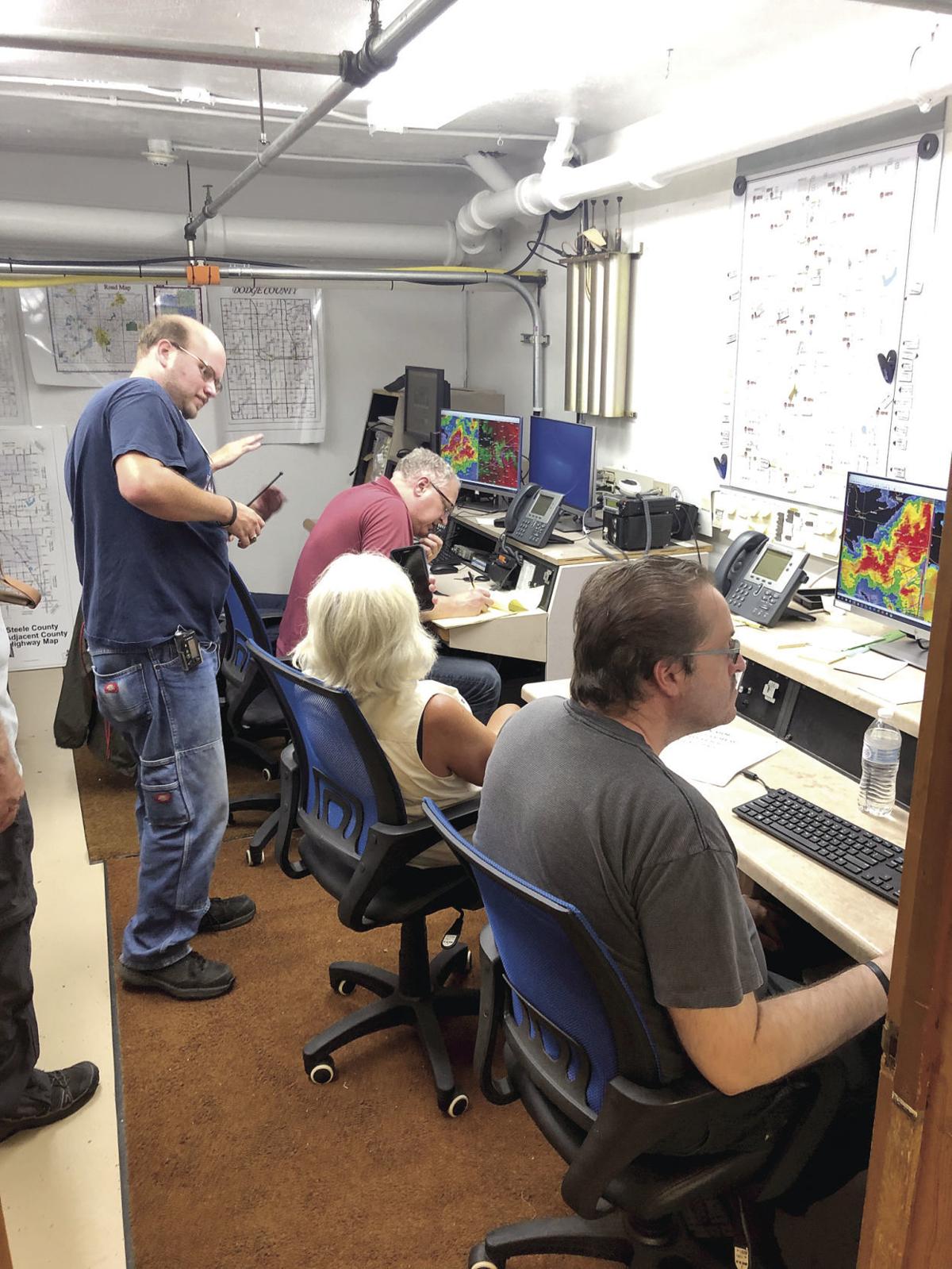 SKYWARN volunteers closely watch the movement of two cells on Tuesday night in the basement of the Owatonna Fire Station. (Submitted photo) 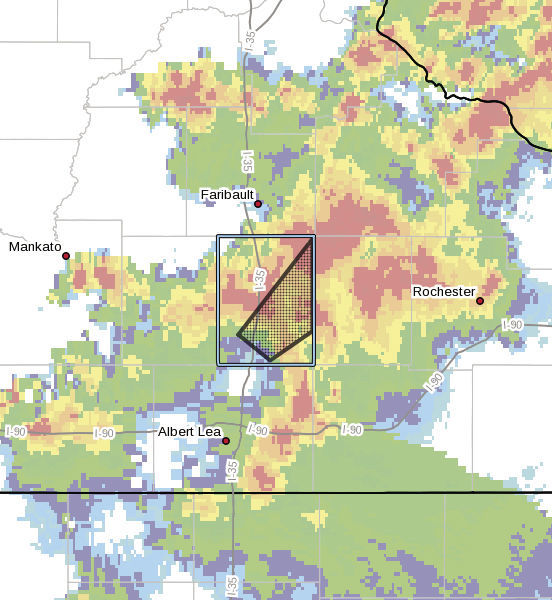 A tree came down on to a garage at a residence eight miles south of Owatonna during a thunderstorm that resulted in a tornado warning in the southeastern corner of Steele County on Tuesday night. (Submitted photo)

SKYWARN volunteers closely watch the movement of two cells on Tuesday night in the basement of the Owatonna Fire Station. (Submitted photo)

OWATONNA — It’s been barely more than a year since a giant storm littered with tornadoes ripped through the region leaving massive destruction in its wake. On Tuesday night, those in Steele County were quickly reminded of the power and speed that comes with fall storms.

According to the National Weather Service in Chanhassen, a severe thunderstorm capable of producing a tornado was located near Ellendale, roughly 11 miles south of Owatonna, moving northeast at 45 miles per hour. It was indicated that radar had picked up rotation and that quarter-sized hail could be formed.

“The storms [Tuesday] popped up relatively quick and moved across the area very quickly, but we did have pre-warnings from the National Weather Service and were able to activate our spotters,” said Mike Johnson the emergency management director for Steele County. “There were a couple different cells we were watching closely and we had reports of some high winds and hail in areas, but we didn’t receive any damage reports.”

Johnson quickly added that while he didn’t receive any damage reports it doesn’t mean that there wasn’t any. Several people sent photos to the People’s Press of downed trees and a variety of instances of property damage from all over the county, though a majority of the damage reported came from the southern border.

“With every storm we get we can see trees go down,” Johnson said. “We also had isolated flooding at intersections in town. We only estimated a couple of inches of rain fall, but it fell very rapidly.”

A tornado warning was issued in the southeast corner of Steele County where the National Weather Service picked up a tornadic thunderstorm over Steele Center and Bixby on the radar. They warned people in the area to take immediate cover in a basement of an interior room on the lowest floor of a sturdy building. The warning also stated that flying debris will be dangerous and that severe damage could be done to mobile homes, roofs, windows, vehicles, and trees. Owatonna was not located within the warning area.

According to Johnson and confirmed by the National Weather Service, there were no tornado touchdowns in the area Tuesday night. There was, however, a funnel cloud confirmed in the Blooming Prairie area, though it never dropped down from the sky.

Though the major part of the storms moved through the area in under two hours, the Steele County SKYWARN volunteers didn’t work any less hard during that time. Between the spotters in the field and the point people operating out of the Emergency Management Center set up in the basement of the Owatonna Fire Station, Johnson said that the men and women volunteering that night operated as professionals with a superior level of diligence.

“These volunteers are using their own time and their own gas money to go out there when nobody else is,” Johnson said. “They do it because they care about the people in their community.”

When potentially dangerous weather is reported by the National Weather Service, the Steele County Emergency Management Team and SKYWARN volunteers immediately go into action. Johnson stated that spotters are sent out into the field in every area of the county to watch for high winds, tornadoes, and hail. Other volunteers remain in the Emergency Management Center and stay connected with the National Weather Service to report and receive updates as well as watch radars.

The tornado warning that was issued, while it didn’t result in a tornado touching down, was issued in a specific polygon shape that Johnson said the National Weather Service has been moving towards in recent years. He said that by using a specific polygon they are able to avoid confusion of a county-wide warning when only one section of the county is actually experiencing severe weather.

“We really recommend that everybody get a NOAA all-hazard weather radio so they can get the most accurate emergency alerts for severe weather,” Johnson said. “It is the fastest way to get alerts for these storms that pop up quickly. They are not expensive and you can program them to only receive warnings in Steele County.”

Johnson said that these weather radios can be brought to the Owatonna Fire Station to be programmed correctly. He also suggested that Steele County residents sign up for the Everbridge alert system, which is used to alert the area about emergencies and other important community news including road closures, missing persons, and evacuations. People can sign up for Everbirdge by going to SteeleCountyEmergency.com.

“With all the volunteers, weather radios, and radars, there is still always the possibility that we will have a rapid forming cell or a tornado that gets rain-wrapped and is hard to spot,” Johnson stated. “If it looks bad, take shelter.”