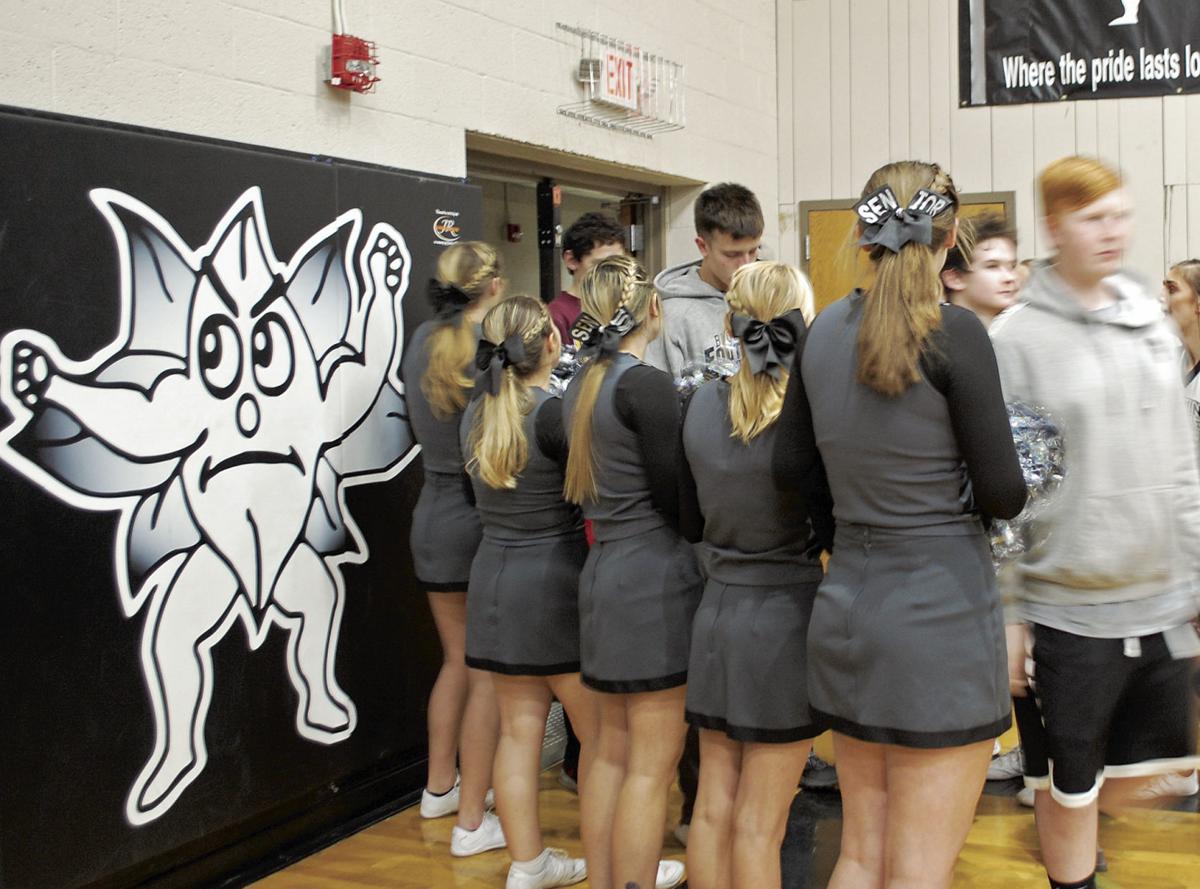 The Blooming Prairie Awesome Blossom watches over the school’s state championship football team at a victory celebration this fall. Although the district has been nicknamed the “Blossoms” since at least the early 20th century, the current iteration was drawn by a student in the late 1970s and is now a No. 1 seed in a statewide mascot competition to be determined by popular vote. (Bridget Kranz/People’s Press) 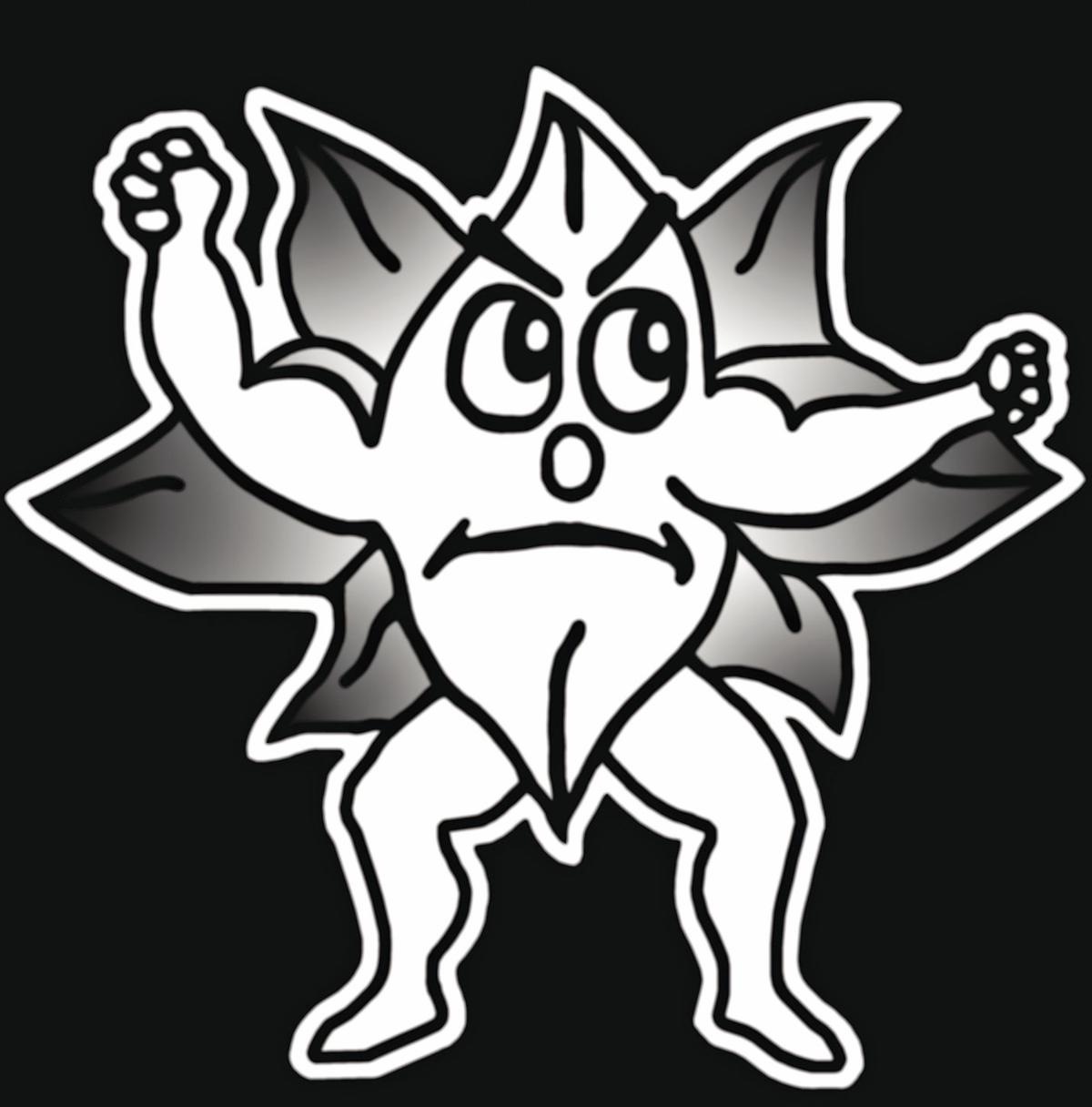 The Blooming Prairie Awesome Blossom watches over the school’s state championship football team at a victory celebration this fall. Although the district has been nicknamed the “Blossoms” since at least the early 20th century, the current iteration was drawn by a student in the late 1970s and is now a No. 1 seed in a statewide mascot competition to be determined by popular vote. (Bridget Kranz/People’s Press)

“There is only one thing worse than being named the Blossoms,” said H. Peterson, a former teacher and coach in Blooming Prairie. “And that’s getting beat by them.”

While the spring sports season may have been cancelled, the Blooming Prairie Public Schools’ Awesome Blossoms are still in the midst of a heated competition — having made it to the second round of a statewide mascot bracket orchestrated by the Minnesota State High School League. Determined by popular vote, Steele County’s favorite flower handily defeated the Ely Timberwolves in the first round earlier this week. Starting Monday, it will have to once again defend its top-ranked position against the Edgerton Flying Dutchmen.

Both teams are part of the 16-school Pretzel & Cheese Region — now down to eight schools after the first round. While Blooming Prairie cruised past the Timberwolves with 76% of the vote, the Flying Dutchmen are also coming in following a blowout over the Cleveland Clippers. However, Edgerton is the eighth seed overall in the region — making the No. 1 seed Blossoms a heavy favorite to win next week. Since the competition began on Monday, nearly 25,000 have cast their votes on Twitter, chiming in on the two regions that have had their matchups as of Wednesday.

While parsing through the roughly 400 schools who are members of the Minnesota State High School League and large enough to have a athletics program, media specialist John Millea said he first narrowed the field down to 64 especially unique mascots — spread out over four groups with 16 schools each. In creating the Pretzel & Cheese, Pork Chop, #ThankARef and #BeTheLightMN regions, Millea started by selecting a No. 1 seed for each grouping. He continued on until the No. 8 seed and then added in eight more unranked schools.

Although there were some difficult decisions to be made — including cutting the 65th-ranked Pumas of Cristo Rey Jesuit High School in Minneapolis — Millea said he always knew that Blooming Prairie would be a top competitor.

“The Awesome Blossoms, that’s an all-timer!” he laughed. “I don’t think anybody is surprised that the Awesome Blossoms and the Moorhead Spuds are the No. 1 seeds. Those are no-brainers, and I would not be shocked at all if those are the final two teams.”

With a few upsets and close calls — including a 0.8% loss by the Sauk Centre Mainstreeters to the Grand Forks Green Wave — he added that anything could happen. For the moment, though, the Spuds look to be Blooming Prairie’s stiffest competition. On Tuesday, Moorhead advanced in its #ThankARef Region with 77% of the vote over another local favorite, the Waseca Bluejays. Positioned on opposite sides of the bracket, a final round of Blossoms vs. Spuds is a distinct possibility in the coming weeks.

In Blooming Prairie’s first round of voting, over 1,300 people participated, and the Blossoms widespread fame has led to statewide interest in the small Steele County district. Alison Mach, associate principal with the Blooming Prairie Public Schools, was invited on Tuesday to talk to a radio station all the way in Fargo about the district’s mascot.

“I was shocked to hear from them,” she said. “It’s kind of fun how far this has spread, just over the course of a couple days.”

In order to get ready for the interview, Mach added that she went back through the history of the mascot, chronicled by former principal and writer LeMar Nelson. According to this research, Mach said the nickname dates back to the early 20th century.

“The information that LeMar had was that in the early 1900s, when Blooming Prairie used to compete with Austin, the Austin newspaper would write that they were playing, ‘the boys from Blossom town,’” she explained. “That kind of became the nickname for the school.”

She added that there were attempts over the years to change or adapt it, with the aim of making it slightly more ferocious. Ultimately, these efforts culminated in the logo that the district has to this day — drawn in the late 1970s by then-student Tom Ressler. Peterson, who also served for years as the mayor of Blooming Prairie, remembers having Ressler in his art class at the time. He added that it wasn’t a specific assignment or project, it was just an idea that the student wanted to pursue.

Peterson said that, shortly after, another Blooming Prairie resident sewed up a costume to match and the use of the new logo just kept growing. Getting to see it through the years, one of his fondest memories is when a Blooming Prairie football player was captain of a statewide all-star team. “It was really neat seeing that logo on the helmets of all of the players.”

Over the years, Mach agreed that the mascot has helped put the town on the map in some ways, amplified by high-performing teams like this year’s state football champions.

“I came from Pine City, and we had the dragon which was a lot more intense,” she laughed, of first becoming a Blossom nearly two decades ago. “I saw that we were flowers but from there, your mascot’s your mascot. I keep saying there’s a lot of pride with that, and I’m proud we have a mascot that people talk about.”

Giving people a chance to express this pride was one of Millea’s goals in starting the bracket competition this year, the first of its kind for the Minnesota State High School League. At a time when communities can’t come out in person to cheer on their athletes, he added that they can at least continue to support — and vote for — their beloved mascots. With the second round of the competition set to take place next week, Millea added that it will likely be another month or so before he gets to announce this year’s winner.

The Blooming Prairie Awesome Blossoms have made it past the first round in a 64-team, bracketed mascot tournament. Organized by John Millea, media specialist for the Minnesota State High School League, voting will open for the second round in Blooming's division next Monday.

To follow along with the results or to cast a vote for the Blossoms, visit Millea's personal Twitter page at www.twitter.com/MSHSLjohn and look for the corresponding poll early next week. Each region will have a 24-hour voting period per round.