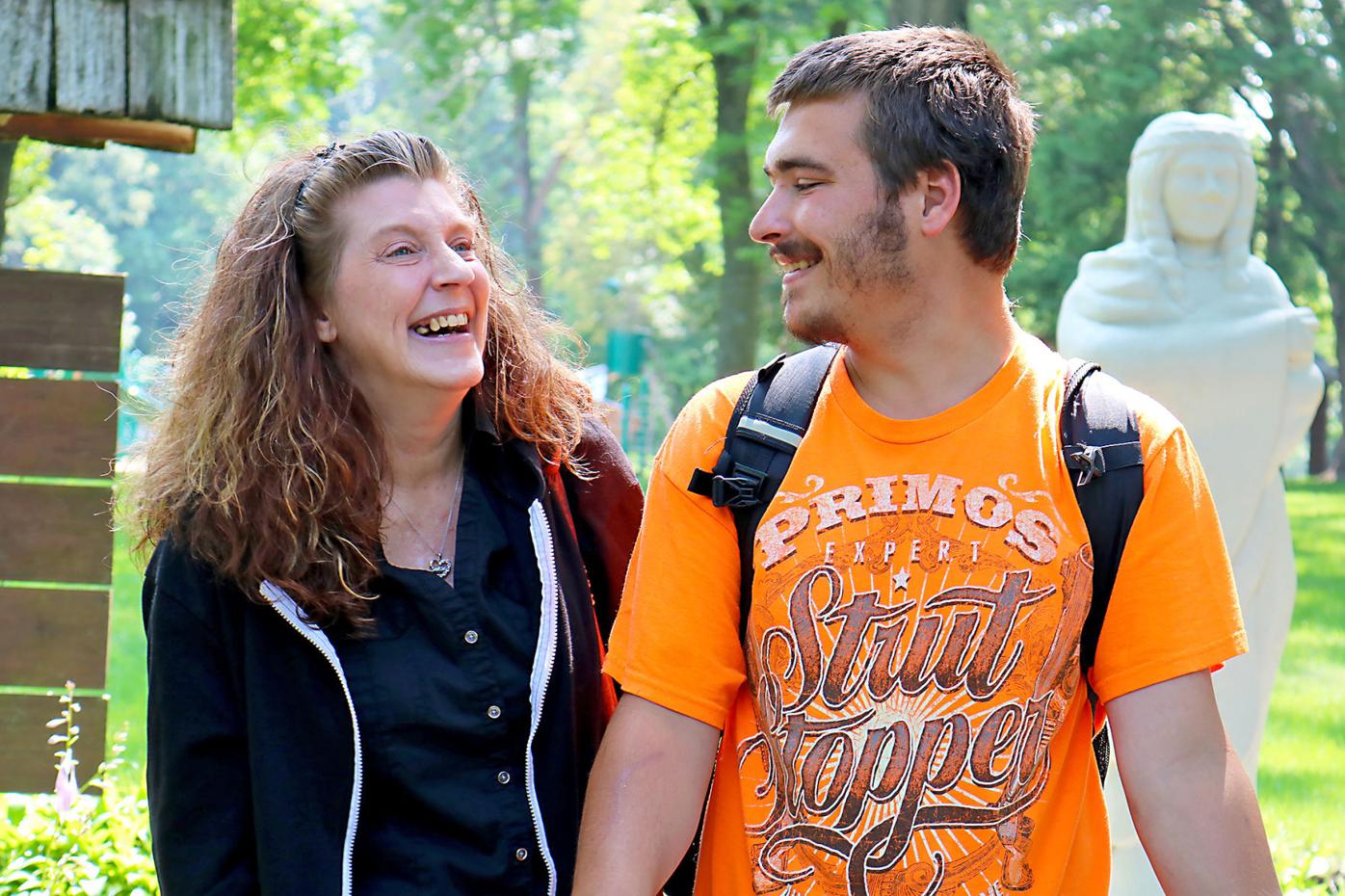 Sarah Proulx and her son, Mason Madvig, laugh as they talk about how much better life has become since moving to Owatonna. Mason, an adult with autism, has become a familiar face around town as he takes daily bike rides to several of his favorite city parks. (Annie Granlund/southernminn.com) 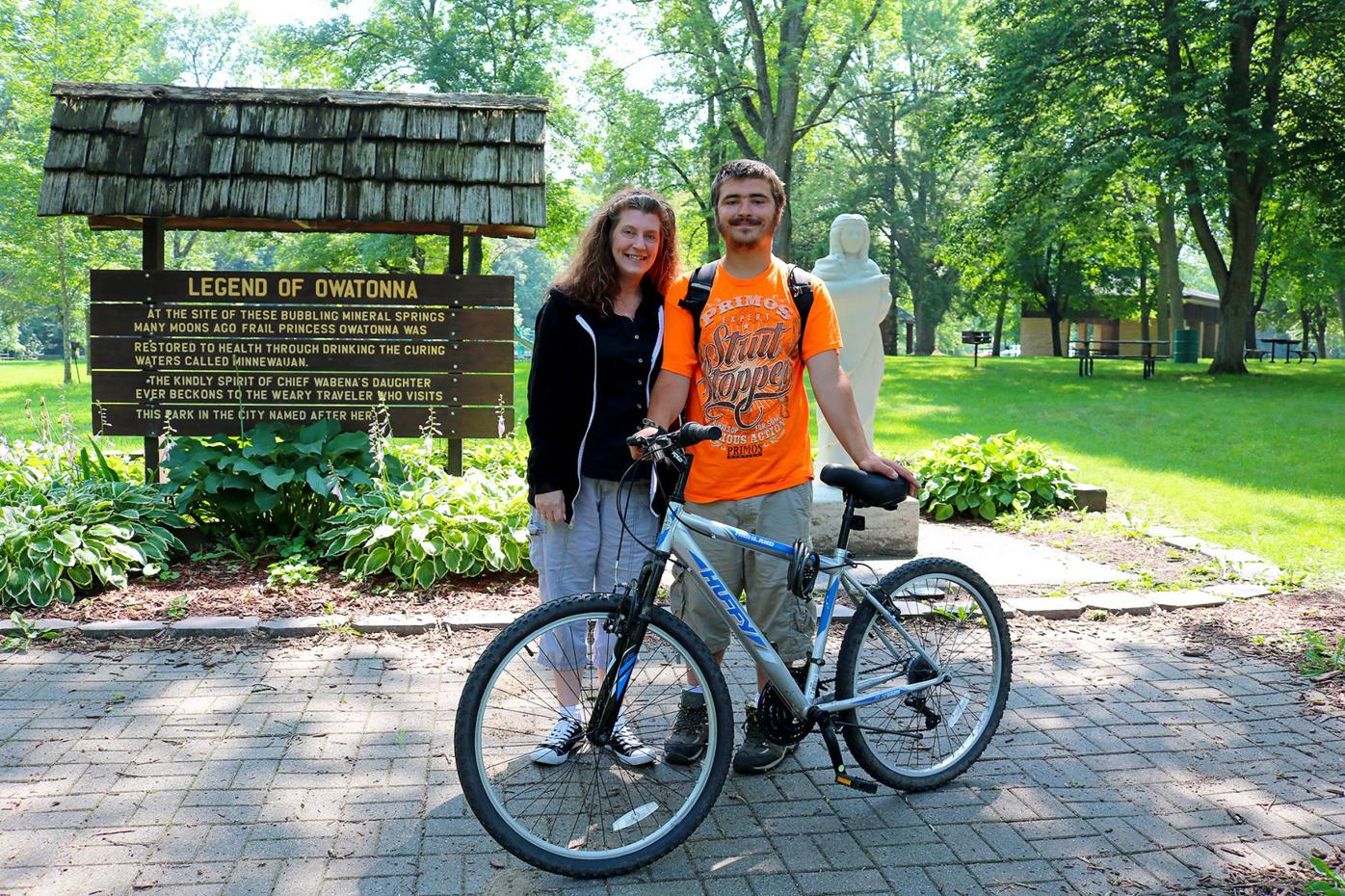 Mineral Springs Park is Mason Madvig’s favorite park to visit, often on a daily basis during his bike rides. Mason’s mom, Sarah Proulx, is on a mission to help inform others about adults with autism, just like her son. (Annie Granlund/southernminn.com)

Sarah Proulx and her son, Mason Madvig, laugh as they talk about how much better life has become since moving to Owatonna. Mason, an adult with autism, has become a familiar face around town as he takes daily bike rides to several of his favorite city parks. (Annie Granlund/southernminn.com)

Mineral Springs Park is Mason Madvig’s favorite park to visit, often on a daily basis during his bike rides. Mason’s mom, Sarah Proulx, is on a mission to help inform others about adults with autism, just like her son. (Annie Granlund/southernminn.com)

For many mothers in the world, nothing is more important than their child’s happiness.

That is why when Sarah Proulx found her son at home crying, her heart began to break — as it has many times in the past.

“All you ever want for your children is for them to be happy,” said Proulx, who relocated to Owatonna in the fall.

Though this particular incident with her son is not unique for Proulx, it may be less common for other families. Proulx’s son, Mason Madvig, 21, is sensitive, and curious. His best friend is his orange tabby, Mufasa. Someday, Mason hopes to be a captain of a ship, perhaps one as large as the Titanic.

“Mason is considered high-functioning and IQ-wise his mind is like that of an 8 year old, though that is mainly in social and emotional aspects,” Proulx said. “When you have a child with special needs, they often are not accepted and life can be harder for them because they don’t have someone to advocate for them. But all everyone really wants to feel accepted, including Mason. He is unique — which I think is a better way to describe him than ‘different.’”

According to the website, Autism Speaks, autism/autism spectrum disorder “refers to a broad range of conditions characterized by challenges with social skills, repetitive behaviors, speech and nonverbal communication.” Autism is a spectrum disorder, meaning each person has unique strengths and challenges.

The Centers for Disease Control estimates 1 in 54 children in the United States today are autistic.

Mason’s diagnosis was one of the reasons Proulx moved to Owatonna, where her father and other family members reside. Prior to her move she had been living in the Twin Cities, where she said life for Mason was just “really hard.” Finally able to move Mason to the smaller community roughly two months ago, Proulx said things were starting to turn around.

“He is a different person since we moved down here,” Proulx said. Because Mason loves to be outdoors, Owatonna seemed to be the perfect match with the expansive parks and trails system throughout the community. Mason quickly picked favorites spots to visit, mainly Mineral Springs Park, River Springs Water Park and Kaplan’s Woods.

The day he came home crying, however, Proulx was worried that history could be repeating itself.

“He had told a girl she was pretty, and in situations like that he is often misunderstood because he is an adult,” Proulx said. “The girls called him creepy and said they were going to call the police, so he came home crying saying it was in his favorite park and that he was afraid that he could never go back again.”

Proulx said she went down to the park and explained to the girls that Mason is autistic and that they were very kind and understanding. About a week later, however, Mason was at the water park and on FaceTime with his father when an officer patrolling the area stopped and asked him for his ID.

“He thought he was in trouble,” Proulx said, noting that Mason does not carry an ID, but instead a card that explains he has autism and Proulx’s name as his legal guardian. “First they spoke with the water park, and luckily Mason has gotten to know the manager there and they visit a lot so he was able to explain to the officer who Mason is.”

Proulx said the officer — Officer Brian Shaw — eventually called her and said he enjoyed talking to Mason and that she had a great son. Still, Proulx felt there was something more she needed to do to help improve Mason’s life in Owatonna as well as help help their new community understand him.

On July 12, Proulx took to the local Owatonna community Facebook pages and wrote a heartfelt introduction on Mason’s behalf. She explained that Mason loves Owatonna, loves to ride his bicycle around town and that more than anything loves people.

“He is very kind and friendly … he loves to say hi and compliment people,” Proulx wrote.

Within one day, Proulx’s post was shared hundreds of times and gained more than 1,000 positive reactions. Proulx said many people reached out to her over Facebook, welcoming her and Mason to town and letting her know that they also have a child with autism. Proulx said many people sent her links and information on different programs available in the area for Mason, some of which she has already started connecting with to get Mason enrolled in various programs, such as in-home therapy.

Most importantly, however, Mason had a wonderful bike ride the following day.

“Everyone said hi to me,” Mason said, grinning ear to ear. “People I had never met before said, ‘Hi Mason!’”

Though there were some negative reactions and comments to Proulx’s post, some of them accusing Mason of making people uncomfortable and not understanding why his mother allows him to bike rides unsupervised around town, Proulx said she took them as additional learning opportunities.

“We’ve had a lot of good conversations about using his phone around people and how people may misinterpret it,” Proulx said, acknowledging that it could look like Mason is taking photos or videos when he is actually on FaceTime with his family. “We’ve talked about being more aware of our surroundings and to maybe find a table to sit at if you’re going to talk on the phone.”

Instead of taking offense or being hurt by the negative comments, Proulx said she only feels more empowered to try to help teach others about autism and what it is like for an adult who has been diagnosed with it.

“It’s hard and I get that — it’s a lot easier to understand someone when you can physically see their special needs,” Proulx said. “You cannot physically see autism and even when you’re talking to someone who is autistic it’s not always obvious.”

Proulx said she has also realized that people seem to be more understanding when it comes to children with autism, but for whatever reason that understanding doesn’t seem to always extend to adults.

“They just seem less understanding and accepting of behavior that they have decided is odd or strange,” Proulx said. “I think if they just could understand that people with autism sometimes are unable to understand social cues or how to socialize it would be easier. Often it’s as simple as just being very specific with your words.”

Overall, Proulx said Mason has never been happier than he has been the last week. More and more people continue to say hello to him, engage him in conversation, or simply smile and wave.

Mason agrees that life has simply been better since he’s been here.

“I love Owatonna,” Mason said. “The people here are the best.”

Autism spectrum disorder is a developmental disorder characterized by differences in social interaction and communication as well as the presence of restricted and repetitive patterns of behavior, interest or activities.

To learn more about autism, visit the Minnesota Autism Resource Portal at mn.gov/autism.