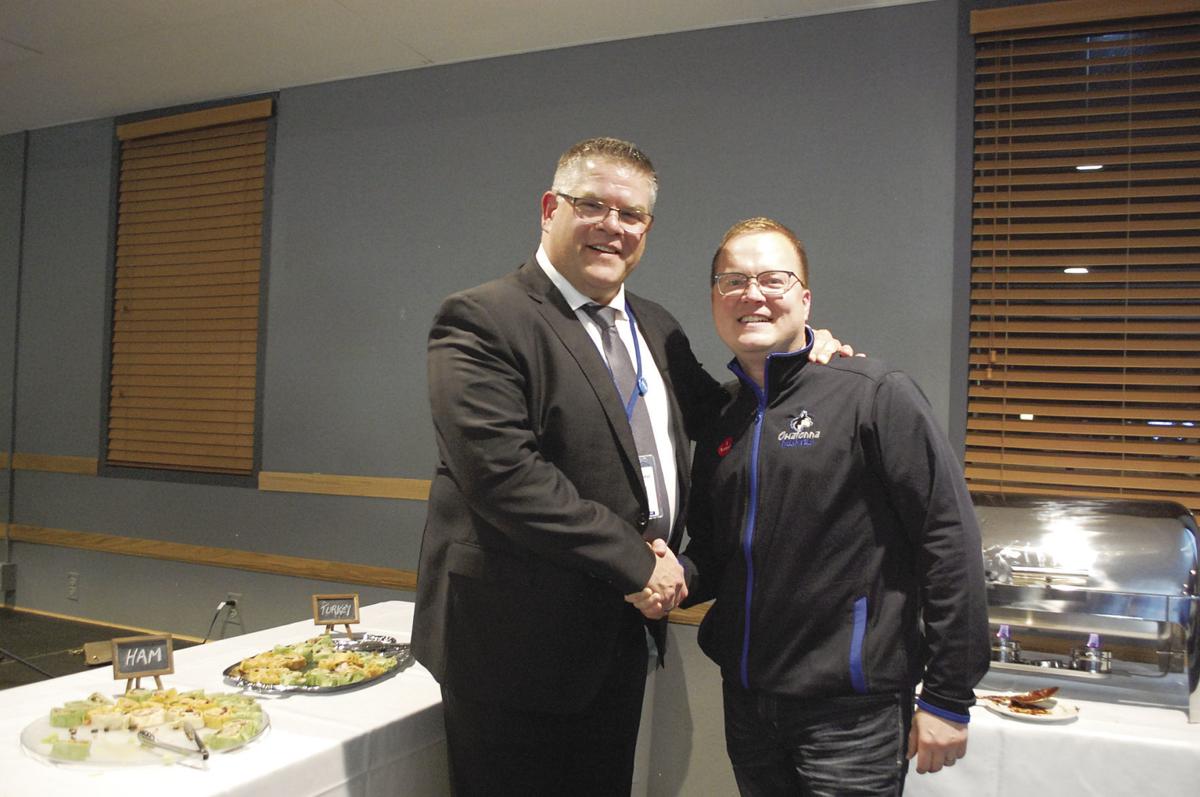 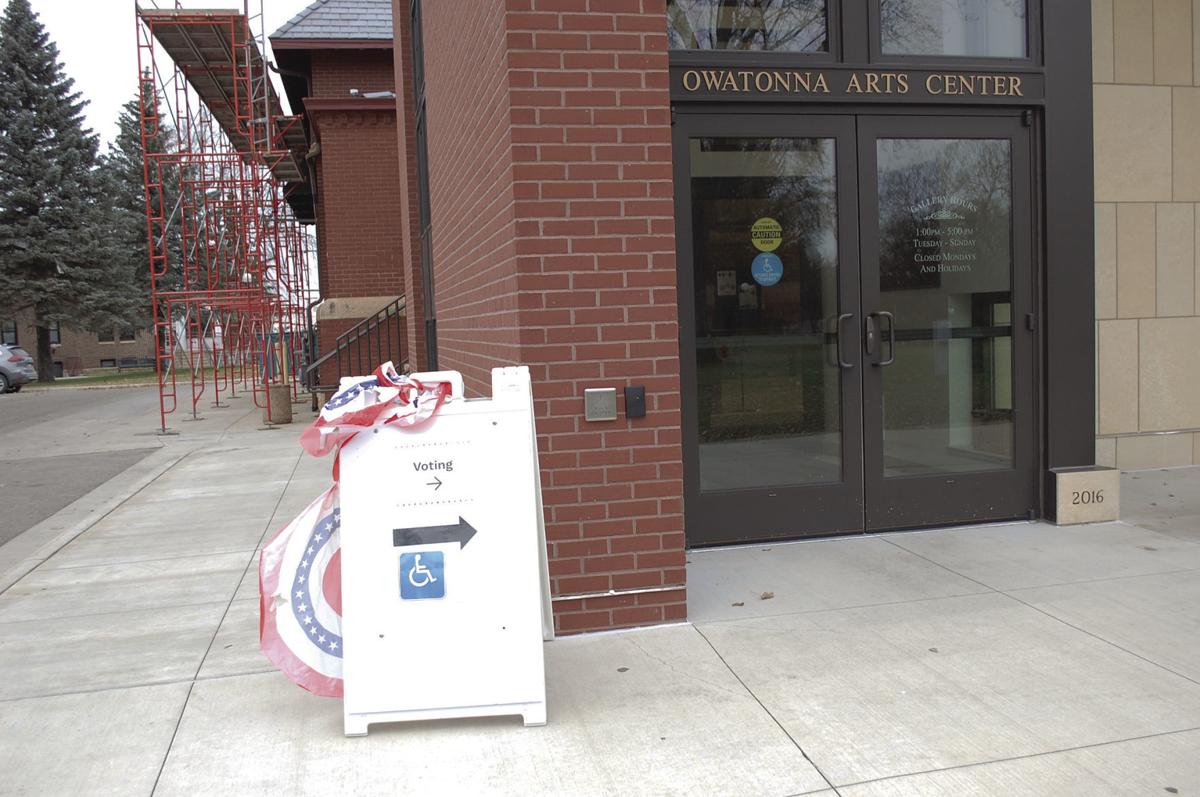 A sign outside the Owatonna Arts Center beckons Ward 3, Precinct 1 voters in to cast their ballots in the Nov. 5 school building bond referendum, which will determine the fate of the proposed new Owatonna High School. Voters in that precinct rejected Question 1 of the vote by a tally of 224 yes to 240 no. They also rejected Question 2 by a margin of 219 yes to 238 no. However, both measures passed by a final tally of 6,311 yes to 5,017 no for Question 1 and 5,756 yes to 5,420 no for Question 2. (Bridget Kranz/People’s Press)

A sign outside the Owatonna Arts Center beckons Ward 3, Precinct 1 voters in to cast their ballots in the Nov. 5 school building bond referendum, which will determine the fate of the proposed new Owatonna High School. Voters in that precinct rejected Question 1 of the vote by a tally of 224 yes to 240 no. They also rejected Question 2 by a margin of 219 yes to 238 no. However, both measures passed by a final tally of 6,311 yes to 5,017 no for Question 1 and 5,756 yes to 5,420 no for Question 2. (Bridget Kranz/People’s Press)

OWATONNA — After nearly a year of anticipation — including a failed referendum in May — the Owatonna Public Schools building bond was approved by voters Nov. 5.

In addition to allowing the school district $104 million in bonding authority for construction of a new high school, residents also approved a second, smaller bond for renovation of the current facility into a district center.

The new facility — a 300,000-square-foot building on the south end of town — will be able to house 1,600 students with a larger plot of land to potentially grow into in the future. Superintendent Jeff Elstad said prior to the vote that he hopes expanded and updated facilities can improve the district’s workforce development programs and provide more practical training experiences for students.

The new complex, slated to go in on 88 acres near the intersection of highways 14 and 218, will also house the school’s athletic facilities and practice fields.

The results are unofficial until the school board meets to confirm the results. That meeting is slated for Nov. 12.

Turnout for the two referendums remained almost identical, both at each precinct and across the district. In total, 73 fewer residents turned out to vote this time around.

The precinct most overwhelmingly in favor of the new school was Ward 2, Precinct 2, which serves the northeastern part of the city around Brooktree Golf Course. Similar to last time around, the two precincts closest to the site of the proposed high school — which was only selected this fall — also came out in favor of the proposal.

Meanwhile, voters at the Clinton Falls Township polling station remained heavily against the bond, although a slightly higher percentage of respondents voted in favor. Only 26% of those who cast their ballots at the rural precinct in May voted for the proposal. Tuesday, 32% of respondents at the station — which is set up for all school district residents living outside the City of Owatonna — came out in support.

Because agricultural landowners are taxed on the entirety of their property, farmers stood to potentially face a larger financial burden if the bond was approved. However, a new measure passed in the state Legislature shortly after the May referendum, will increase farmers’ school building bond tax credit from 40% to 70% by 2023.

In 2021, when residents will begin to pay taxes on the bond, farmers will be getting 55% of their contribution subsidized by the state.

For owners of a median-value, $175,000 home in the district, the passage of both bonds will mean a $17.59 per month tax increase for the 25-year duration of the bond. If the second measure had not passed, this figure would have been $16.17 per month.

The voting results for Question 1 favored its passage all evening, while the defeat of Question 2 seemed imminent until the last votes were counted.

As the tallies came in from Ward 5, Precinct 2 — the first precinct to report — the “yes” votes for Question 1 jumped out to an early lead with 527 casting affirmative ballots to 373 no votes. That trend would continue through the first five precincts that had their votes counted with only one precinct — Ward 3, Precinct 1 — voting against the question with a tally of 224 yes to 240 no. The total at that point in the count had the yes votes leading by more than 600 votes — 2,500 yes, or 57%, to 1,873 no, or 43%.

That would change considerably when the votes came in from the rural precinct — those who live in the Owatonna school district boundaries but outside the city limits. In the rural precinct just 545 voted yes while 1,154 voted no — a 2-to-1 margin. Those results tightened the race, giving the yes votes the slimmest of margins, 3,045 (50.1%) yes to 3,027 (49.9%) no — a virtual tie.

That, however, would be the closest Question 1 came to be defeated. By the time the final two precincts’ votes were tallied, the yes votes led by nearly 100 votes — a lead that would be stretched greatly by the final counts. Ward 1, Precinct 2 widened the divide when it posted 846 affirmative votes to 451 negative ballots on Question 1.

The fate of Question 2, however, seemed doomed for most of the evening as the initial ballots — those of Ward 5, Precinct 2 — had the question behind with 424 yes votes to 459 no. That trend would continue with the yes votes gaining ground with one precinct only to see it falling behind with the next precinct’s tallies. With just one precinct left to report, the question appeared ready to go down in defeat with a total at that time of 4,749 yes votes (49%) to 4,901 no votes (51%).

But the votes from Ward 2, Precinct 2 proved decisive with voters casting 1,007 yes votes to 519 no votes — enough to put the yes votes over the top.

Prior to the vote, Elstad had said residents could count on a roughly one-year design process. He had noted that the district plans to publicly recruit students, staff and members of the community for a design committee that will work with architects and engineers on a finalized concept. The district would then plan to start doing the bulk of construction in Spring 2021, following necessary approvals from the City of Owatonna. The new Owatonna High School will likely be complete in 2023.