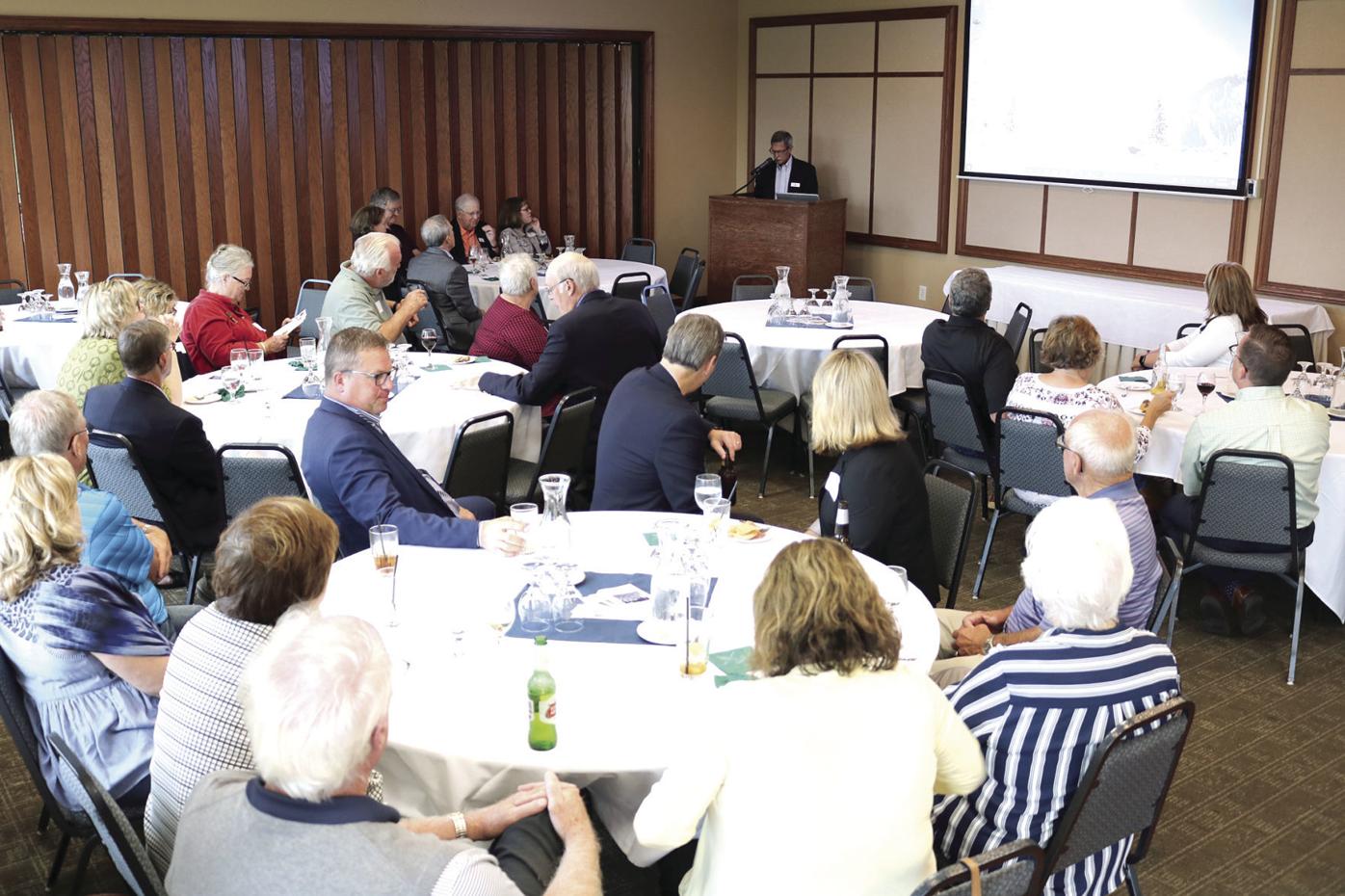 Bruce Paulson, chair of the 761 Foundation, addressed an intimate crowd at the Owatonna Country Club on Thursday evening in celebration of 25 years of giving to the Owatonna School District. (Annie Granlund/People’s Press) 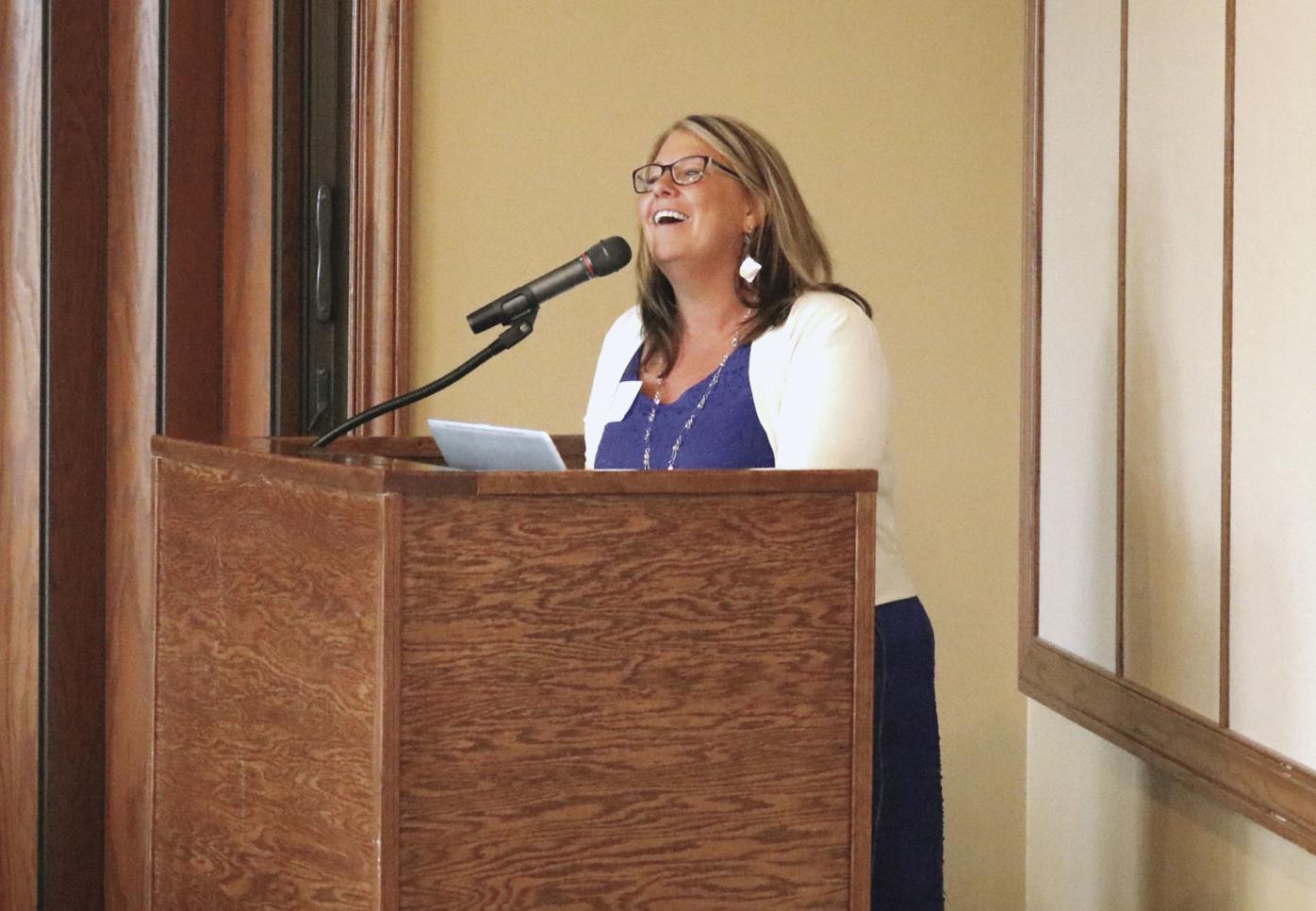 Michelle Krell, the director of teaching and learning for the Owatonna School District, explains the various ways that the more than $1 million from the 761 Foundation has gone to help schools and students in the last 25 years. (Annie Granlund/People’s Press)

Bruce Paulson, chair of the 761 Foundation, addressed an intimate crowd at the Owatonna Country Club on Thursday evening in celebration of 25 years of giving to the Owatonna School District. (Annie Granlund/People’s Press)

Michelle Krell, the director of teaching and learning for the Owatonna School District, explains the various ways that the more than $1 million from the 761 Foundation has gone to help schools and students in the last 25 years. (Annie Granlund/People’s Press)

OWATONNA — They’ve done a lot in a short time.

In the early 1990s, the State of Minnesota was changing the way it allocated funds to schools. At the same time, the Owatonna School District had roughly $50,000 in various donations to support activities within the schools, but they were unsure of how to best make sure that money is spent fairly and appropriately.

In 1992, a group of concerned citizens who strongly believed in supporting the local students came together to form an independent foundations to serve the kids attending Owatonna Public Schools. Within a year, the 761 Foundation was incorporated as a 501©(3).

“That same year, Robert Chladek prepared his will, leaving a substantial portion of his estate to the 761 Foundation,” said Bruce Paulson, the current chair of the Foundation. “His gift was the 761 Foundation’s first major donation and provided the catalyst for us to become a major funder for students in this community.”

According to Paulson, the Chladek Estate funds allowed the foundation to award its first grants in 1994, totaling $16,000 to the OHS Ag Education department. Today, the foundation’s assets have grown to about $3.7 million.

“The important part of our existence is giving out money and our first grant was awarded 25 years ago,” Paulson said as he addressed a crowd in support of the foundation at the Owatonna Country Club Thursday night. “Hence the reason for this 25th anniversary celebration this year.”

The 761 Foundation has accomplished a lot in its lifespan, including awarded $2 million in mini-grants as well as $1.5 million in scholarships to Owatonna graduates.

Just this previous spring, the foundation awarded more than $100,000 in mini-grants that range from $500 to $600. These grants have been used to fund field trips, literacy programs, labs, books, microscopes, band instruments, lyceums, workshops, and about 30 other programs that are not only important for students but would likely not be funded in other ways. According to Paulson, the foundation receives up to $200,000 in requests for these grants each year, though normally they can only award about half that amount.

At the celebration on Thursday, Paulson announced that the foundation has decided to start recognizing five levels of donors. Those who donate an annual contribution of less than $100 will be considered a Friend of the 761 Foundation.

“It only takes a donation of $100 to $499 annually to become a Sustaining Member,” Paulson explained. “Patrons of the Foundation will be recognized for annual donations ranging from $500 to $999.”

Those who donate more than $1,000 annually will be recognized at the Leadership level, while the Foundation’s highest level of donors will be the Legacy Circle, reserved for those who have established an estate provision, trust, annuity, or deferred gift.

“You donations will all go a long way toward helping the 761 Foundation better serve students attending Owatonna Public Schools,” Paulson said. “We hope that this event will become an annual celebration of all our accomplishments.”

Continuing with the celebration, the 761 Foundation will be handing out “celebration cookies” to those attending the New Prague vs. Owatonna football game on Friday from 7 p.m. to 8 p.m. on the southwest corner of the OHS football field. The cookies have been donated by HyVee.

More information on the 761 Foundation can be found on their website at 761Foundation.com.