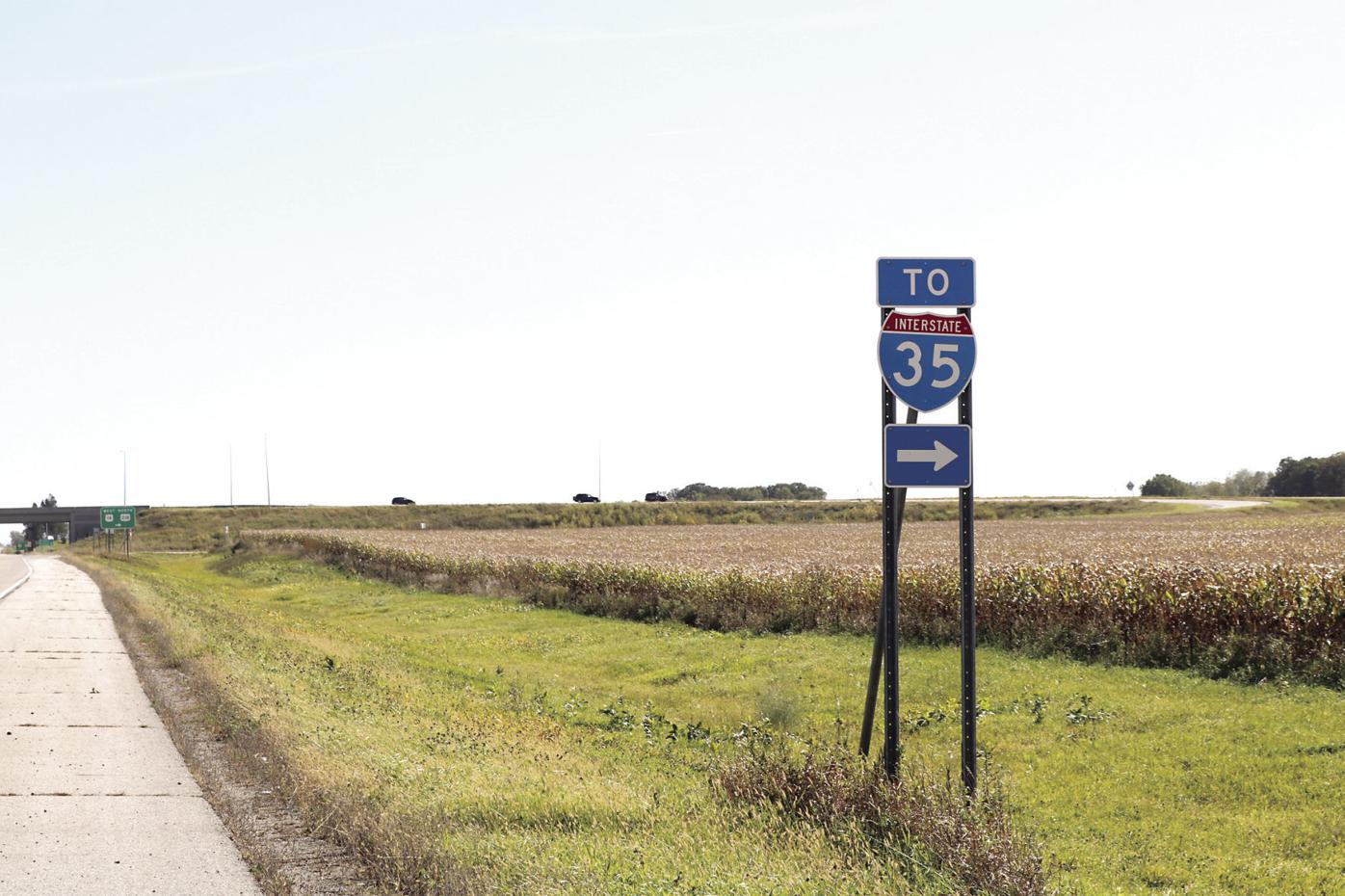 The eastern edge of a parcel of land designated as the site for the new high school proposed for the Owatonna school district. Bixby Road (Highway 218/Highway 48) borders the property to the east while Highway 14, seen in the distance, borders the property on the south. (Annie Granlund/People’s Press) 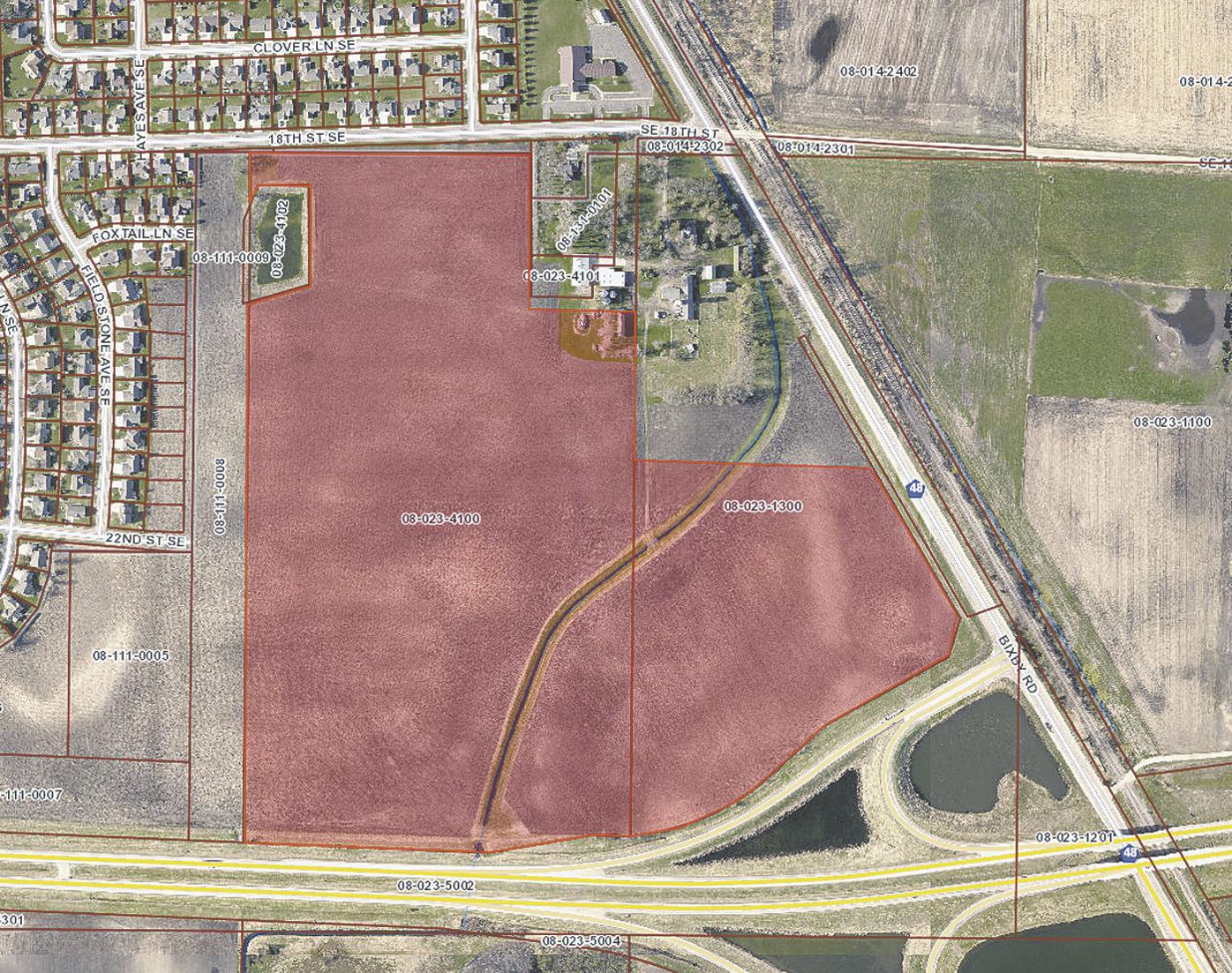 A new Owatonna High School would be built on about 88 acres of land shown in this map in red. The proposed site is bordered by 18th Street SE to the north, Highway 14 to the south and Bixby Road (Highway 48/Highway 218) to the east. Federated Insurance has pledged to purchase the land and donate it to the Owatonna school district for the new high school if the bond referendum passes in November. (Courtesy of Owatonna school district)

The eastern edge of a parcel of land designated as the site for the new high school proposed for the Owatonna school district. Bixby Road (Highway 218/Highway 48) borders the property to the east while Highway 14, seen in the distance, borders the property on the south. (Annie Granlund/People’s Press)

A new Owatonna High School would be built on about 88 acres of land shown in this map in red. The proposed site is bordered by 18th Street SE to the north, Highway 14 to the south and Bixby Road (Highway 48/Highway 218) to the east. Federated Insurance has pledged to purchase the land and donate it to the Owatonna school district for the new high school if the bond referendum passes in November. (Courtesy of Owatonna school district)

OWATONNA — A new high school in Owatonna will be located in the southeast corner of the city under a proposal released by the school district on Tuesday.

The school district said that it has identified a parcel of land, approximately 88 acres, that would be “suitable for a new high school” and that the land will be donated to the district by Federated Insurance.

The purchase and donation of the land is contingent on the passage of a $104 million bond referendum in November.

The land, currently a cornfield, is located at 1945 SE 18th St., north of intersection of Highway 14 and Highway 218 and diagonally across 18th Street from Cornerstone Evangelical Free Church. The choice of the site followed what the district called “an extensive review of land options done in partnership with city and county officials.”

School superintendent Jeff Elstad said Tuesday that the district had narrowed the choice to three possible locations — two on the north side of town and the third that was eventually chosen. The school district worked with engineers from both the city and the county, as well as private engineers from the Minneapolis-based BKBM Engineers, to evaluate the three sites, Elstad said.

The properties were evaluated on the basis of several different factors, including water mitigation, proximity to utilities and other infrastructure, accessibility and traffic flow, Elstad said, and it was determined that the 18th Street location was the best.

“A lot of homework was done,” said Elstad.

In a statement released by the school district, Troy Klecker, the community development director for the City of Owatonna, agreed with the location choice of the proposed campus.

“This is a good site for a high school in terms of soil conditions, existing infrastructure and the long-term development plan for the city,” he said.

November’s vote will be the second time this year that the school district has brought a bond referendum to build a new high school to voters. In May, a $116 million referendum was narrowly defeated 5,762 against to 5,642 for — or 50.53% to 49.47%. The district then spent the summer gathering community input to identify the reasons for the narrow loss.

Voters told the school district that they were looking for a scaled-back plan and a lower cost. For example, under the May plan, the new high school would have had roughly 342,000 square feet of space and would have been able to serve a capacity of 1,700 students. In the plan approved by the district late in the summer, the district reduced the size of the building by reducing the number of students the school could serve to 1,600.

Another concern expressed in the feedback was the question of where the new high school would be built, which prompted Tuesday’s release of the proposed site.

“We worked hard to listen to our community, and identifying this land is one of our many responses,” said Elstad.

As the district was in the process of gathering community feedback on the project, district officials were approached by Federated about the land. Federated had already pledged $20 million toward a new high school and in the summer, the Owatonna-based insurance provider offered to purchase the land for the project if and when voters approved of the project.

According to a statement by Federated, the school district had identified that the cost of the new high school and the tax impact was too high for some voters. In order to lessen the cost and impact on taxpayers, Federated chose to purchase the land and donate it to the school district.

“Federated believes that a strong educational system with supportive facilities is at the heart of what drives a successful community,” said Jeff Fetters, chairman and CEO of Federated in a statement released Tuesday. “The quality of life in Owatonna is more important than ever, not just for Federated Insurance, but for the future of this community. As such, we’ve chosen to purchase and donate the land to the school district. If we can pass this referendum together, we believe the payoff for our citizens and the business community will be significant.”

In the proposal brought before the voters in May, the district had set aside $2 million for the potential purchase of land for a new high school, Elstad said. When Federated approached the district in the early summer with the offer of purchasing the land for the project, in addition to donating the $20 million, that reduced the cost that voters would be asked to support by an additional $2 million, he said.

“We are incredibly grateful to Federated for offering to donate the land to us, if the November vote is successful,” said Elstad. “Their gift reduces the tax impact for our residents, which was another concern we heard.”

Federated declined to say how much it would be paying for the parcel of land, saying that it had entered into a binding letter of intent with the sellers.

“Under the letter of intent, the specific terms of the purchase are confidential until the final purchase is consummated and the land is donated,” Federated said in a statement. “If the bond referendum does not pass, there will be no sale and the terms will remain confidential so that a future sale of the land is not impacted.”

The referendum voted on in May carried an original price tag of $138 million, which was reduced to $116 million, thanks to $22 million pledged to the project by local businesses, including a promise of $20 million in cash from Federated Insurance.

The referendum to be voted on in November asks voters to approve a $104 million bond to construct a new high school. The reduction is in part because of the $20 million pledge from Federated, as well as the pledge to purchase and donate the land. Additional memoranda of understanding for donation for a new high school were signed in mid-August by Wenger Corporation and Viracon. Wenger pledged to donate “an amount no less than $2 million in equipment and materials to the district in support of the project” and Viracon pledged to “provide architectural glass at cost, a savings from market price estimated to exceed $500,000.”

Also pledging to support the project have been Gopher Sport and Mayo Clinic Health System.

Elstad said that the donations pledged by Federated and other businesses show that these businesses “see value” in what the school district does.