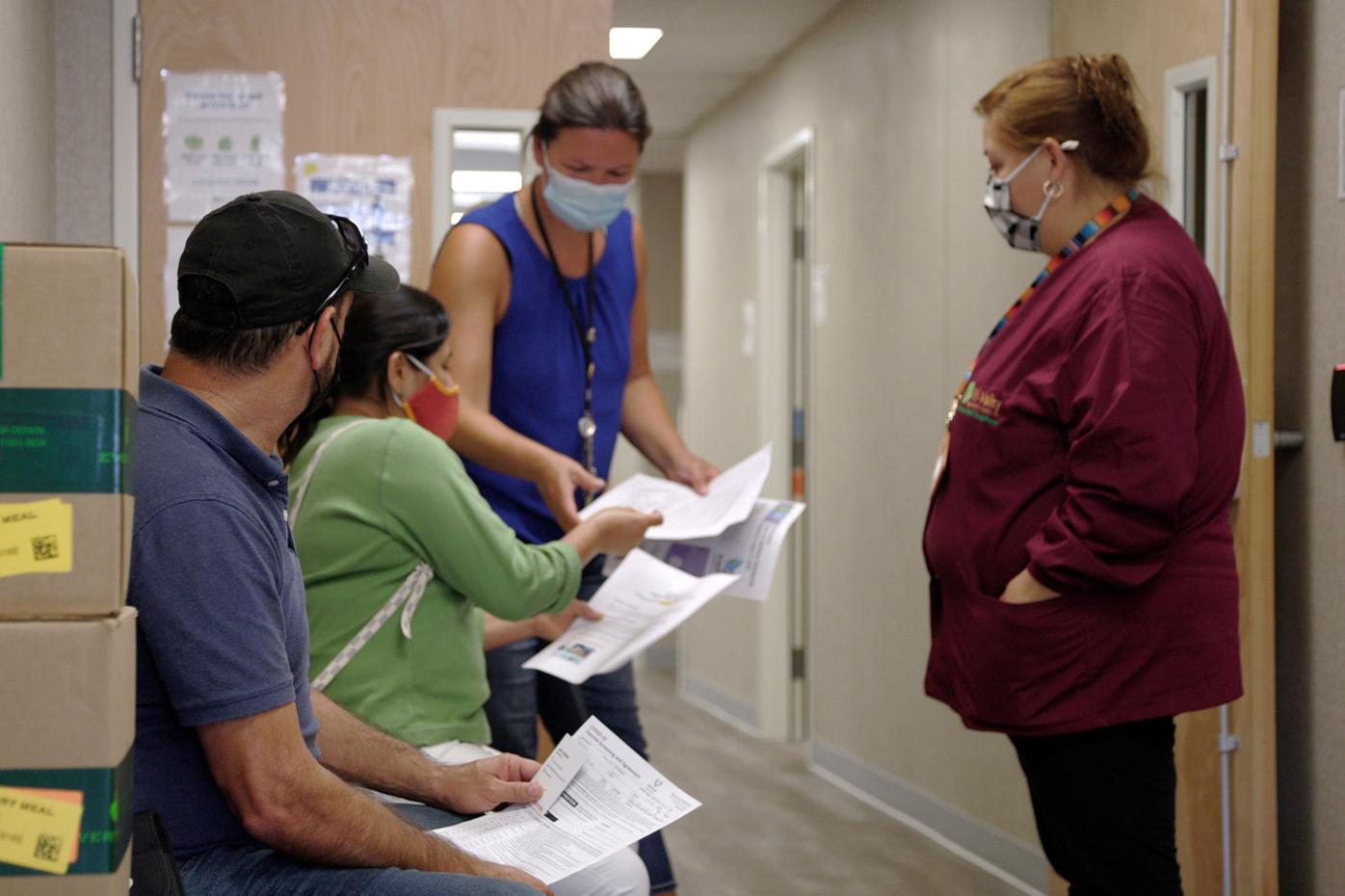 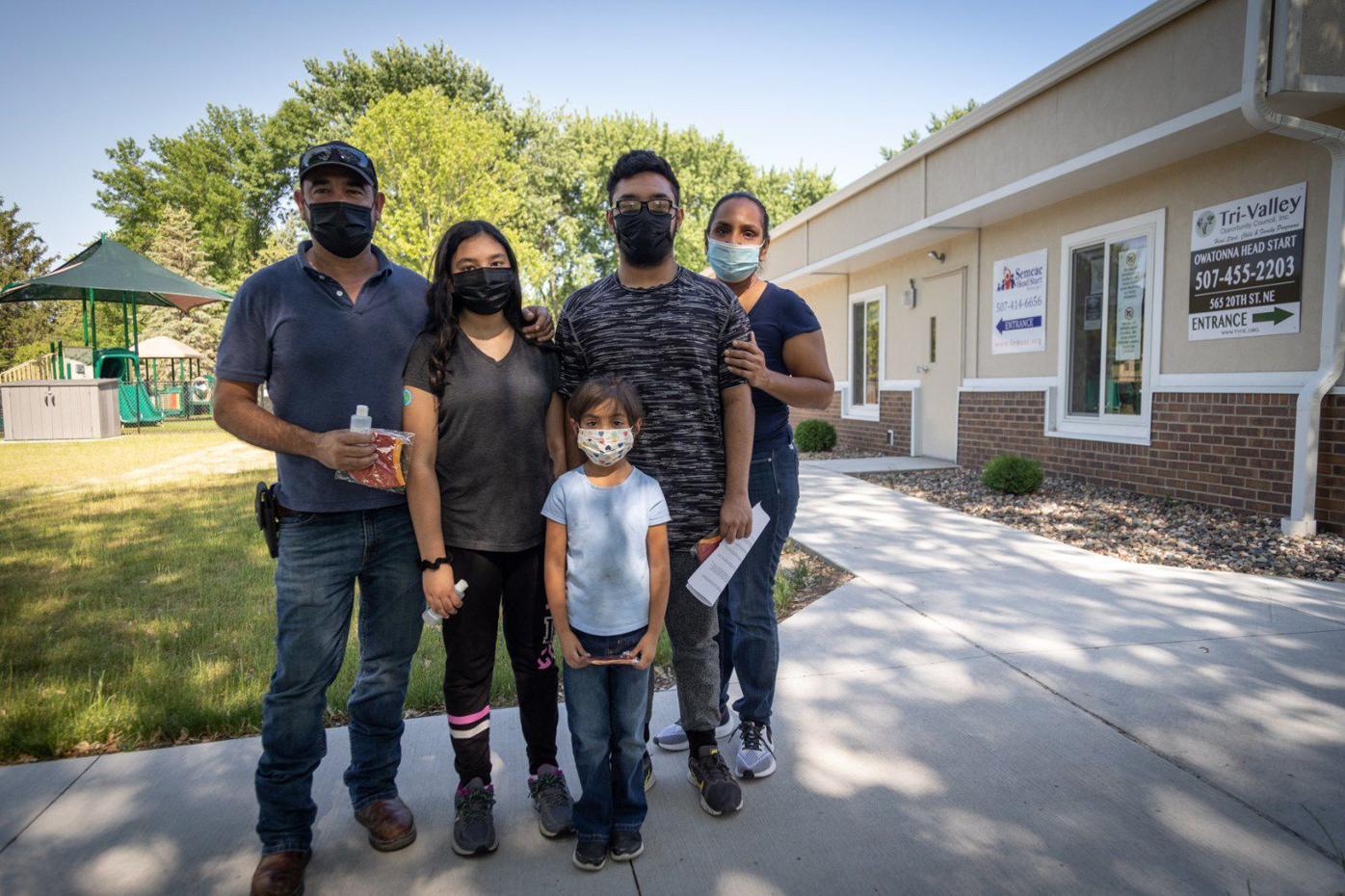 Luis Valdez, far left, and his family pose for a photo at a vaccination event in Owatonna, Wednesday, June 16. (Photo courtesy of Ben Hovland/Sahan Journal)

Luis Valdez, far left, and his family pose for a photo at a vaccination event in Owatonna, Wednesday, June 16. (Photo courtesy of Ben Hovland/Sahan Journal)

This story comes to you from Sahan Journal, a nonprofit news organization that covers Minnesota’s immigrants and communities of color.

Luis Valdez, Alex Briones, and Alondra Rodriguez all have something in common. They had the opportunity to get vaccinated against COVID-19 earlier this year, but decided against it until recently.

It’s not that they were adamantly opposed to being vaccinated. All three understand the seriousness of the virus. Rodriguez knows from personal experience, as she contracted COVID-19 last summer and was sick for 18 days.

Part of a reluctant cohort in Minnesota, Valdez, Briones, and Rodriguez adopted a wait and see attitude after the vaccine became available. They had unanswered questions. Rodriguez, who is 21, was concerned that the vaccine would give her side effects, like it did her aunt.

“I just don’t think I was ready for them,” she said. “I get sick pretty easily, so I was just sticking to the mask.”

Her husband, Briones, who is 24, was also hesitant. “I heard some things about the vaccines, side effects and all of that, and I was kind of sketched out,” he said. “But then I read up on it a little bit more before I got it.”

Now, Valdez, Briones, and Rodriguez have something else in common. They all got vaccinated Wednesday at a clinic run by the Tri-Valley Opportunity Council in Owatonna.

The event was held at the Semcac Head Start building north of downtown and was the result of a partnership between the University of Minnesota Mobile Health Initiative, Steele County Public Health and the Minnesota Department of Health. Tri-Valley assists roughly 60 families in its Owatonna location, more than half of them seasonal migrant workers, said Barbara Garcia, a recruiter and family advocate for the organization.

Rodriguez’s cousin works in the Semcac building, which is how she and her husband learned about Wednesday’s event. Minnesota health advocates are banking on these kinds of personal relationships, along with clinics held in small venues, to drive the vaccination effort forward.

New daily infections in the state and across the country are at some of the lowest levels since the pandemic began. More than half of Minnesota’s populace—in excess of three million people—has received at least one dose of vaccine.

That adds up to roughly 65 percent of the entire vaccine-eligible population. But, there is a slice of the populace that’s proven harder to reach, including some people of color.

Whereas earlier in the vaccine rollout, the state pushed mass vaccination events at bigger venues like convention centers and pro sports training facilities, more recent events have been smaller and more targeted. Planners of Wednesday afternoon’s clinic in Owatonna, for example, expected only around 30 people to receive doses. The event was aimed at Latinos, particularly migrant workers coming to Minnesota for the season to do agricultural labor.

Small-scale events will likely continue to be the norm throughout the summer. Tri-Valley held a similar clinic Thursday afternoon aimed at Latino migrant workers in Elgin, a small farming community of roughly 1,000 people in southeastern Minnesota. Two weeks from now, Tri-Valley will again hold back-to-back vaccine events in Owatonna and Elgin.

Shelly Goddard, a health service specialist at Tri-Valley, said her organization is uniquely positioned to get unvaccinated migrant worker families vaccinated because it’s already helping them get situated in Minnesota. Tri-Valley, which is based in Crookston, provides services aimed at improving quality of life, including migrant education, transportation, and senior programs.

“We meet each family as they arrive, and we do a registration process,” Goddard said. “That’s when we have an opportunity to talk to families about the vaccine. A lot of families are hesitant right now, so we talk to them one-on-one and answer any questions about the vaccine, and then help them sign up for it.”

Recruiter and advocate Garcia, who helps families enroll their children in Head Start, among other programs, is one of the staffers tasked with having these conversations. The majority of people eligible for shots in the families she works with are already vaccinated, she said, which both surprised and encouraged her. Most of the unvaccinated she’s encountered are younger people, usually in their 20s.

“Those are the ones who are more like, ‘I don’t care, I’m not going to get sick. We’re not dying,’” Garcia said. “That’s the more stubborn age where it’s hard to convince.”

Luis Valdez, who is 51, arrived in Owatonna two weeks ago from south Texas to work a job canning vegetables at Lakeside Foods until November. He, along with his wife, son, and daughter, got vaccinated during Wednesday’s event. Valdez learned about the opportunity through Tri-Valley, which has been helping his family get situated in Minnesota.

Valdez said he and his family had the opportunity to get vaccinated earlier this year in Texas, but the shot appointments filled up quickly and were tough to schedule. Also, he said he was nervous about potential side effects from the vaccine. But after doing research, he and his family decided that getting shots was the right thing to do.

Recently, the state added a sweetener, to encourage vaccination. People receiving their first shots also get a state-funded vaccine reward like free tickets to the State Fair, Valleyfair or the Minnesota Zoo. Organizers of the Tri-Valley event said most people were opting for a $25 Visa gift card. Valdez hadn’t yet decided what to claim before leaving the clinic on Wednesday afternoon.

“We’re going to go home, get on the computer, and we’ll go from there and see what the kids want,” he said.

For many people, it just takes an added bit of encouragement to get them to feel confident about receiving the vaccine, Garcia said. Sometimes, clients repeat myths about the various vaccines, including that they will turn recipients into zombies or place secret chips under the skin that will track their movements.

“What I say, kind of being sarcastic, about being a zombie is that I would rather eat than be eaten, so go get vaccinated!” she said.

Addressing the chip myth, Garcia instructs people who are concerned to get out their smartphones and pull up the location finder app they are probably already using. “See? Just with your phone people know things about you already,” she tells them. “Yet you don’t care, because we want to subtract the negative things.”

Employing humor and a light touch can often put people at ease who are on the fence. Garcia’s success depends on trust, she said. Many Latinos in and around Owatonna already know Tri-Valley as an organization that helps their communities.

“A lot of the Hispanic families, they just feel better coming here than going to Walmart or somewhere where they don’t know anybody,” she said.

Joey Peters is a reporter for Sahan Journal.

The first 100,000 Minnesotans who get their first COVID vaccination between May 27 and June 30 may choose an incentive of their preference. Minnesotans can also register through the MDH COVID-19 Public Hotline by calling 1-833-431-2053.