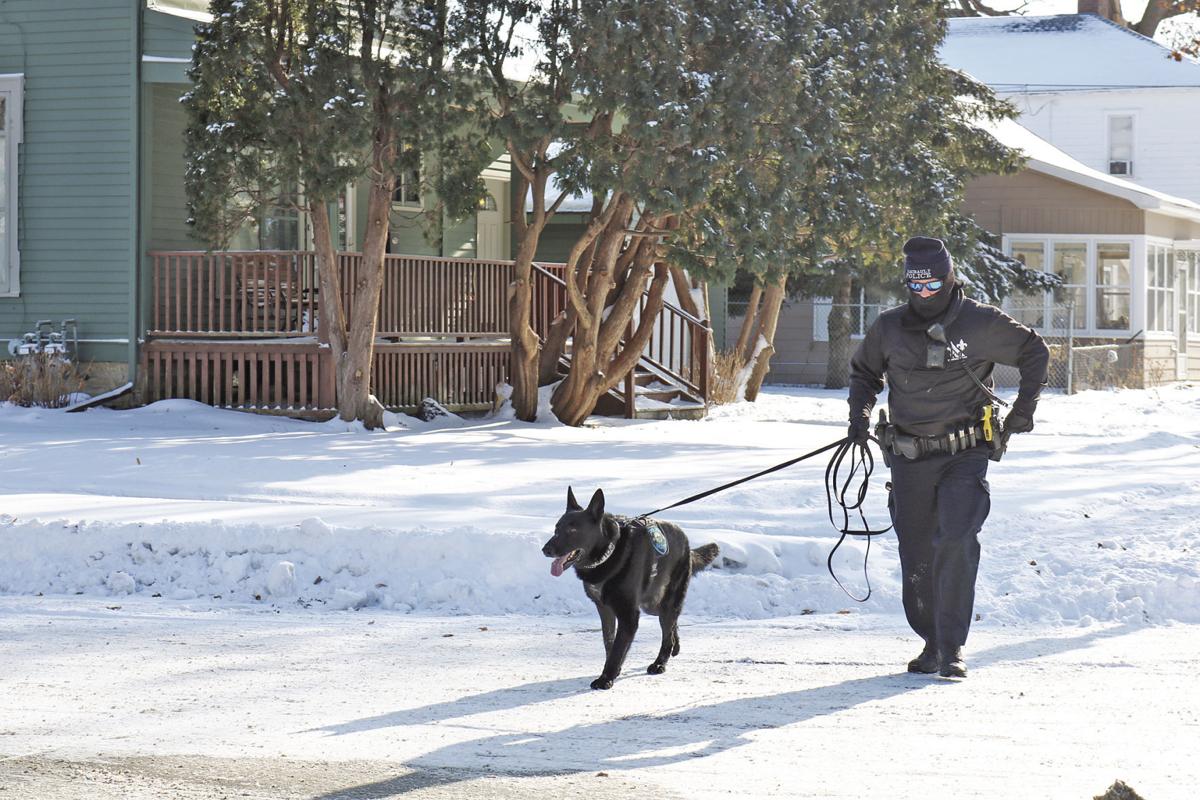 Faribault K-9 Chase and his handler, Officer Josh Alexander, assist in the three-hour manhunt Tuesday for fugitive Adam Flategraff of Waseca. Flategraff absconded from a Steele County Sheriff’s deputy at the Steele County Courthouse after being sentenced to 33 months in prison for criminal vehicular operation. Chase was instrumental in locating Flategraff, who was hiding in a garage three blocks from the courthouse. (Annie Granlund/People’s Press) 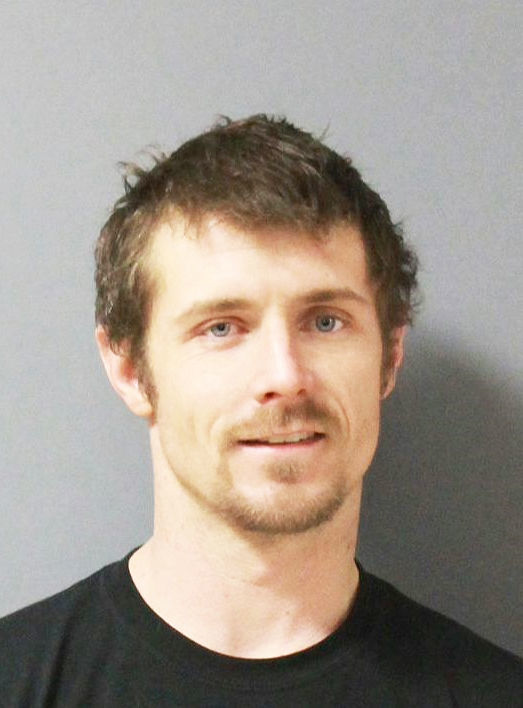 OWATONNA — A Waseca man who fled from law enforcement custody moments after being sentenced to prison at the Steele County Courthouse on Tuesday was located about three blocks away after multi-agency search was conducted for roughly three hours.

At 11:27 a.m., 27-year-old Adam John Flategraff had just been sentenced to 33 months in prison by Judge Joseph Bueltel and remanded into custody when he fled outside the holding cell prior to transport to the Steele County Detention Center, according to the Steele County Sheriff’s Office.

“As the deputy was unlocking the door to get the holding cell open, [Flategraff] took off,” said Chief Deputy Scott Hanson.

The holding cell is located on the first floor of the courthouse. Though law enforcement said that Flategraff is known to carry knives, it was not believed that he had any weapons on his person at the time of his escape.

The Steele County Sheriff’s Office worked in conjunction with the Owatonna Police Department, the Minnesota State Patrol, and Faribault Police Department K-9 Unit in an effort to locate Flategraff. He was located and apprehended at 2:17 p.m. when law enforcement found him hiding in a nearby garage at 128 E. School Street. Hanson stated that a K-9 unit from Faribault was used in the apprehension of the fugitive and that there was a “claim of minor injuries” as a result. Flategraff was treated and released on the scene by Mayo Clinic EMS personnel and was then returned to custody with the Steele County Sheriff’s Office.

“It could have just been that the K-9 grabbed at his clothing,” Hanson explained when asked if the minor injury claim was a result of the K-9 biting, scratching or simply spooking the fugitive.

Flategraff had recently been found guilty of two felony counts of criminal vehicular operation stemming from a vehicular accident the occurred in February 2017. During the October trial, Flategraff was also found guilty by a jury of four gross misdemeanor counts of reckless driving and 16 additional related charges, according to Steele County Attorney Dan McIntosh.

On the morning of Feb. 25, 2017, seven people were injured in a six-vehicle crash that occurred on Interstate 35 southbound near mile marker 26 in Steele County, just south of Highway 30 near Ellendale. It was later determined that the chain reaction crash occurred when Flategraff, who was driving a semi-truck with a 53-foot trailer, failed to react to traffic already stopped on the interstate because of two jackknifed semis farther south.

According to the complaint, witnesses reported seeing Flategraff’s semi-truck passing stopped traffic in the right lane without slowing before colliding with stopped cars in the left lane. According to troopers at the scene, Flategraff said he had looked down at his GPS until just prior to the crash and hadn’t seen the line of cars slowing and stopping in front of him. Flategraff admitted to police he had observed the roads growing more icy as he drove south and that he’d been passing vehicles in the right lane going slower than he preferred.

Crash reconstruction specialists found that in the minute prior to the crash, Flategraff’s semi was traveling between 40 to 47 mph, and in the final 10 seconds actually accelerated up to 50 mph. When he did finally apply his breaks, it took 11 seconds to come to a stop. Crash telemetry from one car that was struck showed the car had slowed to 1 mph prior to the impact, which hurled the car forward at nearly 40 mph.

The driver of one car suffered a traumatic brain injury with brain bleeding, fractured ribs and vertebrae, bruised lungs, and internal hemorrhages. A second motorist was treated at Owatonna Hospital for cuts to her head and whiplash, and the other motorists involved were transported to hospitals for treatment as well.

The troopers who reconstructed the scene found Flategraff was entirely at fault, leading to the felony charges brought against him later that same year.

According to McIntosh, since the 2017 crash Flategraff accumulated two more felony convictions to his rap sheet including drug possession in South Dakota and credit card fraud in Freeborn County. Flategraff also had a collection of charges prior to the crash, including two additional felonies in Waseca and Freeborn counties.

“You get certain weighted points on your criminal history score based on prior convictions. [Flategraff] had a couple of convictions before the date of this offense and had since picked up two completely unrelated felony convictions,” explained McIntosh, who was the prosecuting attorney assigned to Flategraff’s most recent trial. “All of those impacted the sentence he received [on Tuesday].”

Because of his fleeing from custody on Tuesday, Hanson said that the Steele County Sheriff’s Office will be pursuing a felony level escape charge, adding to Flategraff’s already colorful collection. McIntosh stated that Flategraff could have avoided an additional felony on his record had he turned himself in, explaining that it would have been considered a “safe harbor” circumstance.

“We always want to encourage people to turn themselves in peacefully,” he added.

Hanson extended immense gratitude to the assisting agencies in bringing Flategraff to custody in a relatively short time.