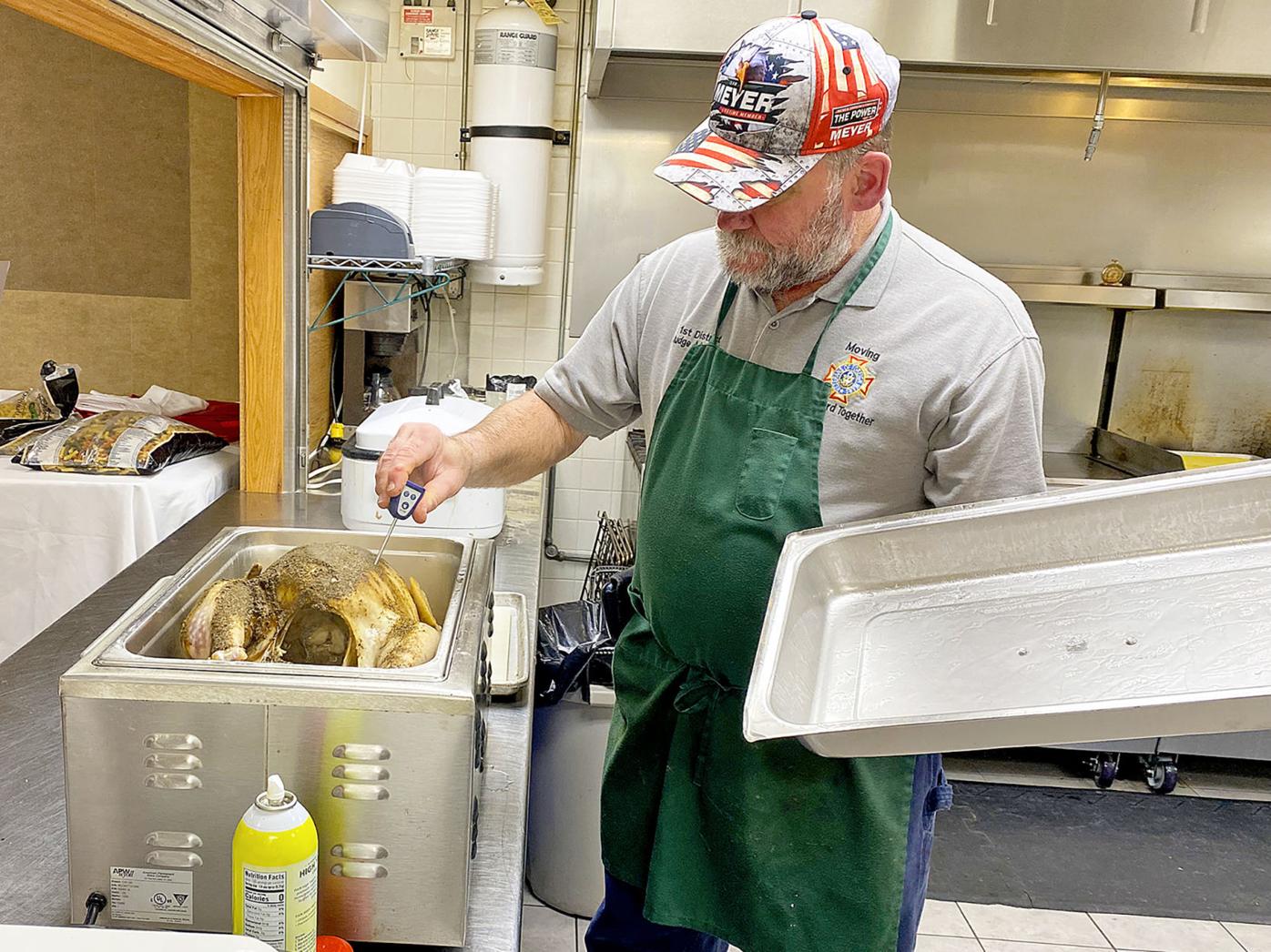 Mike Meyer, co-organizer of the holiday community dinners in Owatonna, checks the temperature on one of the 56 donated turkeys being cooked up and served for Thanksgiving this week. After a year hiatus due to the COVID-19 pandemic, the community meals are prepared to serve up to 1,000 people on Thanksgiving and Christmas. (Emily Kahnke/southernminn.com)

Two separate serving lines formed in the VFW hall in Owatonna Thursday for the 2019 Community Thanksgiving Dinner — the one on the right for those who were eating there and one on the left for the volunteers who were getting meals together to deliver. (File photo/southernminn.com)

One year ago, the feeling at the Owatonna VFW approaching Thanksgiving was somber to say the least.

Due to the COVID-19 pandemic, community dinner organizers Mike Meyer and Joe Falteysek had to make the difficult decision not to host either the Thanksgiving or Christmas meals, a first since the inception of the meals in the late 1980s. Historically, the dinners served upward of 1,000 people on both holidays.

The two men, however, decided the cancelation had to be a one time thing.

On Tuesday morning, a group of volunteers gathered back in the VFW kitchen and began preparing 56 donated turkeys, enough to feed 1,000 people on Thursday, starting at 10 a.m. The return of the annual Thanksgiving community dinner will include turkey, mashed potatoes, stuffing, corn, sweet potatoes, pie and, most importantly, good company.

“I’m very excited to see it back,” Meyer said. “We made the decision once everything started opening back up to bring the meals back.”

Meyer has been helping with the community dinners for the last decade, originally helping Mike and Trudy Pierce. The Pierces were longtime organizers of the dinners who took over for Virgina Stirens, who started the community dinner at the KC Hall. When the couple announced their retirement from the meals in 2018, Meyer and Falteysek stepped in to carry on the tradition.

With only the 2019 dinners under their belts as organizers, Meyer said the disappointment they shared when having to cancel the 2020 events still feels fresh, adding that he worried about where so many people would get a home-cooked, holiday meal.

“It was just such a disappointment for me because I enjoy helping the community,” he said. “I just love serving my community, it’s one thing I’ve always loved to do.”

Aside from providing a meal, however, the true heart of the community dinners is to ensure no one would be alone over the holidays. After canceling the 2020 events, Falteysek said he knows a lot of families depend on the community meals, so it was difficult not to be able to provide them that space to all be together.

This week they will be together again, though, and Meyer said he is looking forward to seeing everyone again after a long two years apart.

On top of getting the opportunity to have a second round of meals under his belt as an organizer, Meyer is also in the process of helping training in his next partner in the kitchen. Falteysek decided earlier this year to step down after the Christmas meal, and Jordon Vore is busy learning the ins and outs of two of Owatonna’s biggest community events.

“He hasn’t helped out with the dinners before, but he’s coming to learn and watch and see what we do,” said Meyer. “He’s ready to come and help.”

The dinner is free for anyone to attend and a free-will donation will collect money for future community dinners. People can also call in the morning of the event to place delivery orders. Meyer said, as of now, the Christmas dinner is scheduled to take place as planned on Saturday, Dec. 25.

For deliveries: People can begin calling in delivery orders at 7:30 a.m. on Thursday by calling the VFW at 507-451-1001. Orders are limited to four meals per household.

This event is free and open to the public. A free-will donation will collect funds for future holiday community dinners.