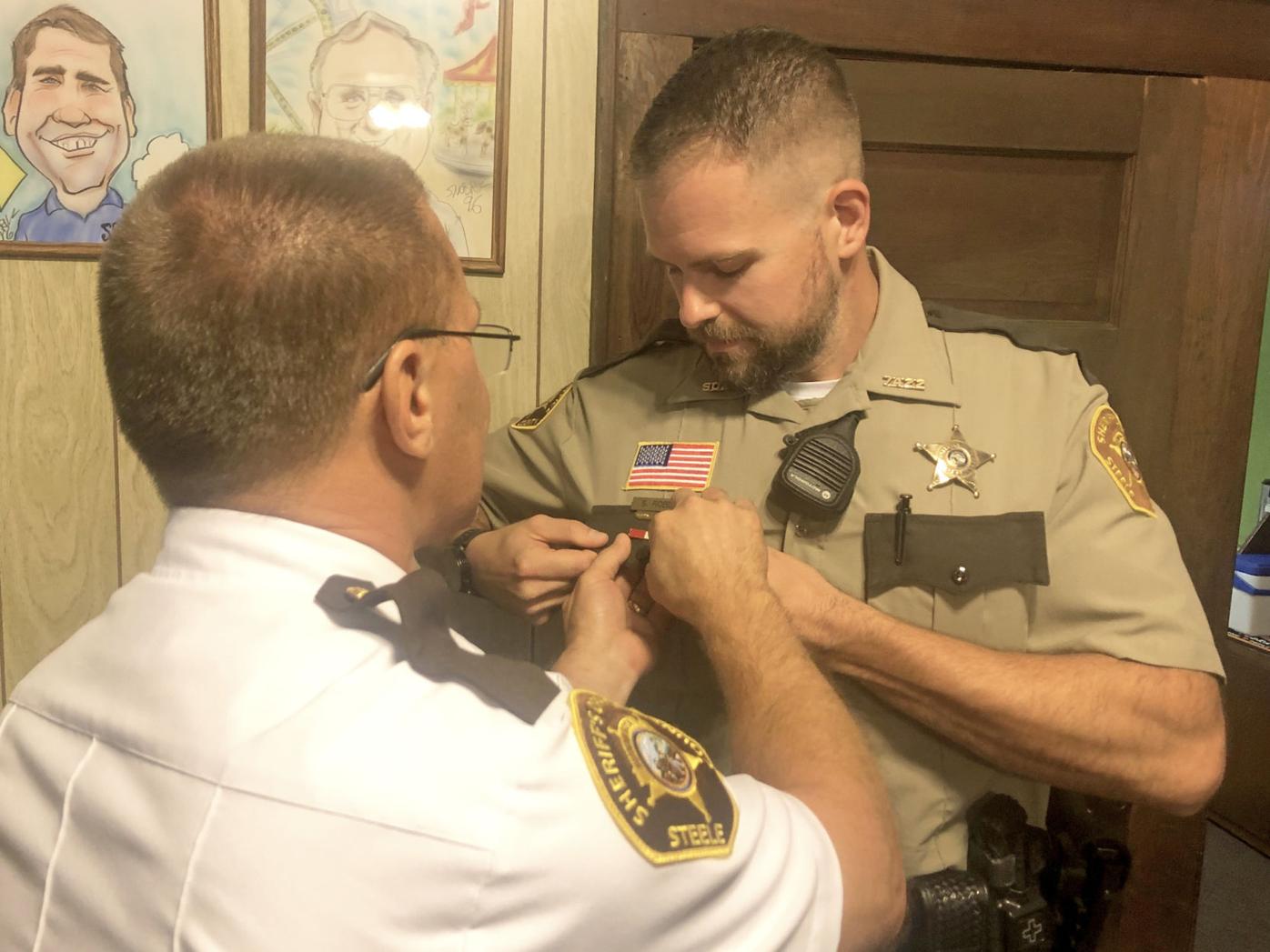 Steele County Sheriff Lon Thiele pins the lifesaver ribbon to Deputy Sean Robbins on Thursday night during a meeting of the Steele County Free Fair Board of Directors. Robbins saved the life of a fair-goer who was choking on food near Fair Square. (Annie Granlund/southernminn.com) 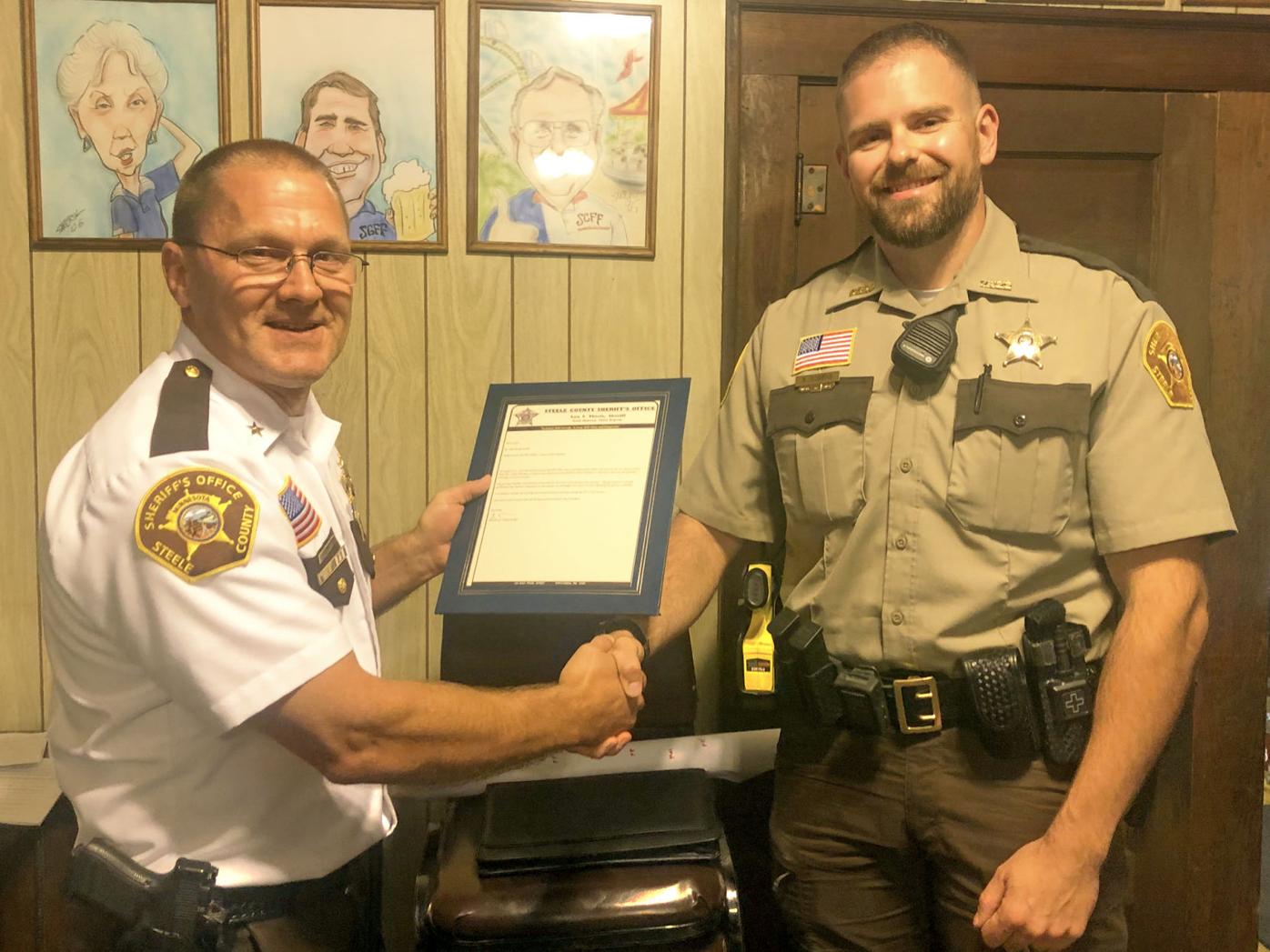 The Steele County Free Fair prides itself in many things: being big, being fun and being safe.

During the fair board meeting Thursday night, a member of local law enforcement was thanked and recognized for ensuring that the fair upheld that latter mission for one specific person in crisis.

On the Saturday of the 2021 fair, Steele County Sheriff’s Deputy Sean Robbins leaped to action when a fairgoer was choking in Fair Square. Robbins was able to dislodge the food from the person’s throat within seconds of being alerted the person was in danger.

“He saved that person’s life,” said Steele County Sheriff Lon Thiele. During the Thursday night meeting, Thiele awarded Robbins with the lifesaver award, which is awarded to peace officers who distinguish themselves by an act that contributes to the saving of a person’s life.

Robbins received a standing ovation by the fair board and gratitude from Fair Board President Dan Deml and Fair Manager Scott Kozelka. Kozelka praised Robbins’ for being a perfect example of what makes the Steele County fair stand out from the rest.

“Without people like you making our fair safer, we wouldn’t be the place we are,” Kozelka said.

Also during the board meeting, the group discussed the attendance of the Steele County Free Fair, which is down 6% from the 2019 fair. The estimated attendance, which is calculated by vendor sales, beer tickets, grandstand tickets, ATM transactions, and a variety of other indicators, came in at 303,091 — almost 20,000 people less than the last fair in 2019.

There was no Steele County Free Fair in 2020, due to the COVID-19 pandemic.

Despite attendance being down, Kozelka said the dollars spent at the fair were up. Invoices are still coming in, but Board Vice President and Publicity Director Wayne Steele said in a news release earlier this week that they saw “record gross receipts.”

The fair saw one “major hiccup” in 2021 with the cancellation of the Friday night grandstand concert, featuring country music star Craig Morgan. Treasurer Tim Arlt said they are currently in the process of filing an insurance claim for the canceled show, for which they refunded the money to those who purchased tickets.

The Sunday Demo Derby, however, was completely sold out. Board member Jim Abbe said that after ticket sales were closed at the grandstand, they allowed people to pay for admission with cash that is to be donated to the United Way of Steele County and Community Pathways of Steele County at a later date.

Volunteers with the United Way worked the grandstand each day of the fair.

Thiele told the fair board the overall calls for service at the Sheriff’s Office were down to the lowest they have been in nine years. The calls of service, which include lost persons, trespass notices, property inquiries and other information calls, totaled 339 calls in 2021. In 2019, there were 510 calls.

A full breakdown of the revenue and attendance will be presented at the Steele County Agriculture Society meeting at 7 p.m. Nov. 4. The location is yet to be determined.