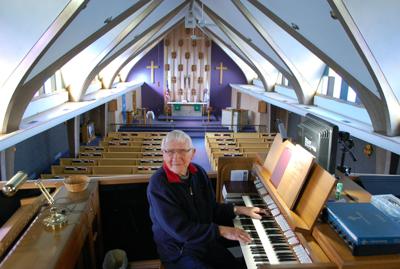 The first time he played the organ for an entire church service, Mert Grabau had to play an old organ that was raised slightly above the front of the congregation.

“That was scary,” he said. “It squeaked and squawked once in a while.”

Grabau, 93, played the organ at churches in Nebraska for 16 years, then in Colorado for 10 years before he and his wife Irma moved to Owatonna in 1967. He most recently was the organist at Redeemer Lutheran Church, where he also oversaw the choir. He also played the organ at weddings and funerals and filled in for churches needing an organist. He estimates that he has played at 17 churches in the Steele County area over the years.

“At least we knew where we’d be on a Sunday,” he said.

After 73 years of playing the church organ, Mert decided that it’s time to retire. A reception to honor Mert and Irma is scheduled for 10:15 a.m. Sunday at Redeemer Lutheran Church, 1054 Truman Ave., Owatonna. A short musical celebration featuring organist Gloria Kenow will follow the reception. COVID-19 precautions of wearing a mask and social distancing will take place.

He said he’ll miss it, but he’ll continue to play from time to time and has an organ at their home. When he was a child growing up on a farm in Nebraska, his mother would show him the keys on the old reed organ they had.

He knew he wanted to teach in a parochial school and they usually wanted someone who could also play the organ, he said. He took organ classes at Concordia University in Nebraska, which included playing a hymn at a chapel service once a semester. It was nerve wracking to play in front of dozens of his fellow organ students, he said.

His first job was teaching 32 students in eight grades at a one-room Lutheran parochial school in Nebraska. He then moved to a bigger school in Colorado before coming to Owatonna, where he taught fifth grade until he retired in 1989.

In each location, he and Irma would look for a church that had an organ. Redeemer Lutheran Church had a small, old organ when he first began to play for the church services and then it brought in a new pipe organ four years after he became the organist, he said.

“Sixty-nine of these 73 years, I’ve been listening to him,” Irma said.

Irma plays the piano and they sometimes play duets or she accompanies him while he sings. Irma also fills in for Mert playing the organ while he receives Communion during church services.

Mert enjoys hearing the support of the congregation singing as he plays.

“When you’re playing, you’re leading the congregation in their singing and you feel like a guy that’s driving a tractor on the farm. That machinery is going along behind him because he’s in charge and driving the tractor,” he said.

A reception will be held for Mert and Irma Grabau to celebrate Mert's 73 years playing the church organ.