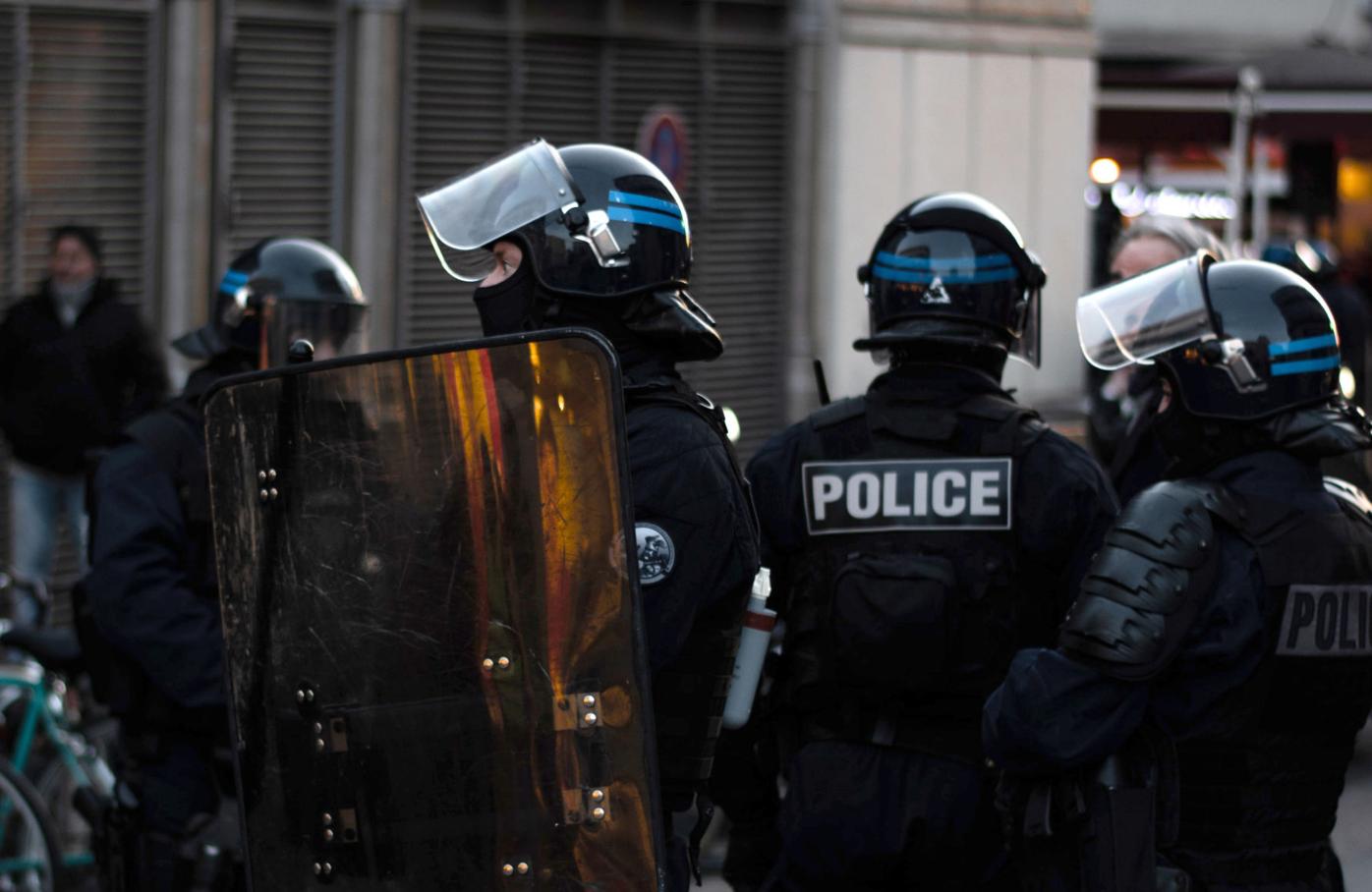 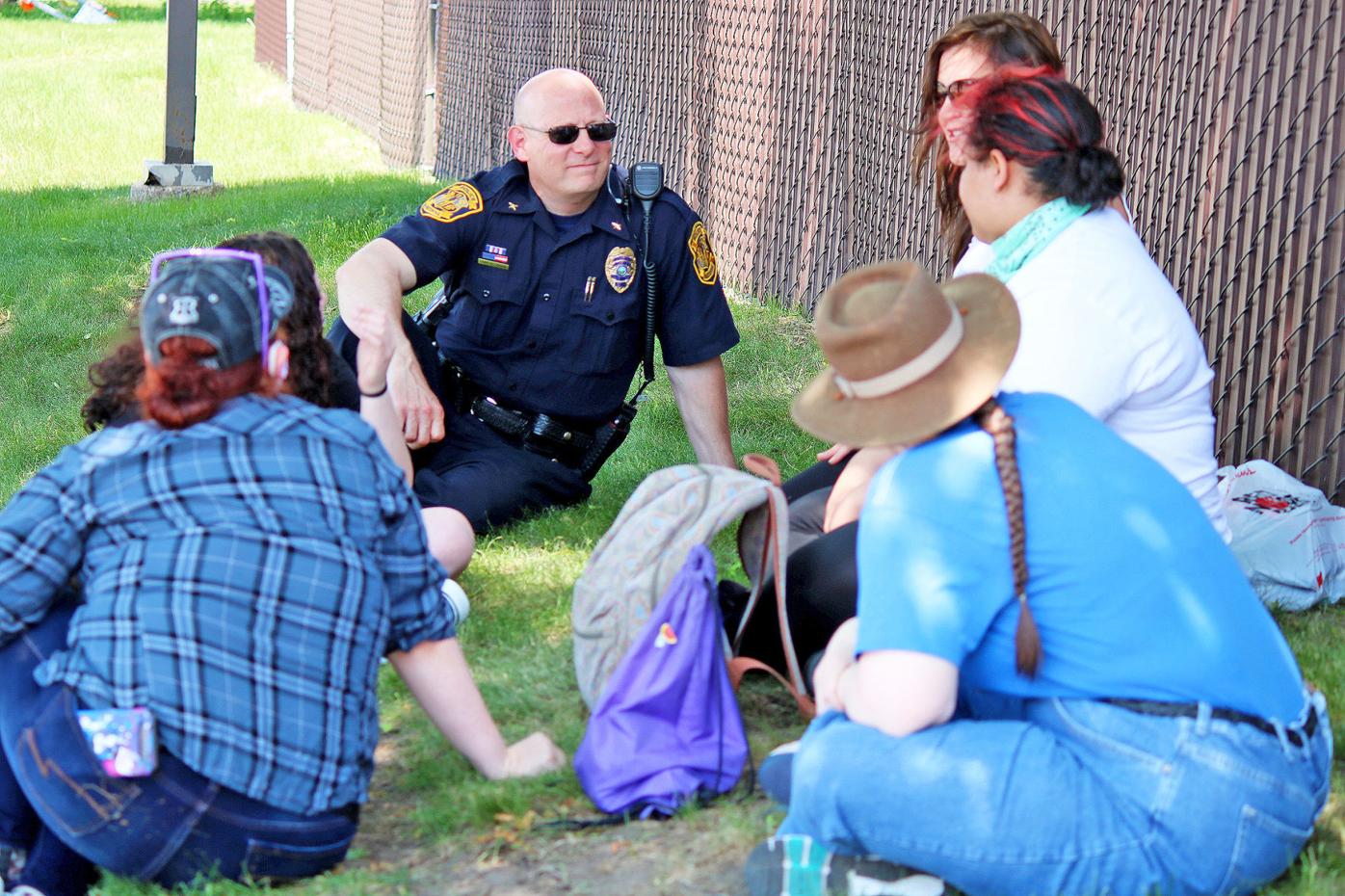 Owatonna Chief of Police Keith Hiller shares personal experiences with a group younger residents during an open dialogue event in June outside the Law Enforcement Center. After a 10-hour long protest the weekend prior, Hiller and several of his officers decided to approach the second event differently by initiating conversations from the beginning with those who were in attendance. (Press file photo)

Owatonna Chief of Police Keith Hiller shares personal experiences with a group younger residents during an open dialogue event in June outside the Law Enforcement Center. After a 10-hour long protest the weekend prior, Hiller and several of his officers decided to approach the second event differently by initiating conversations from the beginning with those who were in attendance. (Press file photo)

The agreement on police reform was finally reached last week between the DFL, led by Gov. Tim Walz, and Republicans, who control the Senate. It passed before the end of the special session, marking a rare bipartisan triumph at the capitol.

The discussion around police reform was triggered by the late May death of George Floyd. Minneapolis Police Officer Derek Chauvin has since been charged with second- and third-degree murder and second-degree manslaughter in the case, and his three fellow officers on the scene stand charged with aiding and abetting murder.

In the wake of Floyd’s death, new questions resurfaced about police practices, especially those of the Minneapolis Police Department. In particular, critics raised questions about use of force policies and how use-of-force and other complaints are handled by departments.

Last month, Walz and the legislature’s POCI (People of Color and Indigenous) caucus proposed nearly two dozen reforms. About half enjoyed bipartisan support, but agreement between Republicans and DFLers over the package fell apart at the last minute. With Walz seeking to extend his Peacetime Emergency Declaration, he was forced to call yet another special session this month. With a month of additional negotiations under their belts, all sides were finally able to reach an agreement they felt comfortable with.

Because local departments are given significant latitude to implement their own policies, the effect of the new bill could vary from department to department. It includes a ban on chokeholds and warrior-style training and provides for additional training and resources for officers.

It also creates a duty to intervene when officers see a colleague acting inappropriately, includes measures designed to improve transparency and accountability in cases of alleged misconduct, and encourages departments to incentivize officers to live in the communities they patrol.

Legislators on both sides of the aisle emphasized that the legislation is just a start. The bill’s lead sponsor in the House, DFL Rep. Carlos Mariani, of St. Paul, said that he believed the bill passed by the House in the previous session was much stronger.

Sen. Jeff Hayden, DFL-Minneapolis, who sits alongside Mariani in the POCI caucus, said that one of the bill’s most significant weaknesses is that it doesn’t do nearly enough to hold bad actors accountable. He expressed hope that future legislation could rectify the issue.

Senate Majority Leader Paul Gazelka, R-Nisswa, left the door open to changes. However, he emphasized that further legislation should be tackled in a regular session, to give ample time for legislators to hear from all sides in committee.

Though DFLers say they never proposed it, left-wing calls to “abolish police” became a political flashpoint at the capitol and elsewhere. Senate Republicans vowed to oppose any legislation that would defund or abolish police, as supported by members of the Minneapolis City Council.

Rice County Sheriff Troy Dunn, who serves as president of the Minnesota Sheriffs Association, said that while training and measures to ensure department accountability are important, he’s deeply concerned about what abolishing police” could mean for public safety.

Rep. Jeff Brand, DFL-St. Peter, has taken a more cautious position on police reform than some of his DFL colleagues. Last month, Brand voted against some of the measures proposed by the POCI caucus, and he’s made his opposition to “abolishing the police” clear.

Still, Brand said that he supported most of the recommendations in Attorney General Keith Ellison’s task force on police reform and was pleased to see them included in the final bill. Given that Floyd’s death occurred in Minnesota, Brand said it was crucial that legislators find a way to pass something.

“All of the eyes of the world were on us, and we’ve done something,” he said. “It’s obviously a compromise … but it’s going to make a difference.”

Still, some of the training included in the bill might be harder for some departments to implement than others. Nicollet County Sheriff David Lange said that while his department conforms by the new policies in many areas, changes are needed in others.

“We’ll have to do some work to abide by (the new policies),” he said. “It comes down to time and money.”

In 2017, Minnesota legislators passed a bill requiring all officers to take at least 16 hours of comprehensive de-escalation training. Thanks to a federal grant received by the Rice County Chemical and Mental Health Coalition, Rice County law enforcement have been able to take the much more comprehensive 40-hour training. Among the issues addressed in the course were military reintegration, officer mental health, suicide awareness, cultural sensitivity and youth mental health issues. The goal is to have every law enforcement officer in Rice County take the training before the grant expires.

While de-escalation is already a vital part of training at the Owatonna Police Department, Chief Keith Hiller said that he is concerned about some of the language when it comes to responding to a violent individual who isn’t posing as a threat to the peace officer or others.

“We just had an incident last week where a family called because an individual was clearly suffering from an acute mental health episode and was destroying their house,” Hiller said. “The family called in crisis and wanted help, but under the new standard all we could do is use our de-escalating efforts and crisis communication to bring this person to a negotiable level as they did thousands and thousands of dollars worth of damage to their family’s home.”

Hiller said that the police tried to engage crisis intervention mental health workers to the scene, but that the workers declined to come because the individual had a reputation of being violent and aggressive.

“We would never go in and just grab someone, but under this new language we really have to take a step back and hope they don’t hurt themselves,” Hiller said. “Between balancing the law and our presence alone possibly escalating a situation, the potential for liability against law enforcement is very real to use. We are really going to have to re-evaluate how we respond to those types of calls.”

Faribault Police Chief Andy Bohlen, who recently implemented changes to his department’s use of force policies, described the legislation as a “good compromise.” He said that reforms were needed and still may be needed in some areas, citing the officer arbitration process.

“I think a lot of the reforms that they passed were not surprising,” he said. “I think departments understand that some things needed to be revised and changed.”

In Owatonna, Hiller said that he felt the legislation is necessary to advance the profession and that he was happy to see policies included that are already common procedures at the Owatonna Police Department.

“The Owatonna Police Department is rather progressive and nearly meets all the proposed reforms,” Hiller said. “I think it validates the police in Owatonna — we really strive for excellence and meet the 21st century policing model and all progressive measures and professional standards.”

Northfield Police Chief Monte Nelson, who retires Friday, also said that he wasn’t particularly surprised by any of the measures passed in St. Paul. Nelson said that he understands the urgency behind calls for reform in the wake of Floyd’s death. At the same time, Nelson hopes legislators would be careful not to pass bills that create new mandates without addressing the issue effectively. He also urged legislators to take a holistic approach that looks beyond simply law enforcement.

Nelson said he was reasonably pleased with the legislation and glad to see agreement between law enforcement groups and police reform advocates. He said that the bill was well timed, as his department is in the middle of a policy rewrite.

“I was glad they came together and managed to get something passed, because then we’ll be able to look at the changes and include them in our new policies,” he said. “If they waited another six months, we’d have had our policies written by then.”

Other departments are moving quickly to bring their policies in line with the new mandates. Minnesota Sheriffs Association President Bill Hutton said that he’s on the phone on a daily basis with law enforcement officials across the state.

Hutton said that he appreciated the opportunity to provide feedback on the bill on behalf of law enforcement officials across the state. He said the new legislation will mark just the beginning of an ongoing conversation between law enforcement agencies and those they serve.

“People are looking for change, and sheriffs need to listen,” he said.

Though it enjoyed broad support, 29 representatives and seven senators still voted against it. Most were Republican, with just three Senate DFLers and one House DFLer, Rep. Mike Sundin of Esko, voting no.

Known for their outspoken conservative views, Drazkowski and Munson are two of the four legislators who split from the main Republican caucus last year to form their own caucus as “New House Republicans.”

Drazkowski said that he couldn’t support the bill because while he understands the concerns regarding Minneapolis’s Police Department, he believes the bill will inflict too many costly, restrictive mandates on small police departments throughout greater Minnesota.

“We don’t need a one size fits all approach,” he said. “Minneapolis is the city that’s having a problem.”

Still, about half of House Republicans and a large majority of the Senate GOP came around to support the final bill. Rep. John Petersburg, R-Waseca, said that negotiations between the two special sessions had a dramatic impact.

“The bill considered in the previous session was very controversial,” he said. “Then we were able to work with sheriffs and the Minnesota Chiefs of Police Association, and it became a bill that was much more palatable.”

While Republicans may have been divided over the final bill, they were united when it came to an amendment offered by Jim Nash, R-Waconia. Nash’s measure would have instructed Minnesota Supreme Court Chief Justice Lorie Skjerven Gildea to appoint an independent panel to investigate civil unrest in the wake of Floyd’s death.

Nash’s amendment was defeated largely along party lines. While a handful of DFL legislators from greater Minnesota backed it, local Reps. Todd Lippert, DFL-Northfield, and Jeff Brand, DFL-St. Peter, did not.

DFL House Majority Leader Ryan Winkler noted that the measure was already part of the PROMISE Act, which passed the House last session. That bill would have provided assistance for Minneapolis to rebuild in the wake of the riots, but died in the GOP-controlled Senate.