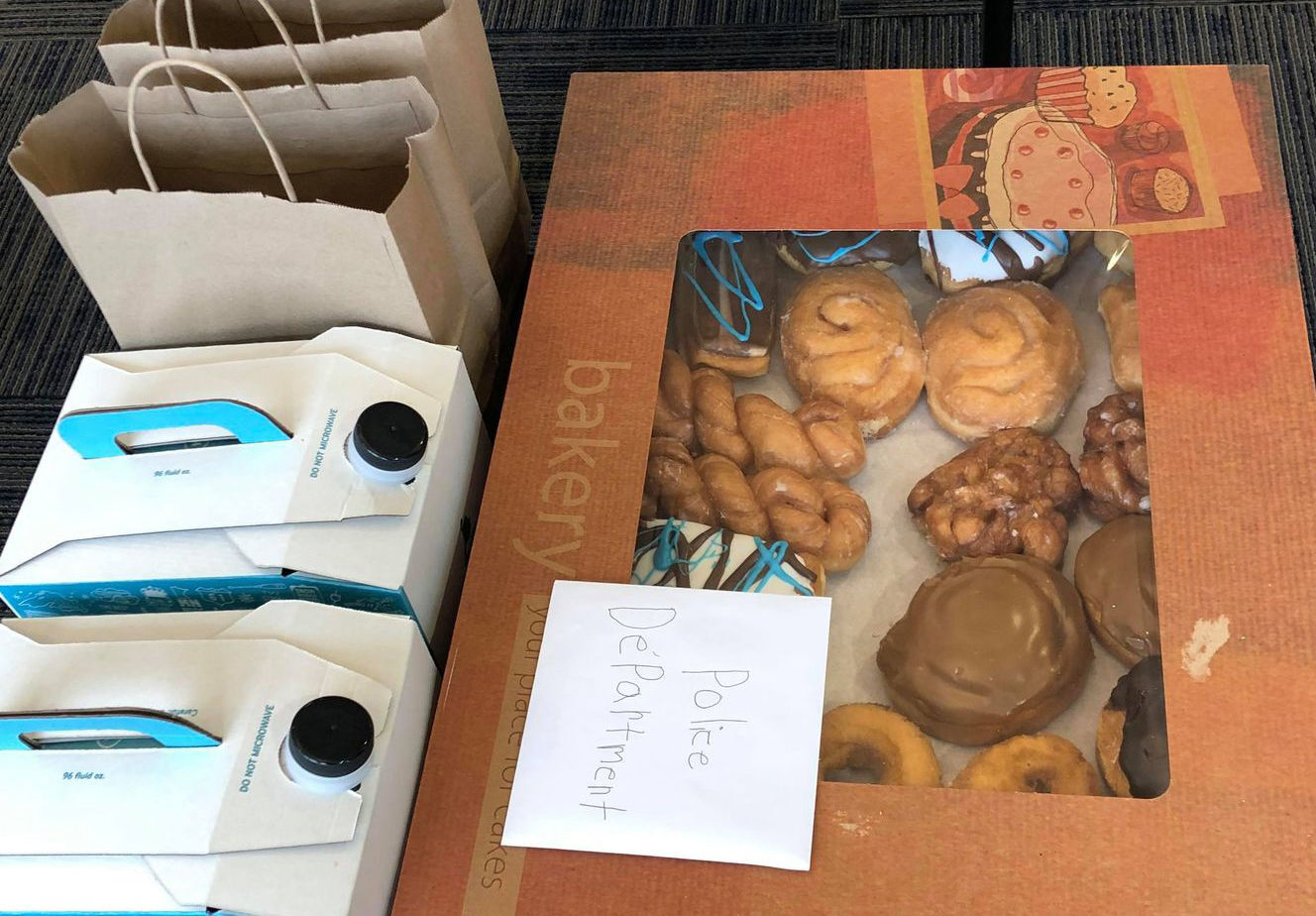 With the money her mom raised after someone stole her $50, 7-year-old Mayzie Stenbakken decided to donate donuts and coffee to the Faribault Police Department. (Photo courtesy of Jill Stenbakken) 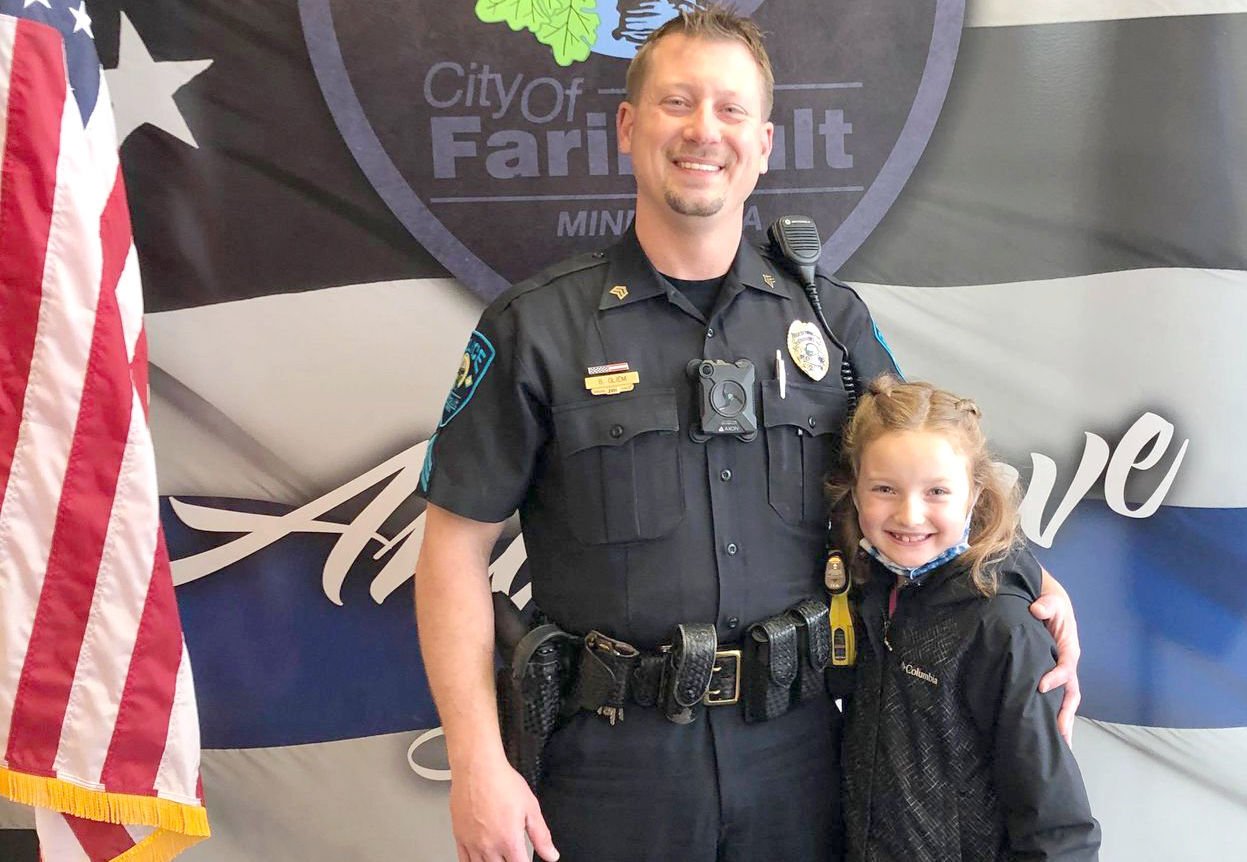 Sergeant Brandon Gliem of the Faribault Police Department poses for a photo with Mayzie Stenbakken, 7, the day she donated coffee and donuts to the department. (Photo courtesy of Jill Stenbakken)

With the money her mom raised after someone stole her $50, 7-year-old Mayzie Stenbakken decided to donate donuts and coffee to the Faribault Police Department. (Photo courtesy of Jill Stenbakken)

Sergeant Brandon Gliem of the Faribault Police Department poses for a photo with Mayzie Stenbakken, 7, the day she donated coffee and donuts to the department. (Photo courtesy of Jill Stenbakken)

Faribault resident Jill Stenbakken delivered some bad news to her 7-year-old daughter Mayzie after school March 24, but not without sharing some happy news, too.

Mayzie, a first-grade student at Divine Mercy Catholic School, had been saving her birthday and tooth fairy money for something special, but she wasn’t quite sure what. She had $50 in her wallet when someone broke into Jill’s car on a Wednesday, and stole Mayzie’s cash.

“I was just amazed that someone would do that in broad daylight in the middle of the day,” Jill said. “Initially I thought maybe a branch had busted it, but then I saw the wallet was sitting there empty.”

Jill had returned to work at the Faribault Pet Store after taking a lunch break when she noticed her car had been broken into. Devastated for her daughter, she called the Faribault Police Department’s non-emergency number and reported the theft. Unfortunately, she learned car break-ins had been happening quite a bit in Faribault.

Jill posted a couple pictures on Facebook of her shattered car window along with a brief description of what had happened. The post was met with an outpouring of support and empathy.

“All of a sudden a flood of people reached out and wanted to donate money to Mayzie,” Jill said. “So many people donated $10 up to $25 dollars back to her. I was able to tell her that something bad had happened but also how many wonderful people are out in the world who had made up for it, too.”

Mayzie was sad to hear that someone had stolen her $50, but when her mom told her about everyone in the community who had donated money to her, she said, “I felt good, and it made my heart happy.”

Jill also told Mayzie the individual who stole her money was no longer on the loose. Later in the afternoon, Jill had received a follow-up from the department that a similar car break-in had occurred outside a house near Caribou Coffee. The individual was caught and taken into custody.

“They’re very confident that was the same guy who had broken into my vehicle,” Jill said. “So it was relieving as a parent to tell your child that something bad happened but it was taken care of.”

Mayzie was so happy to hear the police caught “the bad guy,” as she called him, that she sent the department a thank-you letter. She and her mom talked about ways to give back to the community using the donations for Mayzie, which were double the amount that was stolen. Jill suggested they bring donuts and coffee to the department, and Mayzie agreed.

“I was happy I did that,” Mayzie said.

In addition to treating FPD officers and staff, Mayzie also donated a portion of the money to a girl in her grade at Divine Mercy who is battling brain cancer. Ella Banon will soon undergo eight months of treatment, including chemo and radiation. The daytime shift of the Faribault Police Department recently participated in a parade Banon’s family organized for her on March 21.

Mayzie said helping out a classmate and her family also felt good.

“Thank you so much to the community for their kind hearts,” said Jill, “and being able to make a bad situation into something pretty cool.”

Jill and Mayzie Stenbakken would like to spread the word about a golf tournament in honor of 7-year-old Ella Banon, who is in the same grade as Mayzie at Divine Mercy.

Banon was diagnosed with Grade 3, anaplastic ependymoma and will undergo eight months of treatment, including radiation and chemotherapy.

All teams must be paid in full by April 12. Silent auction and burger basket tickets are available to purchase now through April 16 by contacting Sarah Buhrandt at 507-491-6083, or stop by Faribault Vacuum and Sewing Center. Due to COVID-19 restrictions, all tickets need to be purchased in advance.

A gofundme page has been set up to help Ella's family defray expenses during her treatment. Find it at bit.ly/31LMuGH.