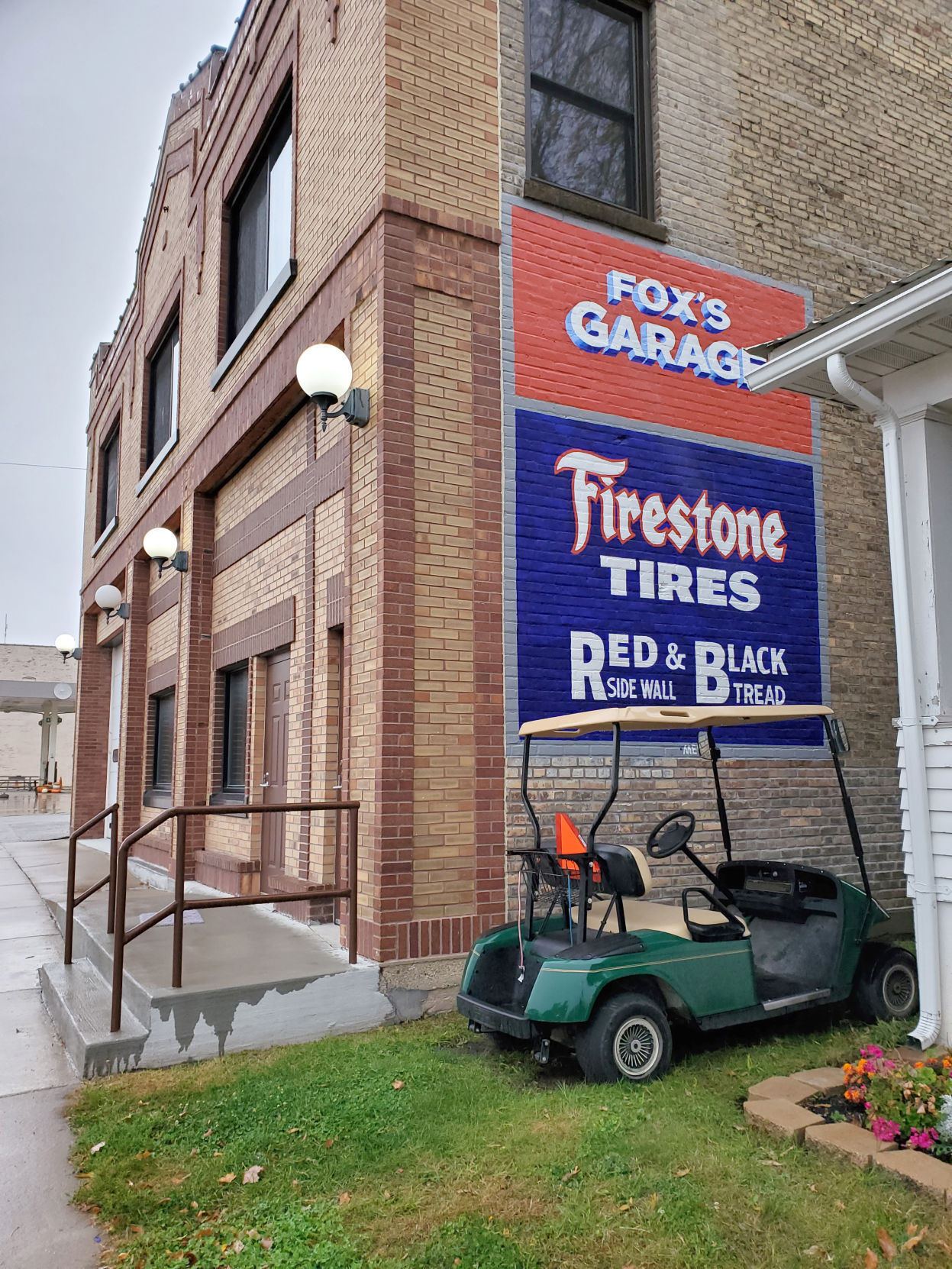 The Firestone advertisement was repainted on the side of Bob Peterson’s building Thursday and Friday evening It’s believed this was the advertise painted on the building when it was built in 1916. (Michelle Vlasak/southerminn.com) 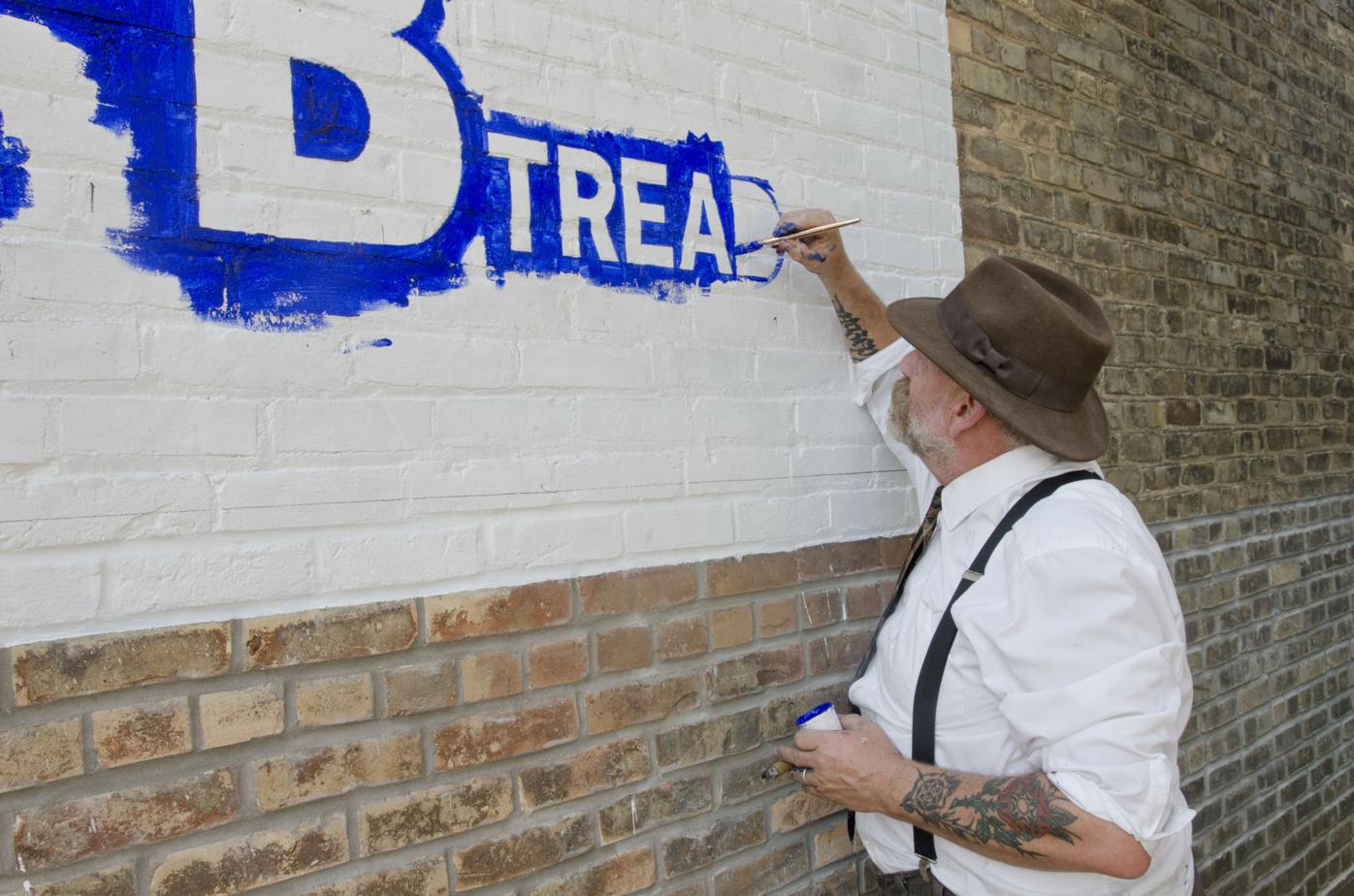 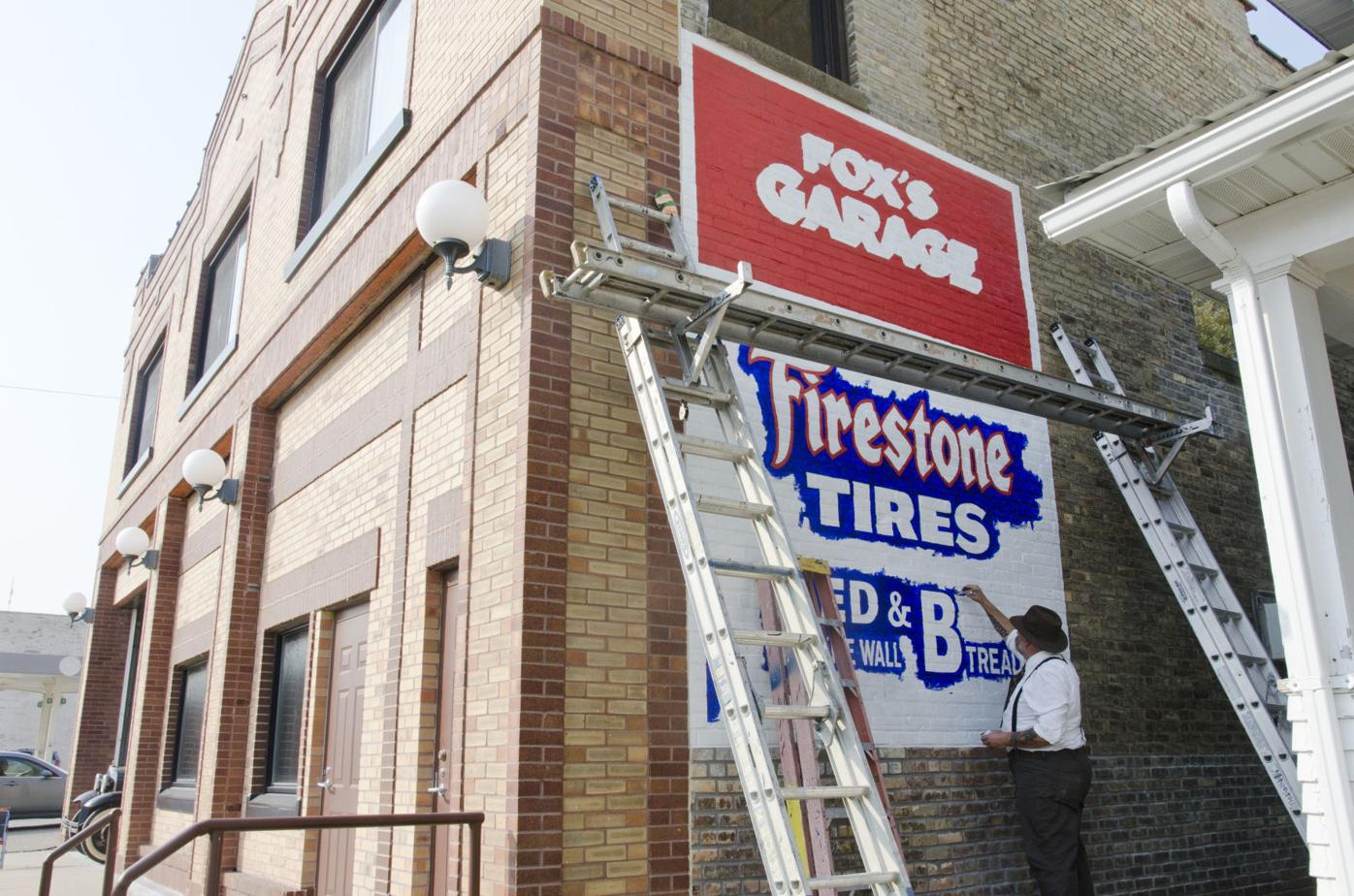 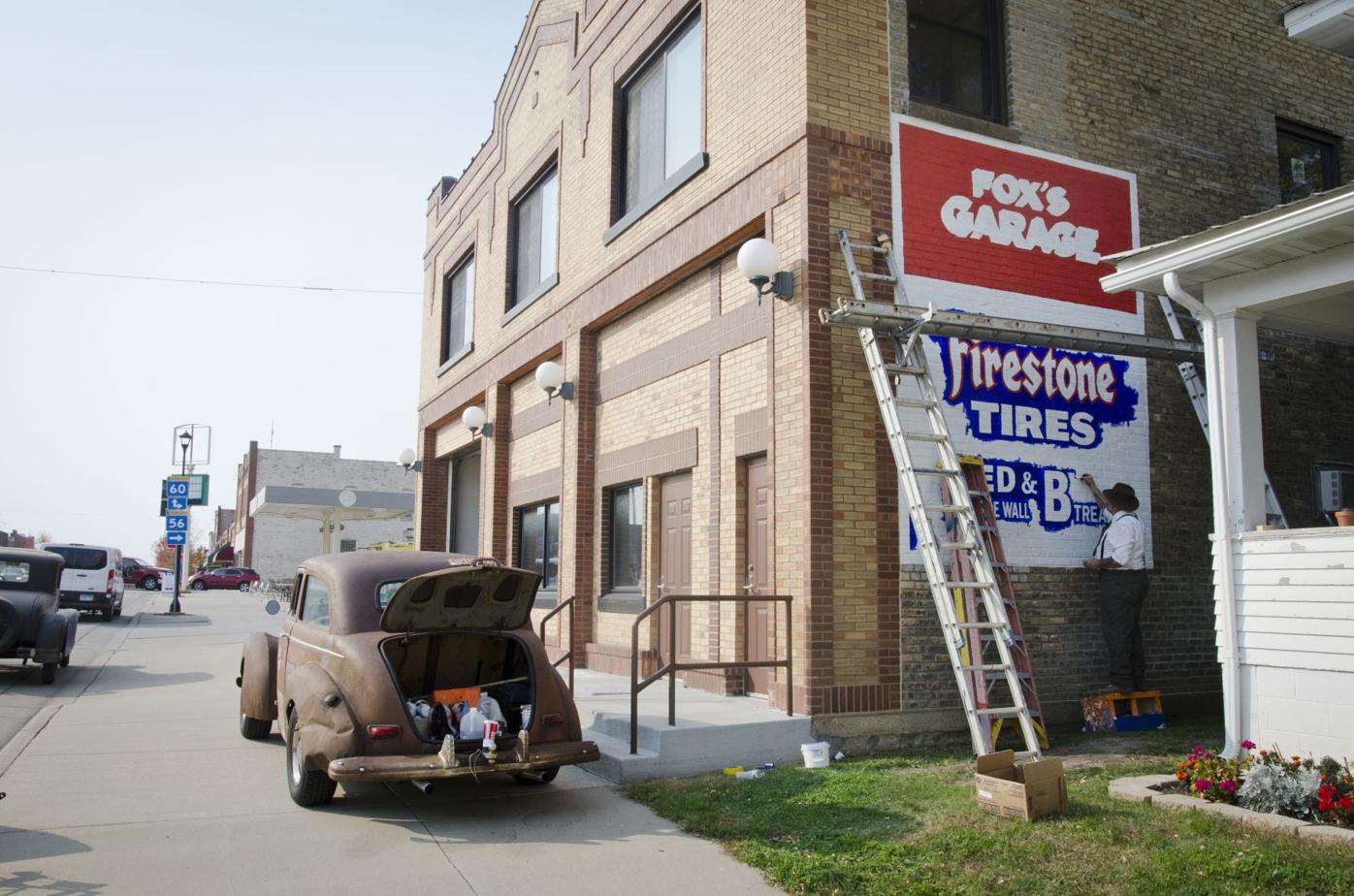 Mike Meyer not only dressed the part to paint the old-style advertisement, he also brought his old-style car to add to the mix. (Michelle Vlasak/southerminn.com 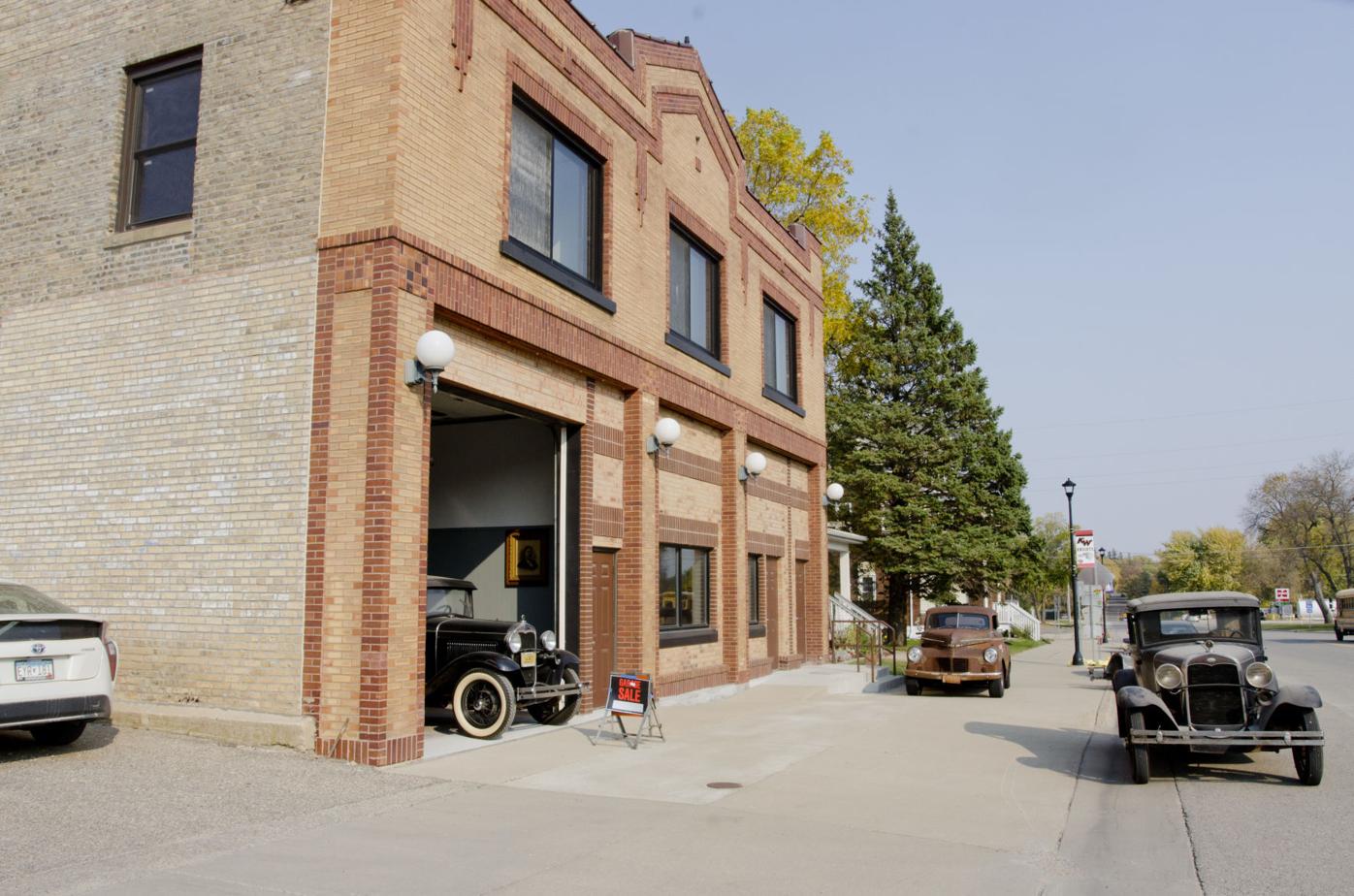 Bob Peterson has plans for the other side of the building including a mural of Kenyon and another original advertisement. (Michelle Vlasak/southerminn.com)

The Firestone advertisement was repainted on the side of Bob Peterson’s building Thursday and Friday evening It’s believed this was the advertise painted on the building when it was built in 1916. (Michelle Vlasak/southerminn.com)

Mike Meyer not only dressed the part to paint the old-style advertisement, he also brought his old-style car to add to the mix. (Michelle Vlasak/southerminn.com

Bob Peterson has plans for the other side of the building including a mural of Kenyon and another original advertisement. (Michelle Vlasak/southerminn.com)

For years, Bob Peterson would go down to the old Second Street garage, play cards and pool, and imagine what the old ad on the east side of the building might look like.

But that was before he bought the building.

Now, after three years of planning, the Firestone tire ad painted on the brick more than a century ago is back.

“I’ve seen that sign up forever,” said Peterson. “I didn’t know I was ever going to end up with the building.”

After being able to connect with Mike Meyer of Meyer Signs in Mazeppa, Meyer was thrilled to begin working with Peterson. They researched what the original ad looked like since they couldn’t make out all the writing. Peterson knew the building was built in 1916 as Fox’s Garage and says that was likely the same ad that was on the building shortly after it was built since it appeared in many magazines that year.

Meyer uses some techniques that were used in the old days like transferring the image with patterns of small holes and charcoal.

“That’s how a lot of stuff was done back then, and it’s still done today,” said Meyer of the pattern transfers. “I’ve seen the newer technology where they try and put a sticker on a bill wall like this, and it just doesn’t work because the weather gets behind it and peels it up.”

He also used another technique, called “cutting in,” which separates two colors by only using the paint brush, and without masking tape or another aid. Meyer used water-based acrylic paint instead of the long-lasting but hazardous lead paint.

Meyer recalls seeing the wall for many years, and never knowing who owned the building until Peterson contacted him. He also enjoys tracing back into history, especially in cases like this when recreation is involved.

“All we could see is the “R” and “B,” so I did some research and I found the ads,” said Meyer. “Firestone is now red and white, but in the early days it was blue and orange. You’ll see a lot of porcelain signs that are both colors, but this is how it was.”

While painting Thursday and Friday afternoon, he even dressed the part of a sign painter from those days, complete with a top hat, cigar, long-sleeve button down shirt, suspenders and an old Studebaker filled with his painting equipment.

“Part of it is entertainment, it really is,” said Meyer his old time garb.

The top of the ad features the words Fox’s Garage, the name of the building when it was first built. Peterson says from 1916 to 1958, the building housed the original Ford garage and it was strictly a Ford garage from the late 30s to 1958.

On the west side of the building, Peterson wants to paint another sign with the building’s former names, including Feeley Ford or Viking Auto. He also hopes to have a mural of Kenyon’s Main Street from the 1920s-30s painted on the remainder of the wall. Those plans have been put on hold as Peterson has been unable to get permission from the owner of the neighboring lot.

“I was glad to get this sign done just the way is was originally,” said Peterson.

Peterson says he’d like to turn the old garage into a museum where he can display more of his memorabilia. Currently, he has items in other locations like the Kenyon Fire Hall and Gunderson House.

“It’s slowly getting in shape, but it all takes money,” he said.

The Fox Garage housed many vehicles over the years, and also housed the Kenyon Fire Department. Fox sold cars there, as did several others. In 1959, the building was used as the Army Reserve Armory for Co. C 103 Transportation Co. The city of Kenyon turned it into the fire hall in 1965.