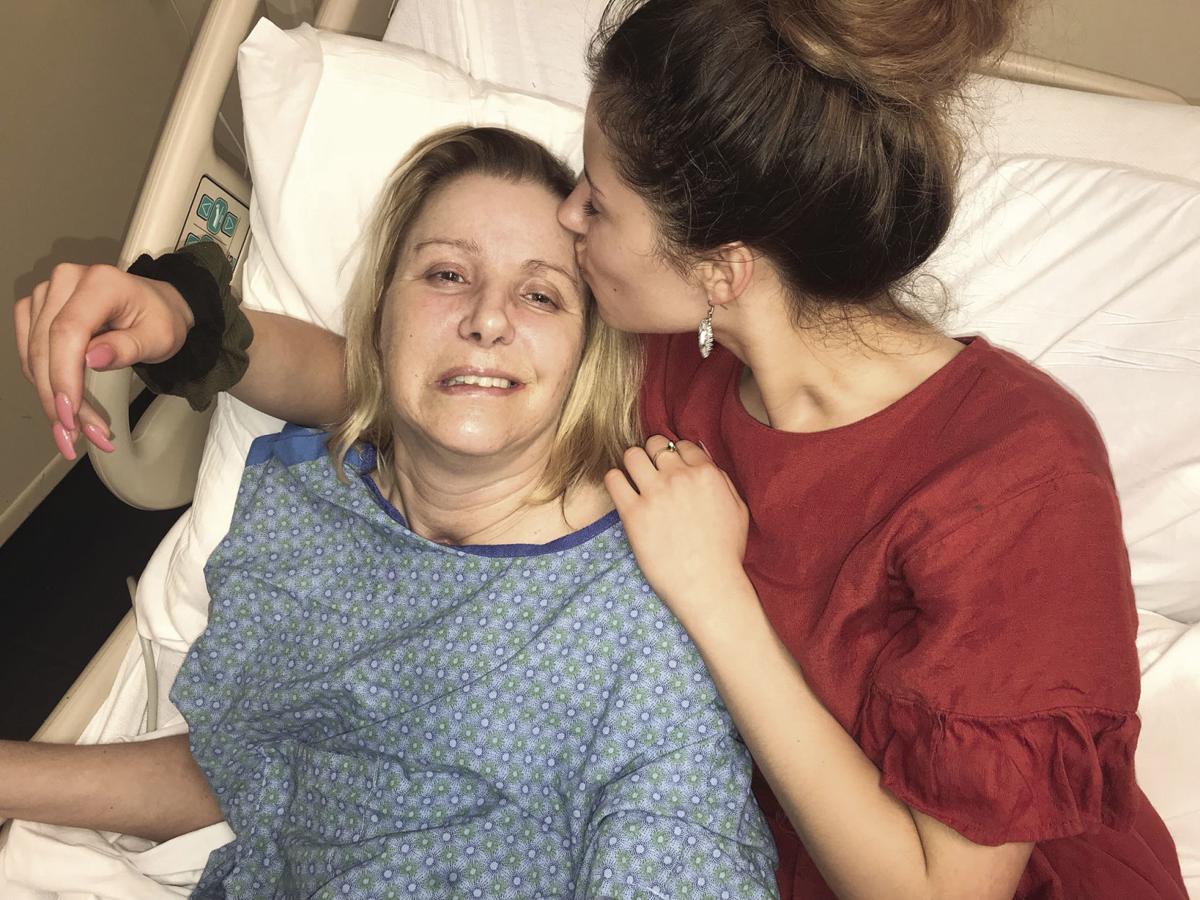 For seven months, Jasmynn Stechmann (right) advocated on behalf of her mother, Becky Walderon, who was in a coma after a fatal motorcycle accident. Doctors told Stechmann that her mother would never be able to say “I love you” again, but it was one of the many ways Walderon has proven them to be wrong. (Submitted photo) 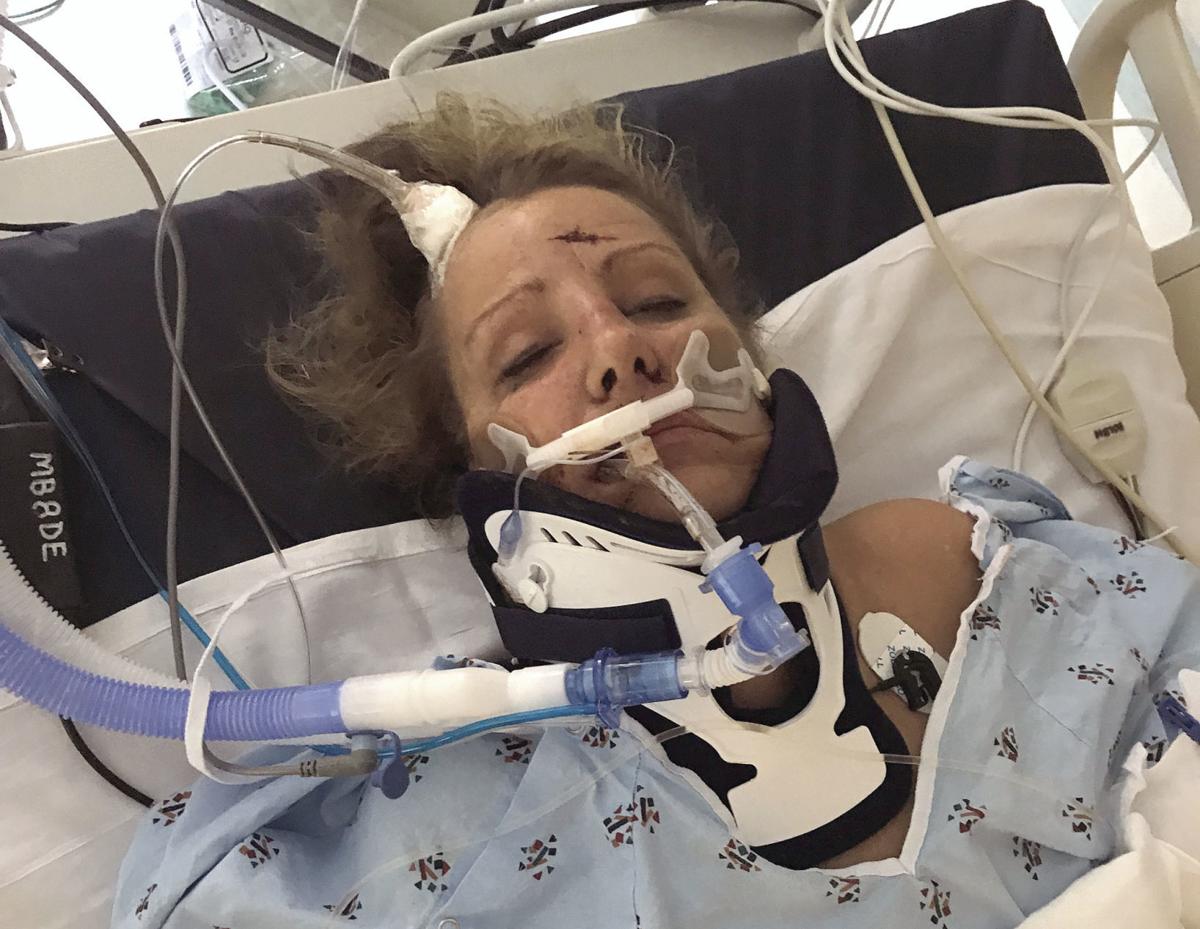 Becky Walderon of Owatonna remained in a coma for more than seven months following a motorcycle accident off Lemond Road that killed her longtime partner, B.J. Johnson, in September 2018. (Submitted photo) 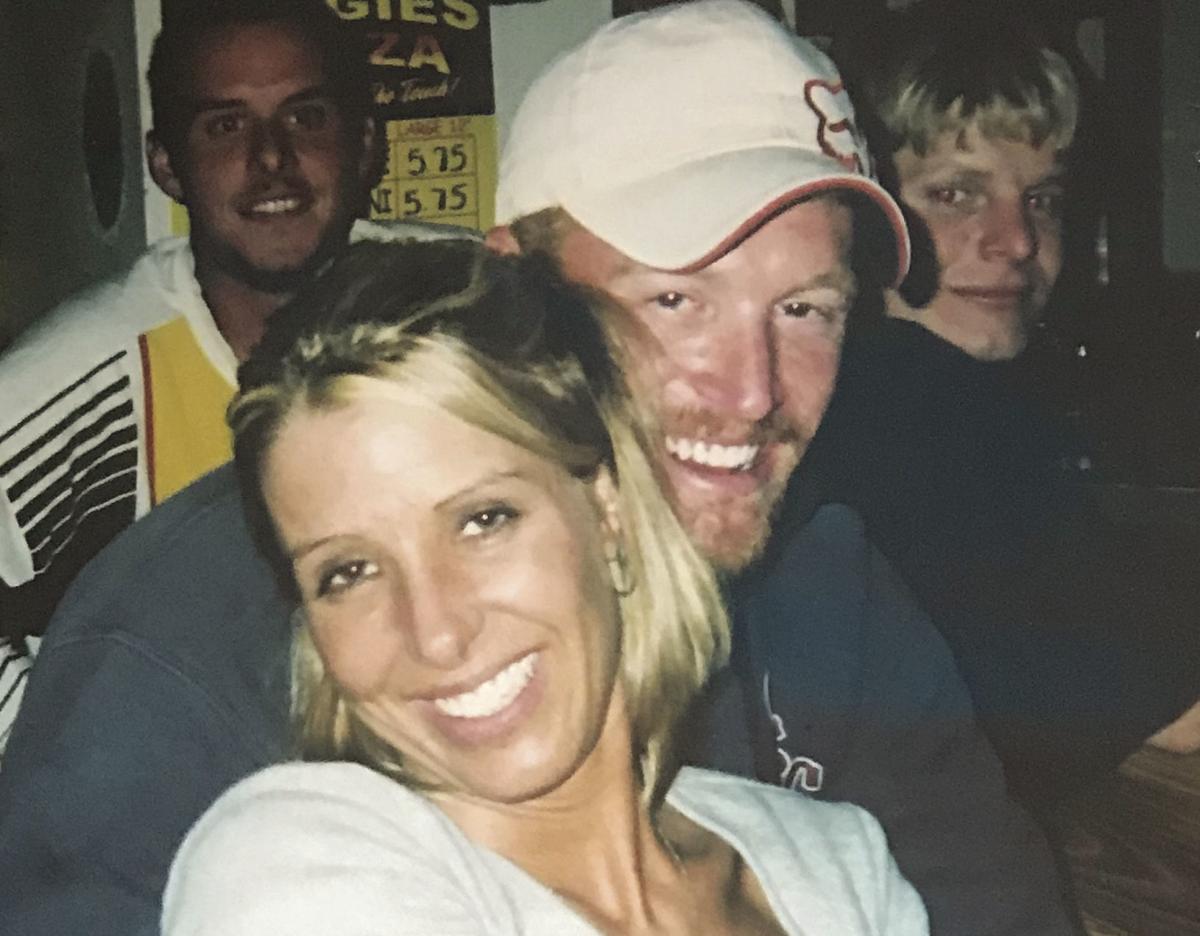 Becky Walderon and B.J. Johnson, both of Owatonna, had been together for 15 years before Johnson died in 2018. Walderon’s daughter stated that they “didn’t have to be married for it to be true love.” (Submitted photo) 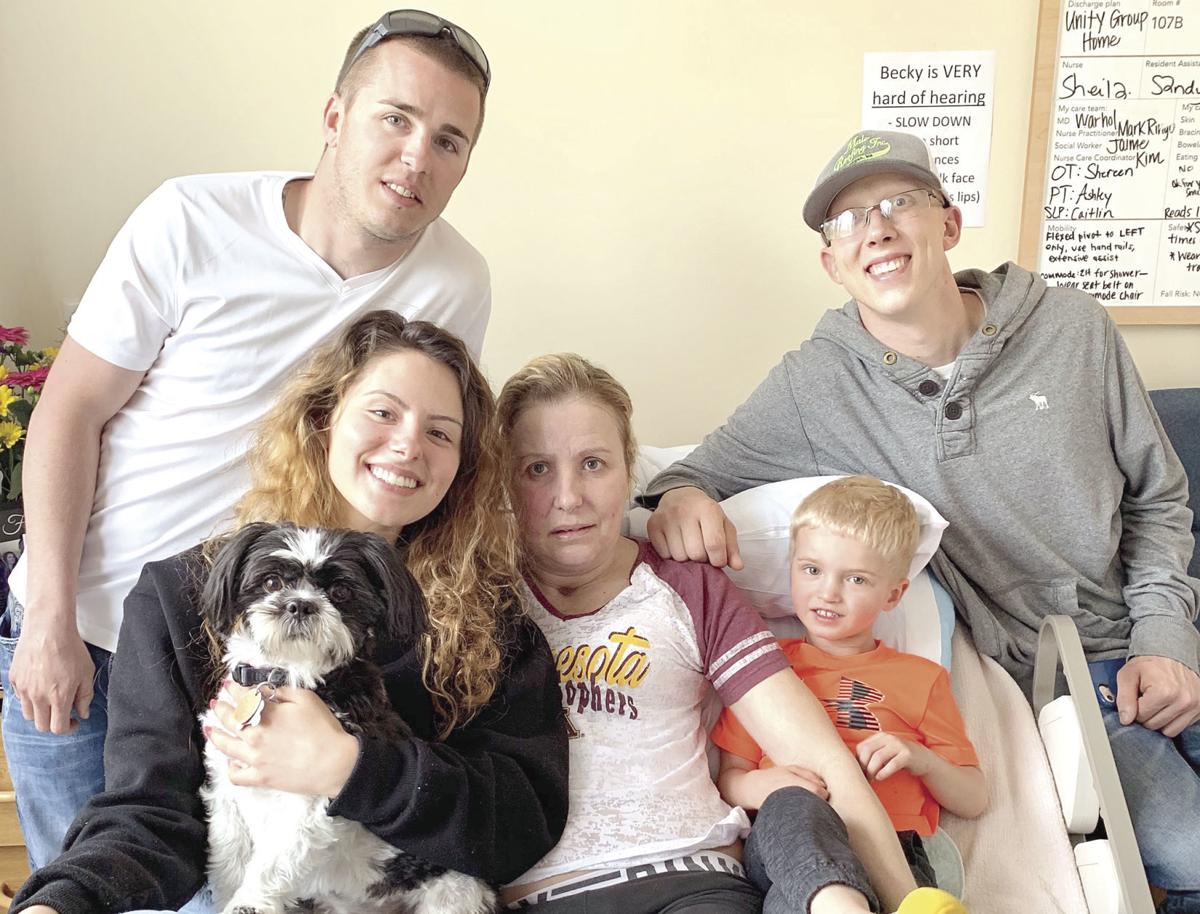 Becky Walderon (center) is still on the road to recovery with the support of her kids (clockwise from Walderon) Jasymnn Stechmann, Jacob Walderon, Jesse Stechman, and grandson Carson Stechmann. (Submitted photo)

For seven months, Jasmynn Stechmann (right) advocated on behalf of her mother, Becky Walderon, who was in a coma after a fatal motorcycle accident. Doctors told Stechmann that her mother would never be able to say “I love you” again, but it was one of the many ways Walderon has proven them to be wrong. (Submitted photo)

Becky Walderon of Owatonna remained in a coma for more than seven months following a motorcycle accident off Lemond Road that killed her longtime partner, B.J. Johnson, in September 2018. (Submitted photo)

Becky Walderon and B.J. Johnson, both of Owatonna, had been together for 15 years before Johnson died in 2018. Walderon’s daughter stated that they “didn’t have to be married for it to be true love.” (Submitted photo)

Becky Walderon (center) is still on the road to recovery with the support of her kids (clockwise from Walderon) Jasymnn Stechmann, Jacob Walderon, Jesse Stechman, and grandson Carson Stechmann. (Submitted photo)

OWATONNA — “My mother has never given up on anybody in her life. She sticks by them until the very end, no matter how little hope.”

Jasmynn Stechmann dried her eyes and forced a smile. At 19 years old, the Owatonna High School graduate is currently attending her second year at the University of Minnesota. She has her typical friends, her typical dorm room, and her typical classes.

But Stechmann has a far-from-typical life.

Last September, less than two weeks into her college career, Stechmann had her world turned upside down when her father called her in the middle of the night. There had been a bad accident involving her mother and stepfather, they were being air-lifted to Mayo in Rochester, and he was on his way up to the Cities to pick her up.

“My body processed what he was telling me before my brain did,” Stechmann said. “Before I knew what had happened, I was on the ground crying.”

After some of the shock settled, Stechmann called her grandmother, Gwen Sahf, as she waited for her father to bring her to Rochester. Sahf filled her in on her mother’s condition, insisting that everything was going to be OK, but seemed to be ignoring Stechmann’s questions about her stepfather.

“After about the fifth time, she got really quiet,” Stechmann said. “Then she told me B.J. died.”

B.J. Johnson died in the early hours of Sept. 15, 2018 — a year ago this weekend — at the age of 37. Stechmann said that he died on impact when the motorcycle he was driving went off Lemond Road in Owatonna and into a cornfield. Both he and his passenger, Becky Walderon, were thrown from the motorcycle and found by friends who had been following them in a truck. Johnson and Walderon, who is the mother of Stechmann, had been together for 15 years.

“I honestly don’t remember life without him,” Stechmann said, asserting that the couple didn’t have to be married for it to be considered true love. “He took me fishing for the first time. He taught me how to ride my bike. All my good and best memories, B.J. is in them.”

Stechmann said that she spent the entire car ride that night in silence, unsure of how to react to what was going on. All she really knew was that she was going to see her mom, uncertain of how much longer she would even be around.

“I had no expectations,” Stechmann said, trying to remember a night that seems like one long blur. “I know that when I saw her, she had a million wires attached to her. She looked like an alien experiment. I was devastated. I didn’t know what to do.”

Slowly but surely everyone in Stechmann’s family showed up at the hospital, specifically her brothers Jesse Stechmann, 29, and Jacob Walderon, 27. Eventually the doctors told them that they would wait to see if their mother would make it past 72 hours as they tried to assess her injuries.

“She was just broken,” an emotional Stechmann said. Walderon was in a coma and would remain that way for seven months.

“During her time in a coma, there were maybe three or four times where a doctor would set us down and say that we needed to let her go,” Stechmann said. “I was trying to be selfless, but I refused to give up on her. If I really thought that she would never recover or would be a vegetable for the rest of her life it would have been different. I want her to be happy and to live well. But I genuinely believed that she would get better.”

Stechmann had a beacon of hope that came in the form of Shannon Kerr, the Owatonna native who was in a coma for 89 days following an accident in Lakeville — an accident that took place on Sept. 14, almost exactly three years from Walderon and Johnson’s accident.

“She just gave me so much hope,” Stechmann said, stating that she reached out to Kerr a couple times on social media and was always met with positive words and well wishes. “This wasn’t about not being willing to let go of my mom. I was always putting her first.”

Throughout the seven months that her mom stayed in a coma, Stechmann said that Walderon wasn’t really progressing. More importantly, however, she also wasn’t dying.

“I just wouldn’t let myself think negatively,” Stechmann said. “If I started thinking that way, what would I have left to hold on to?”

Her positivity paid off, however, when Walderon woke up in April – something doctors had told Stechmann she may never do. Because of her fragile state, Stechmann had to wait another month before she could inform Walderon that Johnson had died, knowing that it would be like reopening a wound that seemed impossible to heal.

“I had eight months of grieving under my belt,” Stechmann said. “But telling her that day was like getting that phone call all over again.”

Walderon is still on a long road to recovery, battling an array of obstacles that are working hard against her. Stechmann said her mother has defied the doctors in more ways than one, from being told that she would never be able to sit up again to never being able to tell her kids she loves them.

“But she did,” Stechmann said as tears flooded her eyes. “When she told me she loved me again for the first time — that was the sweetest thing I ever heard. I bawled like a baby.”

There is a lot that is still unknown in Walderon’s recovery, including if she will ever be able to live at home again. Stechmann said that right now she needs around-the-clock care and is living in a rehab facility close to where Stechmann is going to school. There is also the never ending bills that have been piling up in what became nearly an empty household overnight.

“Living in that big empty house was so hard,” Stechmann said, noting that for a long time she was living in their Owatonna home alone until one of her brothers moved back in this summer. “I had to spend a lot of time self-reflecting, but the truth is we are all struggling.”

“But we’re struggling together,” Stechmann said with a weak smile. “I think sometimes grief can be a gift.”

Through the roller coaster that has been Walderon’s recovery, Stechmann said that missing remembering B.J. has helped get her through some of her toughest days. She describes him as a happy guy who could make friends with anybody, making his absence all that much more noticeable everywhere she goes.

“He was a big, hard Harley guy with a giant, soft heart,” Stechmann laughed. “He didn’t care who you were or where you came from. He would accept and love you.”

Stechmann said that moving forward she has been carrying around “B.J.’s Lessons for Life” that she complied to help her carry on his legacy. The lessons include to be a “fun” adult, to be genuine, to be a free spirit, and to be accepting of everyone.

“This has been a really traumatic time in my life,” Stechmann said. “But I don’t want to hide it from the public. We have been through a lot, but I am hoping we can inspire others to keep moving forward, too.”

For those interested, a GoFundMe has been set up to help Becky Walderon’s family pay for a variety of bills and can be found at gofundme.com/f/rebeccawalderon.