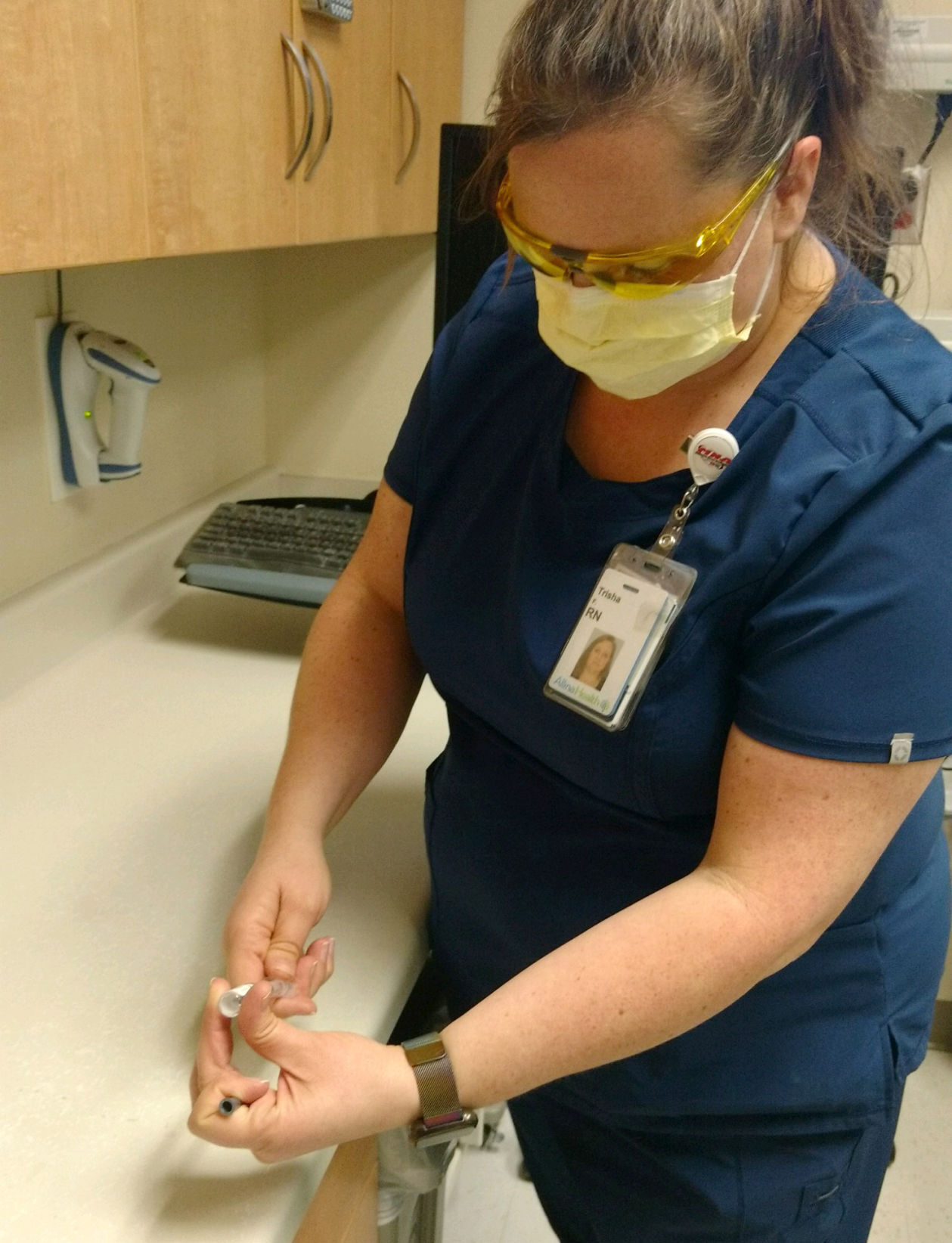 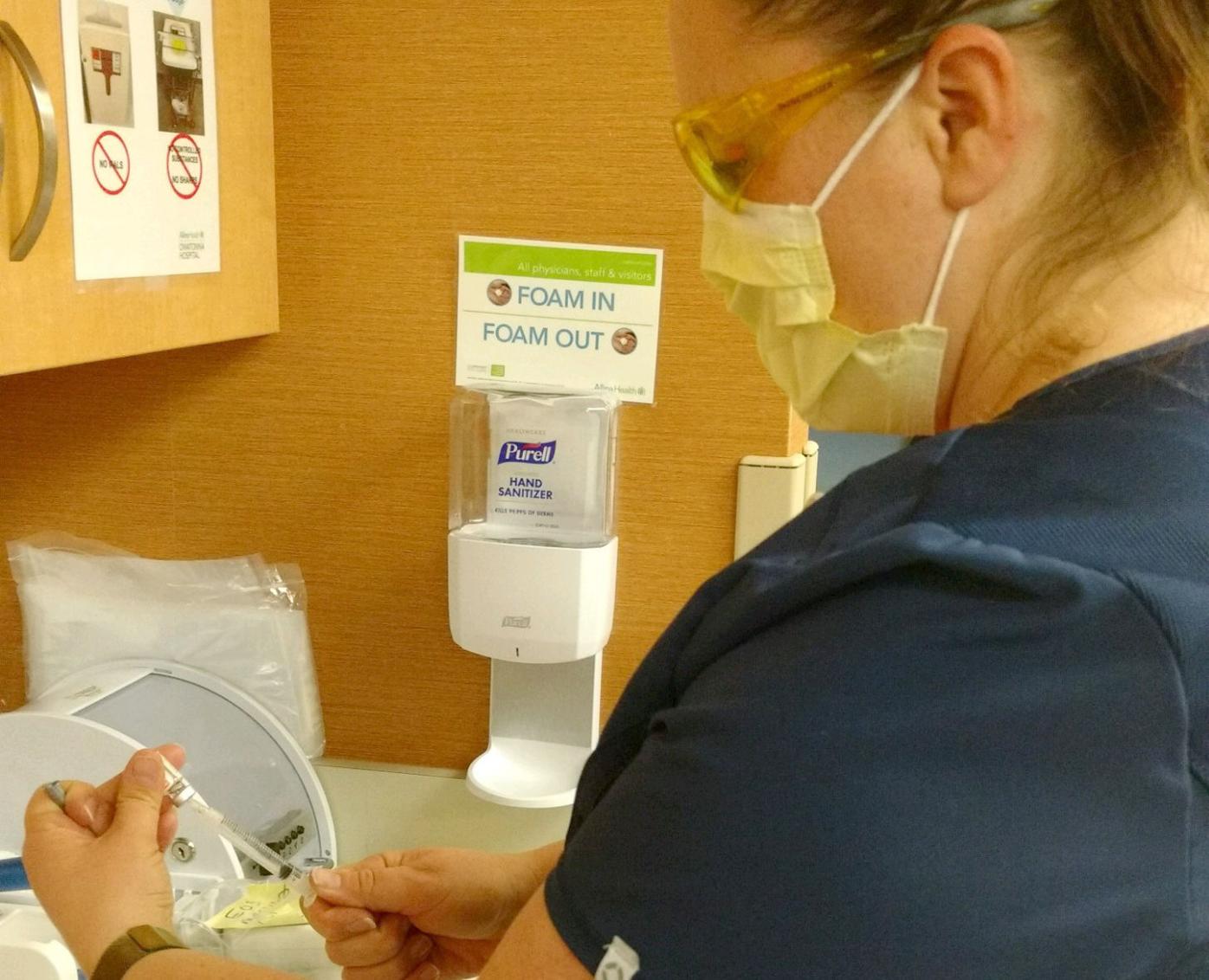 Every day in the ER is different, and ER nurses must be able to adapt and respond to new situations at a moment’s notice. Pictured, Trisha Foster-Erickson draws medicine out of a vial into the syringe. One of many tasks she performs each shift. (Photo courtesy of Owatonna Hospital Emergency Department) 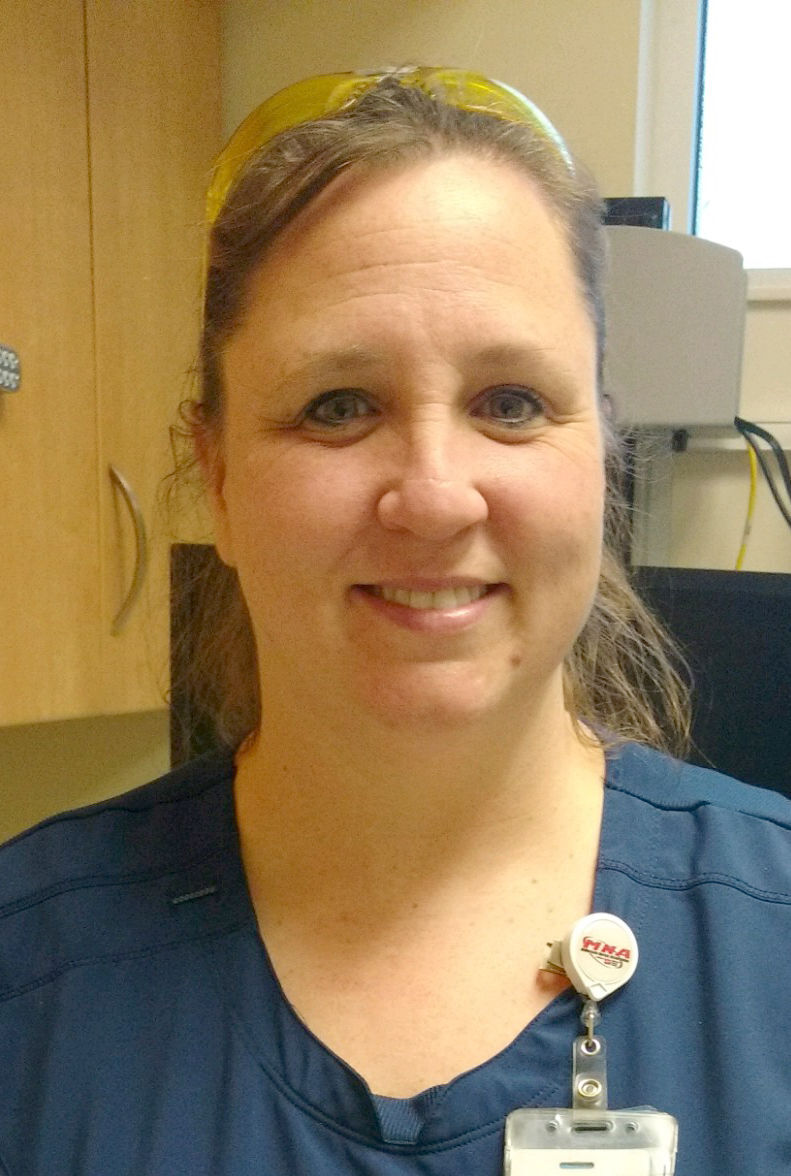 Every day in the ER is different, and ER nurses must be able to adapt and respond to new situations at a moment’s notice. Pictured, Trisha Foster-Erickson draws medicine out of a vial into the syringe. One of many tasks she performs each shift. (Photo courtesy of Owatonna Hospital Emergency Department)

Nurses were challenged to adapt to the fast-moving changes and develop new routines in order to ensure the safety of themselves, colleagues and patients. Foster-Erickson said at the beginning of the pandemic, protocols were changing at least twice a day. Used to how things were operating for one shift, by the time she would arrive for her next shift, things were already different. Though the road was rocky at times, Foster-Erickson felt as if her coworkers were successful in communicating and updating each other.

"I'm sure the communication definitely improved with all of the changes," said Foster-Erickson. "We all figured it out and helped one another."

Communication was not only important among coworkers, there was also an added importance of communication with patients, especially given the barriers created with mask wearing. Foster-Erickson said it was difficult being able to hear patients at times with the masks and shields on. Early on, she recalls how difficult it must have been for hearing-impaired patients who depend on reading lips to communicate with others. As someone without hearing problems, Foster-Erickson even found herself struggling to understand others at times. Despite the challenges, Foster-Erickson said it helped her team communicate with one another and learn to enunciate more efficiently.

"The biggest part of nursing is communicating and listening," Foster-Erickson added.

The extra personal protective equipment (PPE) medical personnel were required to wear also created some barriers when it came to assisting patients. Putting on and taking off PPE numerous times a day helped them be more aware of their surroundings and prevent contamination. Each time hospital personnel entered and exited a patient's room, a new gown and gloves were put on. Foster-Erickson said the rule of thumb is that they do not touch their mask, and face shields are taken off and cleaned after seeing every patient. One person was dedicated to ensuring no one accidentally contaminated another space. Foster-Erickson said it was surprising how quickly they could possibly break isolation without realizing it. Though they've always been apt to clean and sterilize spaces, even more cleaning measures were put in place for all areas of the Hospital, from the front desk, waiting room and patients rooms.

"We really focused on different areas and got really fast at putting PPE on and off," said Foster-Erickson. "It became a memory thing and with teamwork, we were reminded of this or that and I think that was all helpful."

As an ER nurse, the position takes on many roles. Foster-Erickson said sometimes she is on triage (the sorting of patients according to the urgency of their need for care) if it's busy, otherwise she typically tends to a patient and figures out what's going on. Once they are settled, their vitals are taken and stabilized if needed until the doctor comes in to evaluate, order tests and figure out what the problem is.

Since the pandemic began, Foster-Erickson said her roles as an ER nurse were still the same, but many other things in the ER have changed, like the way personnel communicate with one another and how the rooms are setup.

The flow of how personnel go into patients' rooms changed, as some stand outside of the room to hand particular items to one another to prevent one person repeatedly having to take PPE off and on. Foster-Erickson said they all work together as a team, especially since they cannot do one thing without the other. There was a constant learning curve for personnel as well, as different pieces of personal PPE were required and other items needed to be cleaned at different times. In the mornings, Foster-Erickson said the hospital's infectious disease team met with personnel to discuss the new changes and what they had to do to stay safe.

One notable change Foster-Erickson recalled was in times where a code was called  (when a team of providers, sometimes called a code team, rush to the specific location and begin immediate resuscitative efforts). Before the pandemic, all personnel were in the room, now only the designated personnel are inside the room and the rest of the team is outside to hand/receive items to those working inside to prevent contamination. The rooms were also set up differently when COVID numbers were really high last year. Personnel kept as few items exposed in rooms as possible, since everything had to be cleaned each time patients were moved in. Extra supplies were closed in cupboards inside the rooms so they wouldn't become contaminated. Foster-Erickson said she learned to think ahead and tried to grab as much stuff as she thought the patient would possibly need based on their symptoms. At first, she said it took a bit to remember the new location of certain items.

Changing visitor policies also led to another quality Foster-Erickson found strength in. Though it went back and forth throughout the course of the pandemic, there were times patients could not have visitors with them in their rooms. When the COVID numbers were high, they tried to keep as many people out of the ER as possible so there's less chance of getting COVID or having it spread. Foster-Erickson found that to be difficult for patients, because when people are in hospitals, it's often quite scary for them.

"Their support is their family, so we as nurses had to try to keep them in the loop," said Foster-Erickson. "During busy times it was hard to keep [families] in the loop, but that was another piece that made me stronger."

Foster-Erickson said she focused on getting to patients' families as quickly as she could. If patients were COVID positive, they were not allowed to have any visitors. Some exceptions to the no-visitor policy were those who were actively dying or in palliative care, where one visitor was allowed so they wouldn't be alone, except for those with COVID positive cases. Her department didn't deal with COVID positive deaths as much, because once the patients were stabilized, they were taken to a different area of the hospital for care. Foster-Erickson said the visitor policy changed about six times in that timeframe. Being able to communicate with patients and families and trying to keep everyone in the loop were some things that made her a stronger nurse.

At the beginning of the pandemic, Foster-Erickson said the ER was a ghost town and it seemed as if no one wanted to come to the hospital. It was either really busy or really slow. Foster-Erickson believes it's more balanced now, but she still experiences waves of both. She chalks some of those changes up to other facilities changing their policies, leaving those unable to go to same-day clinics going to the ER to receive care. Oftentimes, people would wait because they were afraid to get COVID, even though they should've came in weeks before.

"We definitely picked up how often we clean waiting rooms, we always did, but registration staff at the front ended up cleaning a lot more," said Foster-Erickson. "Housekeeping also goes through a lot more. We all stepped up to play our roles as a team, everything changed in a hurry."

The Owatonna Hospital emergency room is a Level IV Trauma Center. This designation verifies staff have the expertise and resources to provide a high level of 24/7 emergency care.

Mental health assessment and referral services are provided 24/7 in the Owatonna Hospital ER, and the hospital is designated stroke ready by the state of Minnesota, meaning it is prepared to evaluate, stabilize and provide life-saving emergency treatment to patients who exhibit symptoms of stroke.