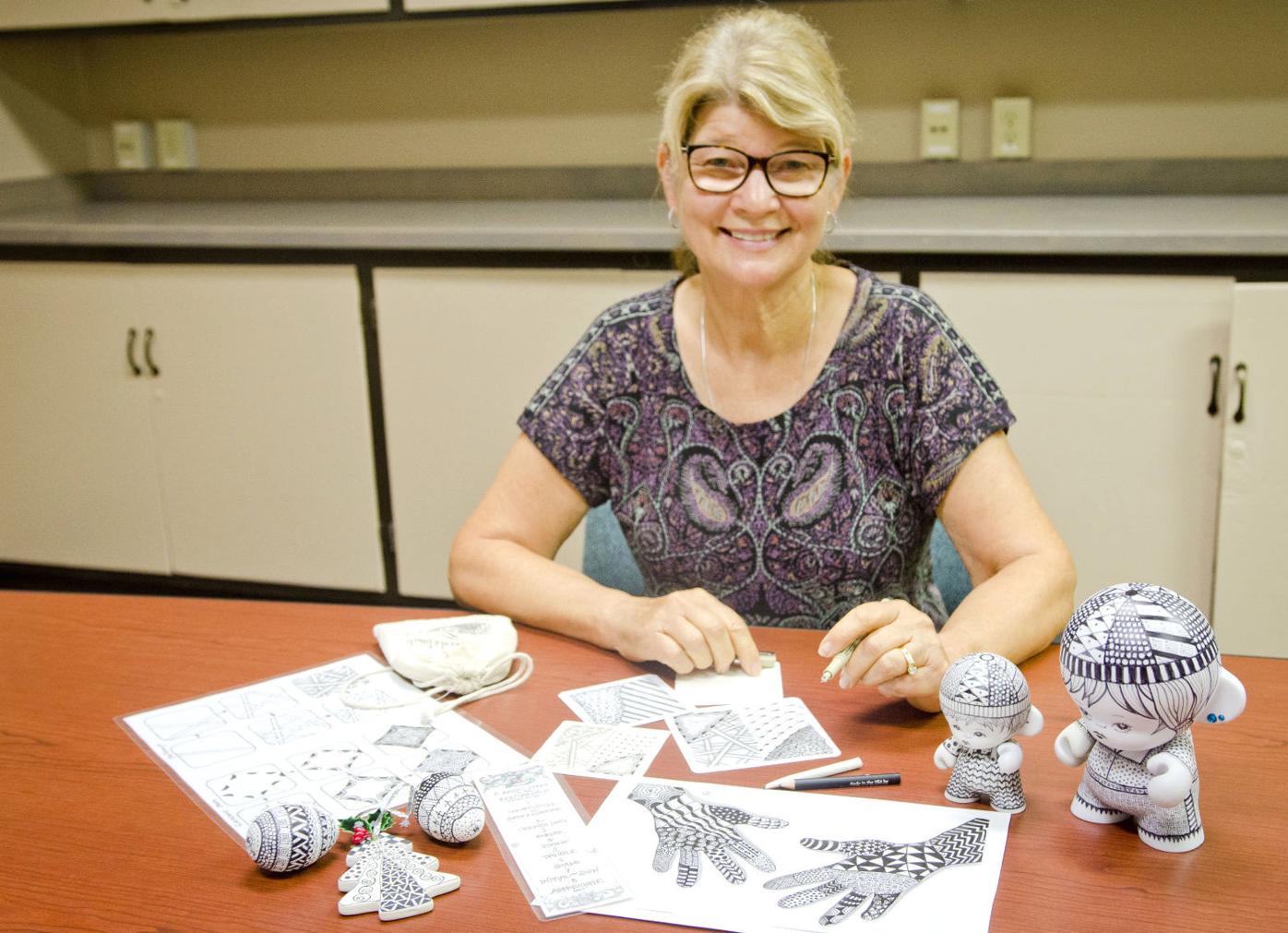 Ruth Murray, of Faribault, developed an interest in the Zentangle Method about 15 years ago. She has since began tangling on 3D objects, as pictured. Murray plans to teach a Zentangle class at the Paradise Center for the Arts Aug. 3-4. (Michelle Vlasak/southernminn.com) 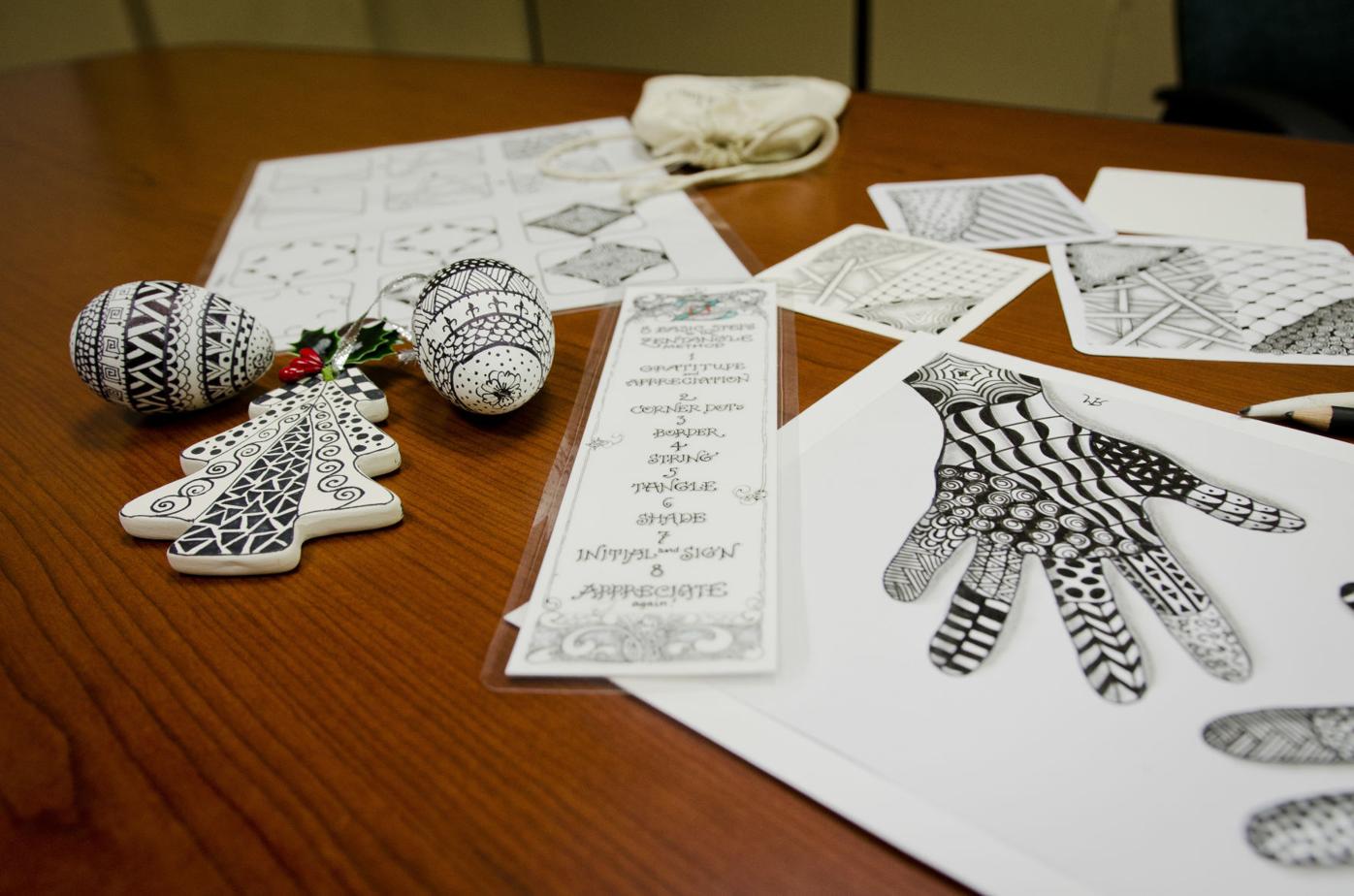 Zentangle founders state creators will develop a deeper understanding, get more out of their practice, discover fun new ideas and projects and connect with more of the Zentangle community as they learn more about it. Over the years founds say they’ve created a Zentangle history of ideas and inspiration through their blog, newsletters and videos. (Michelle Vlasak/southernminn.com)

When it comes to Zentangle, founders Maria Thomas and Rick Roberts say “Anything is possible, one stroke at a time.”

In the early 2000’s the Rhode Island duo developed the Zentangle Method, known as an easy-to-learn, relaxing and fun way to create beautiful images by drawing structured patterns. Faribault resident Ruth Murray picked up on the meditative art form several years ago, officially becoming a certified Zentangle teacher in 2017.

Next month, Murray plans to teach two classes at the Paradise Center for the Arts. Though this will mark her first time teaching a class at the Paradise, in previous years, Murray has taught friends and family members alike. She had high hopes to branch out into offering classes to others last year, but the COVID-19 pandemic put a damper on that.

During the pandemic, Murray was pleased to be able to go to her room and draw some tangles. The Zentangle website states tangles are made with combinations of dots, lines, simple curves, S-curves and orbs. Those patterns are drawn on small pieces of paper called “tiles” and can be assembled into mosaics once complete.

The ceremony of the Zentangle Method has eight steps, with the first being gratitude. Murray explains taking the time to think of something she is grateful for puts her in a positive state of mind, ready to begin tangling.

Next, tanglers draw dots in the four corners of the tile, then create a border by connecting the four dots.

A zigzag, wavy or straight-lined design is then drawn on the tile to separate the different tangle sections. The tangling then begins by following patterns developed/provided by Thomas and Roberts.

Each technique has a different name, though the name doesn’t necessarily describe what the end result will look like.

Murray says the idea behind that was to keep tanglers’ minds open and not focus on making the tile look a certain way. Shading is completed with a pencil and tortillon (a paper tool used to blend in pencil into the paper). Once finished tangling, creators move into the seventh step: initialing and signing. The final step asks them to appreciate their work, and if in a class with others, this step also encourages creators to place their tiles next to one another and appreciate them together.

Murray says this also helps build a sense of community, something she feels can be done best in person. That is just one of many benefits Murray has found in her years of tangling. Some other benefits are increased relaxation, a kickstart to creativity, improved confidence, focus, empowerment, inspiration and increased awareness of patterns seen on a daily basis.

She also enjoys the unplugged aspect of the process, as it only requires a pencil, a tortillon, a tile and Zentangle patterns to follow.

The beauty of Zentangle, Murray says is that there is no right or wrong way and no mistakes can be made.

“It is approachable for someone who has never picked up an art tool. Yet Zentangle is still inspiring enough for an advanced artist,” said Murray.

Previously dabbling in the painting world, Murray enjoys the accessibility with Zentangle, since is doesn’t require a lot of supplies and can fill a lot of spare time while doing things like waiting at a doctors appointment or while getting a hair cut.

She’s explored tangling on different colored tiles like white, brown, gray and black. After mastering the techniques, colored markers are introduced, something Murray particular enjoys drawing flowers with. She’s even incorporated some tangles into 3D objects like on plastic, white figurines, Easter eggs and Christmas ornaments.

Sign up for Ruth Murray's Zentangle class at the Paradise Center for the Arts by emailing info@paradisecenterforthearts.org. Classes will be held from 1:30 to 3:30 p.m. Aug. 3-4. Cost is $24 for PCA members and $30 for non-members, plus the supply fee at $6. Murray plans to hold more Zentangle classes in the fall.

Learn more about the Zentangle Method at zentangle.com.

After the Zentangle Method of drawing was developed, Rick and Maria played with words that rhymed with "tangle," when one of them said “Zentangle.”

They did an online search for “Zentangle” and found no one was using it. They reserved zentangle.com and began the process to register the new name.

Rick meditated for years, although contrary to reports, he never practiced Zen or Zen Buddhism. But they do have fun saying, “He’s Zen and she’s tangle.”

Interesting side note: When Maria and Rick first began "dating" one of their primary topics of conversation was geometry, specifically sacred geometry or the topic of Fibonacci proportions and patterns. Maria was using them in her art and design work and Rick was using them in analyzing the price movements of companies and commodities. This was a forecast of the aspect of Zentangle art which mirrors the geometric and fractal nature of the patterns found throughout creation.