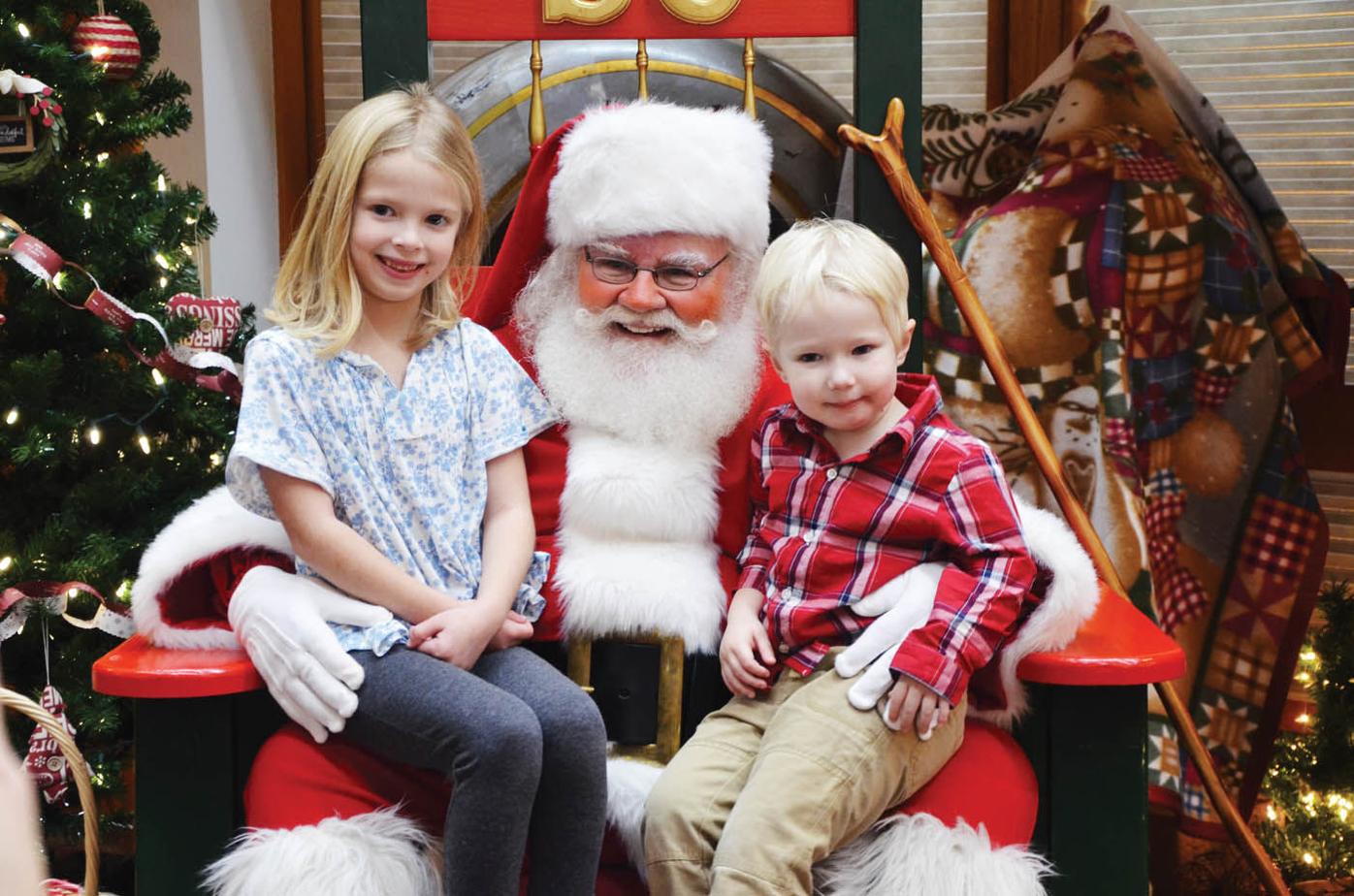 Siblings Claudia and Landon Miller sit on Santa’s lap for a photo at Farmers and Merchants State Bank during the 2016 Holiday Dazzle. The annual Blooming Prairie celebration will return this Friday for an evening of family fun and games downtown. (Press file photo) 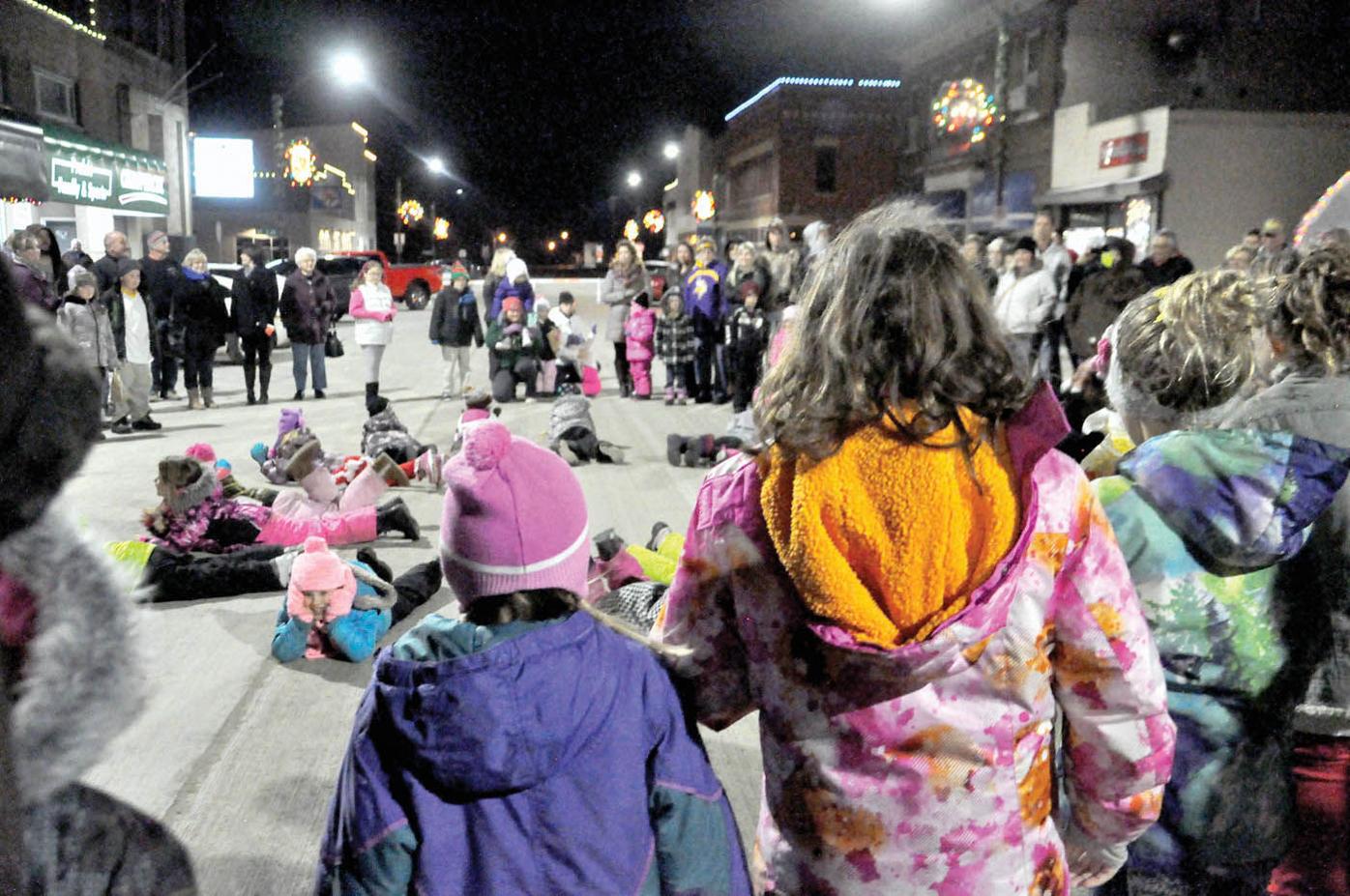 Blooming Prairie’s Just For Kix dancers perform in the middle of Main Street during the 2015 Holiday Dazzle,an annual celebration that will return to town this Friday evening. (Press file photo)

Siblings Claudia and Landon Miller sit on Santa’s lap for a photo at Farmers and Merchants State Bank during the 2016 Holiday Dazzle. The annual Blooming Prairie celebration will return this Friday for an evening of family fun and games downtown. (Press file photo)

Blooming Prairie’s Just For Kix dancers perform in the middle of Main Street during the 2015 Holiday Dazzle,an annual celebration that will return to town this Friday evening. (Press file photo)

BLOOMING PRAIRIE — With snow on the ground and a slight chill in the air, it’s once again time for Blooming Prairie’s annual Holiday Dazzle. This Friday, downtown businesses will be offering a number of special promotions and, in the evening, a full slate of activities for adults and kids.

In addition to daytime deals, Blooming Prairie’s younger residents can pick out presents for parents and family members from 2 to 5 p.m. with help from the city’s Women of Today chapter. According to Becky Noble, director of the Blooming Prairie Chamber of Commerce, the group will be at the community center in the afternoon and can guide kids through an inexpensive, pop-up gift shop while family members wait outside. The Blooming Prairie Public Library will be hosting an open house during the same timeframe.

Wagon rides will kick the evening celebration off at 5 p.m., with the inaugural carriage bringing Santa Claus to his post at Farmers and Merchants State Bank. Saint Nick will be hanging around until 7 p.m., taking complementary photos with kids who can then pick up a handmade frame for their picture. Cookies and other refreshments will also be available at the bank and elsewhere throughout downtown, free of charge for the festivities.

Noble said the longtime tradition is an opportunity to get residents into downtown to celebrate together and also possibly shop at some of the city’s local businesses. “It’s our kick-off to the holidays, and we hope that [residents] take advantage of it,” she said.

Later in the night, there will be a couple games where residents can try their hands at winning Blooming Prairie bucks — good at any Blooming Prairie business, according to Noble — and a variety of other prizes. At 6 p.m., it will be time for the event’s annual snowball toss. Residents can purchase spaces on a 100-square board for $5 each.

“We’ll throw out snowballs and if the colored snowballs land on your number, you’ll win $50 or $100 Blooming Prairie bucks,” explained Noble. A half hour later along Main Street, there’ll be a wooden nickel toss tournament for both adults and kids — separating the competition into two divisions by age being a new thing this year.

“We flip it again until it’s down to one person,” said Noble, with the last player left standing being named the nickel toss winner.

The victor in the annual Scrooge competition will also be announced at 5:30 p.m. Residents can vote on the four contestants — Jason Vorlicek, Kenny Behnken, Nelda Haberman and Terri Zwiener — now through the day of the festival by dropping coins in each person’s jar at a number of downtown spots.

“We’ve had those jars out for almost a month, and all the proceeds go to our Christmas light fund,” said Noble, explaining that the money goes toward decorating downtown. “Last year, we had to replace all the bulbs in the lights.”

Noble said jars for each candidate are currently set up at the grocery store, hardware store, Prairie Home, the Pizza Cellar and J & H Liquors. Thinking about this year’s candidates, Noble joked that they would all make for good Scrooges. In this case, she added, “They’re happy to be a Scrooge.”

Throughout the course of the evening, Noble said people will also be passing out paper snowballs at random. These will each have a number on it and attendees can gather in the middle of Main Street at 7 p.m. to hear which numbers are called, with winners getting Blooming Prairie bucks.

In addition to the yearly games and activities, Noble noted that her favorite part of the Holiday Dazzle is just seeing all the young faces downtown.

“They might have to stand in line to see Santa, but they don’t care. They love to be there. We also have some high school kids that come around and sing and play their instruments,” said Noble. “The fire department will have a fire truck, the police truck and ambulance will be there and kids love to poke their heads in those vehicles.”

Apart from being an opportunity to gather as a community, Noble added that the celebration was a way to get residents downtown and interacting with local businesses.

“They need our support, so we try to get people in town to see what they have to offer,” she explained.

Heading into the season, Noble said she hoped residents would treat every day like Small Business Saturday — an initiative that encouraged people to shop small on Nov. 30 — as they go around picking up presents.