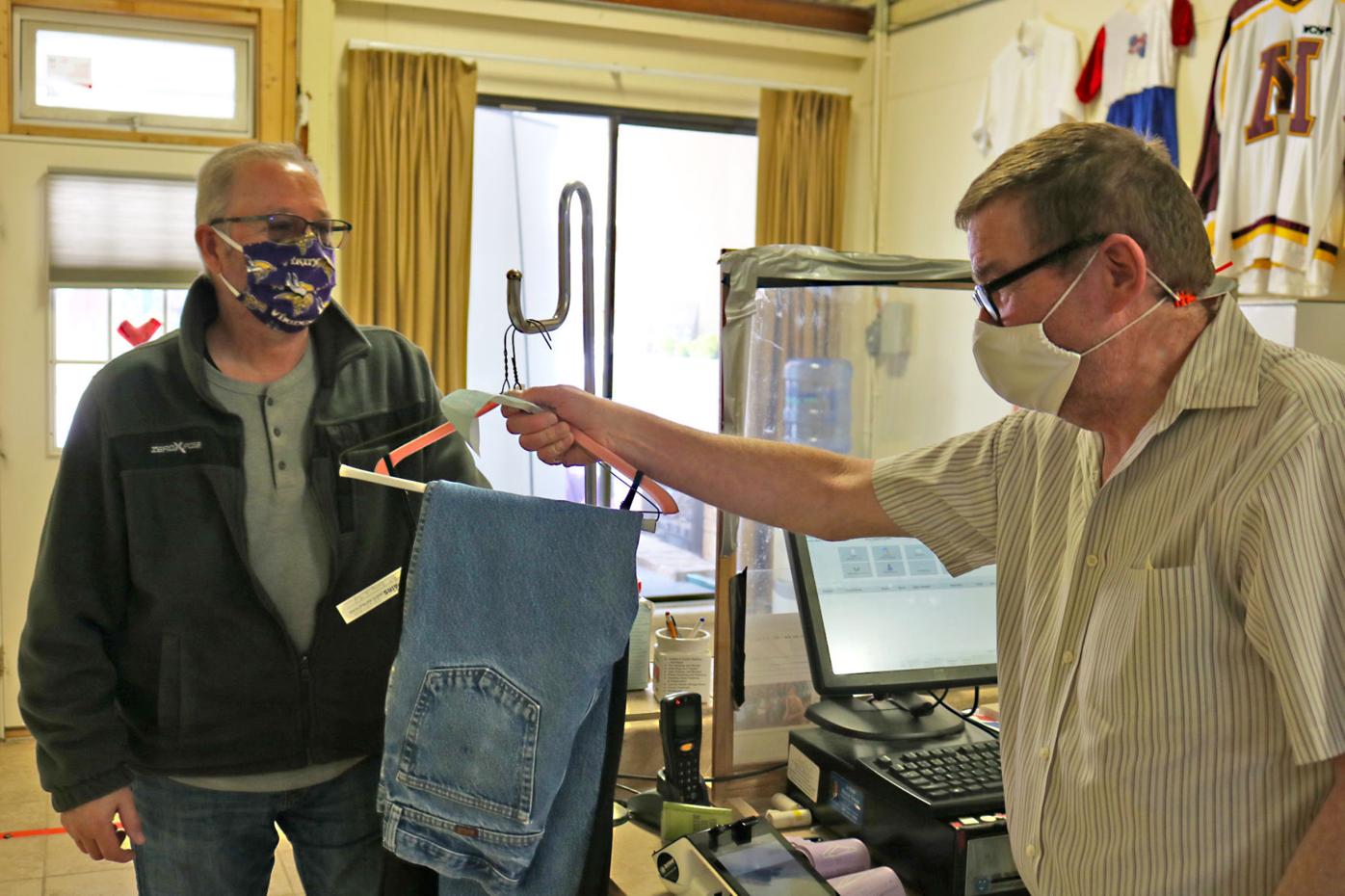 Mark Maisio (right) helps a customer at his downtown Owatonna dry cleaning business, Elwood Star Cleaners. The 65-year-old business was rocked by the COVID-19 pandemic as a majority of people transitioned to work-from-home settings. (Annie Granlund/southernminn.com) 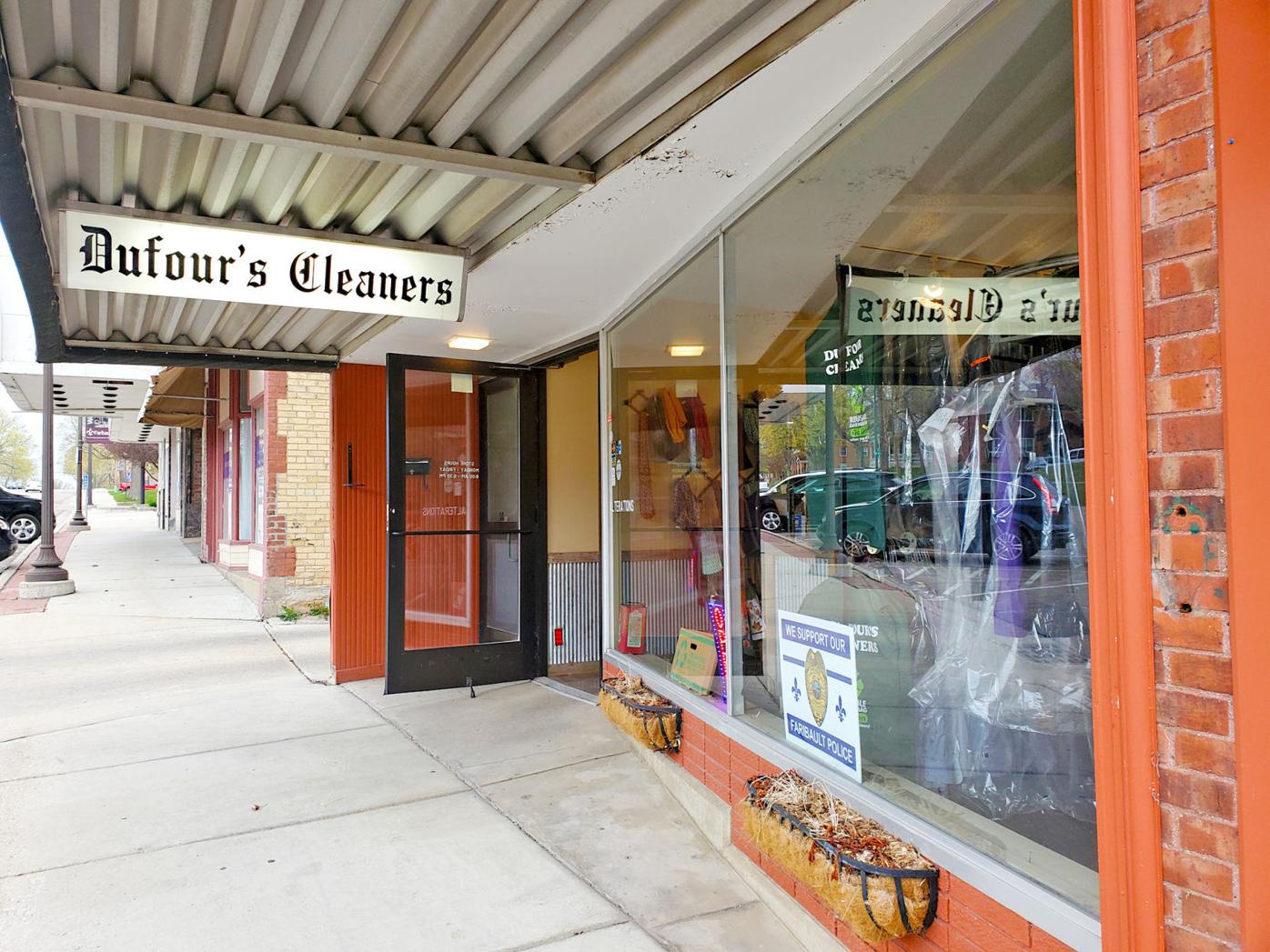 DuFour Cleaners in Faribault saw a 75% drop in business in 2020, but owner Kelly Wefel said he remained optimistic they would “weather the storm” as their commercial contracts remained strong throughout the pandemic. (Michelle Vlasak/southernminn.com)

Mark Maisio (right) helps a customer at his downtown Owatonna dry cleaning business, Elwood Star Cleaners. The 65-year-old business was rocked by the COVID-19 pandemic as a majority of people transitioned to work-from-home settings. (Annie Granlund/southernminn.com)

DuFour Cleaners in Faribault saw a 75% drop in business in 2020, but owner Kelly Wefel said he remained optimistic they would “weather the storm” as their commercial contracts remained strong throughout the pandemic. (Michelle Vlasak/southernminn.com)

It is one of those businesses that many people take for granted, sometimes not even realizing when they are gone.

Mark Maisio, co-owner of Elwood Star Cleaners in Owatonna with his wife Lana, said they still get customers from Waseca wandering into their store stating they didn’t realize their own local dry cleaner had closed up shop.

“That was five years ago,” said Maisio, who has owned his dry cleaning business for 15 years. “But that’s the problem; if people don’t bring in their items, dry cleaners are going to close.”

Today, Maisio is happy to see customers continually flow in and out of his downtown business, dropping off or picking up their laundry and catching up with one another. A year ago, however, the Maisios admit that they weren’t in such a good place as the COVID-19 pandemic effectively shut down various areas of Minnesota and transitioned most of the local workforce into a work-from-home setting.

“Our sales last year were down $73,000 compared to 2019, which I would consider an average year for us,” said Lana Maisio, who handles the financial side of the business. She added that it is fair to say that a large part of their clientele comes from Federated Insurance, which has a business professional dress code for most all of their employees – the same employees that began working from home for an extended period of time.

“A lot of the big boys at Federated brought everything they had in to get cleaned just to keep us going,” Mark Maisio said. “We were really fortunate for that, but it was still a struggle. Most days I was here by myself because that’s how little of work needed to be done.”

Elwood Star Cleaners was far from alone in the lack of business during the pandemic. In Faribault, Kelly Wefel, who has owned DuFour Cleaners for 34 years, said they too saw a 75% drop in business in 2020.

“We’ve been in business a long time so we knew we would weather the storm,” Wefel said. “But it was hard. Everybody was staying home, there were no functions going on so no one was getting dressed up.”

The impact on the dry cleaning business was felt around the nation due to the pandemic and the push to have workers set up in their homes to reduce the risk of spreading COVID-19. According to the Minnesota Dry Cleaners Association, roughly 100 dry cleaners in the state have gone out of business. The National Cleaners Association reported in December that one in six dry cleaners had closed their doors or gone bankrupt in the United States in 2020.

While both Wefel and the Maisios feel optimistic that they will not have to close their doors due to the pandemic, they admit there are still obstacles in their future. An annual dry cleaner fee in the state requires dry cleaning facilities to register and pay a fee based on the facilities’ full-time equivalence rate each October. The rate is determined by the total hours worked by employees, owners, partners and any others at the facility from July 1 of the previous year through June 30 of the current year divided by 2,000, according to the Minnesota Department of Revenue. Wefel said that in talking with local legislators there is hope that this fee could be going away in the near future, but there has not been a lot of additional information on that front as of late.

The Maisios have been vocal about their concerns with the upcoming downtown streetscape project in Owatonna, which will make their location on North Cedar Avenue a construction zone this summer and eventually eliminate the diagonal parking directly outside their storefront. Though there are numerous public parking areas in the downtown district, Mark Maisio said it is “ludicrous” to believe that someone will walk two blocks with a giant bag of laundry.

“We have guys who drop off 50 shirts a pop,” Maisio said.

Lana Maisio said she is also concerned about their elderly customers who depend on convenient parking.

“The city is going to eliminate an entire customer base, and it’s the older people who truly recognize the importance of their downtown,” she said.

Both the Maisios and Wefel said they hope their respective communities continue to see the value in their businesses – specifically because they provide the only on-site dry cleaning services in their areas. Though there are a handful of other places in both towns where people can bring in their dry cleaning, those locations send out the cleaning to be done in Mankato, St. Cloud, or the metro area.

“We can do same day or next day service for a fee, but normally it’s a two-day turnaround,” Lana Maisio said. “Bigger items we always have back to the customers within one week.”

Wefel said his small town business not only services his small town of Faribault, but also the other surrounding small towns such as New Prague, Montgomery, Morristown and Medford. The Maisios also see Medford business as well as customers from Waseca and rural Steele County.

Aside from suits and formalwear, dry cleaners also provide alterations, zipper repairs, pillow and blanket cleaning, pressing, and a variety of other services some people may not be aware of. The Maisios also provide leather treatment and service “rugs and Uggs.” Wefel said commercial business is also an important side of the dry cleaning industry, a side that actually was up during the last year.

In Owatonna, the Maisios said they are just thankful to have the customer base they have and continue to be grateful as they see familiar faces return to their store.

“We are very fortunate to have the customers we have,” Lana Maisio said. “What we need now is for the government – on every level – to make wise decisions that help small business like us.”

"If people don't bring in their items, dry cleaners are going to close."