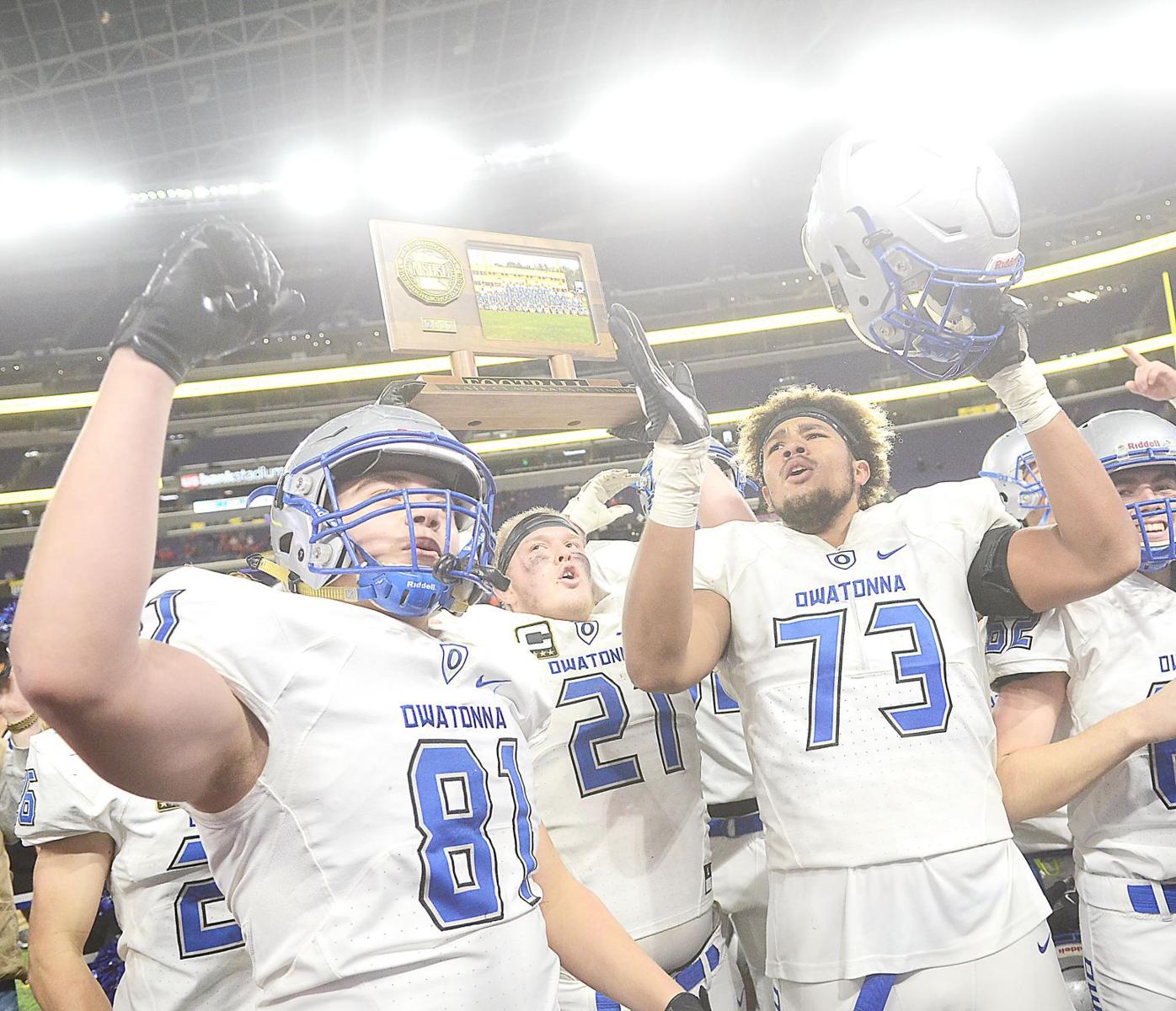 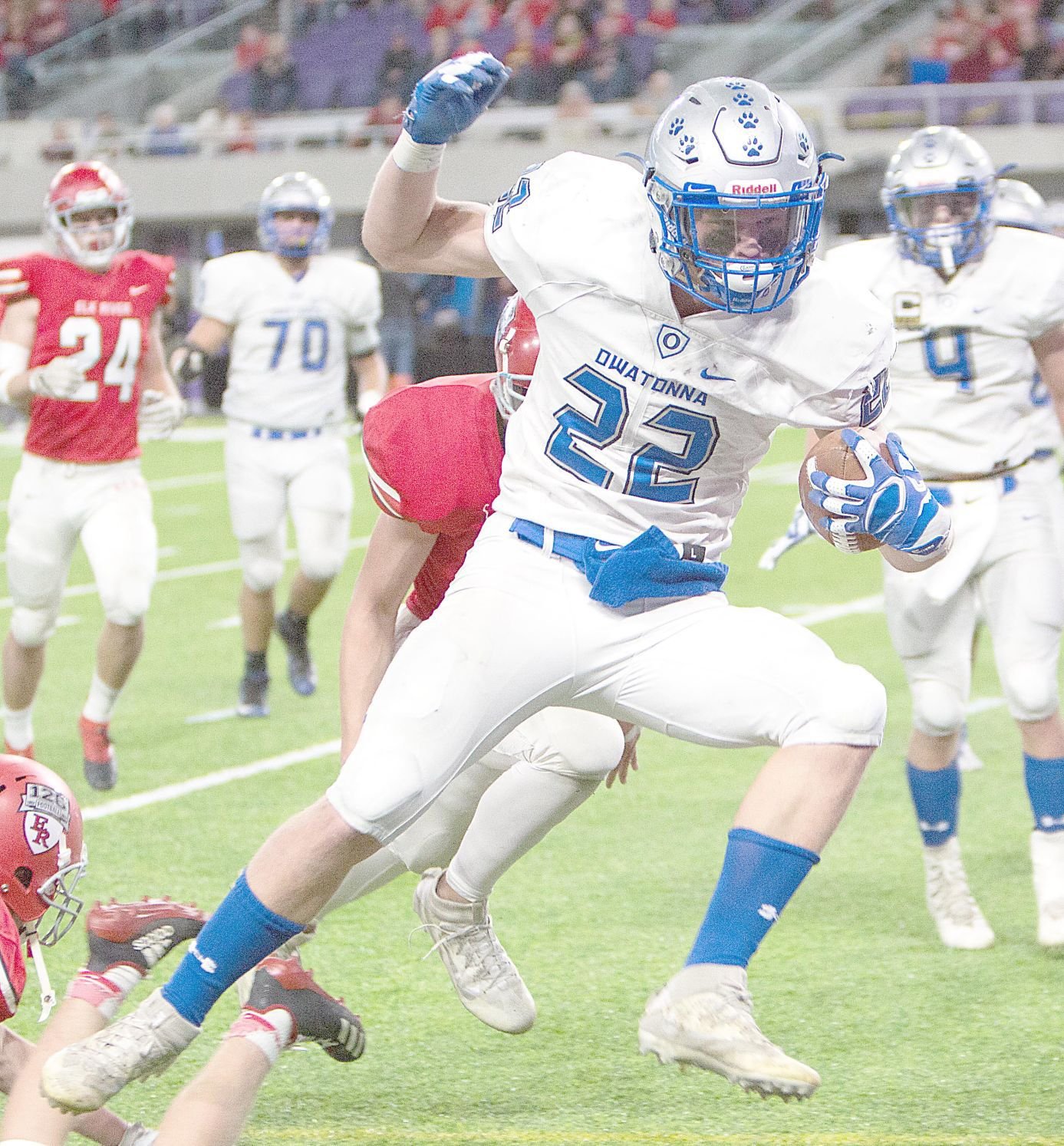 Owatonna's Jason Williamson breaks free from the Elk River defense and scores one of his record-tying six touchdowns on Saturday at U.S. Bank Stadium. (Harrison Kuhn/OHS Magnet/For the People's Press) 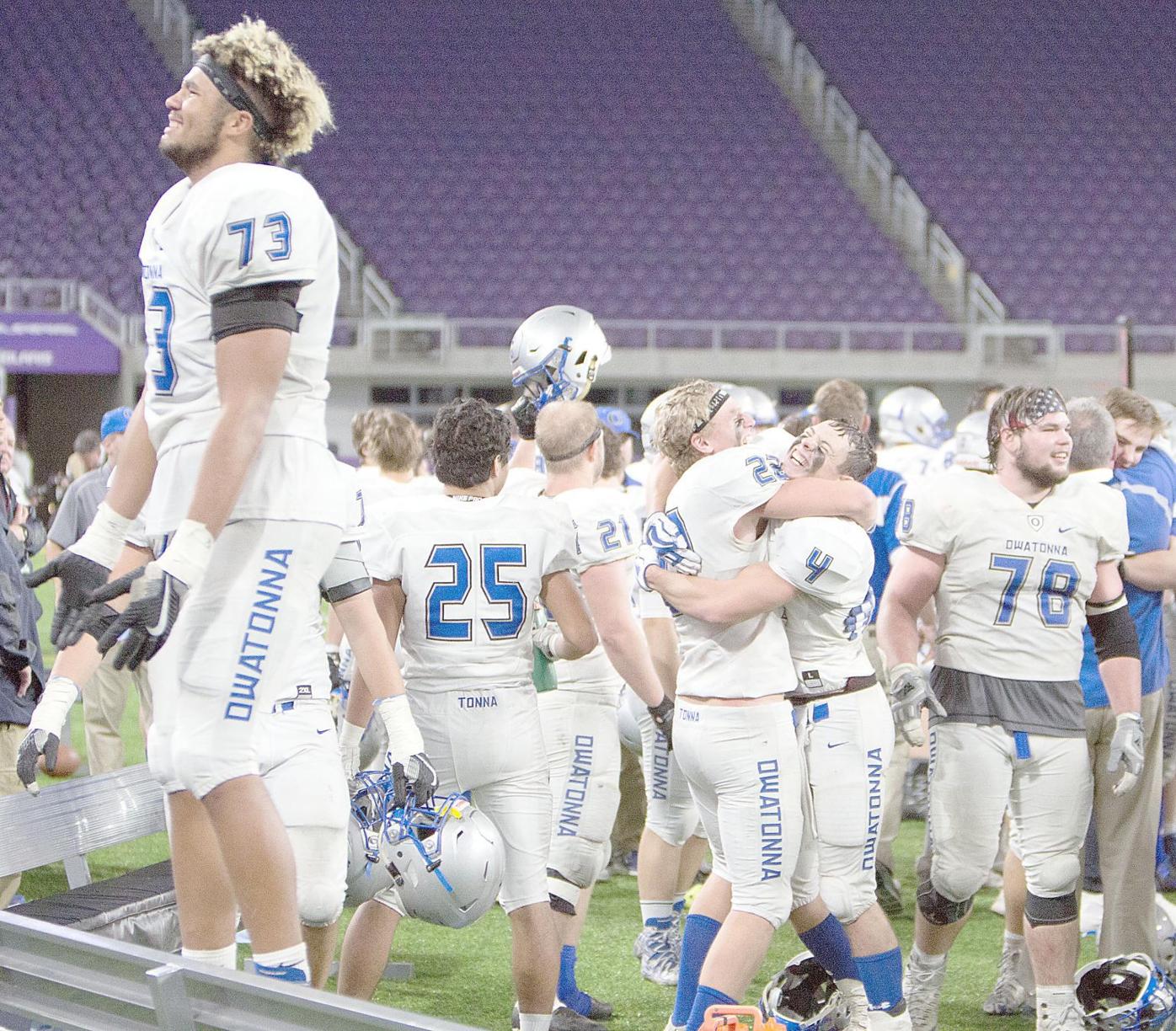 Owatonna's Jason Williamson breaks free from the Elk River defense and scores one of his record-tying six touchdowns on Saturday at U.S. Bank Stadium. (Harrison Kuhn/OHS Magnet/For the People's Press)

MINNEAPOLIS — Based purely on the number of returning starters from last year, it was clear that the Owatonna football team was going to be really good in 2017.

After OHS finished the regular season 7-1 and won the Section 1-5A tournament, really good slowly transformed into great, and now, OHS has ascended to an even loftier status.

These Huskies are downright special.

Climbing to heights only attained by one other football team in school history, Owatonna reached the summit of Class 5A on Saturday evening and can now call themselves state champions after dismantling Elk River, 63-26, at U.S. Bank Stadium.

“It still hasn’t hit me,” an elated Zach Mensink said outside the locker room. “I mean, wow, I just can’t believe it — it’s crazy.”

In the final act in what was a dazzling offensive showcase on turf in the three-game state tournament, the incomparable Huskies hung nine touchdowns on the defending Class 5A champions and captured their second state title in the last five years in resounding fashion. After averaging roughly 46 points per game during the regular season, OHS logged even crazier offensive numbers in the state tournament, putting up 59 points per game while leaving no doubt as to which team deserved to clutch the ultimate hardware.

Jason Williamson turned 23 carries into 213 sparking yards and five touchdowns against the Elks. The junior also returned a kick for six points to ignite a scoring rally that saw the Huskies turn a 14-7 deficit into a 49-14 advantage. His six total TDs tied a Prep Bowl record.

“I just did my normal routine,” Williamson said. “Ate a ham and pickle sub, got on the bus next to Alex Raichle and came to the game knowing that the offensive line was going to be aggressive and just trusted them and ran through the hole that they gave me.”

Fresh off a game in which he was named the MaxPreps USA Player of the Week against Brainerd, Abe Havelka was surgical once again, completing 11 of 15 passes for 138 yards to go with one rushing touchdown. The senior finished the season having found the end zone in each of Owatonna’s 13 games.

As perhaps the most balanced receiving group in the entire state, three different OHS players caught at least four passes. Williamson led the way with three grabs for 54 yards while Noah Budach finished with 47 receiving yards and 66 rushing yards, putting an exclamation point on the scoring with a 53-yard TD run with 2:50 left in the fourth quarter.

And then there was the defense.

Short-handed after the loss of starters Kade Serbus and Ben Zappa to injury, the Huskies found the antidote to the Elk River’s devastating ground attack, holding the Elks to just 333 rushing yards. Coming into Saturday’s game, ERHS was fresh off a 700-yard performance against Apple Valley and had averaged almost 500 yards per game.

“Everybody believed all game,” Mensink said. “Everyone stayed the course. Everyone did their jobs and executed and it all piece by piece fit together and we all did a great job.”

Owatonna (12-1) frustrated the Elks (11-2) and forced four punts by executing what was a near flawless game plan dialed up by defensive coordinator Marc Achterkirch.

“It was pretty much the same game plan as last season,” said Owatonna coach Jeff Williams, whose team held ERHS to less than 300 rushing yards in a 19-7 loss to the Elks in the 2016 state semifinals. “[Achterkirch] had an idea last year on some keying that he might be able to have the kids do that would at least slow Elk River down, because no one is going to shut them down completely. Our kids just read their keys and we cleaned up any misdirection they had. I thought by and large our kids did a really great job of just staying true to their reads.”

Logan Starkson stepped in for Zappa and finished second on the team with 12 tackles in his first career start. Cole Rocha forced a fumble, which was recovered by Owatonna, and ended with a team-best 15 stops while Tucker Alstead scooped a second ER fumble early in the third quarter and returned it for a back-breaking touchdown.

Big-bodied and possessing super strength, Kadyn Mulert led the push on the defensive front and made it tough for the Elks to gain any traction up the middle.

“It was just being about focused and playing more aggressive and making plays out there when you can,” Mulert said.

The Huskies kept the high-powered Elks out of rhythm and off-schedule all game, starting with a defensive stand in which Owatonna forced a rare Elk River punt on the game’s opening possession.

“That was crucial,” Starkson said. “I always feel like the first drive sets the tone for the entire game. You have to get them off the field and we did that. It was awesome.”

Owatonna capitalized and marched 67 yards on four plays and grabbed a 6-0 lead when Williamson knifed through the ER defense for a 33-yard touchdown. He added TD runs of 9, 43, 9 and 5 yards.

Thanks in large part to a 48-yard pass play, the Elks leveled the score 7-7 and eventually snagged a brief 14-7 advantage when Adam Nelson spun away from an arm tackle and dashed into the end zone from 39 yards out.

From there, it was all Huskies.

After Nelson’s TD, the Elks attempted a squib kick but Williamson quickly made them pay by scooping the ball near the right sideline and burning into the end zone from 67 yards out. Josh Nelson, who finished perfect on extra points and pounded three touchbacks, added the kick to level the score, 14-14.

On Owatonna’s next offensive possession, Williamson gave the Huskies the lead for good when he stretched the ball across the goal line with 7 minutes, 17 seconds left in the second quarter.

Following an Elk River fumble, which was recovered by Alex Raichle, the Huskies went ahead by two scores when Havelka skipped through a crease on the right side of the line late in the second quarter.

Owatonna scored on the third play from scrimmage in the second half on a Williamson 43-yard run and went ahead 42-14 when Alstead returned a fumble for a touchdown. OHS seized full control of the game at 49-14 when Williamson capped Owatonna’s longest drive of the game, finding pay dirt on the 10th play of the possession with 2:25 remaining in the third.

Notes: Owatonna’s Spencer Steckelberg was named Owatonna’s Teammate of the Year...This was Owatonna’s third appearance in the state championship game in the last six years...Adam Nelson led Elk River with 172 rushing yards, 78 of which came on one play...41 percent of Elk River’s 404 total offensive yards came on three long plays...The Huskies finished with 441 total yards (303 rushing, 138 passing)...Elk River had zero sacks...Budach finished with 113 total yards (66 rushing, 47 receiving). he capped the scoring with a 53-yard run with 2:50 left in the fourth quarter.