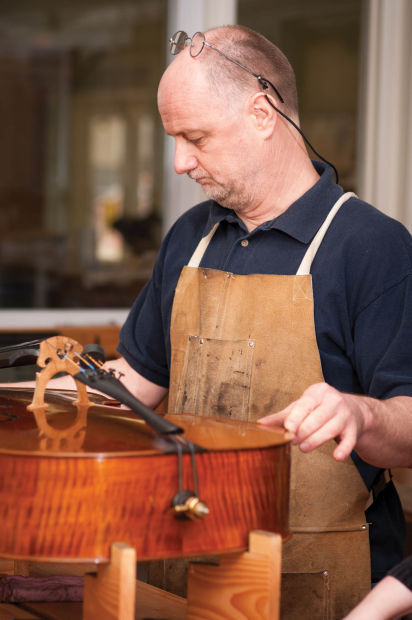 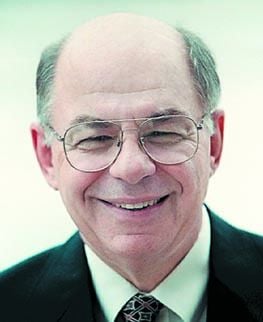 Paul Strelau, a 1979 graduate of Owatonna High School and son of the Otto Strelaus of Owatonna fondly remembers playing in Arnold Krueger’s Owatonna High School orchestra. He turned a love for music into an apprenticeship with a violin maker after receiving an undergraduate degree at the University of Wisconsin. He moved to Rochester, New York to enroll at the Eastman School of Music for his master’s degree in 1985 and remained after meeting his wife, Nancy. He played with the Rochester Philharmonic Orchestra for 12 years while developing his string repair shop which he founded in 1988. The repair shop named “Stringed Instrument Services” has morphed into a diversified business offering retail and wholesale stringed instruments as well as rentals.

For the first 10 years Strelau worked by himself. He added an employee in 1998 and has expanded gradually to an employee roster of 11 people. He expects to add a couple of more employees this next year.

Paul is especially proud of the work his company does with students. In an article written for the Rochester Business Journal he said, “We’re very student-focused. We love working with schools and students that are just starting out. That’s our niche.” Justin Rister, an instrument repair technician for the company said, “The best part about this job is we keep kids playing music. Everything that I work on usually gets back in the hands of the student.”

Every month the company ships roughly 120 of each instrument in its portfolio, including violins, cellos, basses and violas, to customers across the country. Roughly eight percent of sales are local with the majority of sales spread nationwide.

Repair technician Justin Rister said, “Everything is still hands-on. We have a limited number of power tools, but when I first started, I had to learn how to sharpen a chisel.”

In 1996 Paul’s company began working with CSC Products Inc., a wholesale division of Samuel Shen Musical instruments, a company based in Suzhou, China. That’s where things really started to take off,” Paul said. “Whether we like it or not, China has made big steps in the student part of the business. It belonged to Germany for years, even for centuries.

Strelau’s philosophy has remained the same for more than two decades in business. Getting instruments in the hands of students and amateurs will always be the company’s mission, he said. “To me, I like helping out. I like seeing young kids enjoy playing instruments; instruments that are easy to play. I love working with the students and with amateurs and providing them with good instruments that don’t cost much. It has been really rewarding.”

Since 2005, a group of Owatonna women have gathered monthly at the American Legion Club in Owatonna to assemble packages destined for soldiers serving overseas. This is the local chapter of “Minnesota Nice”, which has similar chapters all over the state. A number of these chapters have discontinued because most of their soldiers have returned home. The Owatonna Chapter, however, has elected to continue its mission of monthly contact with soldiers who are still serving in Afganistan. Kim Ramsey of Owatonna is the coordinator of the group of women and men who meet the second Tuesday of each month at 7:00 at the American Legion Club in Owatonna. Boxes are packed and sent to the soldiers monthly. The group welcomes items from the public that would be welcomed by these soldiers and anyone or group wishing to participate should give Kim a call at 455-1058, or you could bring them to the American Legion Club. One of the larger groups to participate was the student body at Lincoln Elementary School who collected hundreds of items to be used in the boxes. I can only imagine how much these boxes from home are appreciated by these soldiers. The Minnesota Nice tradition continues in Owatonna.

Since his college days, Dr. Jim McEnaney has been an avid supporter of his alma mater, the University of St. Thomas. His support has not gone unrecognized and recently, a beautiful patio located near the Summit Avenue entrance to the college has been named after Dr. Mac. The Dr. Jim McEnaney patio is frequently used by the student body of the school. Dr. McEnaney’s son, Brian, said, “This is a wonderful honor for our dad. The entire family is very proud that this patio has been named after him. It certainly reflects his lifetime dedication to the University.”

The noon Rotary Club in Owatonna recently presented dictionaries to all third graders in Owatonna. This is an annual project of the club. Rotarians go to the third grade classrooms to personally present the dictionaries to the students. Tom Sager, coordinator of the project said, “It’s just amazing how proud these kids are to have their own dictionaries. It is our hope that they are used continually during their schooling.”

This Monday, December 1, is the deadline day for on line bidding for the Minnesota State Public School Orphanage Museum charity auction, supported by AuctionCityOnline.com. The auction proceeds will raise funds to help support the orphanage museum’s day-to-day operations. You can bid on items by going to www.auctioncityonline.com. The auction ends at 7:00 p.m. Monday.

to helm of head band festival

Kim Cosens of Owatonna will again head up the planning for the 2015 Harry Wenger Marching Band Festival which is scheduled for June 20, 2015. The festival committee is already meeting and making plans for the event. Next year’s festival is the sixth annual. The Owatonna event is named after Harry Wenger, who was a band instructor at the high school and later founder of the Wenger Corporation. The Owatonna festival has rapidly established recognition as one of the top marching band festivals in the state. Board members include Stacy Hanson, Michele Rysavy, Christy Tryhus, Kim Cosens, Kris Busse, Leslea Partridge, Ann Miller and David Allard.

The Steele County Historical Society Village of Yesteryear will present Christmas in the Village next Friday, December 5, from 4:30-8:30 p.m. and Saturday, December 6 from 10 a.m. to 2 p.m. Sponsored by Hy-Vee, the event showcases the historic Dunnell Mansion lavishly decorated for the holidays. Friday night will feature a luminary lit village and strolling carolers from 4:30 to 8:30 p.m., a Christmas carol sing-along in the Saco Church from 5:30 to 7:30. All the buildings in the village will feature Christmas activities. Both days the History Center will be open with free admission. Friday night a wild rice soup and chili supper will be offered. Cost is $6.00 per person, with a hot dog meal for kids at $4.

The holiday weekend continues on Sunday with the “Historical Holiday House Tour”. I have listed the homes to be toured in a previous column. Tickets are available at Tri M Graphics, Kottke Jewelers, Johnson and Doerhoefer and a Touch of Charm in Blooming Prairie.

The annual Hospice Star of Hope lighting will take place at DayBreak Community Church across from Homestead Hospice House Sunday, December 7 at 5:00 p.m. Pastor Cindy Halvorson will share the message of hope and encouragement. Music will be provided by St. Johns Bell Choir, OHS Carolers and String Ensemble. The public is invited.

of Stamps for Santa

When the holidays roll around, I always think of the mid-sixties when I assisted Ken Kamholz in the Stamps for Santa campaign. This was in the days when you received Gold Bond and S & H Green and other brands of stamps when you made purchases at stores in Owatonna. The stamps could then be redeemed for merchandise. Ken coordinated his Stamps for Santa program, using donated trading stamps to purchase toys at Christmas for needy kids in Owatonna. For many years the Kamholz basement was filled with toys of all shapes and sizes that Ken and his wife Twylah would purchase. Ken assembled names of deserving kids from the Salvation Army and social services. On Christmas Eve afternoon Ken would don his Santa suit and make his way around town delivering gifts to the kids. It was a tremendous endeavor for the entire Kamholz family but Ken always told me that seeing the looks on children’s faces when he arrived at their door with gifts was well worth the effort.

The year was 2006 when the OHS and Marian graduates from the 1960s had a reunion in Owatonna. The event took place on August 5 of that year and among the many activities planned was the formation of an “all-class choir” to be directed by Roger Tenney, who, in 1967 was named the National Teacher of the Year. Bonnie Jean Flom, who cried uncontrollably when the announcement was made about Tenney’s award, coordinated the plans for organizing the choir.

Do you remember the signature songs that the choir sang on their Washington tour? They were “Happy Days are Here Again” (with a verse sung by the Tenney daughters, Christine, Dianne and Sharon. And “The Impossible Dream” with a solo by Bill Redeker.

I was included in advance notice of Tenney’s national award, however it had to be kept secret until Life magazine, sponsor of the National Teacher of the Year, was put on the shelves. It was quickly decided that Tenney’s choir should accompany him to Washington and the money needed to charter an airplane was raised in just a matter of days. Some of those accompanying the choir as chaperones included principal Don and Myrtle Moline, school superintendent C.P. and Mrs. Mickelson and several other choir parents and faculty members. At our radio station, we quickly decided that we should accompany Tenney and the choir to Washington to tape record every note sung and every speech made. Pink Allen and I flew to D.C. with bulky tape recorder in hand. Our tapings were later used for an LP record album which was made available to the public.

Ranada Emmans of Owatonna is observing her 99th birthday today. What a lady…full of energy….enough energy to put in a week’s work at Wal Mart where she is often seen in the Women’s ready to wear department. In case you’d like to drop her a card, her address is 875 North Elm in Owatonna.

A holiday gift and bake sale will be held at the Rice Lake Church, 8 miles east of Owatonna on Rose Street next Saturday, December 6 from 8 a.m. to 1 p.m.

Trinity Lutheran Church bake sale will be next Saturday, December 6. Coffee and home made coffee cake will be served at 8:30, the sale starts at 9:00. Lots of Norwegian treats. Thrivent Financial is supporting this fund raiser.

Deadline for nominations to the 2015 OHS Athletic Hall of Fame is December 31. Nomination forms are available at Kottke Jewelers, the OHS athletic office and at ohshalloffame.com.

A young ventriloquist is touring Sweden and puts on a show in a small fishing village. With his dummy on his knee, he starts going through his dumb blonde jokes. Suddenly a blonde woman in the fourth row stands on her chair and starts shouting, “I’ve heard enough of your stupid blonde jokes! What makes you think you can stereotype Swedish blonde women that way? What does the color of a woman’s hair have to do with her worth as a human being? It’s men like you who keep women like me from being respected at work and in the community, and from reaching our full potential as people! It’s men like you that make others think that all blondes are dumb. You and your kind continue to perpetuate discrimination against not only blondes, but in women in general, pathetically all in the name of humor!” The embarrassed ventriloquist begins to apologize and the blonde yells: “You stay out of this…I’m talking to that little jerk on your lap”!