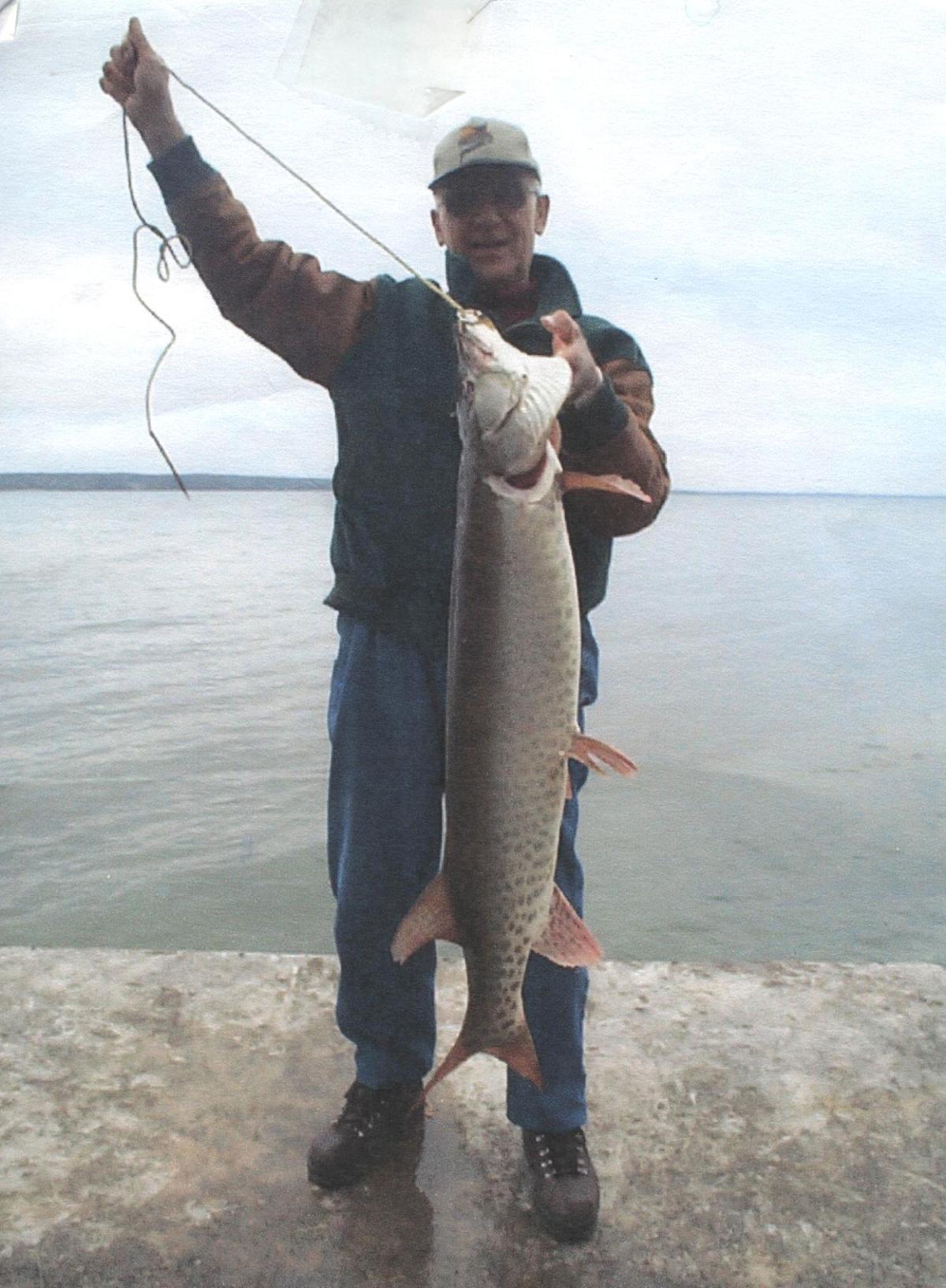 No big fish seen in the old quarry pond during the OWatonna Diving Club New Year’s Day dive. You never know what lies below you, like this 30 pound 46 1/2 inch musky caught by former Owatonnan Len Schreiber on Lake Miltona using a 6 pound test Berely line and a 1/4 ounce jig and minnow. 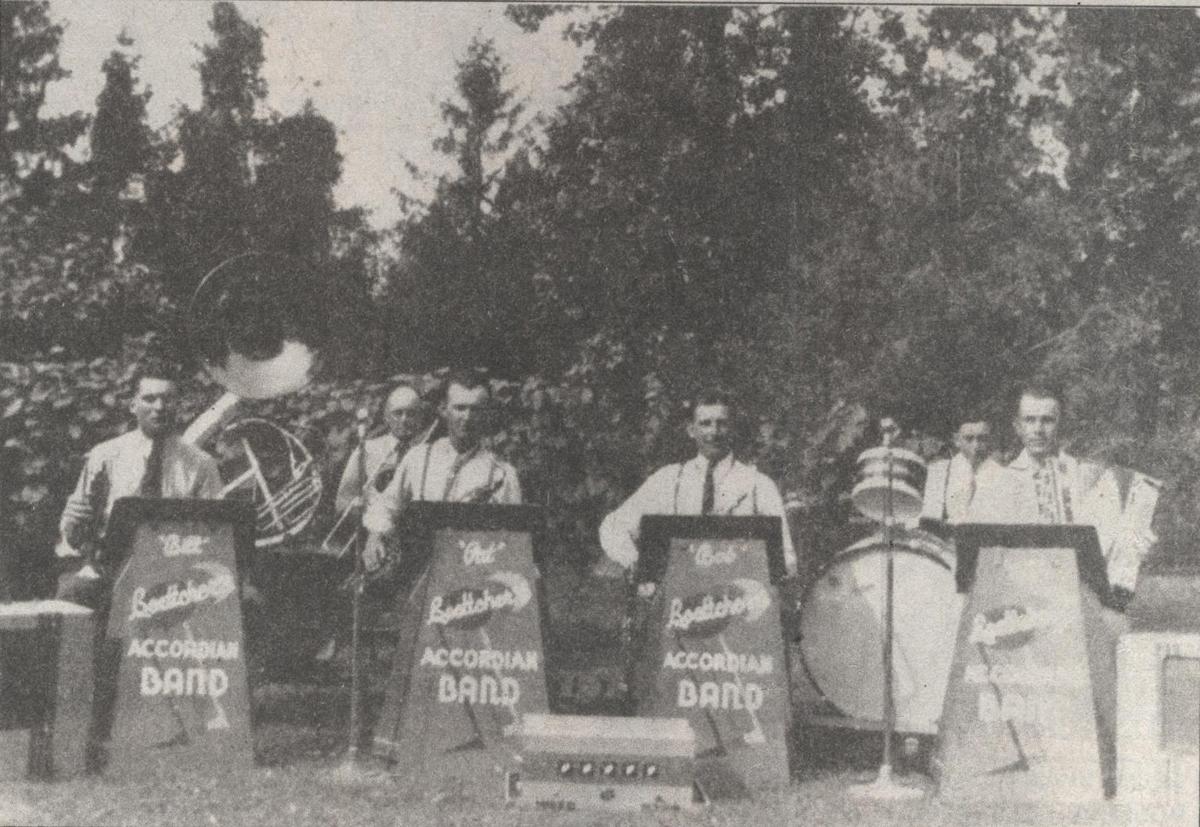 The Ali Boettcher Band in a photo taken in 1940. (Submitted photos)

No big fish seen in the old quarry pond during the OWatonna Diving Club New Year’s Day dive. You never know what lies below you, like this 30 pound 46 1/2 inch musky caught by former Owatonnan Len Schreiber on Lake Miltona using a 6 pound test Berely line and a 1/4 ounce jig and minnow.

The Ali Boettcher Band in a photo taken in 1940. (Submitted photos)

The Independent School District 761 Foundation doesn’t get a lot of publicity, it quietly moves along with its mission to provide and preserve opportunities for Owatonna Public Schools. A group of very dedicated Owatonna residents oversee the distribution of funds that are accumulated from interest earned on the total amount that exists from donations.

A bit of history is in order. The first meeting of the ISD 761 Foundation was held on May 7, 1992. I was a member of that original board along with George Dow, Mary Larson, Greg Stroik, (who still are on the board), Eldon Steuernagel, Odell Knutson, Pat Greenwood, Ardie Allen and Judy Strunc. At that time over $50,000 was already held by the district in various funds such as the harp fund, Hammond Fund, Kindergarten Fund etc. which provided initial assets. The first of the Robert Chladek estate funds ($365,000) primarily intended for Agricultural Education were received in November, 1994. Later, additional monies were received to enhance the Chladek Fund until December 2001 and its assets reached a total of $1.5 million. Today, total assets in the Foundation are around 3.7 million.

The Foundation awards 40 to 50 mini-grants yearly which include requests from teachers and staffs of the school district etc. Forty to fifty mini-grants are awarded yearly totaling close to $100,000. There is also a scholarship program that awards scholarship grants to students who apply.

The first monetary distribution was awarded for use during the 1995-’96 school year when $16,000 was awarded to the OHS Ag. Education Department and for ag programs in Medford, Blooming Prairie and NRHEG. Robert Chladek specifically wanted a portion of his funds donated to go to other Steele County High Schools.

Chairman Bruce Paulson reflected on the ISD 761’s accomplishments over the past 27 years since the beginning:

Since its inception, the Foundation’s assets have grown from roughly $50,000 to about $3.7 million.

The Foundation’s mini-grant program has expanded from a single award of $16,000 to the OHS Ag Department to over 50 smaller awards now totaling over $110,000. Over the past 25 years, mini-grant programs have totaled more than $2 million, helping to fund hundreds of local school programs.

Last year alone, the 761 Foundation awarded more than $140,000 to graduating seniors who excelled during their high school years and now need financial assistance with their post-secondary education. Over the years, the Foundation has awarded nearly $1.4 million to our graduates.

Paulson wrote, “I’d like to recognize each donor individually, there isn’t enough space here. However, I’d be remiss if didn’t acknowledge the late Robert Chladek who left a substantial portion of his estate to the 761 Foundation in the mid-90s. This gift was the Foundation’s first major donation, the catalyst, if you will, that allowed us to become a major funder of and for students in this community.

“For that reason, the 761 Foundation Board created the Robert Chladek Academic Ag Scholarship in 2015. The Foundation now awards a $5,000 scholarship each year to a graduating senior in Steele County who plans to study agribusiness at a college or university. This year, two graduating seniors, Anthony Manderfeld from Medford High School and Lexie Ignaszewski from NRHEG split the award.

“Owatonna’s current students are tomorrow’s leaders and they deserve this community’s full support as they pursue their dreams and make their way into the world of adulthood. I know the 761 Foundation will continue to play a pivotal role in making that happen.”

The Foundation recently awarded about $110,000 through its mini-grants program for use during the 2019-2020 school year. The awards will fun, partially or fully, 53 of 71 mini-grant requests received from teachers and principals in Owatonna, Blooming Prairie, Medford and New Richland.

“Although assets have grown significantly since the Foundation’s start in the early ‘90’s, programming needs continue to outpace our ability to fund all mini-grant requests.” said Paulson, chair.

Included in this year’s awards was $26,000 in funding from the Wenger Trust to purchase instruments for the Owatonna Middle School and high school orchestras.

Each spring, the 761 Foundation awards about $100,000 to teachers and principals to fund creative and innovative programs that benefit a large number of students and is not likely to be funded through traditional school funding.

Donations can be sent to the District 761 Foundation, Box 974, Owatonna, Minn. 55060. You may indicate if your donation should go to a specific fund or leave it to the discretion of the board to be used in its mission.

The Chamber of Commerce annual dinner will be held January 17 at the Country Club. Four new board members will be announced including Deb Gillard, Doug Betti, Mike Herman and Scott Mohs. Four outgoing members who have served on the board for three years or more include Pat McDermott, Graham Frie, Kim Schaufenbuel and Brian Speas.

It was September of 1993 when a weekend “60’s Bash” was held at the Upper Deck in Owatonna. The place was packed with folks who enjoyed remembering those trademark bands that got their start in Owatonna and remembering those trademark songs. A full band was made up of Jim (Little Caesar) Barnholdt, Rich Northrup from the “Radiants”, Brent Nelson from the “Revolutionaries”, Greg Northrup, Mike Doyle, Tom Grunwald from the “Emperors”, Dave O’Brian of Kasson from “Lemon Meringue”, Sid Gasner from the “Us Band” and Gary Sorenson and his son, Scott from “Little Caesar”.

A reminder of the Owatonna Music Boosters benefit concert being held tonight at 7:00 in the high school auditorium. You’ll see a mix of student groups, individuals and community members. Emcees will be school Superintendent Jeff Elstad and daughter Kaia. A silent auction will be held an hour before the concert. This is the major fundraising event for MBO.

No pickup seen in quarry pond

Four members of the Owatonna Diving Club went under the ice on New Year’s Day at the old quarry pond on North Cedar. Troy Matejcek, president of the club said that still not found was an old pickup from the quarry that had been pushed into the pond by floodwaters. Quite a few panfish were seen and one large northern pike was seen.

I’m surprised that more larger fish weren’t seen as I can remember my father-in-law Bill Klemmer told me that John Klemmer, original owner of the quarry stocked northern pike and even some walleyes in the pond. I can remember the day when Orville Pobanz, who worked for John brought home a huge bucket full of northern pike he had caught in the pond. There must still be some in there!

In the photo included with this column, my good friend Len Schreiber, formerly of Owatonna shows a muskie he caught on Lake Miltona in Alexandria. Miltona has reportedly been named a good muskie lake since they were stocked there by the DNR.

A band of yesteryear

The second photo included this week was taken in 1940 of one of Owatonna’s old and popular bands. The Ali Boettcher Accordion Band included Bill Graif (trumpet), Bill Staska, (trombone/tuba), Pat Simon (Sax), Bob Wesley (Sax), Henry Wesley (drums), and Alli Boettcher (accordion). Alli Boettcher had a blacksmith shop in Hope. He enlisted in the Marines and upon his return he re-opened his shop as a general repair garage. Alli eventually went to Stillwater where he worked as a prison guard. During the time he was in Steele County he also played with the Happy Danes band.

I had a reader ask me the other day why some folks call the hill on Linn Ave. was at one time called “Cinder Hill.” In the old days, the hill was covered with cinders from householder’s furnaces and stoves used to give cars traction when going up the hill. The hill was literally black with cinders.

Which Owatonna High School football player scored the first touchdown in the present football field? None other than Bill Kottke in a 13 to 7 victory over Albert Lea.

Another reminder of the 4th annual Spaghetti Supper fundraiser sponsored by the American Legion being held next Saturday, January 18 at the Legion clubrooms. Tickets are available in advance for $8.00 at Kottke Jewelers or from Legion members. Tickets are $9.00 at the door. All proceeds go to the local chapter of the “Beyond the Yellow Ribbon” group.

Many of you readers remember your school days and some of the happenings that involved you and your classmates. I started school in Des Moines and attended Bird School for kindergarten through grade 4. That school has long since been torn down. I had one teacher named Mrs. Leach that frightened me to death! She was wicked and always threatened to keep the class after school due to their mis-behavior. There was no school bus service back then, so there was no alternative but to walk. The shortest distance was through a cemetery which always made me nervous. I can remember when our family moved to Windsor Heights in Des Moines. The elementary school was just a couple of blocks away from our house so it was an easy journey to make each day. I will always remember one day in my 6th grade when a fellow student brought a practice hand grenade to school. Where he got it I don’t know but when he was showing it off to fellow students, someone pulled the pin and the grenade started smoking. I remember the teacher running to the student, grabbing the grenade and throwing it through the classroom window. The result was a loud bang and flash of light. Yes, he was immediately sent to the principal’s office!

When our family moved to Fargo, North Dakota, I was in the 7th grade. I attended grades 7 and 8 at the new Ben Franklin Junior High which was located just across the street from our house. I can always remember that I was amazed to see green blackboards in the classrooms. There was also one teacher I had that twisted your ear if you did anything wrong. Not allowed today, that’s for sure!

My last four years of school were spent at Edina High School. It was in the old high school building along Normandale Road. It was a great four years. It was the first time that I was able to drive my own car to school. We had a couple of students in my class whose father owned car dealerships so they always had a new car to drive to school. At the time I attended there was only one high school in Edina before the school was separated to Edina East and Edina West. Great times and memories!

Hospital regulations require a wheelchair for patients being discharged. One nurse found an elderly gentleman already dressed and sitting on the bed with a suitcase at his feet, who insisted he didn’t need any help to leave the hospital. After a chat about rules being rules, he reluctantly let the nurse wheel him to the elevator. On the way down, the nurse asked him if his wife was meeting him. “I don’t know,” he said. “She’s still upstairs changing out of her hospital gown!”