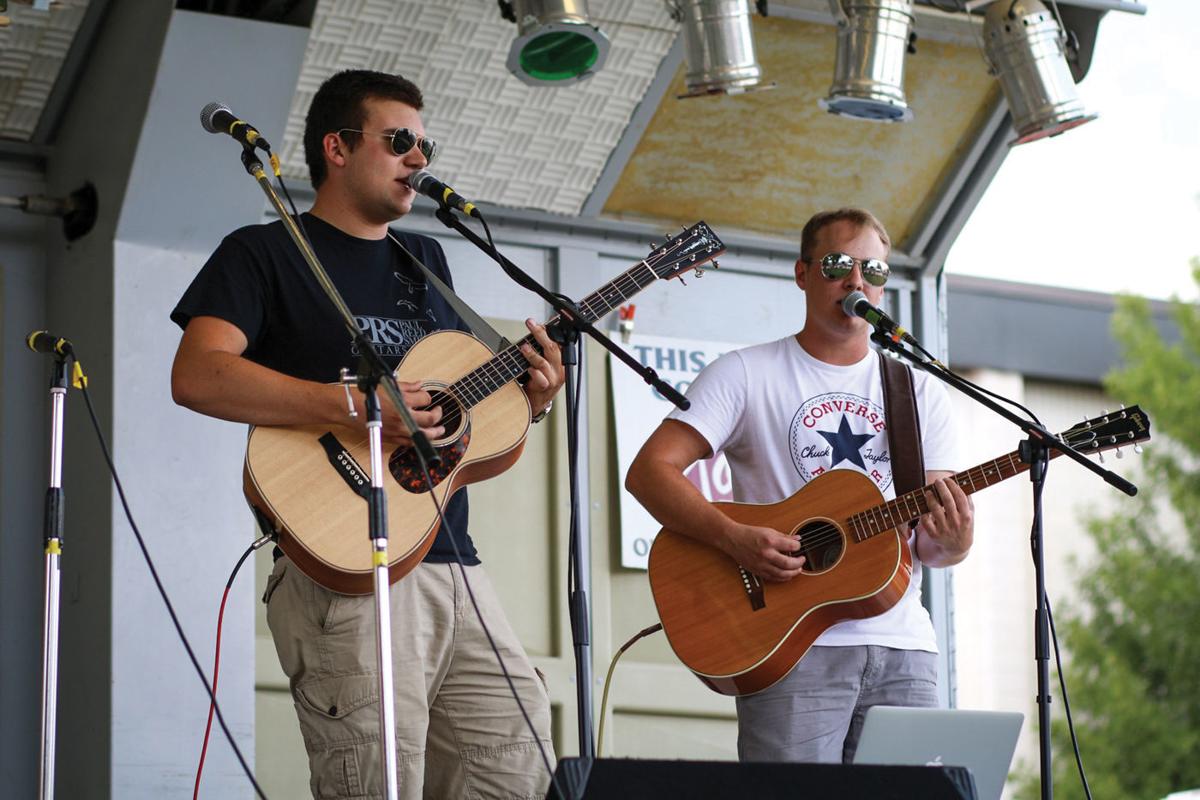 The 11@7 concert in Central Park by Owatonna’s own Noah DeKam and Logan Johnson will anchor Downtown Thursday. (Press file photo) 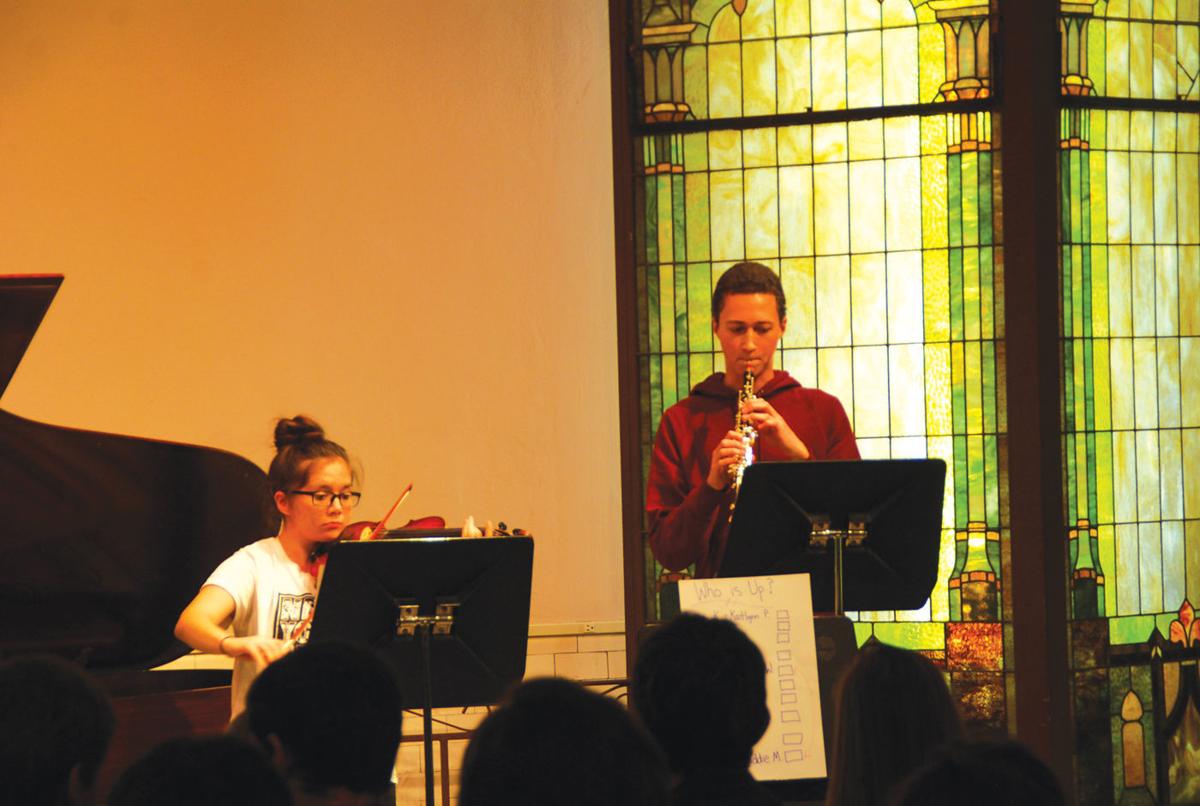 Owatonna High School students will conduct Arts Splash — a mixture of performing and visual arts — in the “pocket park” between Old Town Bagels and Flooring Frenzy Thursday evening, the first time the popular event has been conducted during the summer. (Press file photo)

The 11@7 concert in Central Park by Owatonna’s own Noah DeKam and Logan Johnson will anchor Downtown Thursday. (Press file photo)

Owatonna High School students will conduct Arts Splash — a mixture of performing and visual arts — in the “pocket park” between Old Town Bagels and Flooring Frenzy Thursday evening, the first time the popular event has been conducted during the summer. (Press file photo)

OWATONNA — While Thursday’s concert in the park featuring Owatonna’s own Noah DeKam and Logan Johnson — part of the 11@7 Concert Series — is more than enough of a draw on its own, Central Park and the 100 and 200 blocks of Cedar Avenue will also play host to many artists, food purveyors, and musicians in hopes of making downtown Owatonna a can’t-miss destination for the first edition of Downtown Thursday.

MainStreet Owatonna undertook a “visioning” process last year, and one thing they heard over and over from local businesses was a desire among their younger workers for “something fun to do downtown,” similar to Rochester’s Thursdays on First and 3rd and Albert Lea’s Wind Down Wednesday, said MainStreet’s Shirley Schultz. “They want a place to hang out for a while after work.”

DeKam & Johnson have played in and around Owatonna for years, including in the 11@7 Concert Series, which is “always a great time with a big and supportive crowd,” Johnson said.

The dynamic duo released their first full-length album, “Late at Night,” earlier this year and have been playing regularly in the Twin Cities this summer.

They also recently released a new single, “Summer Love,” from a “new collection of tunes we have,” he said. “Our future plans are to finish recording that set of songs, get them released, and to keep playing shows around the Twin Cities.”

DeKam & Johnson are scheduled to return to Owatonna later this month for the Steele County Free Fair, where they’re slated to perform on the United Prairie Bank Fair Square Stage at 1:30 and 2:45 p.m. Aug. 15.

Schultz and Tori Urch, a 2017 graduate of Owatonna High School who is interning with the Owatonna Area Chamber of Commerce and Tourism this summer, reached out to “makers,” whether they make food, art, or music, and the response was tremendous, even on relatively short notice, for Downtown Thursday, Schultz said. In addition to the DeKam & Johnson performance at 7 p.m. in the park, Dave Williams will play earlier Thursday, and Owatonna High School students will conduct Arts Splash — a mixture of performing and visual arts — in the “pocket park” between Old Town Bagels and Flooring Frenzy.

Urch, who helped coordinate Arts Splash events as an OHS student council member, knows how “popular” Arts Splash is, but “we’ve never done one in the summer,” she said. “We were looking for younger people to be part of this, and they came to mind right away.”

Youth — be they young professionals, high school students, or recent OHS graduates back in Owatonna for the summer — “are looking for ways to be in community together,” said Urch, who is currently studying event planning at Bethel University. Downtown Thursday ought to “increase community and get more traffic downtown.”

Food vendors will line Central Park, and — in anticipation of Torey’s move downtown — the restaurant will serve beer, wine, burgers, and rollups in front of their future location on Cedar Avenue, Schultz said. The 100 and 200 blocks of Cedar will be blocked off to vehicular traffic Thursday night so pedestrians can walk to and from the park and the vendors and artists, and several downtown stores will extend their hours so folks can stop in and shop.

Music will begin — and vendors will open — at 4 p.m. and remain serving throughout the DeKam & Johnson show, Schultz said. “It’s good exposure for the artists and makers,” perhaps to a “different audience” than they usually see.

“I think it’ll be a cool mix between arts, food, and entertainment,” Urch said. “It’s something new and different for Owatonna, and nobody should miss any part of it.”

MainStreet will survey those involved Thursday following the conclusion of Downtown Thursday for future suggestions, as the goal is to eventually make these downtown festivals a monthly event in Owatonna, Schultz said. “Most folks have been to something like this in a different city and want it here.”

“Come down for a little bit, or the whole evening,” she added. “Maybe you will see some friends — or (make) some new friends.”