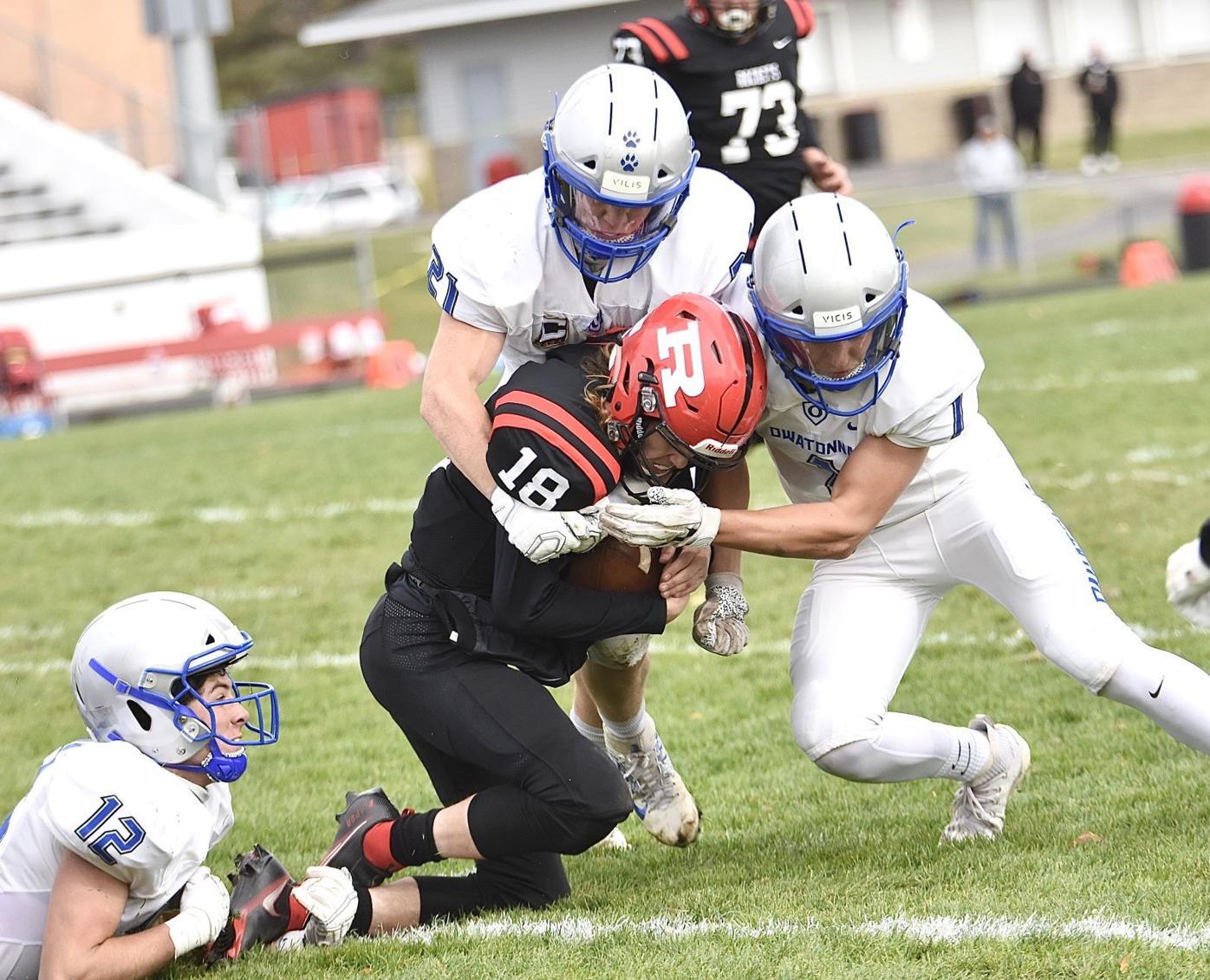 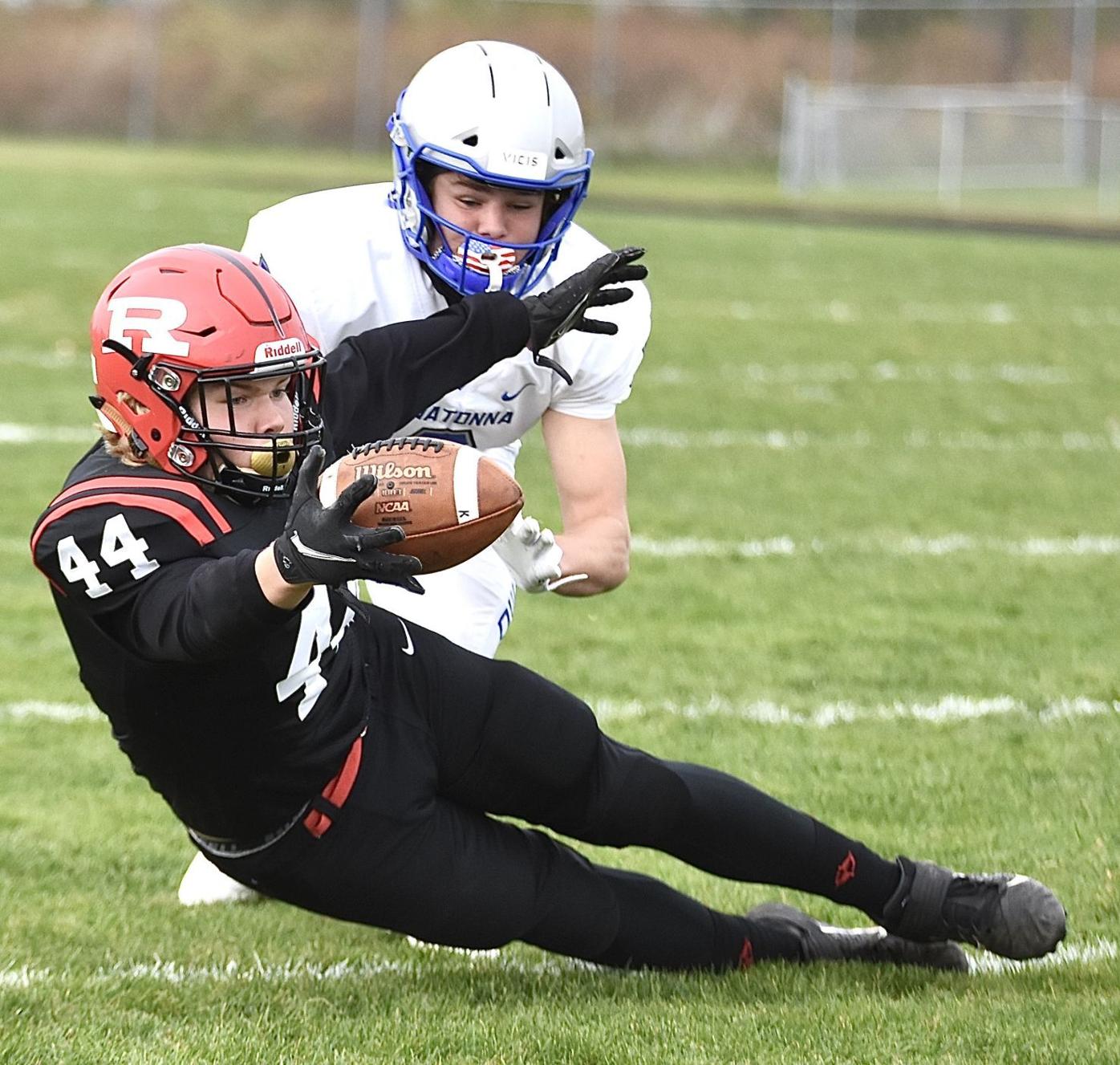 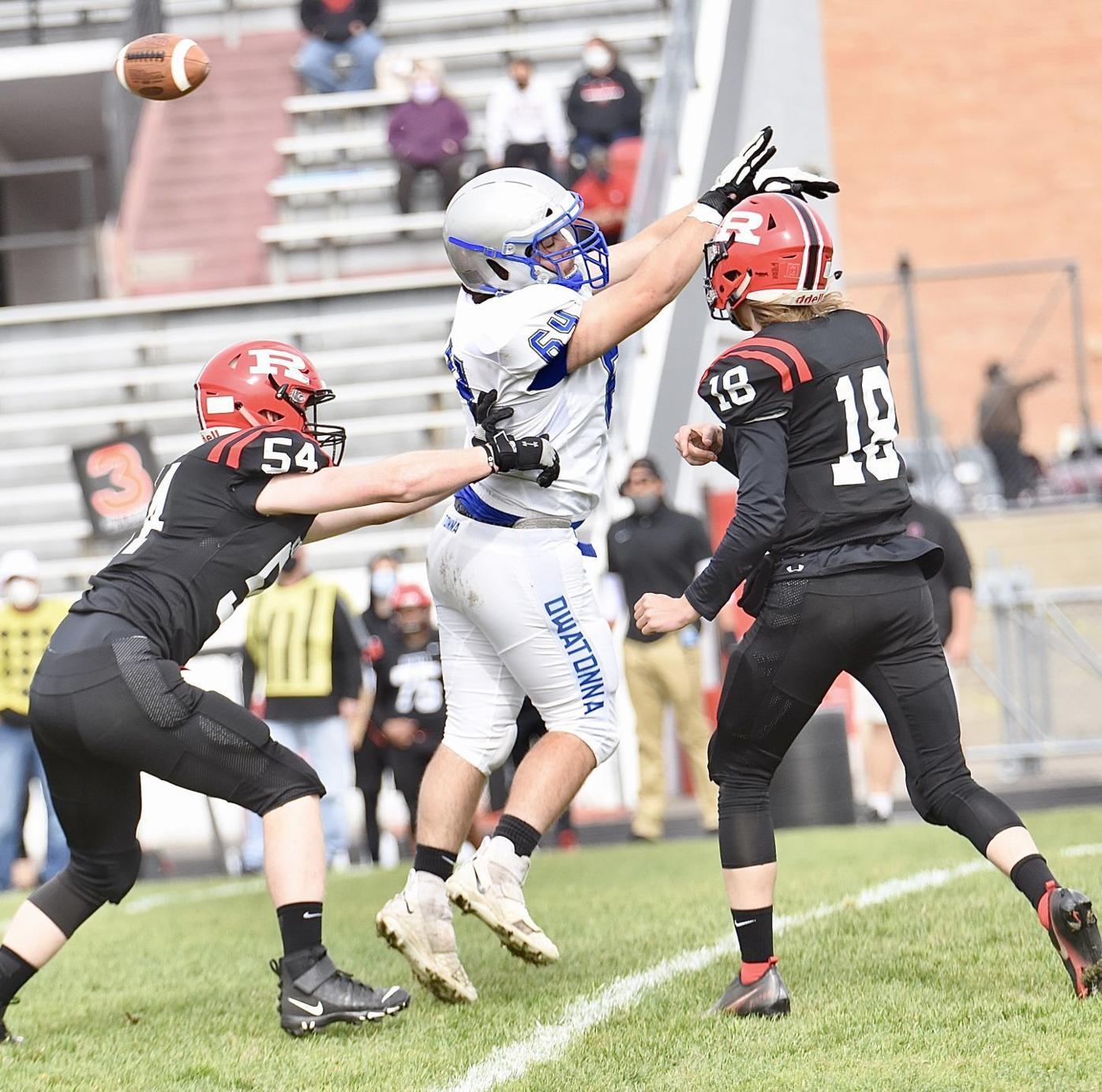 ROCHESTER — It would be a stretch to call it a “get right” game, but the Owatonna football team certainly wanted to show discernable improvement after Week 1’s inconsistent, albeit thrilling, victory over Rochester Mayo.

Seven days following one of its least-productive rushing performances in recent regular season memory, the Huskies leaned on their gnarly offensive line and dominated on defense in a 40-0 drubbing of Rochester John Marshall on Saturday afternoon in Big Southeast District action at John Drews Field.

Led by Tanner Hall, seven different OHS rushers got in on the act and teamed up to churn out 316 yards and five touchdowns on the ground. All-but a small handful of Hall’s team-high 118 yards came in the first three quarters while teammate Dylan Maas had a breakout performance of sorts, ringing up 53 yards and two touchdowns on just eight carries, all of which came against the Rockets’ starting defense.

Nick Williams entered the game on Owatonna’s second offensive possession and displayed a sound level of toughness and vision, grinding out 42 yards on eight touches. The junior fullback posted six rushes of at least four yards and netted positive yardage on every carry.

Connor Grems racked up 63 yards and accounted for the Huskies’ longest run of the season thus far when he busted free for a 32-yard gain in the middle of the fourth quarter. He consumed all 40 yards on Owatonna’s final scoring drive of the game, smashing forward for a 1-yard score with 6 minutes, 18 seconds on the clock to give Owatonna a 39-0 lead and initiate the running clock.

“I thought we did a nice job in the run game today,” Owatonna head coach Jeff Williams said. “That was something we wanted to establish. You know, we threw the ball probably 50% of the time last week and one of the things we pride ourselves on is having the ability to do both, and we didn’t do a great job in the run game (in Week 1 against Mayo). It’s not going to get warmer, either. And it’s not going to get any less windy, so if we are going to be built for playing into late-October and into November, we have to be able to run the ball.”

Owatonna’s defense also came to play, imposing its will on the Rockets up front and surrendering just nine rushing yards on 14 attempts. John Marshall discovered what turned out to be a fleeting level of success throwing the ball on the game’s opening possession, but finished with just 95 yards through the air, most of which came on a 43-yard completion in the middle of the second quarter on a broken play.

The Rockets did not gain a first down in the second half and netted just one yard in the final 24 minutes, running just 15 plays in the span.

“I thought we did a nice job of stopping their run game,” Williams said. “They never really got any traction on the ground.”

When John Marshall wasn’t handing the ball off and running into a brick wall up front, it was often throwing it into the hands of Owatonna defenders. Junior cornerback Tanner Stendel speared an acrobatic one-handed interception across the middle with roughly five minutes left in the second quarter to end a Rockets’ drive three plays after it crossed midfield for what would ultimately be the only time in the contest.

On the first play of JM’s next offensive possession, defensive back Zach Stransky matched strides with his man deep down the right sideline and tracked down a pass in front of the receiver, making a highlight-reel over-the-shoulder interception late in the second quarter.

Budach also picked off a pass in the second half after defensive lineman Nate Smith batted the ball high into the air at the line of scrimmage.

“They were forced to go up into the air with it and then out kids knew it was coming at that point,” Williams said. “They were able to sit on those passes and I thought they did a nice job of making a play on the ball.”

Fresh off an ultra-efficient, 242-yard performance in the season-opener in which he accounted for three touchdowns, OHS quarterback, Brayden Truelson, finished 7-for-11 for 89 yards and added another three TDs to his ledger (two rushing, one passing). He found Payton Beyer from six yards in the middle of the third quarter to account for the first of consecutive OHS touchdowns that ultimately transformed a somewhat tenuous lead into a blowout in a back-breaking four-minute stretch. In two game thus far, the senior has completed close to 70% of his throws and scored six touchdowns.

Beyer led Owatonna with three receptions for 53 yards. Budach and Hall also caught a pair of passes and combined for 32 receiving yards.

FROM START TO FINISH

John Marshall took the ball to start the game and Cole Peterson completed five consecutive passes on the drive before the Rockets stalled at midfield. John Marshall collected two of its three total first downs on the possession.

Riding the legs of Hall, the Huskies marched 79 yards on 11 plays — sapping 5:07 from the clock — and scored when Truelson moved the rugby scrum forward across the goal line from just inside the 1 yard line.

With its defense stiffening, Owatonna (2-0 overall, 2-0 Big SE) quickly got the ball back and promptly drove deep into the red zone, but left empty-handed after Truelson’s pass fell incomplete on fourth down on the second play of the second quarter from the 14 yard line.

When the Huskies took possession a few minutes later, they invaded JM territory on the first play of the drive when Truelson spun a bullet to Beyer for a 36-yard competition while being flushed out of the pocket. Two plays later, Truelson darted across the goal line after reading the JM defense as it tracked Hall and shifted in his direction on the option, leaving a gaping hole on the left side.

OHS scored twice in the third quarter to blow the game open, starting the second half with a touchdown march that was kindled by five consecutive plays that went 11, 9, 10, 11, 5 and 15 yards and ended when Truelson found Beyer on the left side of the end zone for a jump-ball touchdown with 7:34 on the clock.

The Rockets (0-2, 0-2) committed their third turnover of the game on the ensuing possession and the Huskies made them pay, taking the ball at JM’s 38 and engineering an eight-play drive that included five runs by Maas, the final of which ended with him dashing into the end zone with 3:33 on the clock.

John Marshall punted three times in the fourth quarter on a trio of three-and-outs while Owatonna padded its lead with a 20-yard TD scamper from Maas at 11:20 and a 1-yard score by Grems at 6:18.

-Outside of penalties and a quarterback kneel down on the final play of the game, the Huskies were tackled behind the line of scrimmage just once the entire game for a negative-1 yard loss early in the fourth quarter.

The Huskies head back home for their first Friday night game of the season against Isaiah Huber and Rochester Century at 7 p.m. The Panthers’ senior tailback has accumulated 371 rushing yards and six touchdowns in two games this season.

Huber has already committed to future Division I program Augustana University in Sioux Falls and has been clocked at a legitimate 4.5 seconds in the 40-yard dash, or roughly the average speed of an NFL running back in 2019.

“I’m not even sure we are going to be able to simulate that in practice,” Williams said of Huber’s blazing speed. “Our job is to get everybody to play their responsibility in their gap, and is (Huber) going to hurt us a couple times? Yes, he will. And hopefully that’s a wake up call that our kids need to obviously sprint to the football at all times. We harp on that in practice — everybody to the ball. It will be important to fly 11 to the football, especially when (Huber) has it.”

Mayo 34, Century 14: Bennett Ellsworth finished with 313 yards through the air and the Spartans (1-1) rebounded nicely from their heart-breaking loss to the Huskies in Week 1. Complimenting its high-flying passing attack was a Mayo ground game that needed just 21 carries to reach 144 yards, most of which came from speedster DeMonte Simmons (123 yards). Though still productive (23 carries, 140 yards), Century's senior dynamo, Isaiah Huber, was held in check after an explosive season-opener against the Rockets where he rang up five touchdowns and 231 yards. The Panthers will take a 1-1 record into a Week 3 showdown with Owatonna.

No. 5 Mankato West 20, Mankato East 0: It wasn't pretty, but the Scarlets found a way to retain the Jug in the annual trophy game played Wolverton Field. West (2-0) gained a paltry 27 rushing yards on 24 carries and completed only 39% of its passes, but got the ball into the hands of its major D-I recruit, Mekhi Collins (80 receiving yards, two TDs), in big situations and did more than enough on defense to remain undefeated. The Cougars, who kept their cross-town rivals off the scoreboard for the game's first 20 minutes, finished with 210 total yards and fell to 1-1.

New Prague 23, Northfield 7: A week after suffering a heart-breaking loss to Class 4A Faribault, the Raiders' offense failed to launch in their home-opener and gained just 90 total yards. The Trojans (1-1) found pay dirt once apiece in the first and second quarters and put the game on ice in the fourth by tackling Northfield (0-2) in the its end zone for a safety at 5:22 and answering with a touchdown in the following drive.