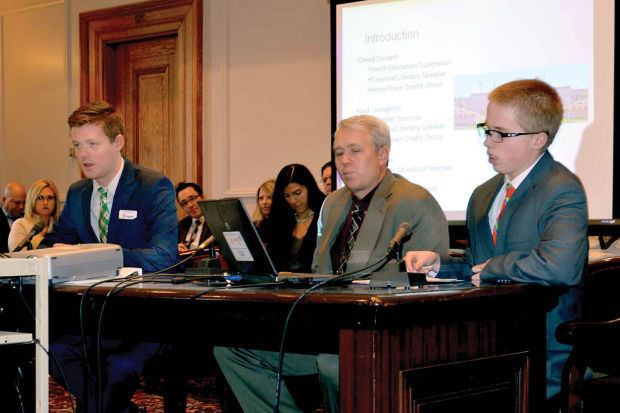 From left to right: David Dorsett, Scott Pierce and Jack Livingston testify before the Minnesota Senates Commerce Committee in December about the success of HomeTown Credit Union’s student-run branch at Owatonna High School. Dorsett is the credit union’s youth education supervisor, Pierce is an OHS business education teacher, and Livingston is a high school senior and a two-year employee at the credit union. (Submitted photo) 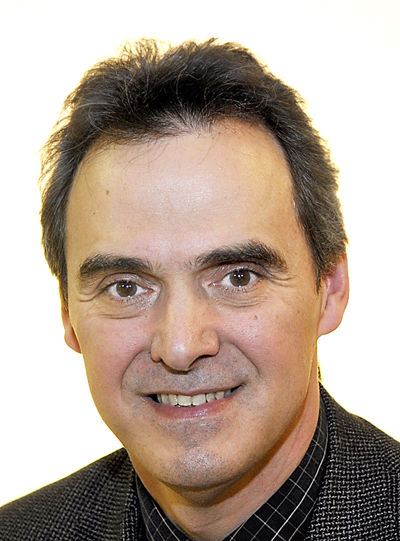 When Jack Livingston testified before the Minnesota Senate Commerce Committee last month, he told the senators about the benefits he has derived from working with HomeTown Credit Union here in Owatonna.

And, he said, he will be able to use those experiences not only throughout his career but as he furthers his education.

Yes, Mr. Livingston plans to study finance at Minnesota State University-Mankato starting next year. Currently, he’s a senior — that’s right, a senior — at Owatonna High School, and the “branch” he was talking about is the student-run branch at OHS.

So impressed were the powers that be with the partnership between the high school and the credit union, that representatives from both institutions were invited to the December hearing. HomeTown Credit Union’s Vice President of Business Growth Marian Murphy shared an account of the hearing with me.

So, begin with considering the comments of Minnesota Department of Commerce Commissioner Mike Rothman, who kicked off the day’s testimony.

“I applaud the partnership between HomeTown Credit Union and Owatonna High School,” the commissioner said. “They are on the front line of financial education and are helping Minnesotans build financial security starting in kindergarten and throughout their lives.”

The credit union branch, which opened in the fall of 2011, is the state’s first in-school, student run credit union, which means that students not only get to use its services, but those who work there — under the guidance and supervision of a credit union manager, of course — gain professional experience, like young Mr. Livingston. Both are vital to the mission of that branch.

“We strive to educate youth to help avoid financial pitfalls later on in life,” said David Dorsett, the youth education supervisor for the credit union during the hearing. “Our student employees learn by working at the branch and also share the knowledge they gain with their peers.”

The senators got their chance to talk about the student-run credit union branch, including Steele County’s own Sen. Vicki Jensen, DFL-Owatonna, the vice chair of the Commerce Committee.

“It is important to me as a legislator to see what schools are doing in financial education and to get a broader idea of what is possible,” Sen. Jensen said. “I see the value in what you are doing.”

Sen. James Metzen, DFL-South St. Paul and the chair of the committee, agreed.

“This should be going on in every school in Minnesota,” he said. “It’s so essential for kids to learn about finances and money.”

I should add that Owatonna High School and HomeTown Credit Union have apparently started a trend. The number of student-run branches in the state has grown to five during 2014 and more are planned to open next year.

As promised, an update on the Cedar Ballroom.

You may recall that I reported that Owatonna Fit Lab, the business formerly known as Health Nutz, was moving into a larger space — a larger space that would not only bring the business back to downtown Owatonna, but would also allow it to do so much more.

That move took place at the first of the year with Owatonna Fit Lab occupying the space formerly occupied by the Cedar Ballroom.

One really big unanswered question in that report, however, was this: Whatever happened to Cedar Ballroom?

I tried at the time to reach Brian and Lynette Dawley, the owners and instructors of the Cedar Ballroom, but with the holidays and such, I wasn’t able to reach them.

I’ve since reached them.

Yes, Lynette confirmed this week, they did close the dance studio in downtown Owatonna. But, she said, the couple, who have been dancing together for close to 25 years, is still in business giving dance lessons.

“We’re teaching out of our home,” Lynette told me, adding that they’ve had a studio in their home for a long time — much longer than they ran the Cedar Ballroom, which they opened in November 2009.

Of course, the business had to have a new name. They couldn’t very well call it Cedar Ballroom if they were no longer on Cedar Avenue and if they didn’t have a ballroom. So the name they are using — actually, the name they’ve had for years — is Dance Made Easy.

When the Dawleys first opened Cedar Ballroom, the intent, Lynette said, was not only to hold ballroom dancing classes, but to open it up to other groups and organizations to use the space. For a while, other dance lessons — ones oriented for children — were taught there, as were tae kwan do classes. There was even a church group that met there for a time, she told me.

But the number of instructors and groups utilizing the space declined, and with that decline came a decision for the Dawleys.

“We decided we didn’t need a storefront for our business,” Lynette told me.

Though the studio they have in their home doesn’t allow them to teach larger classes, let alone have ballroom dances like they did in the ballroom, she said. In the meantime, they are still teaching not only the private lessons in their home, but Community Education classes as well.

And what about venues for ballroom dances for those who like an occasional foxtrot?

If you’d like to see some of the fruits of the Dawleys’ labor, you’ll have a chance. Once again this year they are choreographing two area versions of Dancing with the Stars, one here in Owatonna that will benefit Healthy Seniors of Steele County and one in Austin that will benefit Habitat for Humanity of Mower County.

Beauterre Recovery Institute has announced its leadership team for its new program opening in Owatonna.

In case you’re not familiar yet with that name, it’s understandable. It’s new. Very new.

Beauterre — from a French word meaning “beautiful earth” — is the name given to the new 60-bed residential addiction recovery program being established by Meridian Behavioral Health, a service provider based in New Brighton that specializes in the treatment of addictive behavior. That’s the organization that purchased the Daniel C. Gainey Conference Center last year from its former owner, the University of St. Thomas.

According to a press release from the company, Beauterre has announced that its leadership team will be Jack Bice as president, Fred Bettner as operations and program director and Matt Malloy as business development director.

Mr. Bice has more than 20 years of leadership experience in behavioral health care and substance abuse treatment organizations, including a recent term as chief operating officer at Meridian.

Mr. Bettner, who is an Owatonna native, has worked in various group homes, residential treatment centers and inpatient psychiatric hospitals since 1995. He also has worked with developmentally disabled adults and children as program director supervising group homes and in-home family support.

So when in Beauterre opening?

Well, January is here and the treatment center is nearly ready to open, Mr. Malloy told me Friday.

“The week of the 19th we should be prepared to take patients,” he said. “Of course, that’s predicated on our getting licensing.”

Which, at least, he doesn’t believe will be an issue.

Beauterre is hoping to have a formal ribbon-cutting ceremony sometime that week, he said.

Heard some Word on the Street? We want to know about it. Contact Jeffrey Jackson, the managing editor of the Owatonna People’s Press, at 444-2371 or via e-mail at jjackson@owatonna.com or news@owatonna.com.