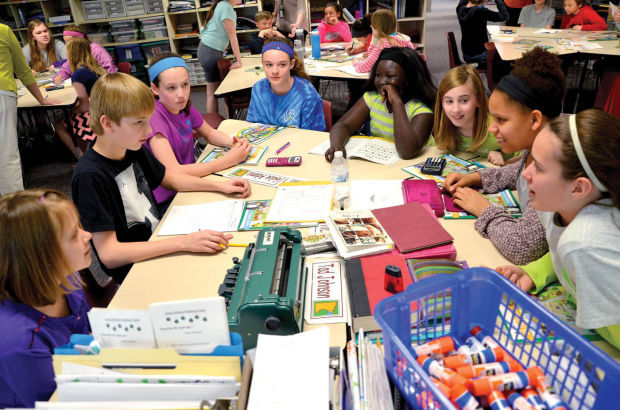 ABOVE: Students running the JA BizTown press brainstorm slogan ideas for advertising. BELOW: Greta Korbel, CEO of the BizTown radio station, works on what they are going to put on their website. (Photos by Kim Hyatt/People’s Press) 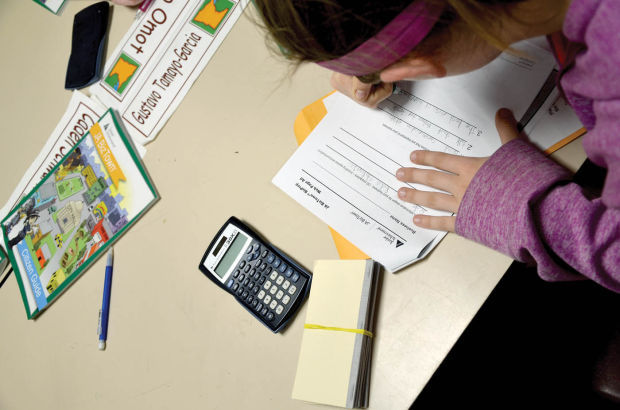 Greta Korbel, CEO of the BizTown radio station, works on what they are going to put on their website. (Kim Hyatt/People's Press)

ABOVE: Students running the JA BizTown press brainstorm slogan ideas for advertising. BELOW: Greta Korbel, CEO of the BizTown radio station, works on what they are going to put on their website. (Photos by Kim Hyatt/People’s Press)

Greta Korbel, CEO of the BizTown radio station, works on what they are going to put on their website. (Kim Hyatt/People's Press)

OWATONNA — Did you know how to balance a checkbook in sixth grade?

Did you even have a checkbook?

For the first time, students at Willow Creek Intermediate are participating in a real-world, hands-on, kid-sized city to experience how to be a successful citizen in a global economy.

Willow Creekers in the Maple and Oak houses will take their first-ever BizTown field trips on April 21 and 23 to the Junior Achievement headquarters in Maplewood where they will run BizTown for the day by holding jobs and earning paychecks.

Junior Achievement programs like JA BizTown are taught in about 700 schools throughout the Upper Midwest and the program aligns with academic standards.

“Once they get up there they’re getting paid and working together in teams to produce an outcome,” said Laura Heyne, JA district Manager in Owatonna. “It’s as real as you can get without being real.”

The types of businesses are what people would typically see in cities like Owatonna: a bank, wellness center, café and radio station where students work in a real sound booth and can pay to request songs throughout the day.

Students are given a checkbook and debit card when they arrive to BizTown that they can use to buy real products made by students and other goods like popcorn and juice.

“It’s pretty realistic in term of money in and out,” Heyne said.

“What does a non-profit mean? What does a philanthropist do?” asked Maple House teacher Amy Stringfield who walked around her classroom with a stack of JA checkbooks.

On Tuesday, students were learning about organizations like the Red Cross and having their businesses sign pledges to donate to a BizTown non-profit like Good Karma Dog Rescue, Cheerful Givers and Feed My Starving Children.

Nearby, a similar lesson was underway in Theresa Wagoner’s classroom where students were told its not just “about working and getting a paycheck” but being a good citizen and “demonstrating positive leadership” by supporting non-profits.

Students were also switching gears to plan newspaper and radio advertisements for their businesses.

Maple House teacher Jennifer Hansen only had to say the words, “like a good neighbor—“ before students chimed in with “State Farm is there!” to get an idea of how they should create their ads.

At the newspaper business, eight students circled around the table full of notebooks to brainstorm slogans.

“We are the BizTown Press! We’re the best, better than the rest!” said Jack Titchenal, playing the role of chief executive officer of the paper.

“How about ‘better than the best?’” said Grace Linders, chief financial officer. “I came up with that all by myself!”

During the past several weeks, students have budgeted for employee and executive salaries, operating costs and drafted promissory notes. They filled out a 90-page “citizen guide” that has various activities and assignments for students to learn more about how to work in BizTown while on their field trip.

Of course, BizTown has local government that is student-run, too.

“It’s cool how it’s a smaller world where we get to experience how hard our parents work,” said 11-year-old Hanson who is in the process of writing her speech for when they visit BizTown next week.

Hanson said she had to make a campaign video for elections where she told her fellow classmates/BizTown citizens that she would “be a good mayor and meet your expectations,” like “being on time, organized, social and always staying on task.”

Hanson said she would “maybe” consider being a mayor when she grows up, but “it’s kind of tough.” Still, she said her friends told her she’s doing a good job and she’s learned a lot about taxes and managing budgets.

The students will go to BizTown next week with their teachers and about 30 community volunteers to help the students run their businesses.

"It was a lot of fun to teach the interview process at this age.  We stressed the importance of some valuable social skills. After they role-played what to do when they went for an interview, many gained confidence for the real interview that they had to do with adults from our community. We practiced introducing themselves as they shook the employer’s hand, and also making eye contact with the employer.

The students answered some questions prior to the interview and these were used to practice responding to the employer.  Manners matter too. As they ended the interview they practiced saying thank you. This may have felt a bit awkward, but the practice paid off!  They did a fantastic job! I was very proud of how they handled themselves with this part of the JA Biztown process!" -Julie Olson

"I would have to simply say that the program is a spectacular program that exposes students into the adult world. They are able to learn about finances, economy that surrounds the businesses in town, creativity, and working together in groups.

Us six teachers have put in so much time into understanding the program, designing lessons to meet our sixth graders needs, worked through kinks together, and implemented the lessons since Winter break. Students can be exposed to a simulated hands-on world that builds on their strengths. Us teachers are excited to go to BizTown for the first time and so are the students. It will be a perfect end to MCA testing into fun learning that is completely applicable." -Abby Swanson

"I just love how we are teaching the real to life situations, such as, writing out a check and teaching them about how the economy and business works.   I have also been able learn more about my students family’s background.  It has actually helped me understand and know my students better." -Dannielle Sayles

What’s all the buzz about BizTown?

Read more about the program by going to the Junior Achievement website: www.jaum.org/programs/ja-biztown/

Get a tour of this year’s BizTown: www.jaum.org/programs/ja-biztown/biztown-tour/

Covering schools, arts and entertainment for the Owatonna People's Press. From the Northland, University of Minnesota, Duluth journalism and photography graduate.