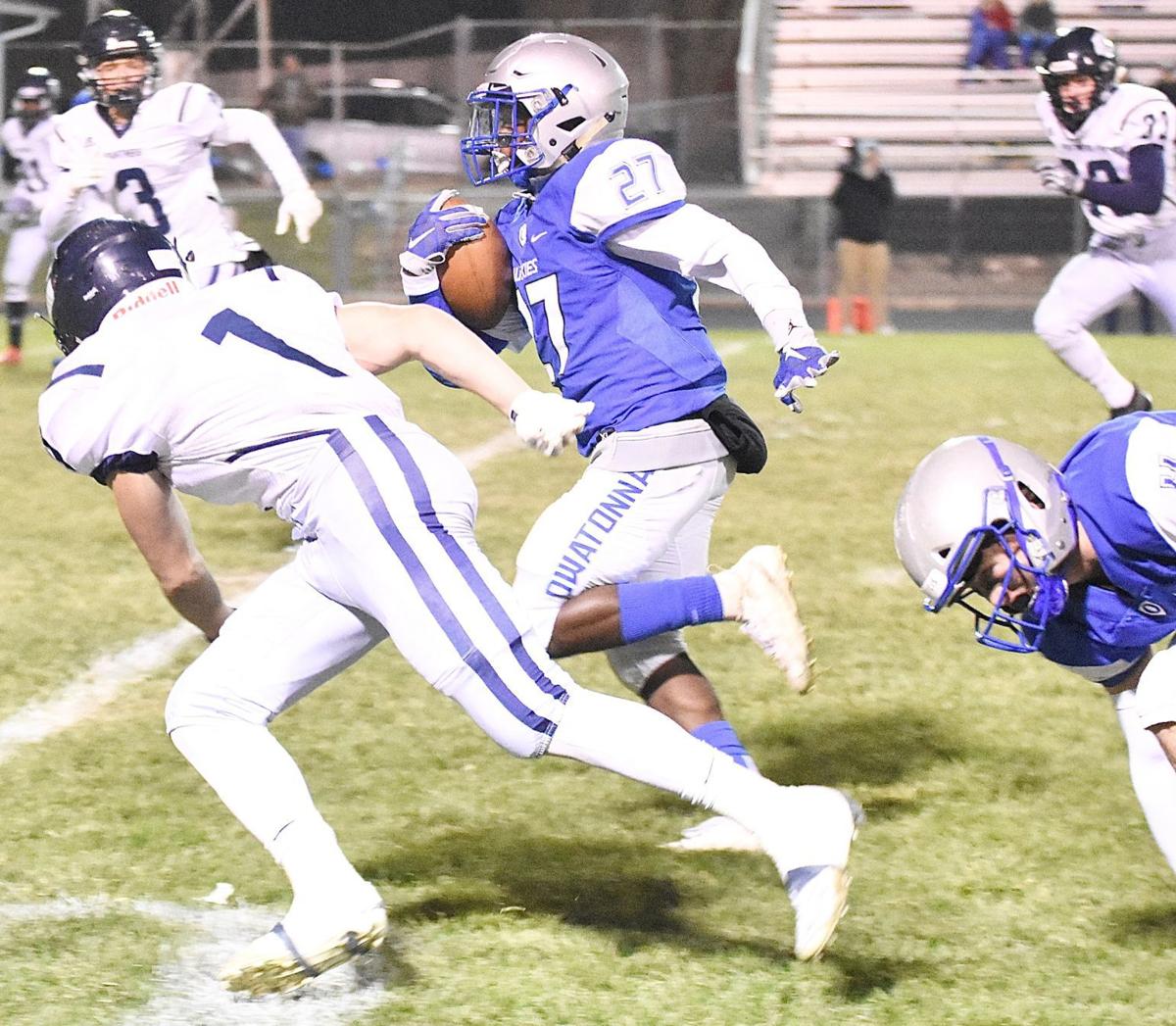 Owatonna running back, Tanner Hall, breaks free for a 27-yard touchdown in the first quarter against Rochester Century in the Section 1-5A championship game. The Huskies won, 43-6. (Jon Weisbrod/People’s Press) 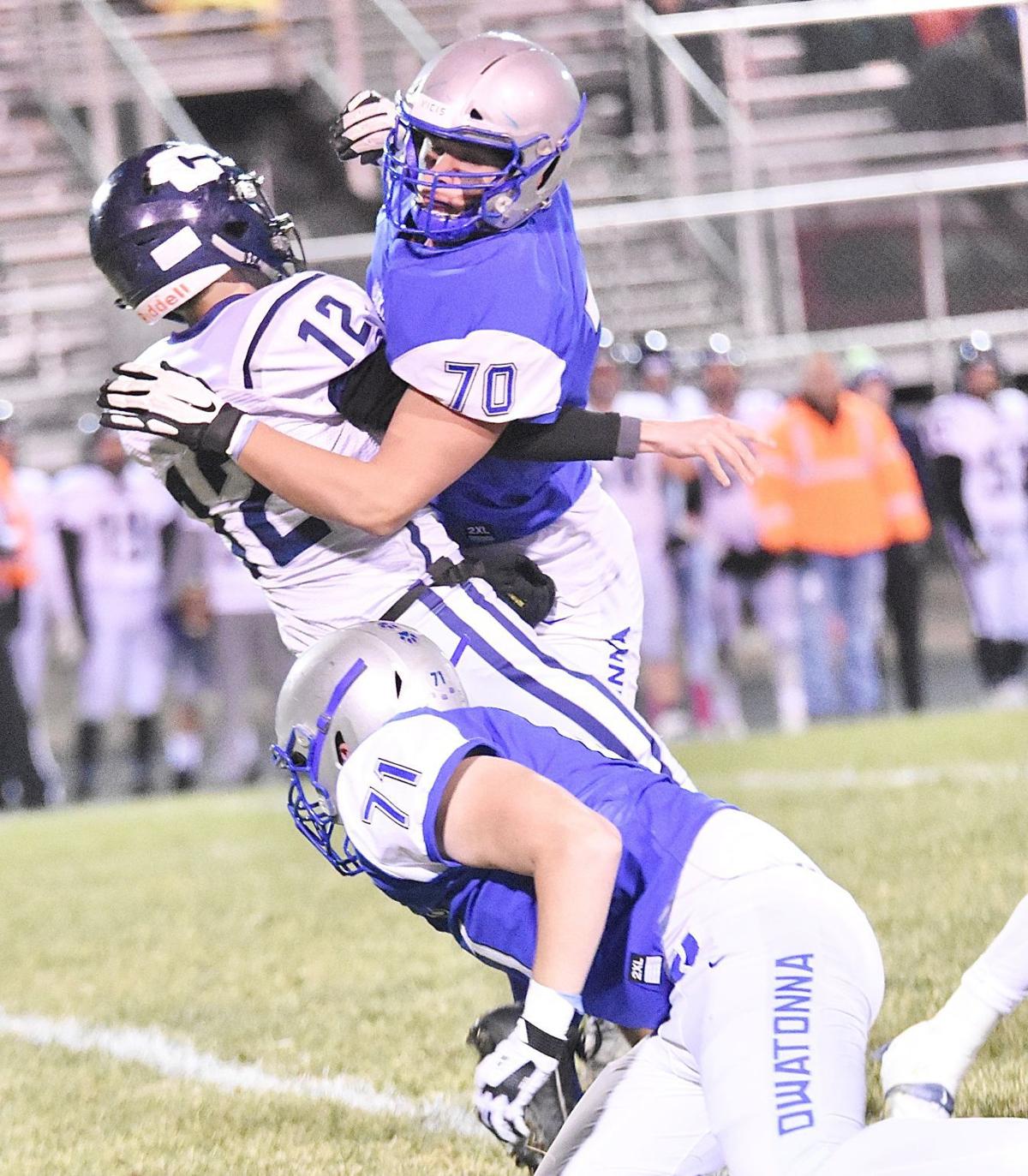 Owatonna running back, Tanner Hall, breaks free for a 27-yard touchdown in the first quarter against Rochester Century in the Section 1-5A championship game. The Huskies won, 43-6. (Jon Weisbrod/People’s Press)

If there is one thing that is obvious, the bulldozing freight train that is the Owatonna football team doesn’t have rear-view mirrors.

There simply isn’t an individual associated with the program that doesn’t trek forward through the taxing three-month campaign without blinders fully engaged.

So, when the top-seeded Huskies systematically out-played another strong opponent and secured their fourth consecutive Section 1-5A championship with a 43-6 victory over second-seeded Rochester Century on Friday night, it should come as no surprise that the sentiment following the game included a minimal amount of reflection and a maximum amount of single-minded focus.

“Right now, I know these guys have big goals that they want to accomplish and that is going to mean getting some video exchanged tonight and getting up early tomorrow and finding a way to get prepared for the next opponent,” long-time head coach Jeff Williams said. “You just don’t have time to get too big picture right now.”

Like the rest of his teammates, junior receiver Payton Beyer — who led Owatonna with 56 receiving yards to go with one touchdown — was delighted to have earned a spot in the eight-team Class 5A state tournament, but echoed Williams’ idea of remaining solely focused on the road ahead.

The next challenge for the Huskies will unquestionably be their greatest of the season as they will make the trip north to Woodbury High School and square off against the team they defeated in last season’s state championship game, St. Thomas Academy. The Cadets (9-1) trailed early against Apple Valley on Friday but rolled up four unanswered touchdowns and won, 28-7, in the Section 3-5A championship. Blossoming rival, Elk River, also looms on Owatonna’s side of the bracket as it will play Moorhead the same day at Monticello High School.

“It will be fun,” Beyer said with a wide grin when asked about the forthcoming matchup with St. Thomas.

Against the Panthers (7-3), five different players accounted for Owatonna’s six touchdowns as the balanced Huskies accumulated 325 yards of total offense in a game that was shifted into running time by the start of the fourth quarter. Brayden Truelson finished an effective 6-for-13 for 140 yards and two touchdowns. He also added 31 yards on the ground on two attempts.

Owatonna’s starting defense yielded just 20 rushing yards on 11 carries while forcing five turnovers. The Panthers essentially ditched any semblance of a running game by the middle of the first quarter and went to the air 33 times, completing 12 passes for 139 yards while tossing four interceptions. Hunter Menden, Zach Stransky, Keenan Young and Isaac Oppegard each picked off one pass.

“We hit their quarterback even when we didn’t get sacks” Williams said. “We made our presence felt and our secondary played great. (Century) really got nothing, and for our secondary to be able to do that was big.”

Tanner Hall eclipsed 1,000 yards for the season and led the Huskies with 95 rushing yards and two touchdowns on 17 carries. The shifty, 5-foot-8 junior busted loose for touchdowns runs of 26 and 27 yards, respectively, in the first quarter before Beyer snatched a 28-yard scoring strike from Brayden Truelson to help make it 22-0 with 5 minutes, 11 seconds left in the opening stanza.

“We got the lead right away but still had a game plan that we wanted to implement,” Williams said. “We wanted to see a few things, so we still ran a few different packages and really were trying to fight the urge to play it too close to the vest. Sometimes you get up early and it’s like ‘alright, now we just have to hang on for 24 minutes’ and that’s no way to play football.”

Owatonna’s advantage swelled to 29-0 by the middle of the second quarter when Zach Stransky skated into the end zone from 6 yards out.

Aided by a pair of penalties that spanned a combined 25 yards, the Panthers found themselves seven yards from the end zone late in the second quarter only to be denied after two runs and a pair of incomplete passes that netted 1 yard. With Owatonna pinned deep in its own territory and coming up short on 3rd-and-3 on the ensuing possession, Century took advantage of great field position after a short punt and penetrated the red zone once again thanks to a 15-yard infraction by the Huskies. Two plays later, Jack Fisher scored the Panthers’ only touchdown on a 16-yard pass from Nate Eberhart.

After trading punts with Century to open the second half, the Huskies pried the ball loose from Ethan Dixson’s grasp and landed on it in great position at the CHS 29-yard line, setting up a 17-yard Matt Williams touchdown reception from Truelson with 8:08 on the clock.

Owatonna added to its lead roughly five minutes later and capped the scoring when Isaac Gefre pushed forward for a short touchdown plunge to cap a 69-yard drive that was buoyed by a pair of 30-yard plays, one coming on a Truelson run and the other on a pass to Beyer that was snared at the 1-yard line.

The Huskies took the ball to start the game and misfired on their first two passes, setting up a 3rd-and-10 at the Century 25.

Snatching the first of his two huge grabs on the opening possession, the 6-foot-3 senior moved the chains with a 12-yard reception before burning his defender for a 35-yard catch that came one play before Hall’s first touchdown. Oppegard finished with 47 yards receiving — all of which came on the opening possession — and intercepted a pass on an acrobatic play early in the fourth quarter.

“He opened up the game and closed it,” Williams said. “We were feeling them out a little in our spread formation (on the opening drive) and usually we can get that underneath stuff but they changed a few things on us and it was like, ‘OK, let’s take a shot at Oppe and see if we can get him one-on-one with the corner, and he came up with a big play right on the boundary and all the sudden we are off to the races.”

The Huskies quickly regained possession as the Panthers’ second play from scrimmage — a pass attempt from Eberhart — was tipped at the line and landed in the arms of Menden. One play later, Hall was breaking free for a 26-yard touchdown at the 10:02-mark.

Century actually made things interesting in the middle of the opening quarter when Mark Leonard scooped a fumble near the boundary and lumbered roughly 60 yards to the OHS 17-yard line. Setting up in the red zone for the first time all game and trailing 14-0, Eberhart was picked off by Stransky on the first play of the drive and could only watch as the Owatonna junior sped down the sideline and returned the ball to the Panthers’ 28-yard line. Facing a 3rd-and-long on the following possession, Truelson feathered a pass to Beyer deep in the end zone that briefly stuck to his finger-tips before falling to the grass for an incomplete pass. Scrimmaging too deep for a field goal and far to close for a punt, Truelson dialed up the exact same play on fourth down, and this time Beyer hung on for the 26-yard score.

“I think the coaches just saw that I beat my man the first time and I dropped it the first time but didn’t let that happen again,” Beyer said. “I’m glad he went mt way again.”

The Huskies wouldn’t score again until the 6:59-mark of the second quarter when Stransky capped a 38-yard drive with his first rushing touchdown since Week 1.