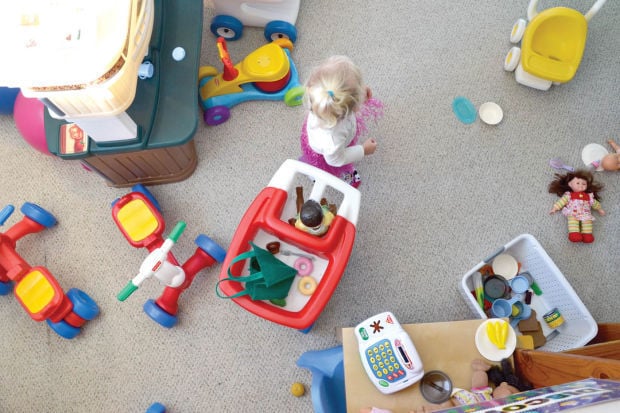 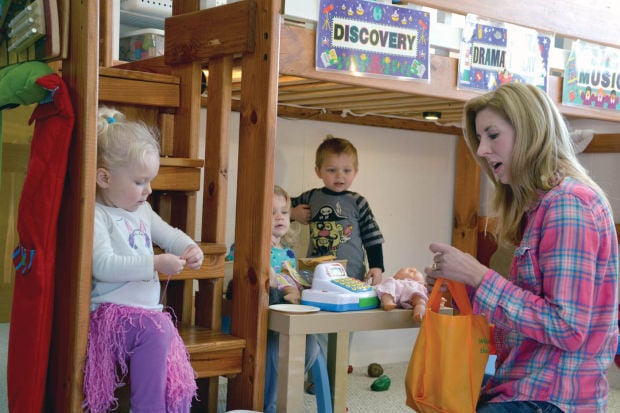 At Creative Adventures Child Care, owner Christy Hanson plays with some of the kids she cares for every day. Hanson received her four-star rating from Parent Aware, a new quality rating system that will roll out to all counties in Minnesota starting January of next year. (Kim Hyatt/People’s Press)

At Creative Adventures Child Care, owner Christy Hanson plays with some of the kids she cares for every day. Hanson received her four-star rating from Parent Aware, a new quality rating system that will roll out to all counties in Minnesota starting January of next year. (Kim Hyatt/People’s Press)

OWATONNA — At Creative Adventures Child Care in Owatonna, 3-year-old Breckland can already recognize all letters of the alphabet in lower and uppercase and she knows the sound each one of those letters makes.

“I try to foster a routine and environment that promotes their well-being in all ways, not just education. But we do really concentrate on literacy,” said Creative Adventures owner Christy Hanson.

Hanson, 40, has changed the perception of what some may have of the days of daycare to where her family child care facility better reflects the layout and atmosphere of a classroom. The space is very organized and clean, but flexible during free playtime. Children have routines similar to what they will see in school. And Hanson implements daily hands-on instruction.

“I do a full preschool curriculum so we do lots of different activities. I have a daily lesson plan and some things repeat every week like every Thursday we do alphabet yoga,” Hanson said. “It’s to help them learn letters phonetically but also to do exercise because childhood obesity is a big issue. And they love it. They’re so good at the yoga poses.”

In the entryway above where children hang their winter coats, numerous frames display Hanson’s 13 years of dedication to the profession in terms of training and certification.

The most recent addition to this wall is her four-star Parent Aware rating.

Parent Aware is Minnesota’s latest child care programming available for providers that focuses on getting kids school-ready. It also helps parents who are searching for high-quality child care.

“There’s a big push state-wide for a quality rating improvement system. Many of the school-based programs have already gotten their star ratings, but there’s lesser numbers of family child care providers and centers that have gotten their ratings,” said Teri Steckelberg, early childhood director for Southern Minnesota Initiative Foundation (SMIF).

The quality rating program has been rolling out across southeastern Minnesota since 2012, Steckelberg said, starting in Brown and Watonwan counties.

It’s gone out to a few counties each year for the last three years, including Mower and Steele when just last February through April initial trainings were held in Austin and Owatonna for providers. This summer Parent Aware was introduced to Faribault and Martin counties, and grants recently came in to continue with Houston and Fillmore.

Come 2015, Parent Aware will “totally roll out to all counties across the state,” she said, but “there’s still a huge number of providers that haven’t even heard of [Parent Aware].”

The program is fairly new, and that is shown in the lack of providers who have so far volunteered to be a part of the program and training.

Only seven, including Hanson, have participated in the program to receive their four-star rating, and two providers are in progress of receiving their rating.

A total of 90 child care providers in Owatonna have yet to volunteer to be apart of Parent Aware.

“As Parent Aware does roll out more in Steele County we’ll have more information as how they will engage people here,” said Tracy Ruiter, child care licenser with children services in Steele County. “At this point in time it’s been pretty limited.

We just don’t have a lot of experience with it here yet. A lot of our providers are waiting to hear more.”

Ruiter was under the impression that Parent Aware hadn’t “officially started here yet. It’s pretty darn new.” She also said the county isn't affiliated with the program, but the county does encourage quality training.

The reason for the lack of interest or reluctance from providers to sign on has to do with skepticism and lack of knowledge in the program, Steckelberg said.

“A lot of them think it's just another mandate from the state telling them how they should run their business. They're going to wait and see if it sticks around. They push back,” she said. “A lot of them need to be educated on exactly what is quality and what does it look like in family child care or center.”

She said one of the challenges with Parent Aware, especially with rural providers, is there are lots of providers that have huge waiting lists which the providers then interpret as doing a good job — which may be the case — but often times this just means there’s a lack of child care in the area.

Julie Rohrig, chairperson for the Steele County Child Care Association, echoes such reasoning for not signing on for Parent Aware.

“We probably don’t know enough about it, but we’re not necessarily thinking it’s worthwhile to have in Owatonna,” Rohrig said. “It’s a lot of work, attending a lot of classes with a lot of hours involved. None of us are hurting for kids, so what’s the point of having a rating?”

Rohrig, who runs her own family child care business, said there’s nothing wrong with getting “further education,” but Parent Aware seems a little “overwhelming” and expensive, although she is aware grants are now available for providers to take classes for free.

“At this point most of us are thinking it’s just another one of those things they’re putting in place. This isn’t the first time they’ve done something like this. It’s about the third bandwagon that’s come around. So we haven’t really jumped on the bandwagon yet,” she said.

There are already many other programs in place that provide training and certification for child care providers.

Some of those include the Minnesota Child Care Credential (MNCCC) through Child Care Aware, a partner with the new Parent Aware program along with First Children’s Finance. There are also Care Courses and National Child Development Associate (CDA) as well as the Child Care Professional (CCP) certificate.

Hanson, who is also a board member on the association, said the program isn’t a fad and if she can do it as a mother of four — two of whom were diagnosed with Crohn's disease in recent years — anyone can do it.

“I have mixed feelings about [Parent Aware] but the difference with this is the president is really pushing it. He wants us to achieve these best practices,” she said. “[Parent Aware] is here to stay.”

As a result of the bipartisan agreement that requires federally subsidized child care providers to conduct criminal background checks and undergo a yearly inspection, “our kids are getting the best possible education,” Obama said, plus giving working parents more peace of mind.

But Hanson also notes the downfall with the new star rating system.

She mentors other providers through the Minnesota Licensed Family Child Care Association (MLFCCA) and has come to find some four star-rated providers really shouldn’t be given that high of rating.

She also said there’s “no one double-checking” family child care once those ratings are given.

Because she worked hard to attain her four-star rating, she wants those efforts to be consistent across the board.

The push for quality is to focus on all children being kindergarten- and school-ready.

Steckelberg said 50 percent to 60 percent of children are ready for kindergarten, but that still means a comparable population is not.

She also said that 78 percent of households have both parents working outside of the home, so there are a “huge number of children that are in child care for a majority of their day.”

“We know by research that the higher quality of environment that they’re in the better prepared that they are for kindergarten,” Steckelberg said. “That’s kind of behind this whole thing.”

With all the curriculum and preschool-based learning, Hanson said the kids in her care “already know how to be a student and that makes it easier for the kindergarten teachers in this area.”

The program’s other main goal is to help parents choose quality care best fit for their child.

“It is a tool that’s going to help parents but it certainly isn’t going to replace that gut feeling or face-to-face interview,” Hanson said. “But it does help and I think that's really important for parents when looking for care for their child.”

Of those providers enrolled in Parent Aware, some may decide to only go for that one-star rating. That means they’re still on board with making improvements, but maybe they don’t want to have their center so focused on school readiness.

“As a parent you need to see what you’re wanting. Some centers are a little more school-ish, some at-home have more sibling aspects, some are very small so it’s a chance to go see ‘grandma and grandpa’ in a way,” Rohrig said. “You as the parent need to determine what you want.”

Hanson agrees with this notion and says that even if a provider is four-star rated, that type of care may not “mesh” with what the parents wants.

“When I interview a parent, it's really important to me that we have the same goals and we’re like-minded,” she said. “Their child may be happy here but it’s also important that the parent is happy. They need to go where they’re most comfortable, be it a one-star or four. Every parent is so different in how they want their child raised.”

The Associated Press contributed to this story.

Reaching for the stars

• To earn a one star rating, providers have shown that they've introduced basic best practices to prepare kids for kindergarten. One star shows commitment to continual improvement and the children.

• To earn a two star rating, providers have shown they are actively using many best practices, such as planning daily activities for kids and your own professional growth.

• To earn three star rating, providers are using “most best“practices like conducting child assessments throughout the year and documenting training and aligning that with the Minnesota Early Childhood Indicators of Progress (ECIP). You must first meet all one and two star rating requirements to get three.

• To earn a four star rating, providers are excelling in the use of “most best” practices in preparing kids for kindergarten. Programs earning a four star show they’re equipped to offer the very best quality care.

The star rating the provider is applying for has to be submitted to the Minnesota Department of Human Service and the state with either approve or deny the providers request, Steckelberg said.

The final step is getting your rating, and that is active for two years before it needs to be renewed.

More information can be found at http://parentawareratings.org/