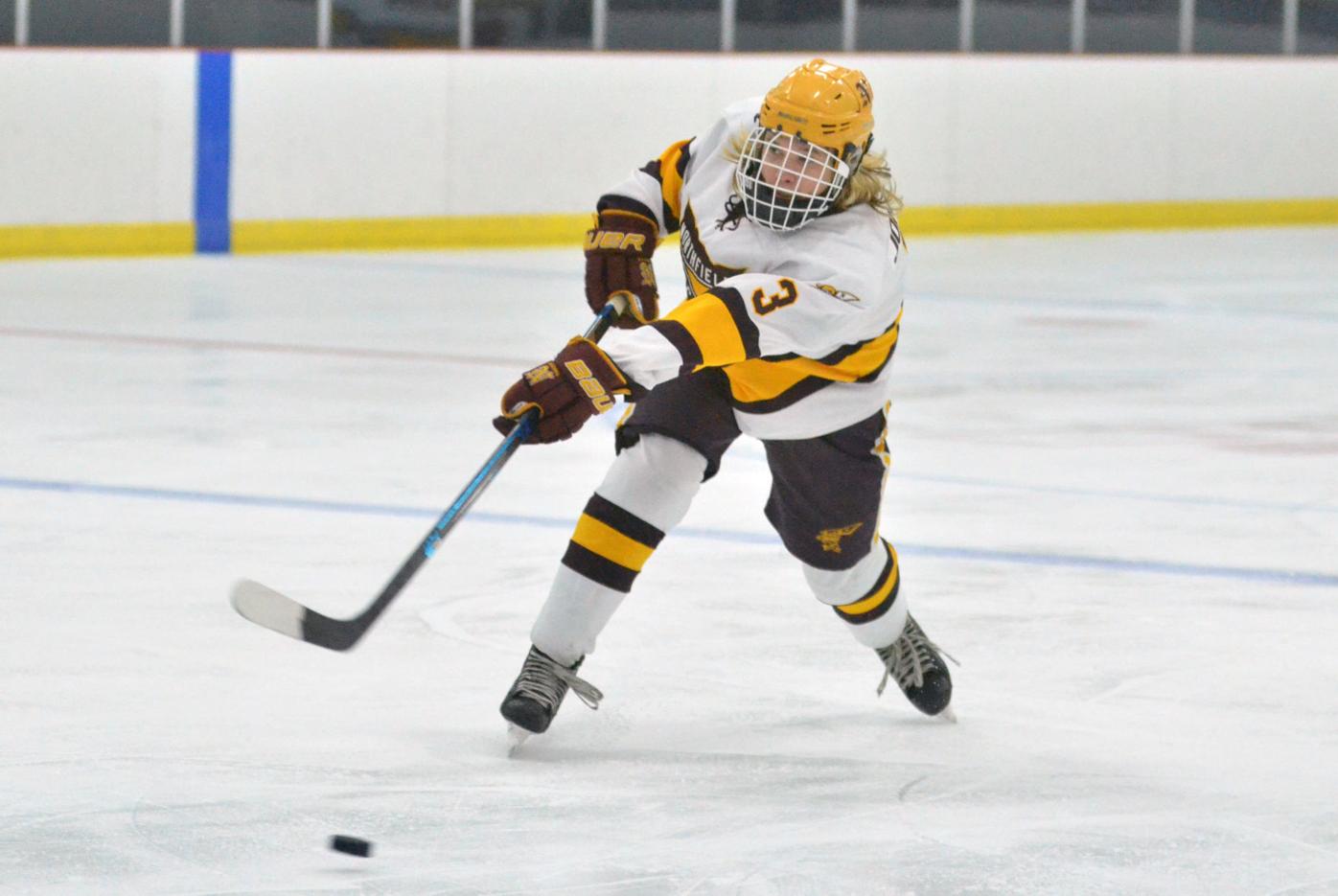 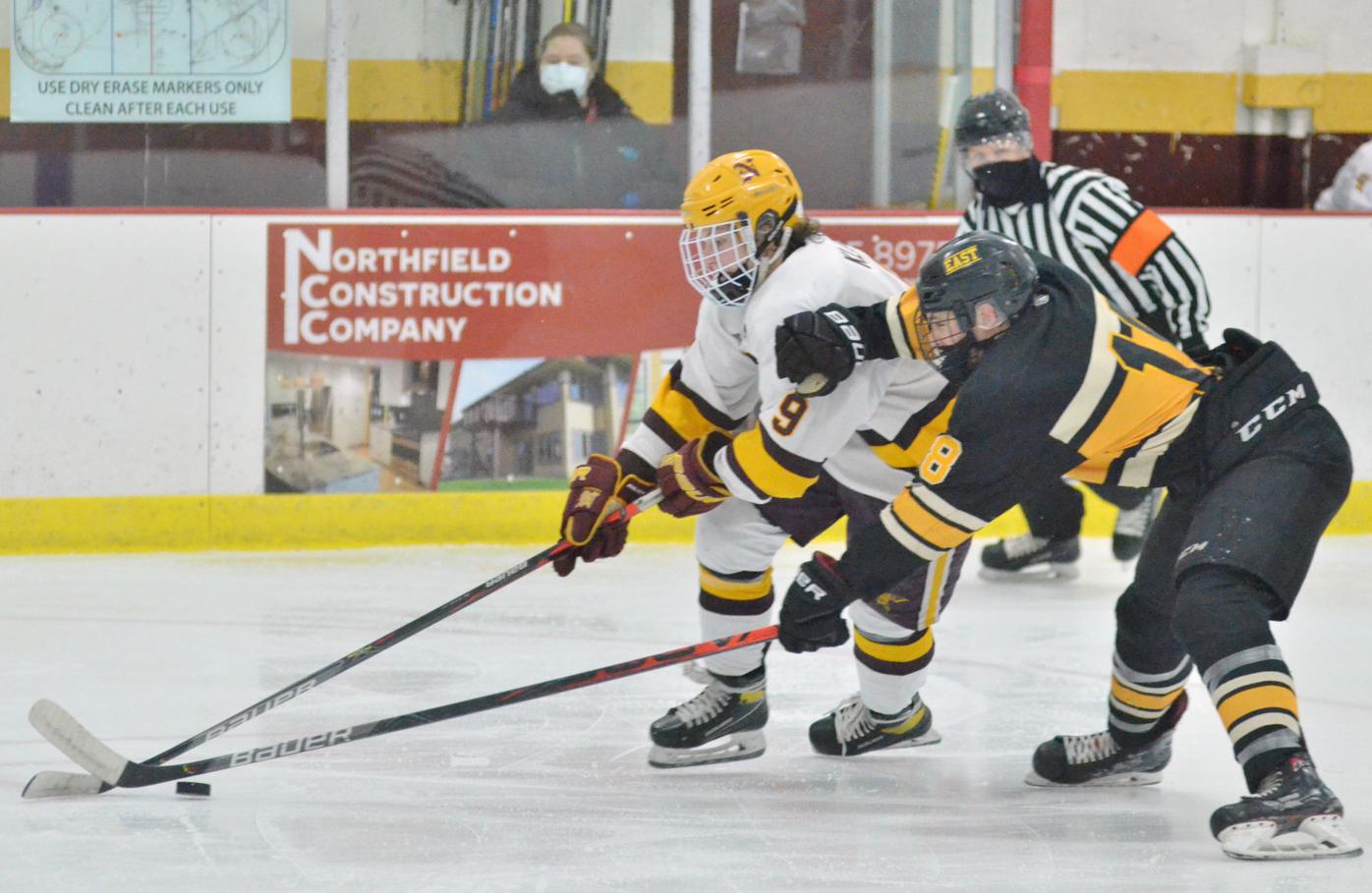 An efficient effort from inside the 3-point arc powered Northfield (6-4) to a 59-43 victory Friday night at home against Red Wing (1-9).

The Wingers shot an identical 4 of 18 from 3-point range, but made just 12 of 28 two-pointers and attempted inly 11 free throws.

Leading that efficient attack was senior Anders Larson, who finished with 13 points and made 4 of 7 field goals and 4 of 6 free throws. Senior Kip Schetnan and junior Tate Sand both added 10 points, while senior Luke Labenski provided nine points.

Schetnan and Labenski both tied for the team lead in assists with four, while Labenski and Larson each pulled down a team-high eight rebounds apiece.

Northfield next travels Tuesday to play at Owatonna (9-2).

Northfield (7-3-1) came out on the wrong end of a high-scoring affair Saturday afternoon at Northfield Ice Arena, where Mankato East (9-2) surged to a 6-4 victory.

The Cougars scored an empty-net goal with 5 seconds remaining to wrap up the win and avenge their only Big 9 loss when the Raiders won 3-2 in Mankato.

After Mankato East ended the first period with a 3-1 lead, Northfield fought back with freshman Cayden Monson's tip goal 2 minutes, 45 seconds into the second period and Davis Royle backdoor tap-in off a pass from Carson VanZuilen 17 seconds later.

Seven seconds after those two goals, the Cougars were assessed a five-minute boarding penalty, providing an extended man advantage for the Raiders to potentially take a lead.

Instead, Mankato East scored shorthanded and locked down Northfield's power play to finish the major penalty with a 4-3 advantage. The Cougars ended the second period leading 5-3.

The Raiders controlled play throughout the third period, garnering a 15-4 shot advantage and trimming the deficit to 5-4 with 12 minutes left on Will Tidona's goal. The game-tying goal never came, however.

A pair of goals from senior forward Mya Wesling lifted Northfield (9-0) to a 3-1 victory Saturday afternoon at Mankato East. (6-3-1)

Sophomore Tove Sorenson put the Raiders on top 1-0 with her first-period goal, before Wesling's first tally made it 2-0 with four minutes left in the second period.

After Mankato East trimmed the lead to 2-1 in the third, Wesling scored again to push the advantage back to two goals.

Freshman Ayla Puppe assisted on both of Wesling's goals, while freshman Emerson Garlie picked up an assist on Sorenson's tally.

Northfield finished with a 33-17 advantage in shots, and next plays Thursday night at Mankato West (2-9).

Senior Adison Dack won the all-around competition Saturday at Owatonna, but the Raiders were unable to claim a team victory with the Huskies surging to a 140.575-137.025 win.

Dack was the top-scoring gymnast on floor, vault and beam, while she finished second on bars to total 37.000 points. Owatonna claimed the next three spots in the all-around, however, and finished with the top team score in each of the four disciplines.

Other individual highlights for the Raiders included Sidney Petersen finishing third on beam and fifth on floor, and Paige Mier snagging fourth on vault.

Northfield now enters an extended break, as it is not scheduled to compete again until a home meet against Faribault on Wednesday, March 3.