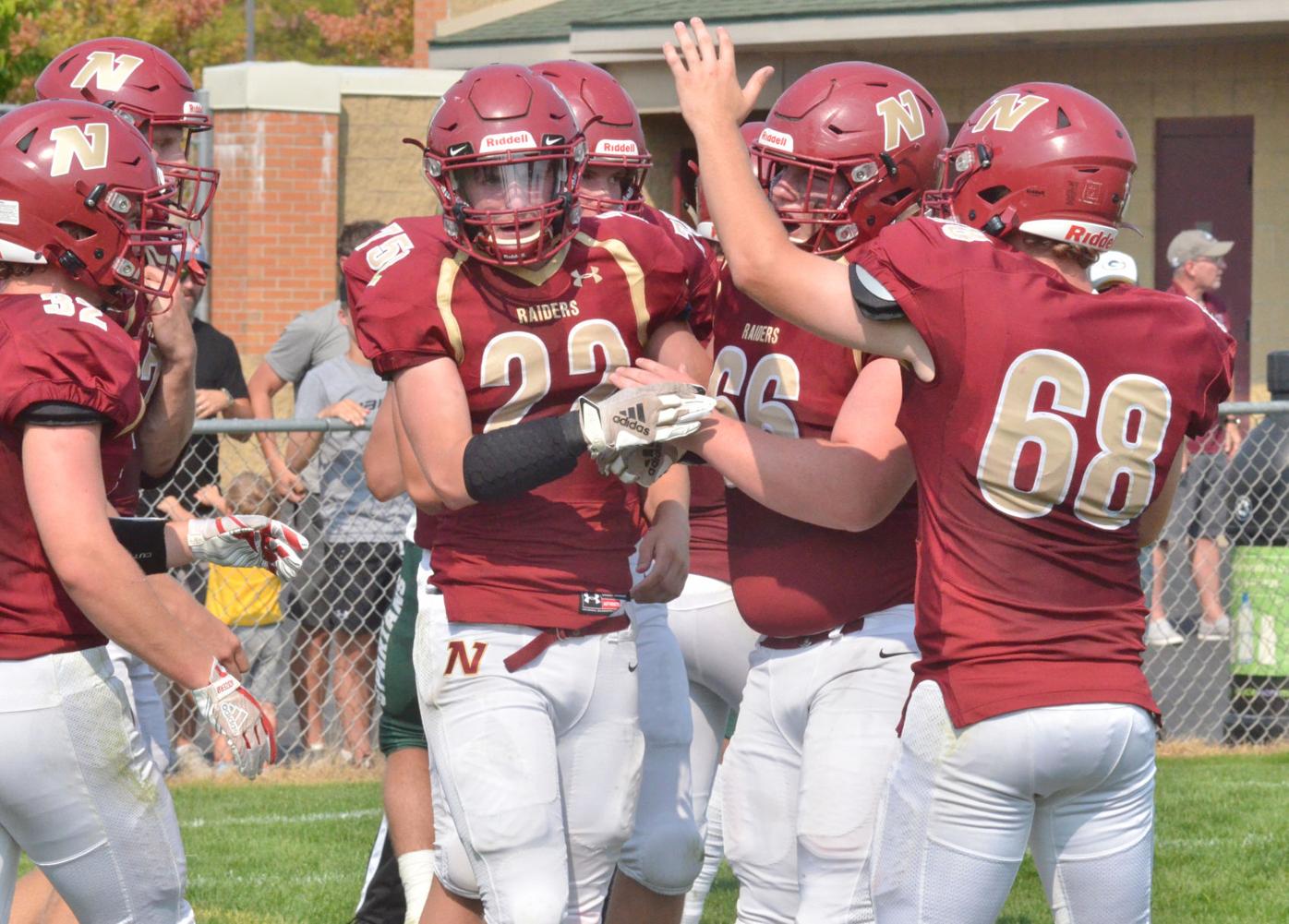 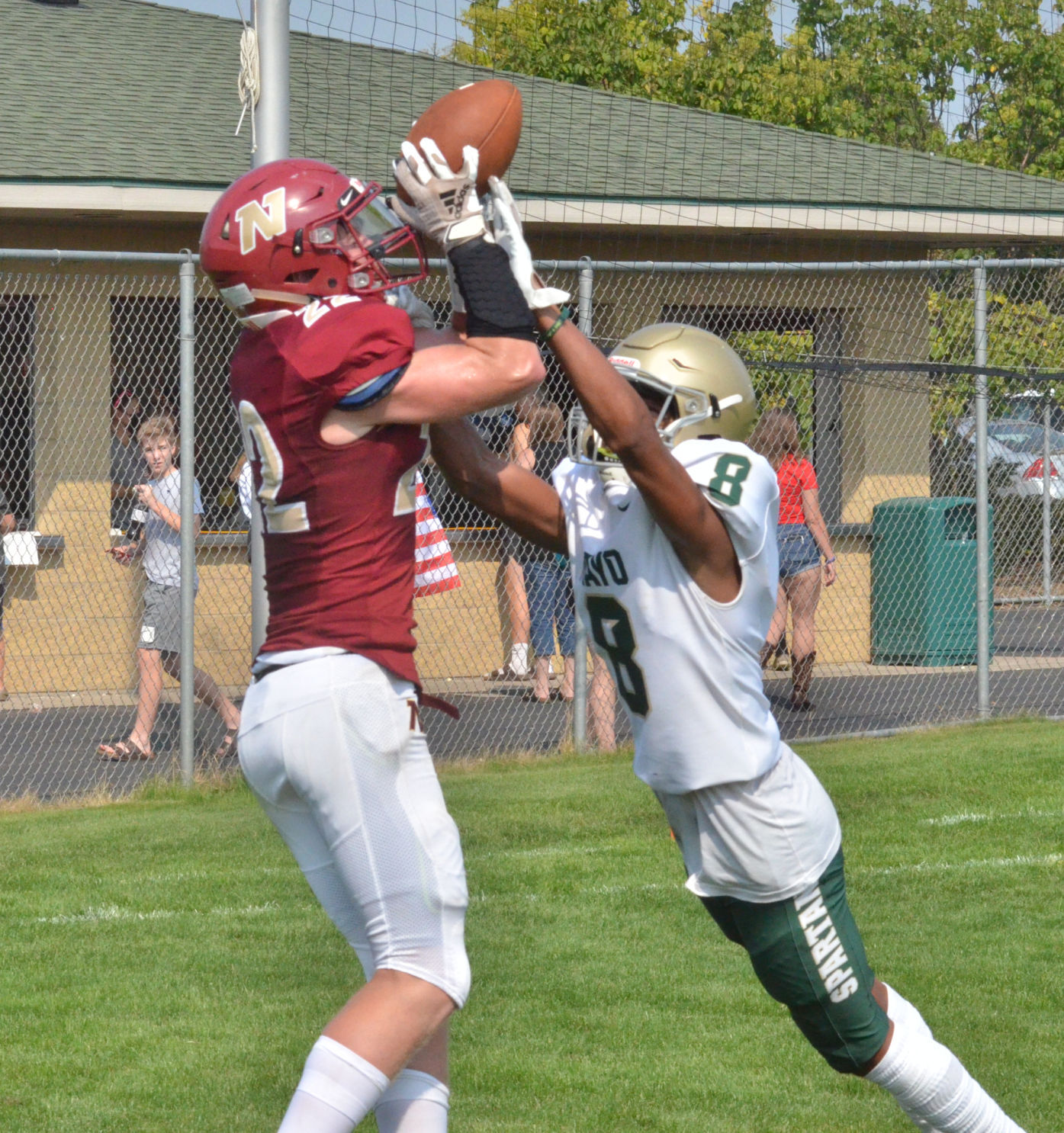 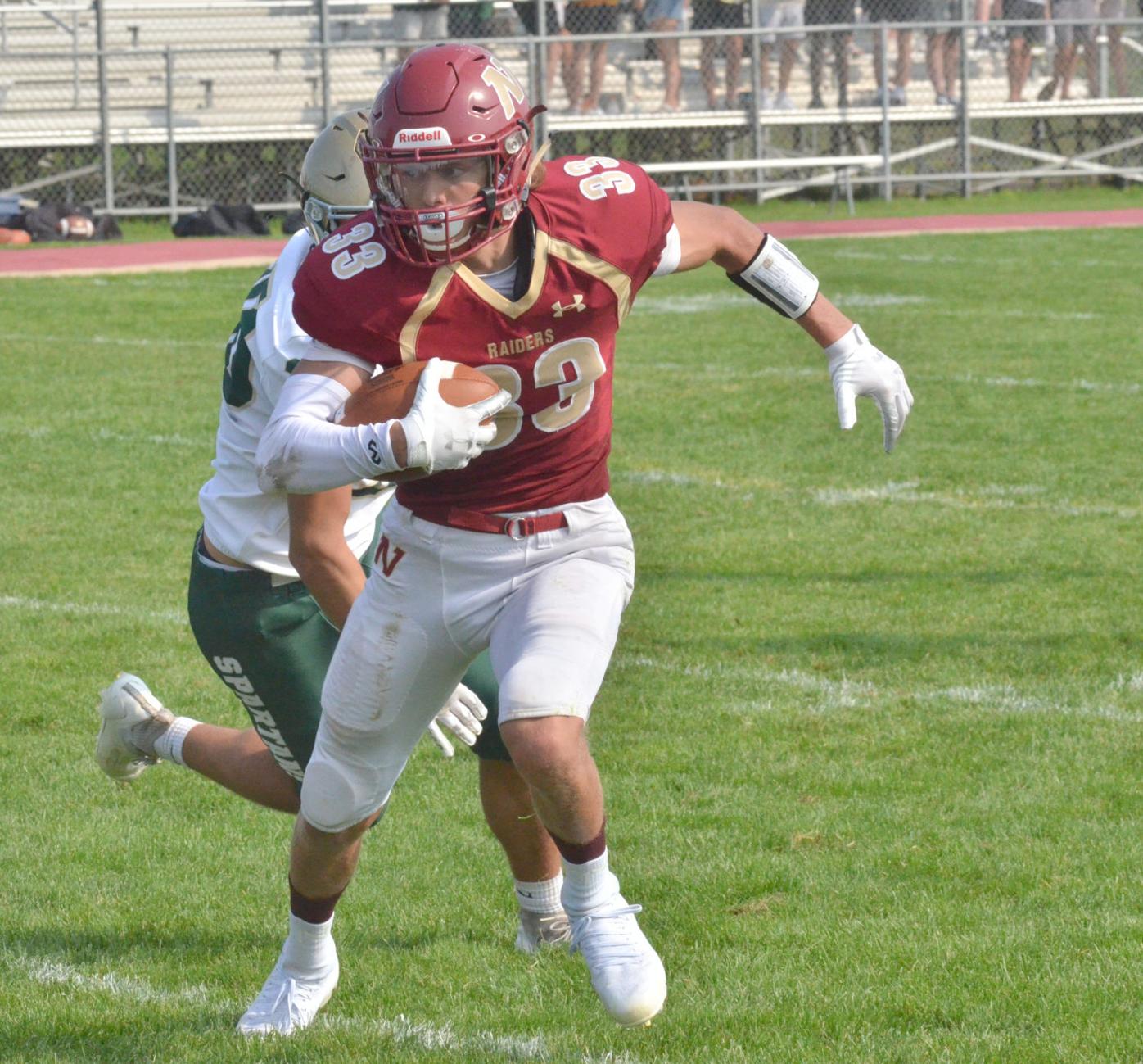 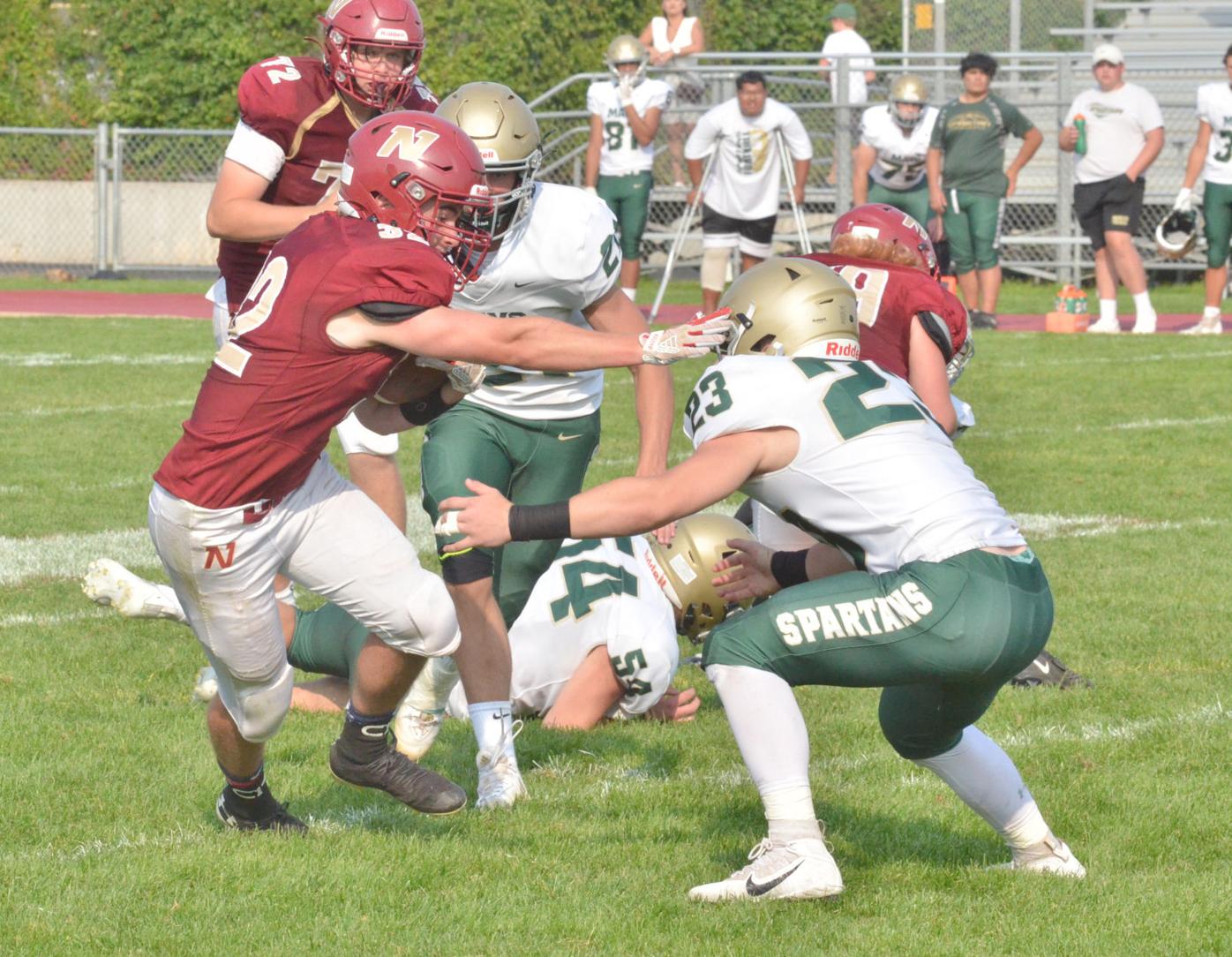 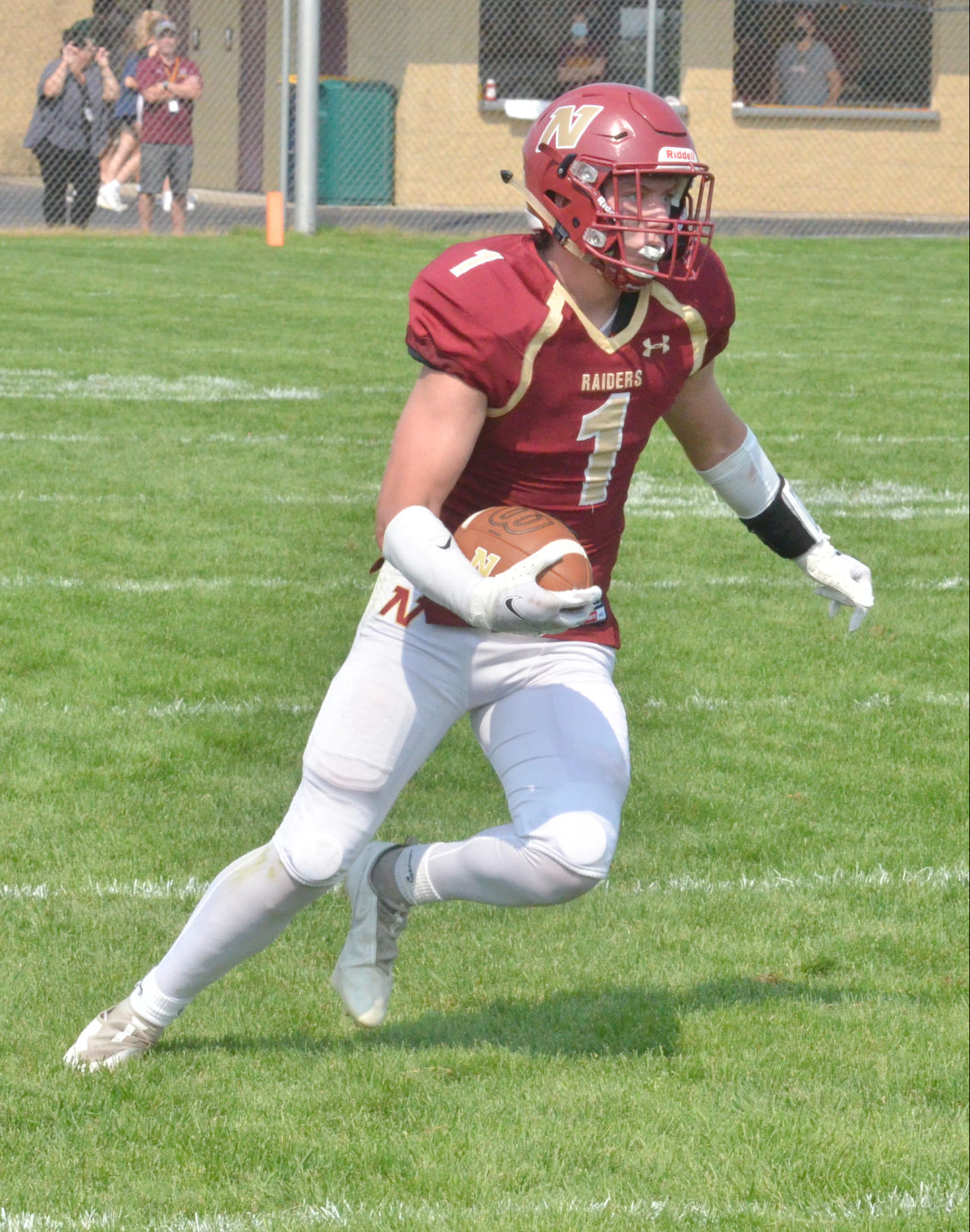 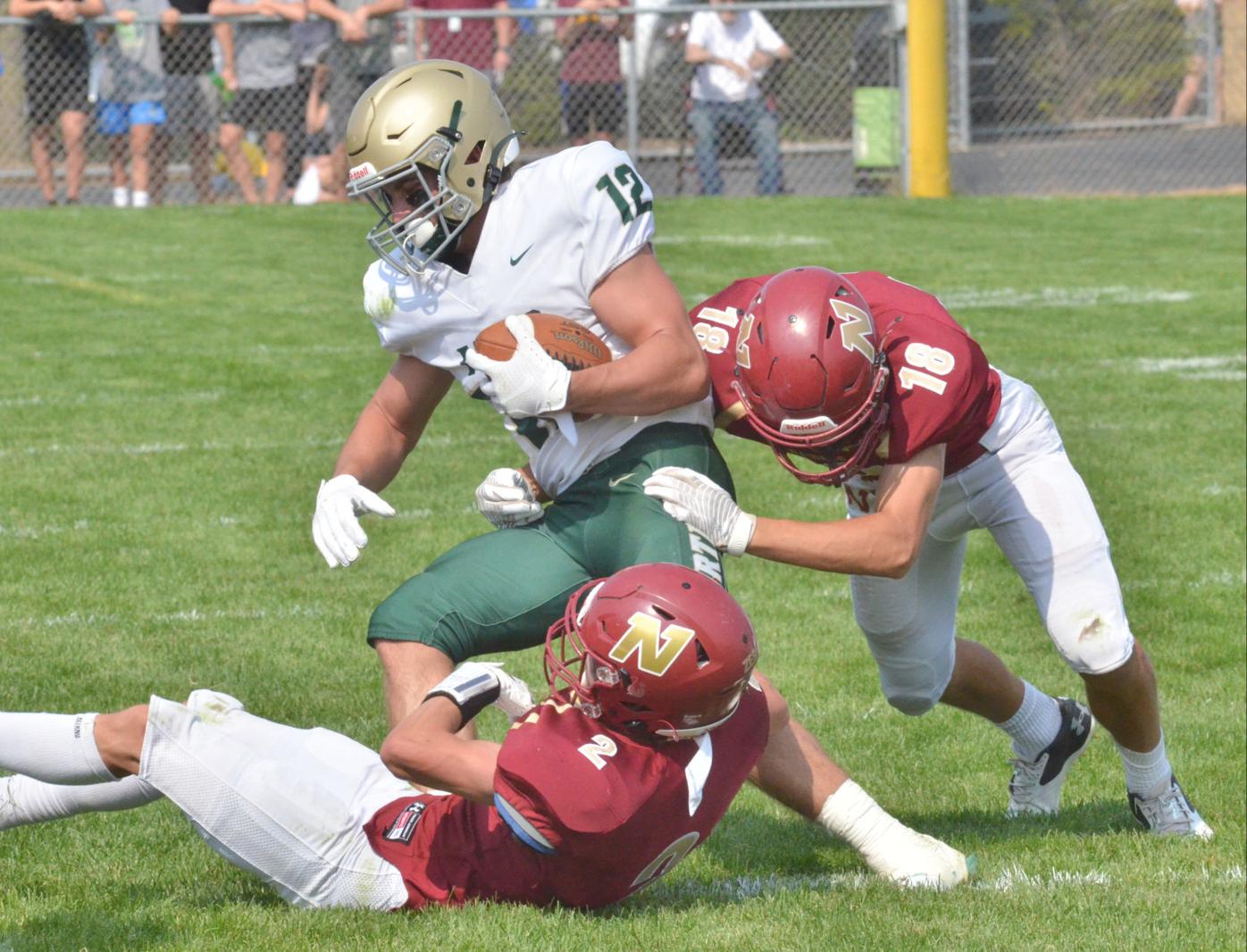 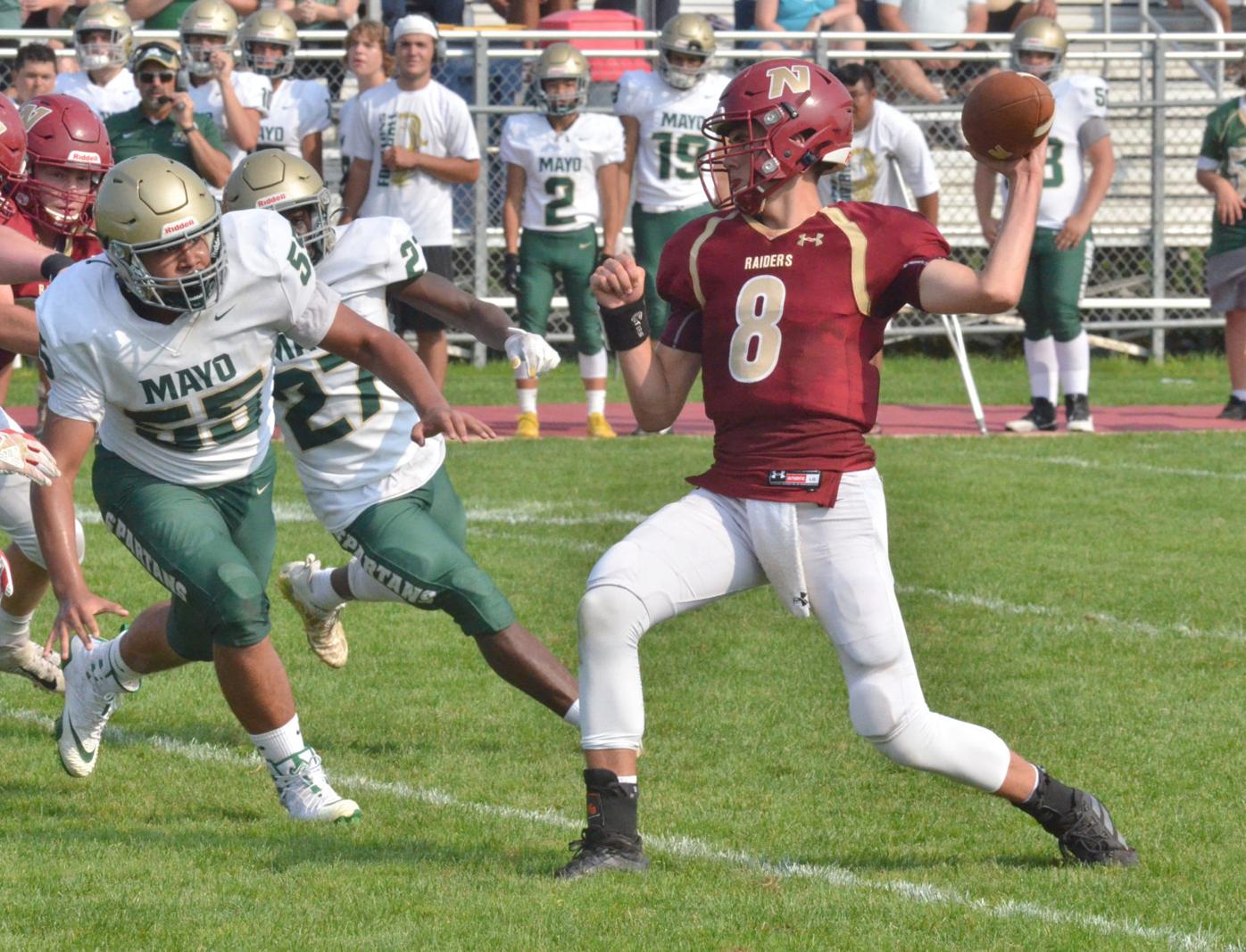 Northfield junior quarterback Soren Richardson prepares to throw the ball during Saturday’s 49-22 loss against Rochester Mayo in Northfield. Richardson completed 10 of 19 passes for 180 yards, a touchdown and an interception. (Michael Hughes/southernminn.com) 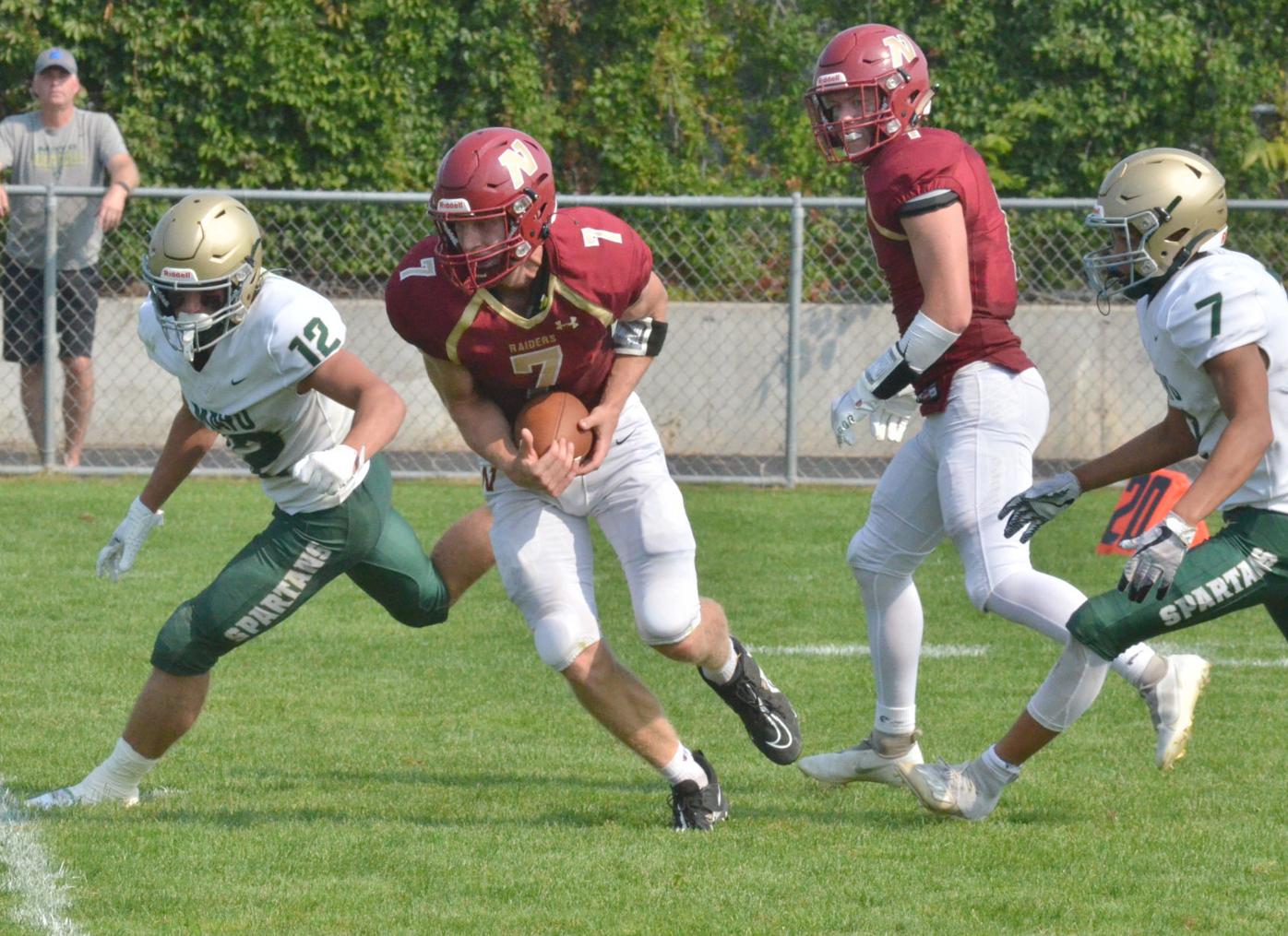 Northfield junior quarterback Soren Richardson prepares to throw the ball during Saturday’s 49-22 loss against Rochester Mayo in Northfield. Richardson completed 10 of 19 passes for 180 yards, a touchdown and an interception. (Michael Hughes/southernminn.com)

Against the favorite to win the Section 1-5A title in November, the Northfield football team traded punches with Rochester Mayo, but surrendered too many explosive plays to the Spartans in a 49-22 defeat Saturday afternoon in Northfield.

After Rochester Mayo (2-0) scored on a 68-yard pass on its first play from scrimmage, before it recovered a pooch kick and extended its lead to 14-0 four plays later.

“I couldn’t have been more proud of them, honestly,” Northfield coach Brent Yule said. “The thing I felt like we’ve struggled with in past years has been a physical presence, and we matched their execution with physicality. That’s how we ended up getting turnovers, because good things happen when we run to the ball and hit people. That’s what we preach all the time, and our kids did an awesome job of that.”

On the first play after the second recovered fumble, however, a botched handoff resulted in a fumble the Spartans recovered for a touchdown on the last play of the first quarter.

“We just have to keep swinging, keep fighting and the results will come eventually,” Yule said. “It’s frustrating at times, because I felt like we played right with them at times, but then we gave up way too many big plays defensively. We have to shore some things up on the defensive side of the ball, for sure, and then hang onto the ball on offense and not turn it over.”

From that point forward, though, the Raiders played the Spartans to within one possession.

Junior quarterback Soren Richardson lofted a 23-yard touchdown pass to sophomore Austin Koep on fourth down to cut the lead to 21-7 in the second quarter, before Rochester Mayo scored twice to close the half and extend its lead to 35-7.

In the second half, Northfield put together drives of 10 plays, eight plays and six plays, the last two of which ended with touchdown runs from senior Josh Voight and sophomore Cameron Mellgren. That offensive consistency throughout the game was undone by spates of miscues.

While the Raiders notched 16 first downs compared to 19 for the Spartans, Northfield 3-for-12 across third and fourth downs and committed 13 penalties to halt drives on Rochester Mayo’s side of the field.

“We knew we had a really good opponent coming in with a lot of speed, and they executed,” Yule said. “The message we send our kids every single week, at halftime and before the game started was to not concern ourselves with the outcome, but just how we do it. How we do it is more important than what we do. I was really proud of the way they fought.”

In total, Richardson completed 10 of 19 passes for 180 yards, a touchdown and an interception on the final play of the first half. Collectively, Northfield rushed 34 times for 154 yards, with junior Charlie Monaghan leading the way with eight touches for 47 yards.

Through the air, senior Zach Edwards hauled in five receptions for 94 yards, while senior Tate Journell caught three passes for 43 yards and Koep finished with two catches for 34 yards.

“Austin’s just a sophomore and he’s starting to emerge as a role player for us here,” Yule said. “He’s a big, fast, athletic kid and we can’t have enough of those kids on the football field, and we have to find a way to get him the football. Zach Edwards played great today. He’s a senior, and he’s a big, athletic kid that did a good job of making plays for us.”

Moving forward, Northfield will aim to build off those offensive and defensive successes Friday night at home against Rochester John Marshall (1-1), while also limiting some of the costly, game-breaking mistakes.

“I’m proud of these guys,” Yule said. “I love coaching them, I love being apart of this and I know the fight they have is going to pay dividends here.”