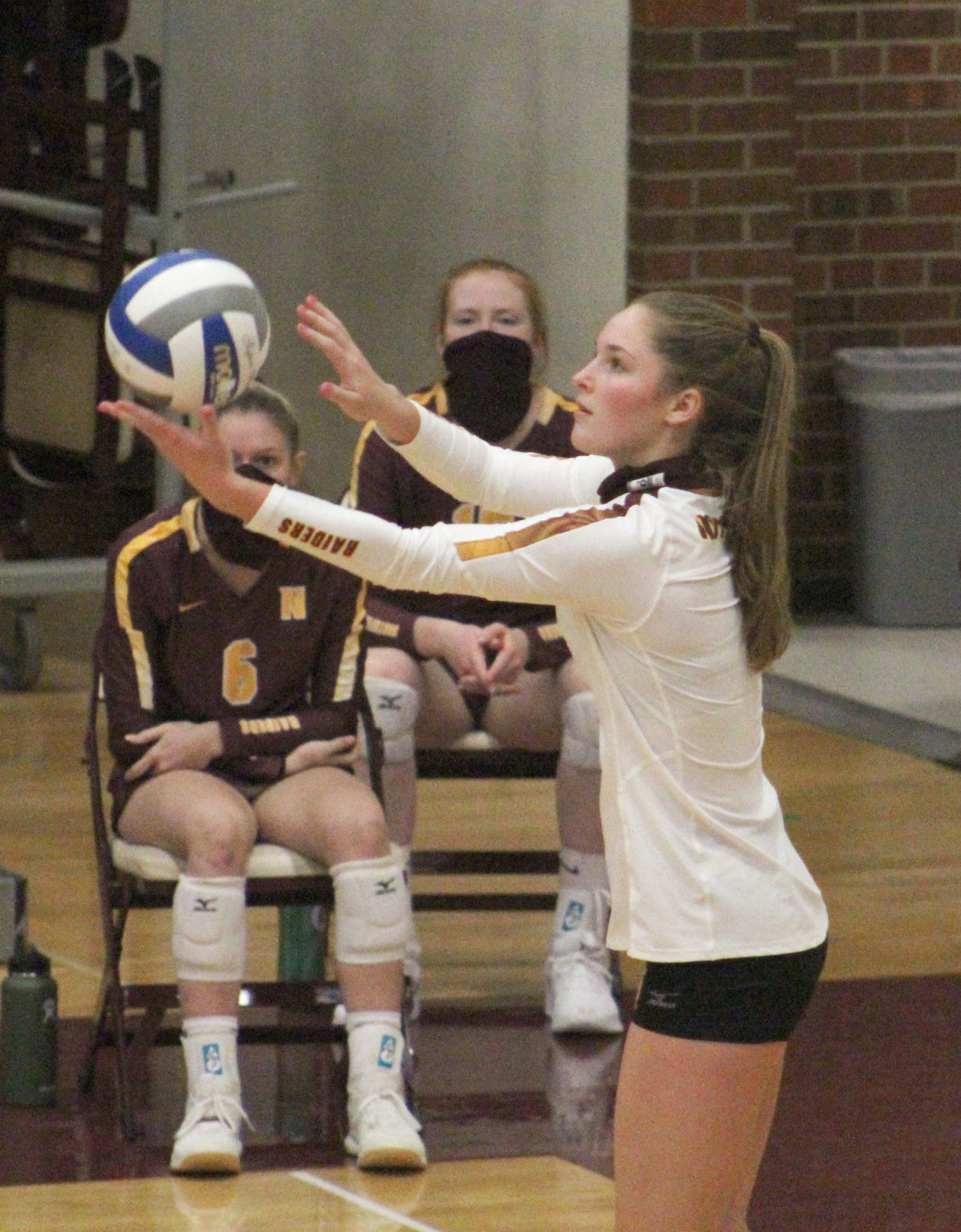 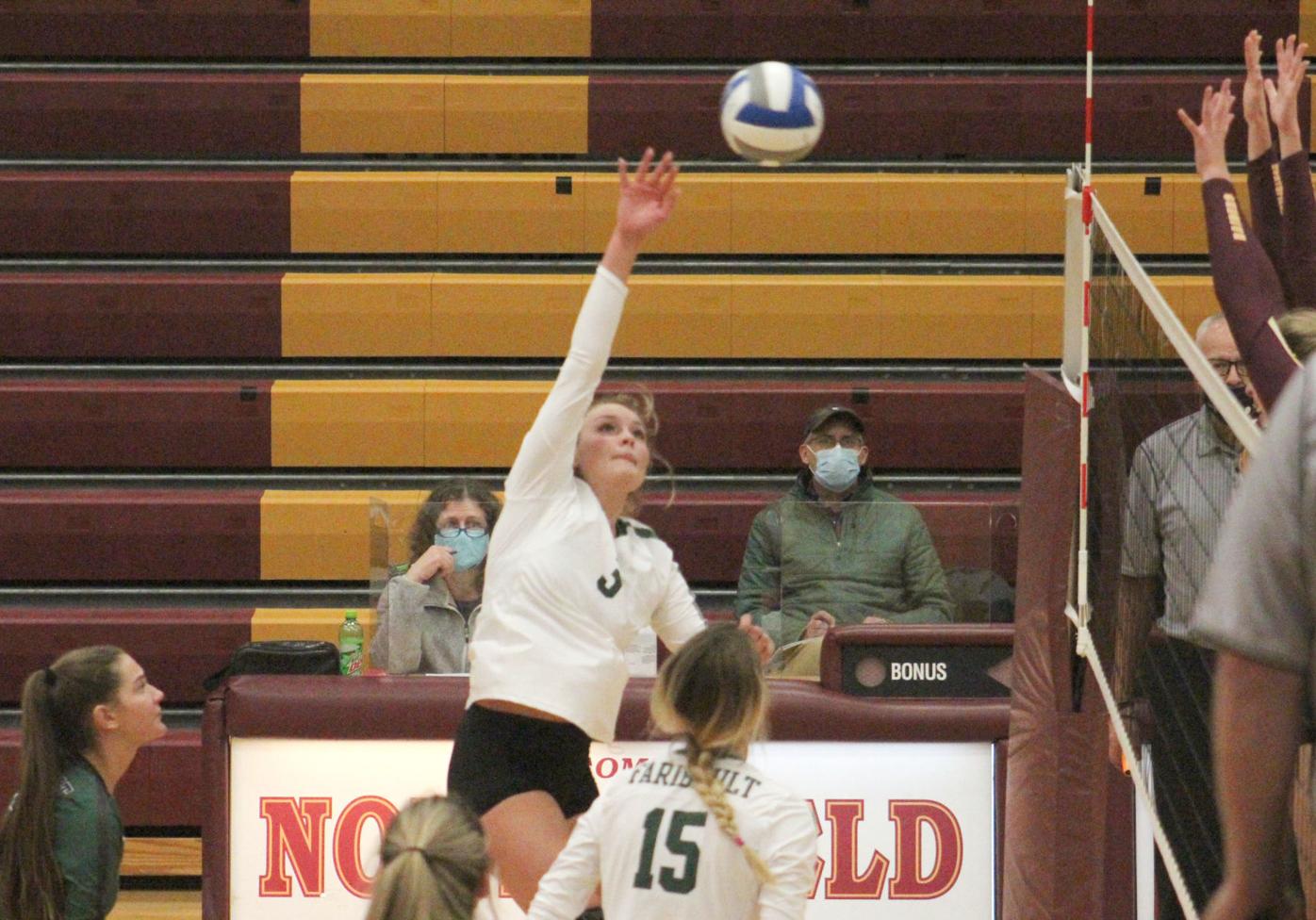 In front of a home crowd, the Northfield volleyball team extended several streaks with a sweep of Faribault.

The win marked the 29th straight sweep of a conference opponent. It also secured the Raiders their fourth straight Big 9 Conference title.

With the season being cut short for both teams, Northfield coach Tim Torstenson said some aspects of the Friday night win mean as much as it would have in an uninterrupted year.

“I think it's been a habit to have the expectation that we're going to win the conference,” Torstenson said. “It's always a goal. It's just hard this year because that's all we have this year as opposed to going to sections or going to state. Once we knew that (a shortened season) was the case, that's what they knew they had to get done.”

Faribault (3-4) played much better than the previous night against Winona and made Northfield work for its points. The only area where the Falcons really struggled was with serve receive, something that played right into the Raiders' strengths.

In the second of three straight days with games, Faribault coach JoAnna Lane said there was some rust Thursday. Despite the loss Friday, the Falcons were much more aggressive and sure of their hits and passes.

“I would rather lose against a good team like this, playing hard and getting better by playing better competition, than like last night's loss,” Lane said. “Even though we lost, we played a lot crisper.”

Leading by a few points early in the second set, senior libero Emma Torstenson rattled off three consecutive aces to quickly pull ahead 7-2. It propelled the Raiders in the second set to the largest margin of victory in the three sets.

The Raiders recorded most of their nine aces with accurate serves, and not so much power serving.

“We pick good places to serve where we think teams might be struggling and we continue to serve in that spot,” Tim Torstenson said.

When Northfield wasn't picking up aces, they finished points with Jaynes and senior Megan Reilly.

“We just couldn't get a lot going with our middle hitters,” Tim Torstenson said of Faribault's efforts to take away the middle. “We have two of the best outside hitters in the state...If other parts of our game aren't going the way we want, we give them the ball and the outcome is usually pretty good.”

Jaynes led the way with 15 kills, while Reilly added 12 kills to produce the majority of Northfield's 34 kills, and Timperley dished out 31 assists.

The Falcons remain on the road as they face Red Wing on Saturday afternoon for the last of three straight matches. Lane said the team may pack their schedule next week by adding a game Monday, in addition to the already scheduled home game against Northfield on Tuesday, before the school begins distance-learning Thursday, Nov. 19.

Torstenson said the game against Owatonna, originally on Thursday, Nov. 19 was moved to Wednesday, Nov. 18, to get one last match in before they too move to distance-learning.

While disappointing to end the season short, Torstenson said with the conference wrapped up, it’s all about trying to have fun and enjoy the final two games.

Lane added it’s tough with no practices, but just as tough that the season ends by the time there might be days to practice.

“It stinks a little bit because we're struggling on blocking,” Lane said. “Well, I don't get a chance to come in and show exactly what I need or what I'm saying. We have to do it off the court, on the bus rides, or in our huddles.”