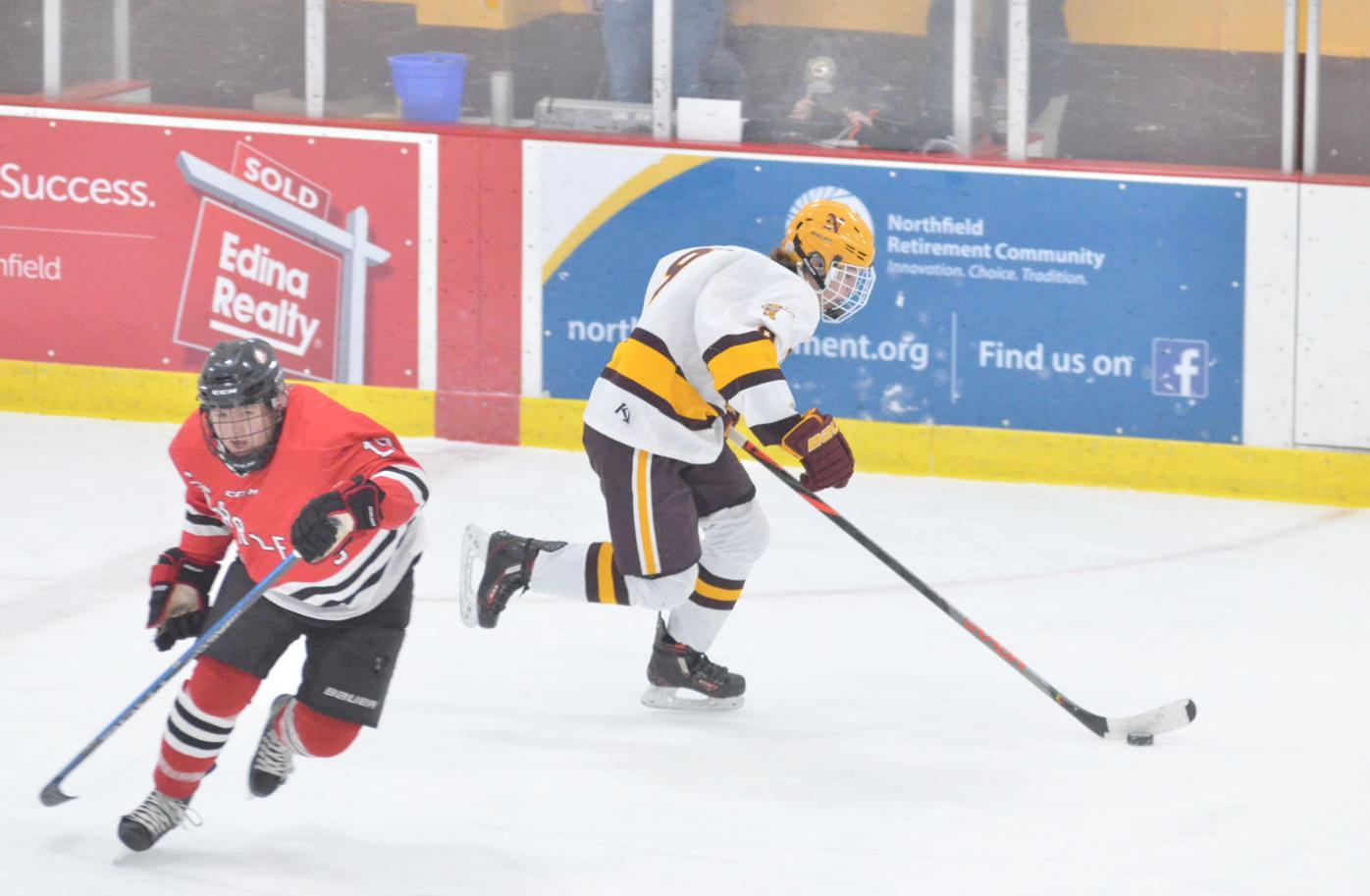 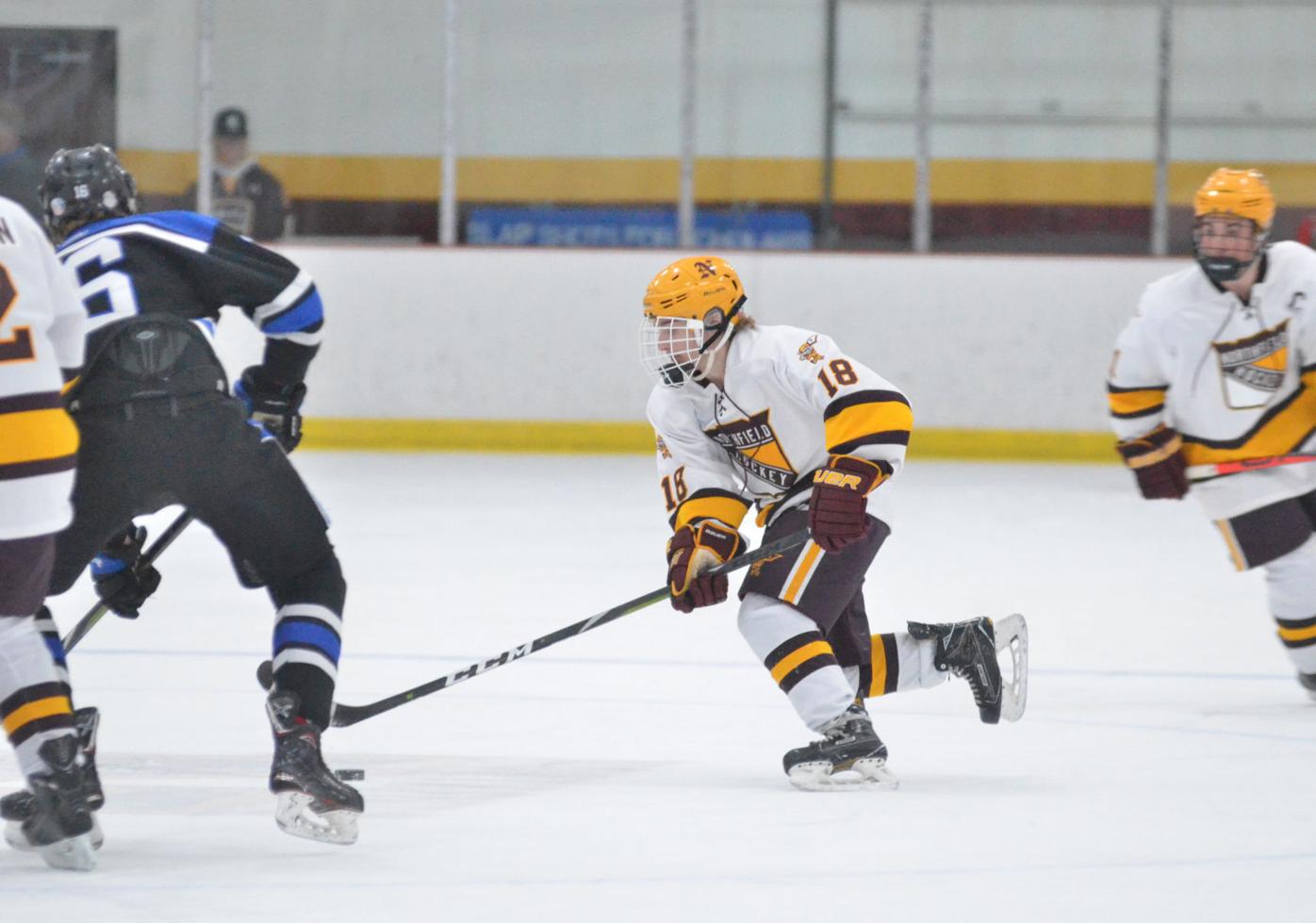 Northfield senior Davis Royle, pictured last season, is one of three senior defensemen back this year for the Raiders. (File Photo/southernminn.com)

When the Northfield boys hockey team takes the ice for its first game this season, Mike Luckraft will do something he’s never done before.

The Raider boys hockey coach will start the season without a goalie who has started a varsity game. Last year, senior Cal Frank started all 25 games last season for Northfield and has since graduated.

Micah Olson, a senior this year, played one period and recorded five saves in an 8-1 win against Austin, and will enter the year as the most experienced goalie for the Raiders. He’ll be joined in competition for the starting job alongside junior Elliott Piker, last year’s junior varsity goalie, and a pair of sophomores who played bantam hockey last year.

“That’s a challenge,” Luckraft said. “That’s one luxury we’ve had, is having that experience in such a critical role and such a critical part of high school hockey. Having strong D-men is going to be a big asset to a goalie starting in that role.

“The bantam team had some success last year and good goaltending was part of that,” Luckraft continued. “I know that Elliott Piker, the JV goalie last year, he did well, so Elliott will compete for some minutes and both the kids that were bantam-level guys will compete for minutes. Micah will have to play well and I expect that he will. He’ll be the senior.”

The defensive corps contains plenty of experience, with seniors Josh Kruger, Isak Johnson and Davis Royle all back this season. Junior Matthew DeBuse also played regularly as the team’s fifth defenseman last year, while junior Allan Royle and sophomore Michael Fossum will also be in the mix for playing time this year.

"Owatonna and Northfield had a pretty good rivalry through youth hockey with this graduating class and we've had good games with them. We had a one-goal game and an overtime game with them last year. I think Century, until they're knocked off would have to still be the favorite and then you look at Owatonna and Northfield. Faribault will compete, they've got some talent.

"The one team we played in the bridge season that really looked good was Mankato East with Layton Liffrig coming back. Layton looked really good and might be the best forward in the conference. He looked incredible, fast, big and great with the puck and Mankato (East) has a nice team.

"It's a deeper conference this year, and I don't think Century has lost a game in the conference in a couple years. I would expect that there would be four or five teams between Owatonna, Mankato East, Mankato West, and Century that would all compete right at the top."

That defensive depth might allow Northfield to move Davis Royle up into a forward position.

“It’s a unique situation where last year the numbers were so limiting and kids got forced into certain roles, and this year there’s some flexibility to move kids around,” Luckraft said. “Davis, we put him at defenseman last year out of just sheer need. We need good-skating, puck-moving players at the side of the ice and he jumped in.”

The Raiders return both their top scorers from last year with senior Carson VanZuilen (15 goals, 38 assists in 24 games) and junior Spencer Klotz (28 goals, 22 assists in 25 games).

Overall, nine of Northfield’s top 11 scorers from last year are back this season, but Luckraft said he’s hoping for a more equitable offensive attack that isn’t as reliant on VanZuilen and Klotz.

Last year’s second forward line of now-seniors Will Tidona (5 goals, 16 assists), Ryan Will (9 goals, 8 assists) and Bohde Hasse (6 goals, 5 assists) returns in tact, although there is a hole on the first line at wing, where since-graduate Teague Nelson played last year.

“That’ll be our challenge, to figure out what will be the right fit of players around Carson and Spencer,” Luckraft said. “Will Tidona is a four-year high school guy and three-year varsity guy that’s another center. Spencer’s natural position is center and of course Carson is a center. Ryan Will comes back at forward, Bohde Hasse comes back at forward, so there’s some guys coming back that have played significant minutes in a regular varsity role.”

Overall, it’s an experienced group that may receive a further shot of depth from a few players who started the year playing for the bantam team, but may shift into the high school program once the season starts since there are enough numbers to support a full junior varsity team, unlike last season.

With that, and the potential of top players from other Section 1AA teams to instead play junior hockey this year, Luckraft believes his team might have a chance to challenge for not only the top of the Big 9 Conference, but also the section.

“We could be pretty competitive and have a chance to do well, especially in the Big 9 Conference,” Luckraft said. “Who knows with this crazy year, and it seems like some other schools have kids leaving, so maybe there’s an opportunity in the section, which has always been a bit of a big uphill climb for us.”

Last year, the Raiders tallied a record of 15-9 and finished in third place in the Big 9 before dropping a 5-2 result at Lakeville North in the Section 1AA quarterfinals.