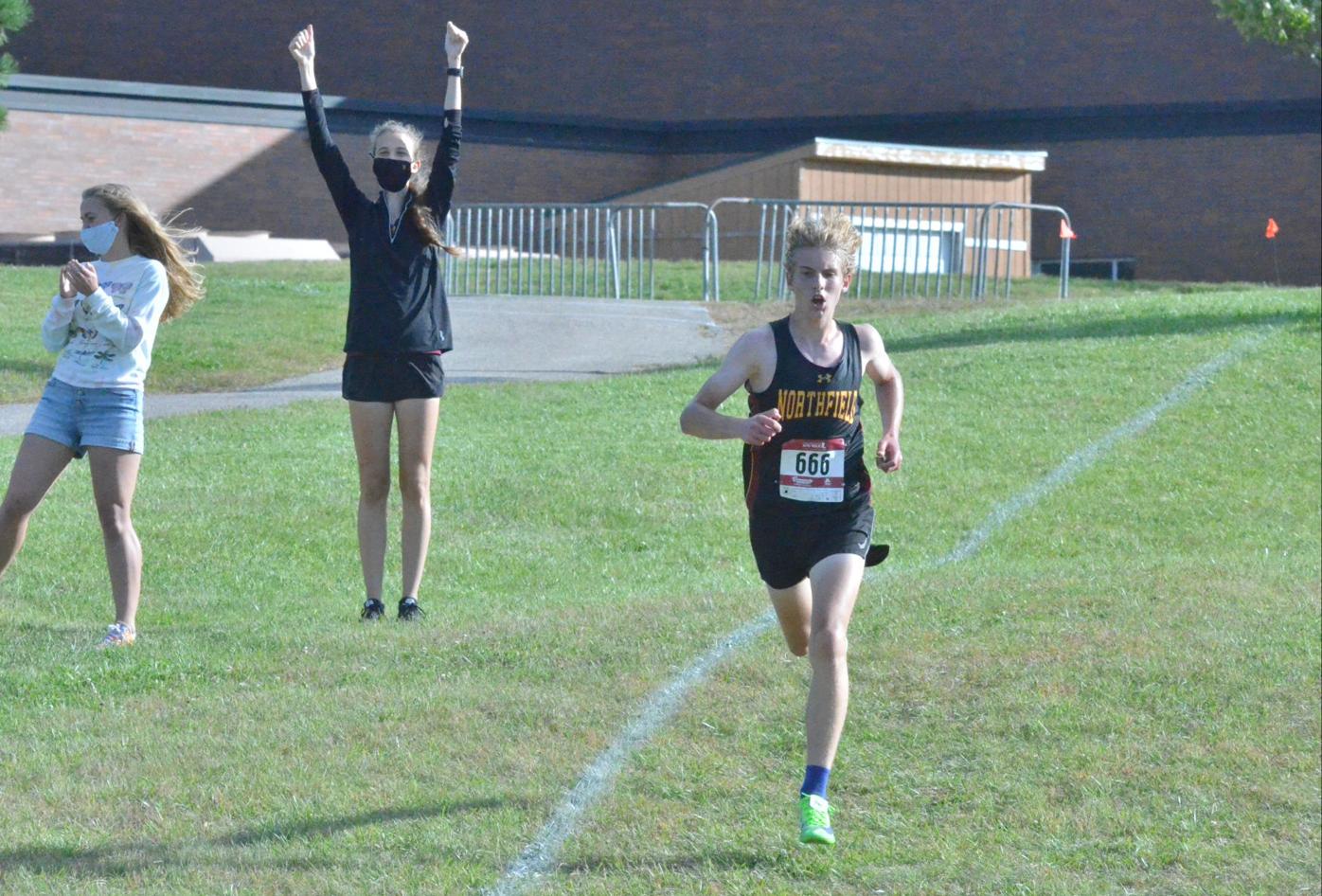 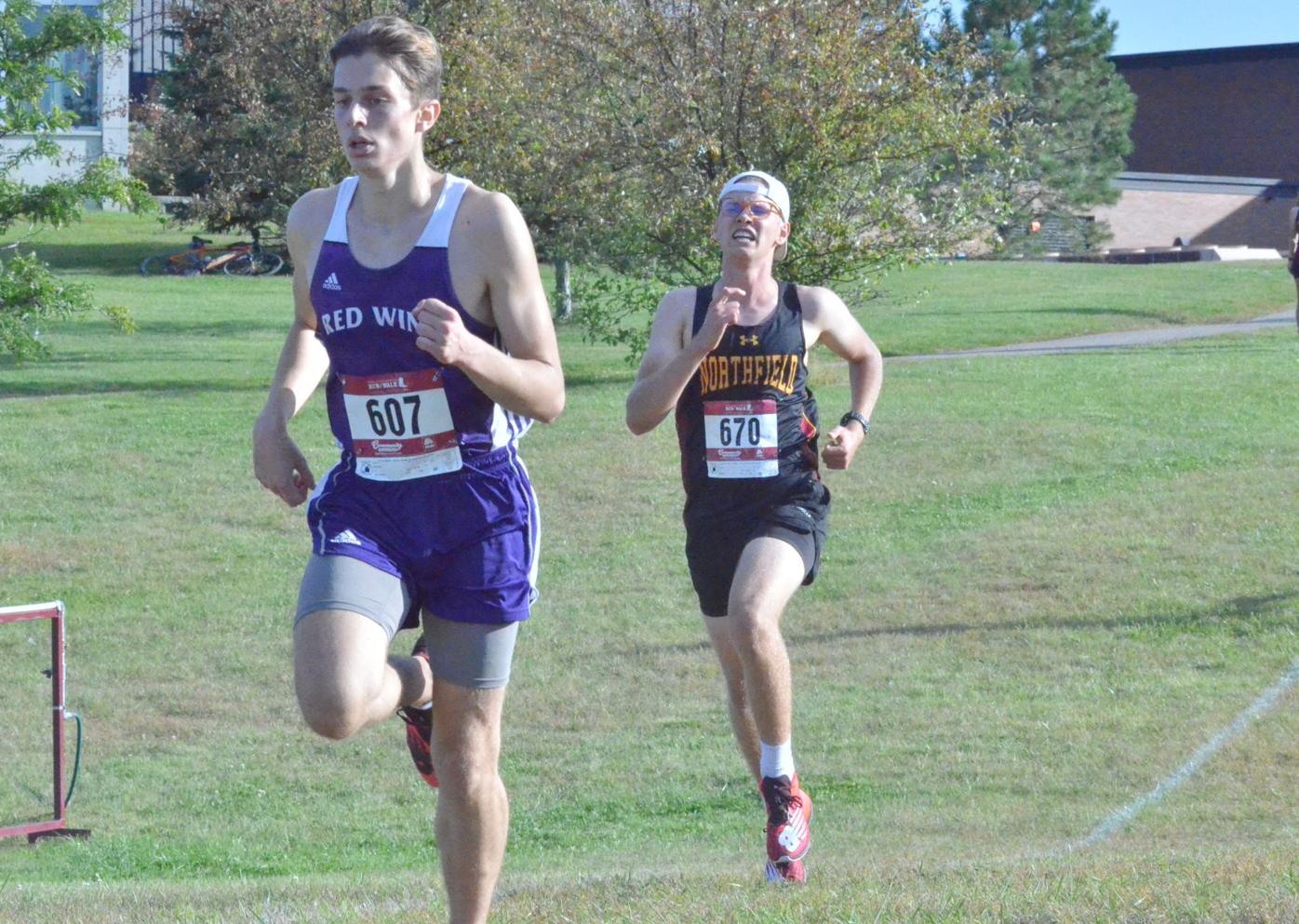 Northfield senior Robby Swenson tracks down a runner from Red Wing on the last stretch of Wednesday’s cross country triangular against Red Wing and Rochester John Marshall. Swenson finished a tenth of a second behind, but still snagged seventh overall. (Michael Hughes/southernminn.com) 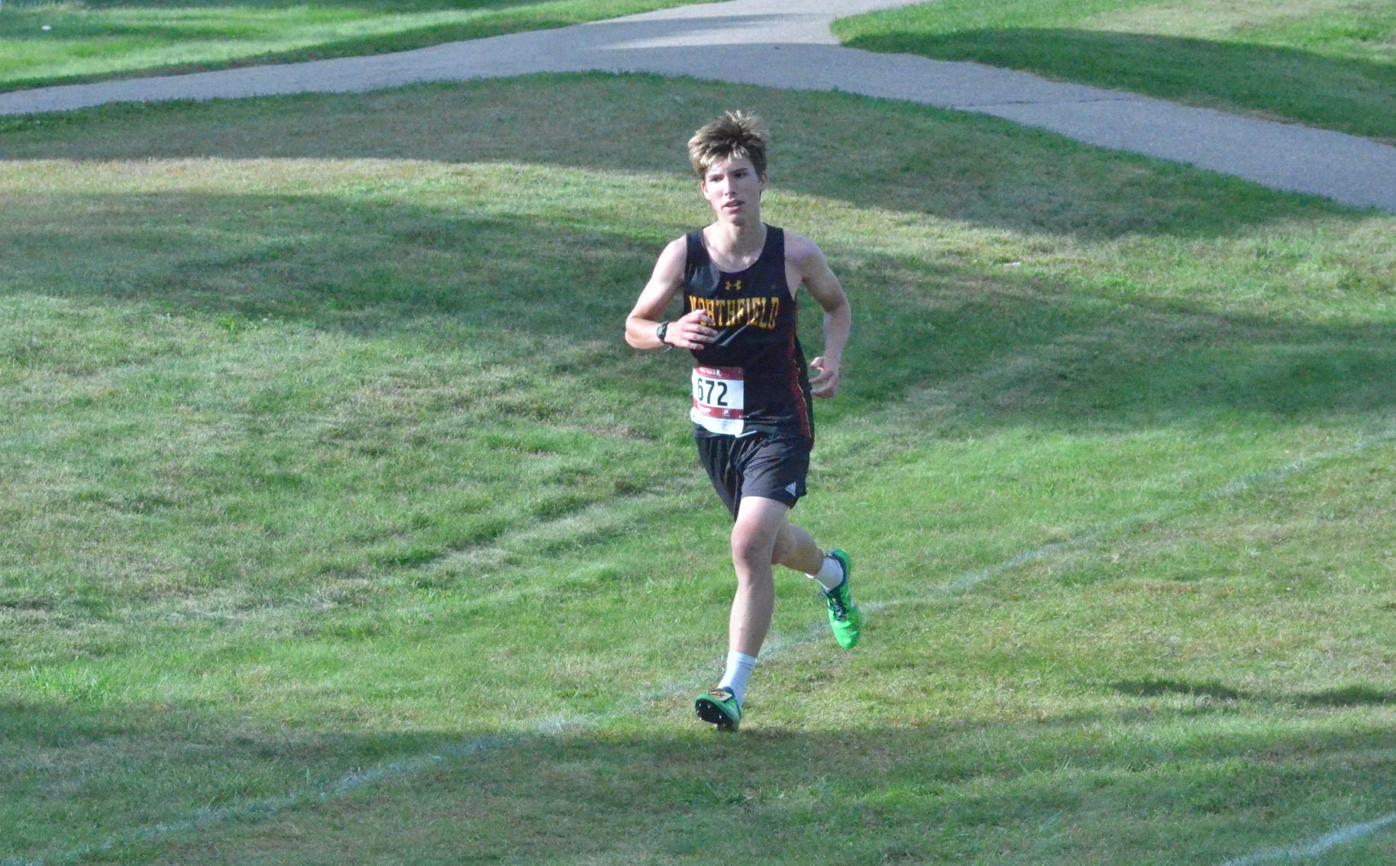 Northfield senior Robby Swenson tracks down a runner from Red Wing on the last stretch of Wednesday’s cross country triangular against Red Wing and Rochester John Marshall. Swenson finished a tenth of a second behind, but still snagged seventh overall. (Michael Hughes/southernminn.com)

What surprised her, however, was the margin of victory, as the Raiders raced to accumulate only 19 points, while the Rockets finished second with 47 points and the Wingers finished third with 60 points.

The reason for the lessened expectations was because Porath knew what her team had gone through in the 48 hours preceding the race. At Monday’s practice, she put the Raiders through five reps of 1,000-meter stretches at the pace she wanted them to run in the race.

Then, Northfield ran a 5-kilometer warmup to Wednesday’s race and another 5-kilometer cool down. The actual race was ran at only 90% speed, per Porath’s instructions.

“I didn’t expect us to look so strong,” Porath said. “I didn’t make Monday’s workout easy by any stretch.”

“Will Beaumaster ran better today on super tired legs than he has all season, so that was fun to see,” Porath said.

The reason for Wednesday’s tired legs is because of Northfield’s new placement in the Big 9 Conference hierarchy. After finishing seventh at last year’s Big 9 Conference meet, there was not a ton of outsized expectations entering this season, even amongst the Raiders.

Then, Northfield started to stack up wins. So far, the only loss is to defending conference champs Rochester Century.

“When we started, no one really had us on their radar,” Porath said. “As we’ve gone throughout the season, we’ve only lost to Rochester Century, and between them and Owatonna, they’re the two favorites in the conference.”

That meant Northfield had some room to experiment Wednesday against a pair of teams that didn’t stack up on paper, and allowed it to focus on training for the future rather than this week.

So, the Raiders went through the gauntlet Monday. How tough that gauntlet was, and how they fared in surviving it, reinforced the belief in their new speed. Brice, the fastest finisher for Northfield in all five races this season, needed to get through each of the 1,000-meter segments in three minutes, 20 seconds.

“He finished one and looked at coach Cardinal and I and goes, ‘These are really fast,’” Porath recalled. “My comment was, ‘It’s because you’re really fast.’”

That speed and extra training will be tested Thursday, when Northfield travels to take on Mankato East and Austin in a triangular in Mankato.

To prevent crowds at the Big 9 meet, the teams will be broken up into groups of three based on regular-season records, so the fastest three teams are in one group, the middle three in another and the slowest three in the final segment.

Owatonna and Rochester Century have two of the three fastest spots locked up, but after the results so far this season, Porath believes Northfield has a chance to snag the third spot. One of the other teams in contention is Mankato East.

“They have runners that are really stacked up one-for-one with us,” Porath said, “so if we can beat them then I think we’ll go into the conference rankings with just that one loss, which should get us that third seed.”