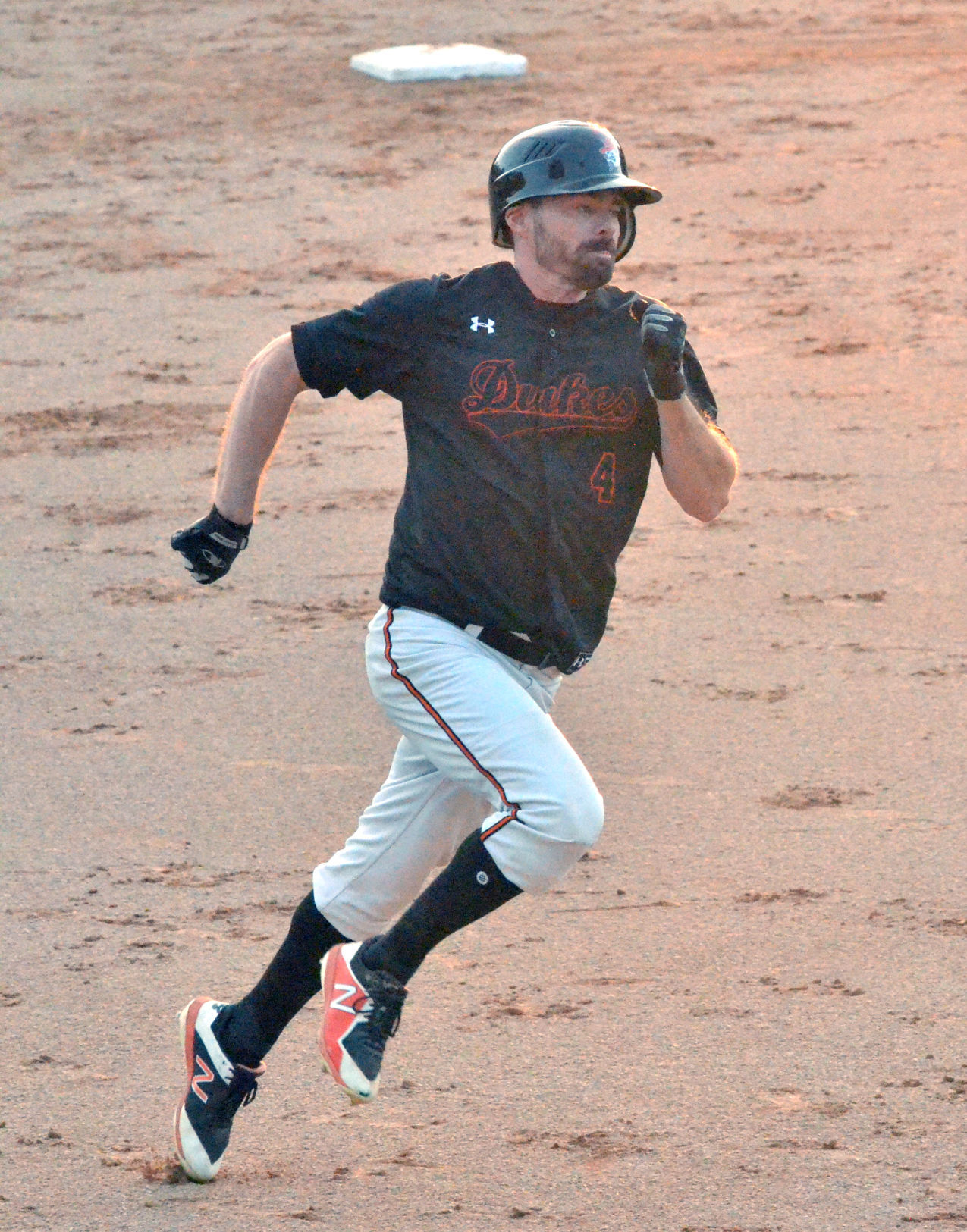 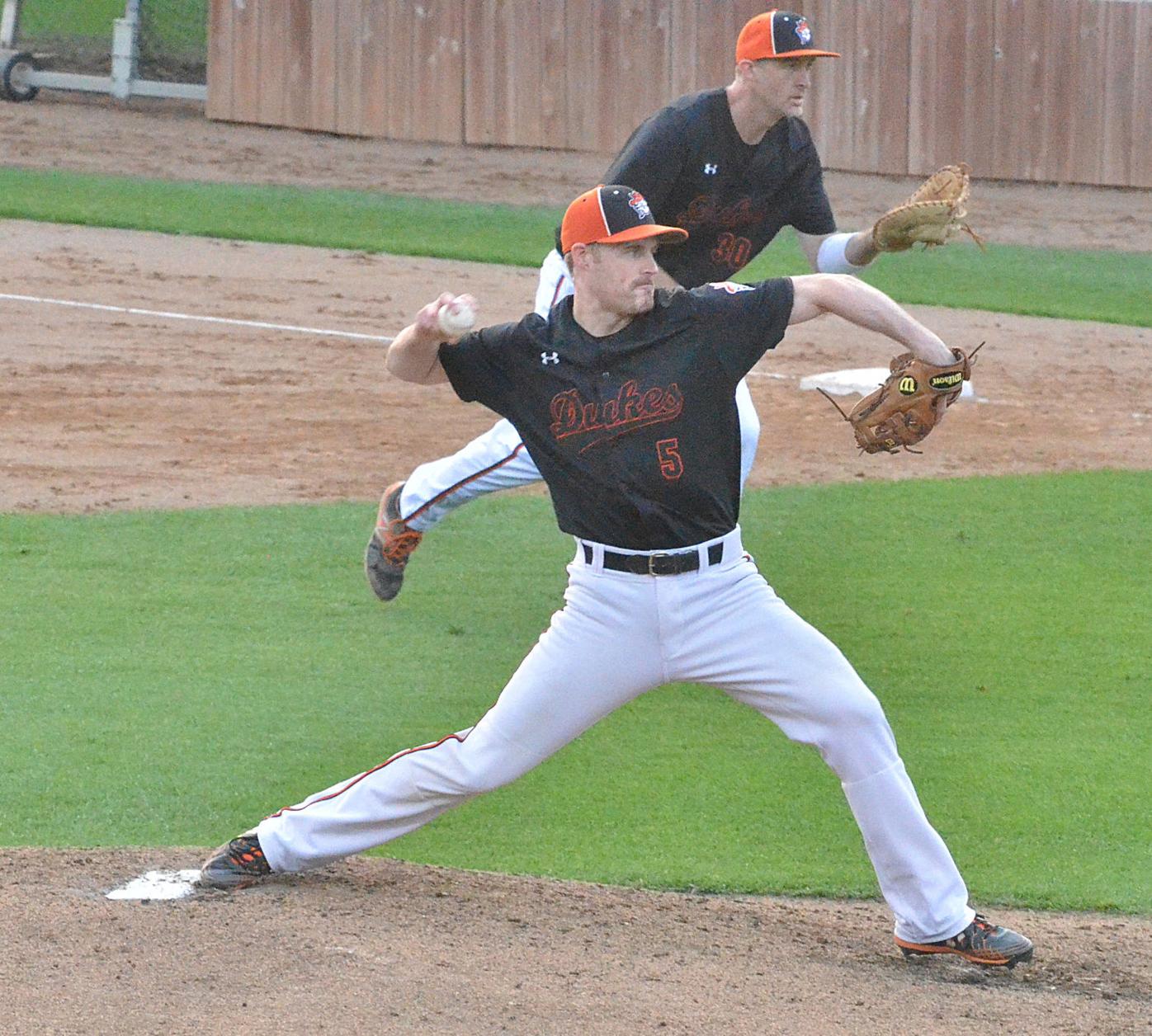 Dundas’ Todd Mathison, No. 5, delivered to the plate as first baseman, No. 30 Matt Ludwig, looked on in Friday’s game vs. Elko. (Mike Randleman/southernminn.com)

Dundas’ Todd Mathison, No. 5, delivered to the plate as first baseman, No. 30 Matt Ludwig, looked on in Friday’s game vs. Elko. (Mike Randleman/southernminn.com)

The Dundas Dukes have played winning baseball for the last two weeks, but for the first time since May, they’re back over the .500 mark.

Dundas won its fifth game in the last six, erasing an early five-run deficit to oust the visiting Elko Express, 8-6, Friday at Memorial Park. The win bumps the Dukes up to 13-12 on the season and 5-5 in Section 1. They were last above .500 overall at 5-4 on May 31.

Keeping Dundas’ momentum rolling meant slowing down one of the state’s top teams. Elko (18-7, 4-3) already owned an 11-1 win over Dundas on June 4 and entered Friday as winners of eight of the last 10. The Express ranked No. 4 in the July 8 Minnesota Baseball Association Class B poll.

“It feels great, especially (against) a good team like that,” said Dundas third-baseman Joey Winters. “They’re a solid team, a lot of older guys and a lot of talent.”

Winters had the game-winning hit in the bottom of the eighth. With the game tied 6-6, the left-hander pushed one to left field. The ball got past the outfielder to allow Winters to stretch a single to second base and to allow Cody Kashmark to waltz home.

Winters didn’t see a lot of offspeed stuff from Elko starting pitcher Kyle Nordby throughout the game, so he zeroed in on a pitch he wanted.

“I just was sitting fastball, honestly,” Winters said. “Luckily, I had a pitch somewhat down the middle but a little outside so I poked it to the left and luckily I hit it hard enough that it went past the left-fielder.”

Todd Mathison started on the mound for Dundas. Elko opened the game with four straight hits en route to three runs in the first inning and two more in the second to lead 5-0.

Mathison quickly found a groove to allow one more run in a six-inning outing where he retired nine straight from the fourth through sixth inning.

Dundas scored three runs in the second inning thanks to a two-RBI Kashmark double and a Haydn Lanoue fielder’s choice RBI.

After the Express got a run back in the fourth, the Dukes responded with a two-RBI Winters single in the home half.

Dundas tied the game at six on a Patrick Wadzinski RBI double in the fifth. That got Mathison off the hook for the loss and allowed reliever Griffin Lanoue to pick up the win.

Griffin Lanoue faced the minimum batters in the final three innings, coaxing a line-out double play to eliminate the lone runner he allowed on a walk to lead of the ninth inning.

Frank Vogel doubled in Dundas’ final run in the eighth.

Eight of nine Dukes’ starting batters reached base at least once. Kashmark and Drew Sathrum led with three hits followed by two for Winters and one for Vogel and Wadzinski.

Mathison allowed six runs (all earned) on seven hits with seven strikeouts, two walks and two hit batsmen. Griffin Lanoue pitched three scoreless, hitless innings with five strikeouts and one walk. He struck out the side in the eighth.

The Express were led at the plate by Andrew Hanson. The leadoff hitter was a triple shy of the cycle in a 3-for-5 night that included a two-run home run to right center field. Chase Hentges also added a pair of RBI singles.

Dundas hits the road for another Region game 2 p.m. Sunday at the Hampton Cardinals. Hampton won the first meeting 8-6 June 11 in Dundas. Mike Randleman is a freelance reporter based in Northfield. © Copyright 2021 APG Media of Southern Minnesota. All Rights Reserved.