What to know: Primary election information 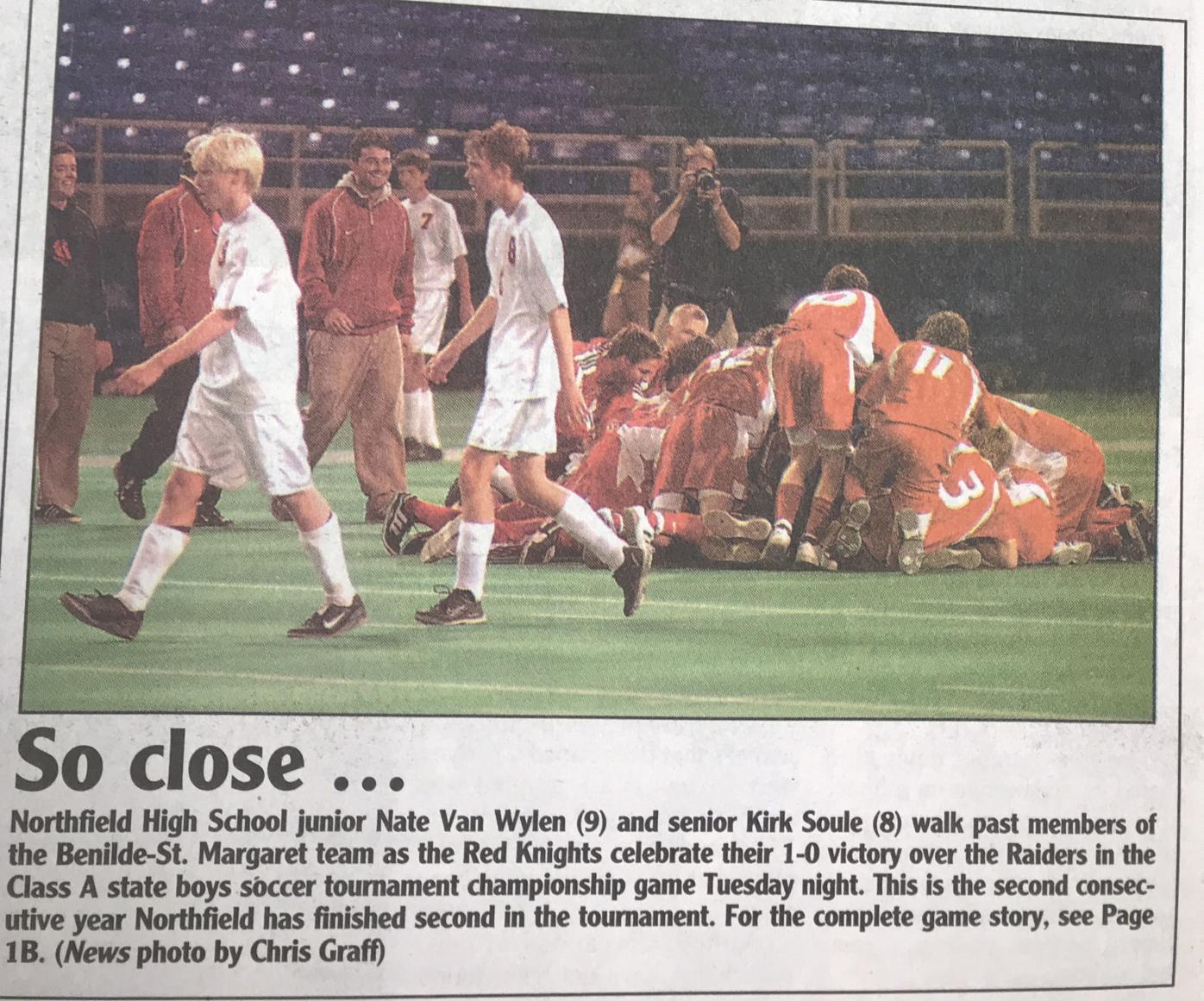 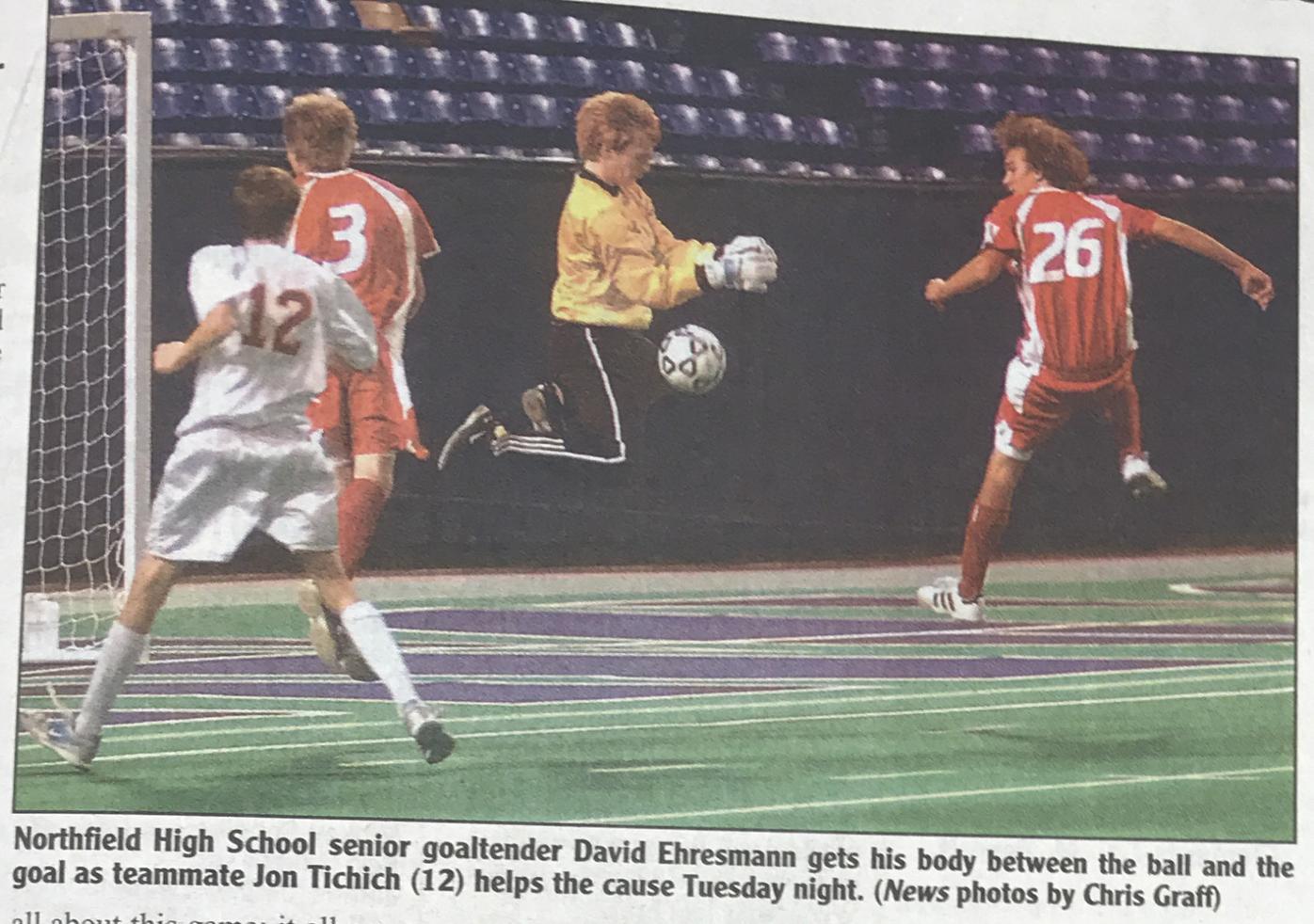 Note: This story originally appeared in a 2003 edition of the Northfield News and has been edited for length and clarity.

A year ago, Northfield surprised Benilde-St. Margaret in the boys soccer state tournament.

There was no surprising the Red Knights in this year’s tournament, however.

The Raiders had some golden opportunities in the first half but couldn’t convert, and Benilde-St. Margaret capitalized on one of the few good chances it had in a 1-0 victory in the Class A state championship game Tuesday at the Metrodome.

But unlike a year ago, when the Raiders stormed onto the scene and were a surprising and somewhat satisfying second, Northfield was none to pleased to finish second best for the second year in a row.

“It sucks being second,” Northfield senior goaltender David Ehresmann said. “We don’t want it. We wanted first. We wanted it all or nothing. It’s a disappointment, that’s for sure. I don’t really know what happened out there. We should have beaten them. We definitely showed them we can play with them. They’re cocky, coming in as the No. 1 team and with us being No. 8. But I know we showed them that public school boys can play, too. It’s not just these private metro teams. We can play, too.”

“We talked already before the game how good we are and how good we can be,” Northfield first-year coach Jorge Zuccolotto said. “And it’s all about this game; it all comes down to this game. How much better we are than last year, all comes down to this game. It’s soccer. And soccer can break your heart. And today it breaks our heart. We’re not happy to be second. We wanted to win it all. But I believe that we still played pretty good. We just made the one mistake, and we’re paying for that now.”

The game-winning goal came just a little more than six minutes into the second half. The Red Knights played a long pass into the Raiders’ box. A Northfield defender was right with a Benilde-St. Margaret opponent as the ball kept carrying. Ehresmann was caught in no-man’s land, and the Red Knights player went up high and headed the ball into the goal.

“They just had the one shot that went in,” Ehresmann said. “That was the difference. I was debating whether or not to go for it as the ball was coming in, but then they were able to get a head on it. Then the ball went the opposite way, and I just couldn’t get to it.”

Benilde-St. Margaret played much better soccer in the second half than it did in the opening 40 minutes, a half which the Raiders for the most part dominated and had a handful of very good scoring chances go by the wayside.

The game’s closest non-goal came with nine minutes to play in the opening half. Junior Anthony Yurek carried the ball into the Red Knights end and played the ball over in front of the penalty box for senior Kyle Holden. The co-captain responded with a bullet of a shot that the goaltender dove for a got a piece of. The ball rolled away from him, however, and trickled over to and hit the post and bounced away.

“I was never happy the whole season with how the guys perform, I always want more,” Zuccolotto said. “But today they gave us everything they had an a really good game. Coming into the game, we thought maybe (BSM) was too good and we couldn’t move the ball against them, but we did. We moved the ball and we created some good chances, but we just couldn’t find a goal again.”

Northfield advanced to the title game with an exciting 1-0 semifinal victory over St. Cloud Cathedral on Monday afternoon.

And the Raiders actually did it with a goal scored in regulation.

Northfield did not score a goal in its quarterfinal shootout victory over Duluth Central, and it appeared that this would again be the case against Cathedral.

But with less than 10 minutes to play in regulation, senior Bryce Thompson came through with the biggest goal of his career, with a rocket of a shot from 20 yards out — and found the upper-left hand corner of the net.

“There was a guy to my right who I had encountered earlier in the game, and I remembered how they always were attacking your good foot, the one you want to kick with,” Thompson said. “I was going to take it left-footed, but I felt that I could kick it with the right. I’ve been practicing that shot that I took, and I ended up putting it in.”

“This is his game, and he knows it,” Zuccolotto said. “He’s been playing indoor soccer for so long, and his game inside here is better than anyone else. When it comes to open field he’s not too fast, but when it comes to short spaces like around the (penalty) area, he can do a lot more. You could see today that he was really doing well out there, and then he really finished it off with a very nice goal.”

As much as Northfield had dominated the game — and with the fact the Raiders had allowed just one goal in seven games — the maroon and gold knew that Thompson’s blast was going to be the game-winner.

“I was so happy,” Thompson said. “It made me feel so good. Our team hadn’t scored in a couple of games. We needed it bad. That was definitely the best feeling I’ve had all year.”